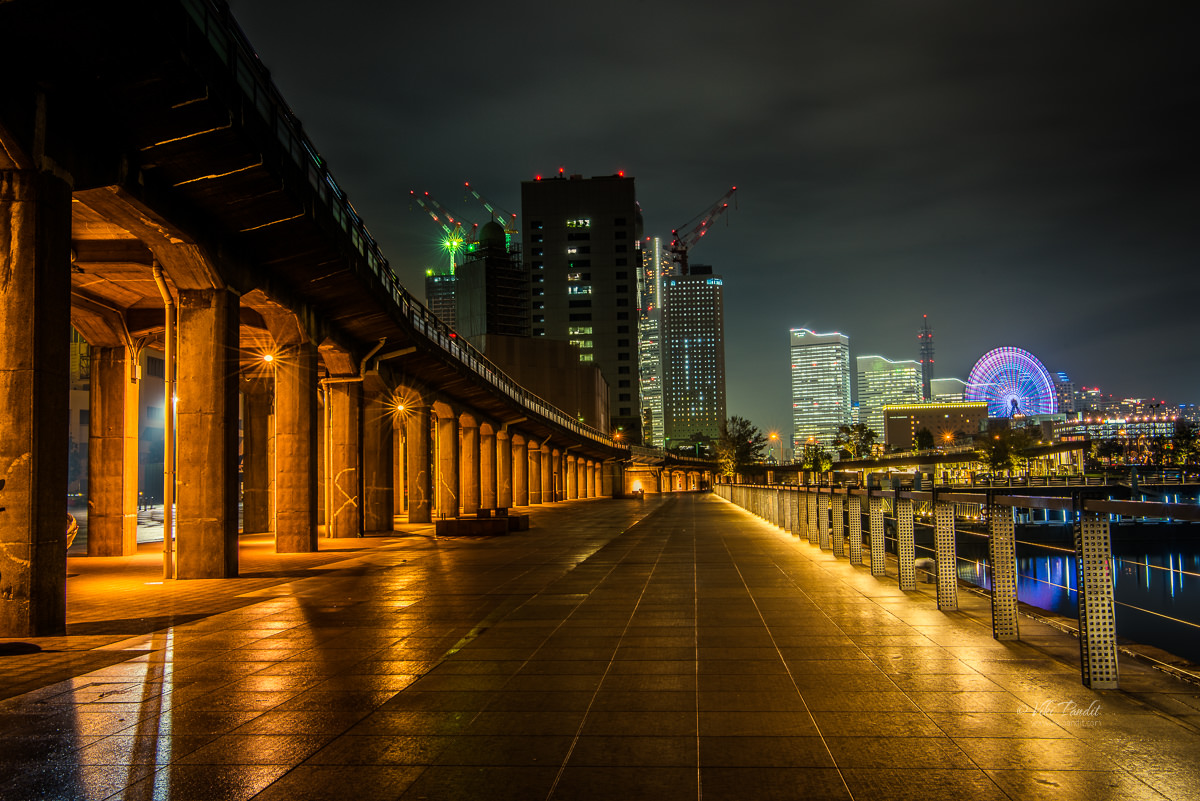 Today we dropped by at one of the most photographed areas in Yokohama – Osanbashi Pier(大さん橋) . The pier was originally built in 1894, but was reconstructed in 2002 as a passenger terminal. Its bold new design incorporates floor boards, with no stairs, beams or posts making it a unique experience with great views of the city.

We were in the Kanto region for a few days. The weather had been a big disappointment. We spent the early part of the day inside malls surrounding Shin-Osaka Station. We found a Book-off store nearby. Its a great place to find old series that are not in publication anymore and, I may add.. in pretty good condition.

The weather didn’t improve much over the afternoon, but Osanbashi Pier was one of the places I badly wanted to see. It is one of Yokohama’s best spots for a walk, with unobstructed views of the Minato Mirai skyline especially in the evening.

How to get to Osanbashi Pier from Shin-Yokohama

After lunch we dropped off our shopping bags back at the hotel and left for the pier. We took the Blue line from Shin-Yokohama Station and got down at Kannai Station. From there it is a 15 minute walk to the pier. JR Passes are not valid on the Blue line. It cost us 270 Yen each for the one way ride. You can also buy one-day passes for the subway.

Osanbashi Pier is located between Minato Mirai and Yamashita Park. Since all three attractions are connected by a pleasant waterfront promenade, Osanbashi Pier is most conveniently accessed by foot from either of the other two sites.

It was already dark by the time we reached the pier. The beautiful lights had come on and it appeared quite romantic except for the drizzle that was still trying to dampen my spirits. I was almost ready give up but Mani egged me on.

It was cold. We walked over to the pier and found us a bench. Luckily we found a vending machines alongside and grabbed us some very welcome warm coffee. The drizzle eventually went away by the time we finished our coffee

I set up my tripod on the left side of the pier from where I was able to capture some lovely images of the Yokohama skyline.

Osanbashi pier has a unique design. Its “roof top” is a huge wood deck with steps, slopes, and benches. It is open to the public. Generally, families and couples visit there and have relaxing time with fresh sea breeze. However very few people had braved the wet weather to be at the pier.

The Port of Yokohama was opened in 1859 as a direct result of the Treaty of Kanagawa, signed by Commodore Matthew Perry of the United States and the Tokugawa Shogunate of Japan. At the time, 2 wharfs were built in place of the present day Osanbashi. The wharfs were too shallow for the ships to dock, and so barges were used to carry passengers and freight to and from the ships.

In 1889, during the Meiji Era, the City of Yokohama was incorporated. The Osanbashi Pier was constructed between 1889 and 1896. Between that time and today it has been damaged many a times.

In 1964, another reconstruction of Osanbashi Passenger Terminal was undertaken to jazz it up before the Tokyo Olympics that year.

Far out one can also see the iconic red brick warehouse at the base of the Minato Mirai skyline. We would be heading there later in the evening.

After taking a few pictures, we walked over to the eastern side of the pier. The wet wood was still glistening from being wet.

As we stood admiring the wide open bay, a Royal Wing Bay Cruise ship came along making its rounds in the bay. One of the best way to feel this Bay City’s charm is by joining this cruising tour. The ship serves a variety of dishes, and follows it up with amazing views of the bay area.

We didn’t want to stay for long in the anticipation that the rain would be back. As we walked back we found ourselves in front of the gate of the passenger terminal. Most of this area was constructed between 1987 and 2002, to meet the modern demands of the port.

This newly reconstructed passenger terminal is named the Osanbashi Kokusai Kyakusen Terminal. It can accommodate up to four 30,000-ton class ships or two 70,000-ton class ships at the same time. The pier has a terminal building which houses checking counters for passengers, customs, immigration, souvenir shops, coffee shop, information counters and a restaurant.

Once I was done taking pictures of the Yokohama skyline, we made our way towards the dazzling lights of Minai Mirato across the Zo No Hana Park. In this park there is a new installation of a series of vertical light panels in a curved line that gradually increase in size.

On the left one can see the Yamashita Lingang Port Promenade. It is a boardwalk that connects the New Port District of Yokohama City Naka Ward directly with Yamashita Park. Yamashita park was just behind us but it was too late to head there. One really does need a full day to explore the area. Anyways, we walked briskly towards the Red Brick Warehouse.

The Red Brick Warehouse (Aka Renga Soko) is a pair of landmark buildings, with an artsy shopping center, banquet hall, and event grounds. It is located right next to the port in the Minato Mirai district of Yokohama.

The bold vibe of the Red Brick Warehouse is quite unique in nature to anything I have seen in Japan. The are two buildings running parallel to each other, with an open courtyard-like area in between. It is a good place for souvenir shopping. For those looking for a more substantial dining plan, there are also some larger, sit-down restaurants.

The two buildings were constructed in 1911 and 1913 meant to be used as customs buildings for the nearby harbor. They survived the Great Kanto Earthquake of 1923, requiring just some basic repair and restoration. The buildings were requisitioned by the Americans during WWII, but were returned to their original use after the war, and continued serving as customs houses until 1989.

In 2002, they were repurposed into a shopping mall. Each building, as well as individual shops, operate on their own hours and holidays, so there is no universal schedule. Most shops open between 10-11:00 am and close by 7 – 8:00 pm.

Walk back to Kannai Station

It was 9 pm. We started our walk back to Kannai Station. We were tired from walking all day. On the way I got this last incredible close-up shot of the Landmark Plaza. I can certainly say that the more I roam around this area, the more angles I can get. But this would be enough for today.

Yokohama bay area is like a feast for the photographers. I would love to come back some time during the day to capture other parts of the area.

Places to see near Yokohama