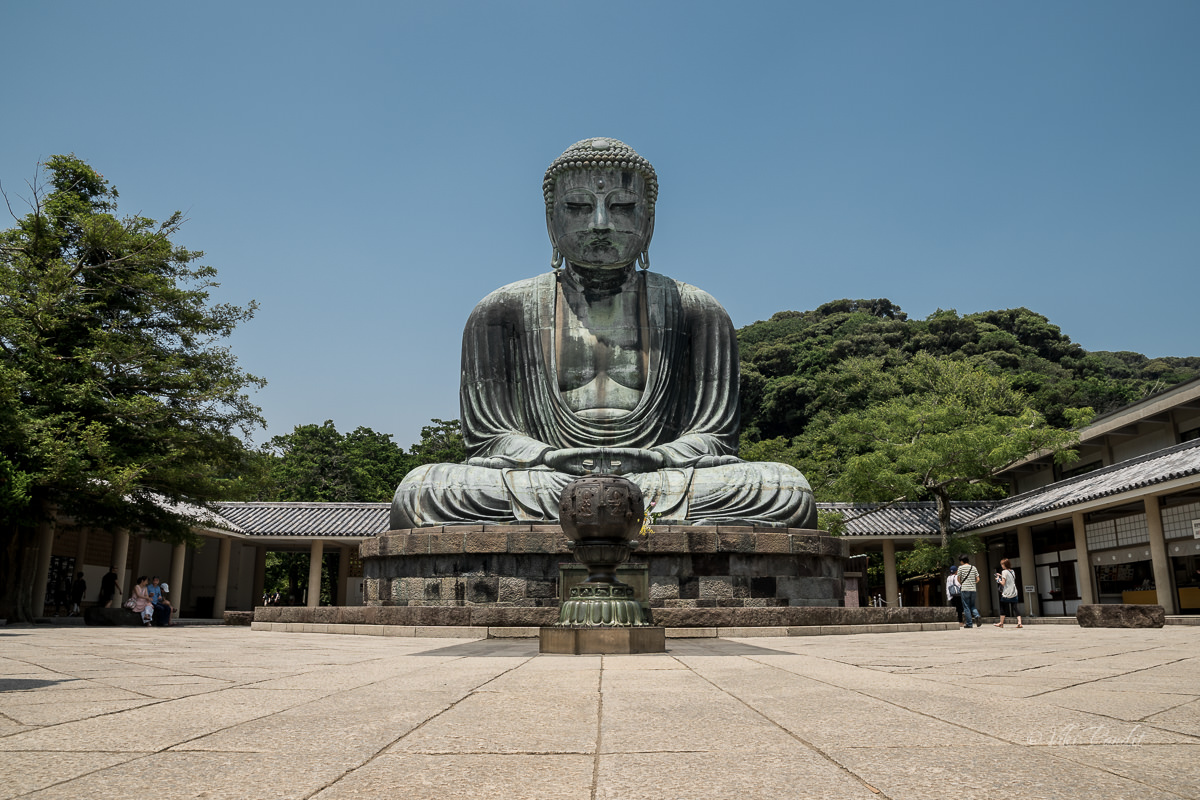 Today I went to visit the Great Buddha of Kamakura. It is a monumental outdoor bronze statue of Amitabha Buddha at the Kōtoku-in Temple in Kamakura of Kanagawa Prefecture. According to temple records, the statue dates from around 1252 CE, in the Kamakura period. It is now designated as a National Treasure of Japan.

My JR Pass was still active. The train pass has been incredibly helpful for travelling to faraway places in Japan without incurring much expenses. I stay in Nara, which is almost 500 km away from Kamakura – but armed with my JR Pass – not too far away!

The ride from Nara to Kamakura

The weather had been gentle in the last week. Rains had kept away for most of the time but there was a strong haze around, hiding away any chance of blue skies. I left my dorm at about 8 am -ish and walked all the way to JR Nara Station. From Nara I took the local Nara line to Kyoto. From Kyoto, I boarded the Tokaido-Sanyo Shinkansen to Shin-Yokohama Station.

From the Shin-Yokohama Station, I had to take the local to Yokohama Station, which is about 4 stops and then to Kamakura Station. I had been in the area before, so even though I had to change a few trains, I didn’t face any problems on the way.

From Kamakura Station, I caught the Enoden train (a shortened form of the actual Japanese name “Enoshima Dentetsu”) that connects Kamakura to Enoshima. The train looks more like a tram or a street car. You can buy tickets for the train at the ticket vending machine.

I have a thing for trains and it was incredibly nostalgic boarding one of the older train models during this visit to Kamakura. It was a Thursday and yet the train was fully occupied. I wonder what happens on weekends.

I got down at Hase Station(pronounced Ha-say) , which is located closest to the Kamakura Daibutsu and Hase-dera. Overall, it took me about 4 hrs to finally reach my destination. Hase is the most popular station on the Enoden line, and also the busiest. At any day of the week, you will find a number large tour groups, making their way to the heritage temple.

Please note that the Enoshima Dentetsu line is not covered by the Japan Rail Pass.

If you do take this ride, then you can purchase the one day pass which costs about ¥600. If you are only planning to go and come back, the single ride tickets costs ¥190 each way.

After a quick walk for about 10 minutes I found myself at the Niomon gate of Kōtoku-in. The temple gate holds a plaque inscribed with Kōtoku-in ’s official name “Daii-san.” Originally, the gate was not constructed here. It was moved together with the pair of Nio statues, enshrined inside the gate, from another location. After the damages from the 1498 earthquake, it was reconstructed in the beginning of the 18th century.

The Niomon Gate has two Nio guardians guarding the temple. If you like to read in-depth on Nio Guardians, please read my research on the aggressive looking temple guardians.

A few steps inside you can find the ticket office. The admission tickets cost ¥600 per person.

“Stranger, whosoever thou art and whatsoever be thy creed, when thou enterest this sanctuary remember thou treadest upon ground hallowed by the worship of ages – This is the Temple of Buddha and the gate of the eternal, and should therefore be entered with reverence.“

A notice at the entrance to the grounds reads …

The first structure that you encounter as you enter the temple premises is the Chōzuya.

A chōzuya is a Shinto water-filled stone basin for the ceremonial purification rite known as temizu. Wooden dippers are usually available to worshipers for washing their hands, mouth and finally the handle of the water ladle to purify themselves before approaching the main Shinto shrine. This symbolic purification is normal before worship and all shrines have this facility. After washing my hands, I went forth towards the monumental statue.

The Great Buddha of Kamakura (Daibutsu in Japanese) is a monumental outdoor bronze statue of Amida Buddha. Seated serenely in the grounds of
Kōtoku-in, a Buddhist temple of the Pure Land sect, the Great Buddha is one of the iconic images of Japan.

With a height of 13.35 meters, it is the third largest seated Buddha statue in Japan. Showa Daibutsu in Aomori is the tallest at 21.35 meters. The most popular Great Buddha at Todai-ji in Nara comes second at a height of 14.98 meters.

How Kamakura Buddha came into being?

The current Bronze statue was preceded by a giant wooden Buddha. That wooden statue was damaged by a storm in 1248, along with the hall containing.

The Kamakura period (1185–1333) is a period of Japanese history that marks the governance by the Kamakura shogunate, officially established in 1192. When the Great Buddha Statue of Todaiji in Nara Prefecture was reconstructed in 1195, Yoritomo Minamoto, the founder of the Kamakura Shogunate, participated the inauguration together with his wife Masako.

Seeing the colossal statue, he felt an obsession to build a matching one in Kamakura to demonstrate his power. But his wish never came true as he died four years later in 1199.

Bronze statue of Amitābha Buddha at the Kōtoku-in Temple

Yoritomo’s court lady named Inada (Inada-no-Tsubone) , however, tried to materialize Yoritomo’s wish. She obtained an approval from Masako to go ahead with the project and asked Priest Joko, to travel across the country in search of donations.

According to chronicles of the Kamakura shogunate, work on building the Great Buddha at Kōtoku-in began in 1238. Lady Inada (Inada-no-Tsubone) and the Buddhist priest Jōkō of Tōtōmi,deserve special mention as it was due to their special efforts in raising the funds that the construction of the statue was made possible. The wooden statue was finally completed in 1243 CE.

It was a time when Kamakura was the capital of Japan and the commencement of the statue in brought much joy to the shogunate. The military rulers of Japan embraced Buddhism and established many temples around their new capital to provide spiritual sustenance for the elite and the samurai warriors who served them.

The Kamakura period rearranged the landscape and gave birth to Buddhism for the commoner. It is this period that we see the spread of Buddhism among the illiterate commoner and a new spirit of realism in religious imagery. The period gave birth to new and reformed Buddhist movements — Pure Land, Zen, and Nichiren — devoted to the salvation of the common people.

Unfortunately, it was completely wrecked by a violent storm in 1247. Priest Joko put forward the idea of the stutue to be recreated in bronze. Five years later in 1252, thanks again to the fund-raising campaign by Lady Inada and Priest Joko, construction of a new statue, not a wooden but bronze one this time, began with caster Hisatomo Tanji and Goro-emon Ono.

It took them more than a dozen years to finish up. The Great Buddha Statue we see today in the Temple is the one made at that time, though the exactly time of completion remains obscure. Distinct from the statue in Todaiji is that the Statue here was built totally with the funds donated by the devotees and well-wishers, with no government or official aid whatsoever.

The bronze Buddha was originally covered in gold and housed in the Great Buddha Hall, or Daibutsuden, but the structure was damaged by typhoons in 1334. It was rebuilt only to be completely damaged yet again by another storm in 1369. The last building housing the statue was washed away in the tsunami of September 20, 1498 resulting from the Meiō Nankaidō earthquake, during the Muromachi period.

The newly constructed building was severely damaged once more. But, the Statue was all right. Back at the time, the government was no longer in Kamakura but in Kyoto under the Ashikaga Shogunate and they didn’t provide any funding for re-building the hall. Since then, the Great Buddha has remained seated in open air.

The Amida Buddha sits in the dhyana mudra. Dhyana mudra involves using a gesture where the hands are placed on the lap, the right hand on top of the left one, palms facing upward. In Buddhism, this mudra is dispalyed with the tips of the thumbs touching. This shape of a triangle represents the three jewels of Buddhism: Buddha, sangha (community) and dharma (teachings).

To commemorate Lady Inada’s contribution, there is a cenotaph dedicated to her, standing in the courtyard.

The statue is hollow, and visitors can view the interiors. You can take a short walk through the opening to the right of the Buddha and walk up a set of stairs to check out the dimly lit hollowed feet and chest area.

The inside is a tight space and only a few people can cram inside to explore the tiny room, but it is full of extra tidbits on the construction and maintenance of the otherworldly structure. From inside, you can see the giant plates of bronze layered underneath using a technique called ikarakuri. Some visitors have also left graffiti on the inside of the statue.

The Great Buddha is seated in the lotus position with his hands forming the Dhyani Mudra, the gesture of meditation. With a serene expression and a beautiful backdrop of wooded hills, the Daibutsu is a truly spectacular sight.

Bronze statue of Amitābha Buddha at the Kōtoku-in Temple

Behind the Great Buddha sit four bronze lotus petals. These were cast in the mid-Edo period (1603–1867) with the intention of creating a lotus pedestal for the Great Buddha. Though the original plan was to cast 32 petals, only four were actually completed. The donator’s name are inscribed on the front of each petal.

The most recent restoration work was undertaken early this year.

On the inside wall of corridor to the right facing the Great Buddha rest a pair of huge warazori weighing about 45 kilograms each – a gift from the Matsuzaka Children’s Club of Hitachi-Ota City in Ibaraki Prefecture. The warazori were first woven and donated by the children in 1951, at a time when Japan was still recovering from the ravages of World War II. The warazori were created with the wish that “the Great Buddha would don them to walk around Japan, bringing happiness to the people.”

The Matsuzaka Children’s Club have kept this tradition alive to this day: since 1956, they have continued to make these giant warazori and present them to Kōtoku-in once every three years.

In the mid-19th century, artist Ando Hiroshige (1797–1858), who produced some of Japan’s most famous woodblock printed landscapes, paid homage to the image with a print, naming it after one of the later temple halls of the
Kōtoku-in, the Shojosen-ji. Later in the century, British writer Rudyard Kipling visited Japan and was so awed by the sculpture that he penned a poem dedicated to the Buddha at Kamakura.

While walking back I caught this final image of the bronze statue that brings in millions of believers each year.

Overall, it is a nice place to visit if you are looking to spend some time among old heritage structures. I would recommend that you visit the temple on weekdays. Weekends are extremely crowded.

Thanks for reading. I look forward to your reviews and questions. If you are looking to explore more of the Kanto region, follow my story as I visit the Hase-dera Temple in Kamakura .

Places to see near Kamakura