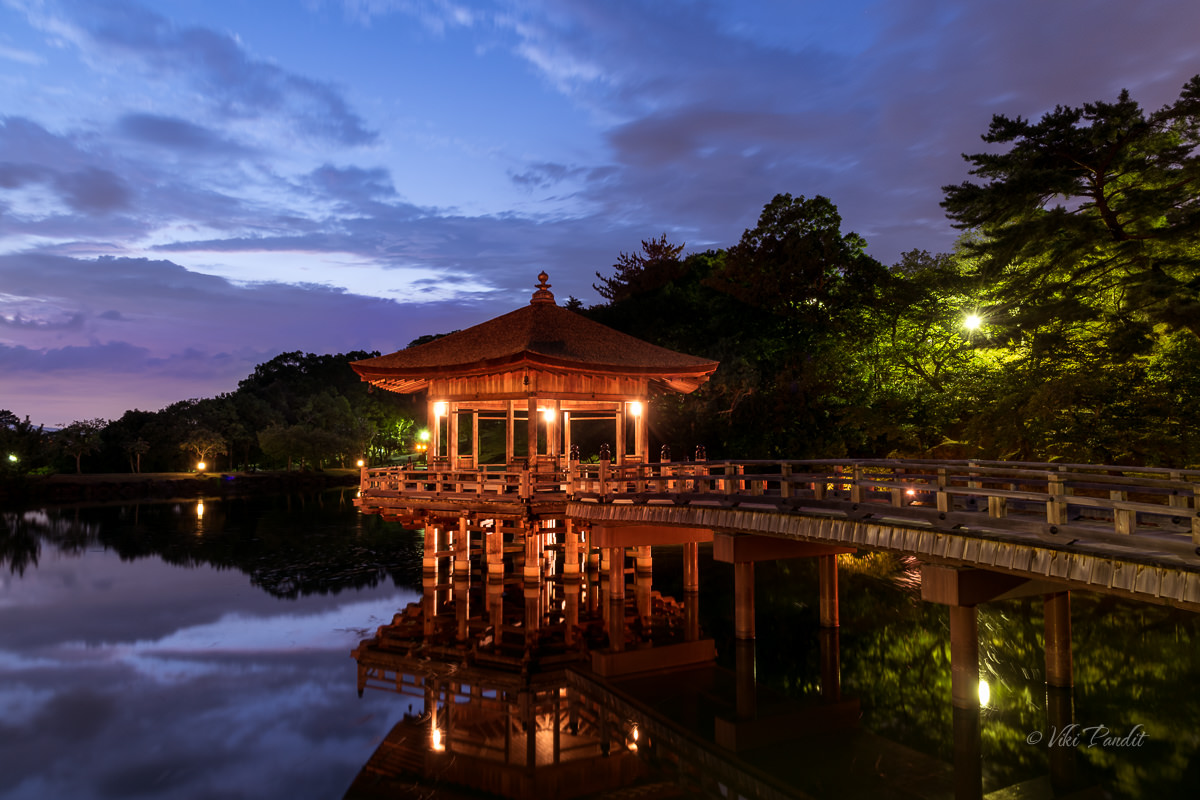 Ukimido is a hexagonal gazebo over the Sagiike Pond in Nara Park. The park is generally crowded with tourists all through the day, but they usually stay away from this area. The airy structure in the middle of the pond, surrounded by herds of deer, is one place where I can find peace any time of the day.

I have been to Ukimido in Nara several times before but never during evenings. A few days before I came across a flier at the Nara Tourist Information Center that had a cover photo of the pavilion at night. It looked so immersive that I couldn’t miss photographing this lovely gazebo.

So, at around 5 pm I walked down to the park. I had with me some acorns that I had gathered at Nagoya Castle grounds. The deer love munching on these acorns.

On my way I went past the meadows beside Todaiji temple where the deer were busy munching on green grass. I was a bit surprised to see so many gathered at a single place. A couple came running towards me hoping to get some tidbits. I fed them the acorns I had stuffed in my cargo pockets. The sun was on its way down, so I hurried towards the floating pavilion.

It was almost sun down by the time I reached the pavilion. Some elderly ladies were sitting inside the dimly lit structure. The sunset was playing its magic creating a blend of purple and orange sky.

I stayed around till the ladies moved away after having their fill of the enchanting surroundings. During the summer evenings the floating pavilion is illuminated and it feels very relaxing sitting in the center of the pond amid dimly lit lanterns. I took a few shots of Ukimido Pavilion until the sun had fully set.

Once I was done taking pictures, I went back the along same path towards home. With the fall due in a month, some of the trees had started to turn red already. The lanterns along the Sagiike pond lit up the trees casting a reddish glow over them.

Walking in Nara Park at night

Nara park is lovely in the day, but its mesmerizing at night. If you are in Nara, try to visit the place at night. Kofukuji and Todaiji grounds remain open all night. The five-story pagoda at Kofukuji looks like a painting with the moon rising behind. The Todaiji temple closes at around 5-5:30 pm depending on the season but you can still enjoy the beautifully lit park surrounding the temple. On certain days Todaiji does remain open during nights. I was lucky to visit Todaiji on New Years Eve, one of the rare times when the temple is opened to public at night.