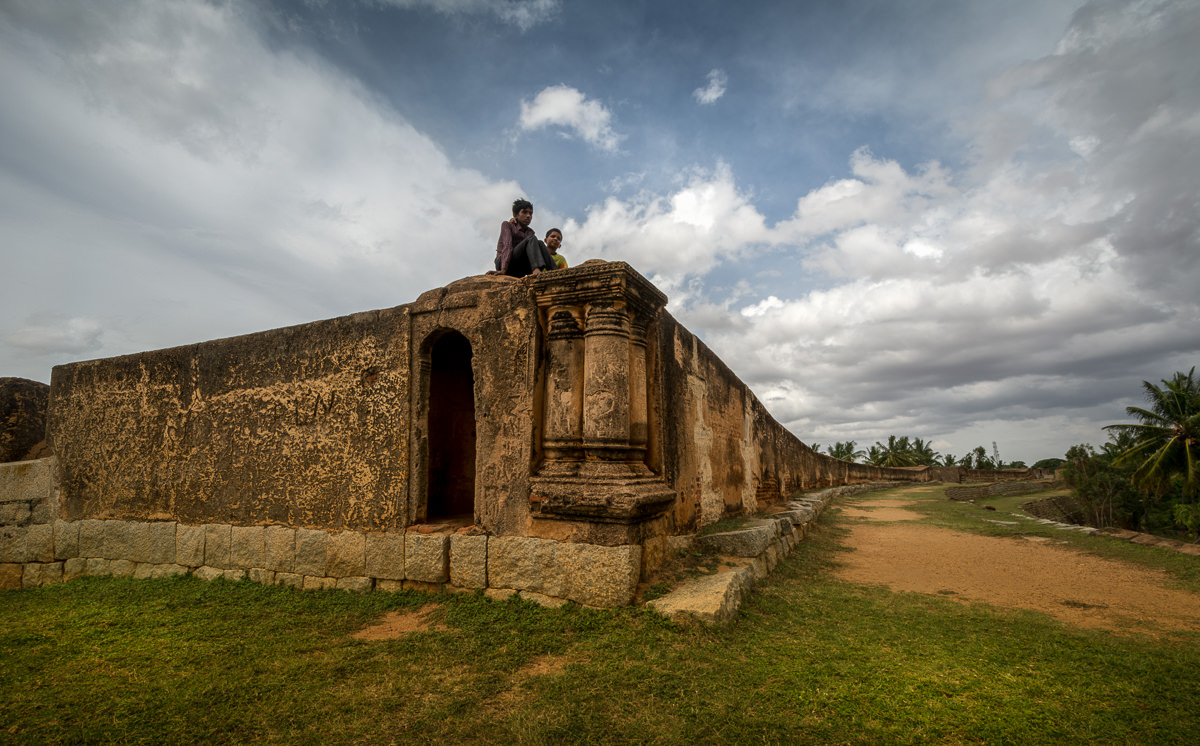 Today I visit one of the oldest flat-land forts near Bangalore. The Devanahalli fort was built many centuries back in 1501 CE, but the most recent fortification was enabled by Hyder Ali which gave the fort its current look.

A tale written in blood

Devanahalli is a small town on the outskirts of Bangalore not more than 40 mins away on the NH7 Highway, very close to Kempegowda International Airport. Devanahalli Fort is one of the rare forts in Karnataka to be built on flat ground. Because of this very structural weakness, it has seen many rulers since the 1500’s.

The original name of Devanahalli was Devanadoddi, dating back to the 15th century. The fort was originally built in 1501 by Malla Baire Gowda, son of a refugee from Kanchipuram in Tamil Nadu during the rule of the Vijayanagara empire. According to local tales, a group of refugees settled from conjeevaram (present Kanchipuram), near the foothills of Ramaswamy betta. The chief of the tribe Rana Baire Gowda, heir of mosaru wokkalu community, looking for a harmonious settlement for his people was the first to identify the fort location.

At that point in time, the fort was made of only mud structures. It remained under the control of Malla Baire Gowda’s descendants till 1747, when the Wodeyars of Mysore, under the command of Nanja Raja, attacked and occupied the fort. Subsequently, a few years later Devanahalli was usurped by the Marathas.

Eventually, the fort was taken over by Hyder Ali and his successor Tipu Sultan. It was during the reign of Hyder Ali that this fort was converted from mud to the present stone fort. Finally, in 1791 the control of the fort passed to the British under Lord Cornwallis. Throughout its lifetime, the fort has navigated through several dynasties from the emergence of the Vijayanagara empire to the advent of the British.

I stay in the Bannerghatta area and it is a long way away from Devanahalli. I woke up at dawn and by 5 a.m I was out on the road looking for a bus. It didn’t take long for one of the air-conditioned buses to come along. The bus dropped me off at the Majestic Bus Stand. I was pleasantly surprised when I realized it just took me 30 minutes to reach majestic. On a regular day, during office hours it usually takes around 2 hours to reach there, such is the beast – the Bangalore traffic!

At the Majestic bus stand, I didn’t have to wait long for a public bus to Devanahalli. On the way as I was passing the wide toll road stretch, I saw the sun looking like a golden ball on the horizon rising in the background of a bunch of teak trees. The bus dropped me off at the eastern gate of the fort. I was surprised to see the inside of the fort encroached by small slum-type houses. I had to walk some 10 mins to get to the western gate where you can find what remains of the fort. The road goes – bam, through the heritage site. You can also find dozens of monkeys loitering around.

The ruins of a fort

The fort is spread over an area of 20 acres. The roughly oval-oriented Fortification veneered with dressed masonry has about 12 semi-circular bastions at regular intervals. If you are coming by your own vehicle go there directly. There is no parking lot. visitors just park their vehicle outside in front of the western gate.

The west entrance of Devanahalli Fort

On the insides of the entrance gates, one can see some intricate artwork.

The interior of the western gateway

There is a gate on the left, right after the entrance gate that leads to the fortified walls built in brick and lime.

As I walked along the caponier, I could easily make out the rot that has settled in. From the top, you can clearly see a full human settlement inside the fort. Most heritage buildings inside the fort have already been demolished to build their residences. The remaining few are being used as residential units. The house of Dewan Purnaiah, a high-ranking official in Hyder Ali and Tipu Sultan’s court, is also located inside the fort.

The 500-year-old heritage structure is slowly weathering away due to the neglect and apathy of the government. The walls of the fort have developed cracks in many places and parts of it have also collapsed. The locals living inside the prohibited/protected area in the immediate vicinity of the fort are the main culprits. There are small channels along the inner fort walls that allowed water to drain out of the ramparts, thus reducing seepage into the structure.

The walkway above the fortification of Devanahalli Fort

The small doorway you see above is a small room, created to hold a single soldier at best. It was created for whence attacking troops would somehow scale the action, the soldiers from inside would use spears to attack them, staying protected inside.

All along the caponier, gun points are provided at regular intervals through which soldiers could shoot at the enemy, staying hidden. At many points along the wall, the top layer of cement has come off exposing the carcass of red bricks inside.

Gun points built into the rampart of Devanahalli Fort

The soldiers used to shoot from these gun points, sometimes also pouring burning oil for here to stop soldiers from climbing the walls

Inside the fort are age-old temples dedicated to Venugopalaswamy, Ranganatha, Chandramouleshwara, and other deities. The fort area is also known to consist of several sites and structures resembling watch towers, housing, and defence buildings.

Tipu Sultan is said to be born in the fort town of Devanahalli. You can find a memorial of Tipu Sultan located beside the historic fort. Known as the Khas Bhag, it lies inside a garden full of tamarind and mango trees.

Even though Hyder Ali provided Tipu with the best available education, he turned out to be a tyrant. Some political needs to vote-bait the Muslim community in the 1990’s tried to white-wash his hatred towards the Hindus of this land, but written records passed down the years tell a different tale. He made no secret of his hatred for Hindus. After his death in 1799 in the Fourth Anglo-Mysore War and the fall of his capital Srirangapattana to the British, Colonel William Kirkpatrick discovered more than 2000 letters in his palace written in Farsi in Tipu’s own handwriting. In these letters, Tipu refers to Hindus as “kaffirs and infidels,” who needed to be “cleansed (or converted) if the rule of Islam is to be firmly established in India.”

Here again, you can see a small room going down. it could fit a single person for an attack from behind if enemy soldiers would scale the fort.

Like many Muslim rulers who have changed Hindu names of places to rewrite history, Tipu tried to rename Devanahalli as Yousafabad but it never caught on.

As I walked further towards the eastern end, you can see more misery. The fort watchtower, almost in obscurity, is in dire need of preservation. This used to be the watchtower of the fort, now mostly in ruins. The building used to be a lot higher, so it could give a good reconnaissance of the surrounding area in case of an attack.

These pictures are just from the northern side of the fort. The southern side is completely in ruins. There is a row of steps to walk over to that side, but the area is full of wild vegetation and you cannot walk up there.

Steps leading to the southern part of Devanahalli Fort

After spending some time at the fort, I explored the surrounding area. There is a small hill with a Jain temple at the peak. There are also some lovely boulders in the area photographers might be interested in.

Eventually, I walked back to the bus stop and caught a bus to Majestic Bus Station. I was back home by around 12 noon.

With the rapid growth in the population of Devanahalli, urbanization has wrapped its arms around this heritage site, threatening its cultural charm, and its very existence. Locals indulge in intense vandalization by writing names on the wall of the remaining structures. Today the heritage site silently watches as cars whiz by on NH-7. According to residents here, tourists nowadays rarely visit this historic spot.

It seems in the expansive demand for space, the local history and its significance have become minuscule and nullified by the ferocious wave of urbanization. I hope this article can encourage some to take steps to save the fort so that it retains its originality and serves as knowledge for future generations to understand the local history.

How to reach Devanahalli Fort?

From Bangalore, the fort can be easily reached in 40 minutes. It lies very close to the Kempe Gowda International Airport. I took a bus from the Majestic bus stand, It cost me Rs.24

Can I use Tripod to take photos?

Even though the heritage site is abused extensively, the caretaker will not allow you to take photos using a tripod.

What is the admission fee to enter Devanahalli Fort?

Entery to Devanahalli Fort is free

Is there any camera charge?

There is no camera charge.

How much time does it take to fully explore the Devanahalli Fort?

It hardly takes an hour to explore the remains of Devanahalli Fort. Recently one of the bastions on the northern side has collapsed. Please take adequate care when climbing the stairs. 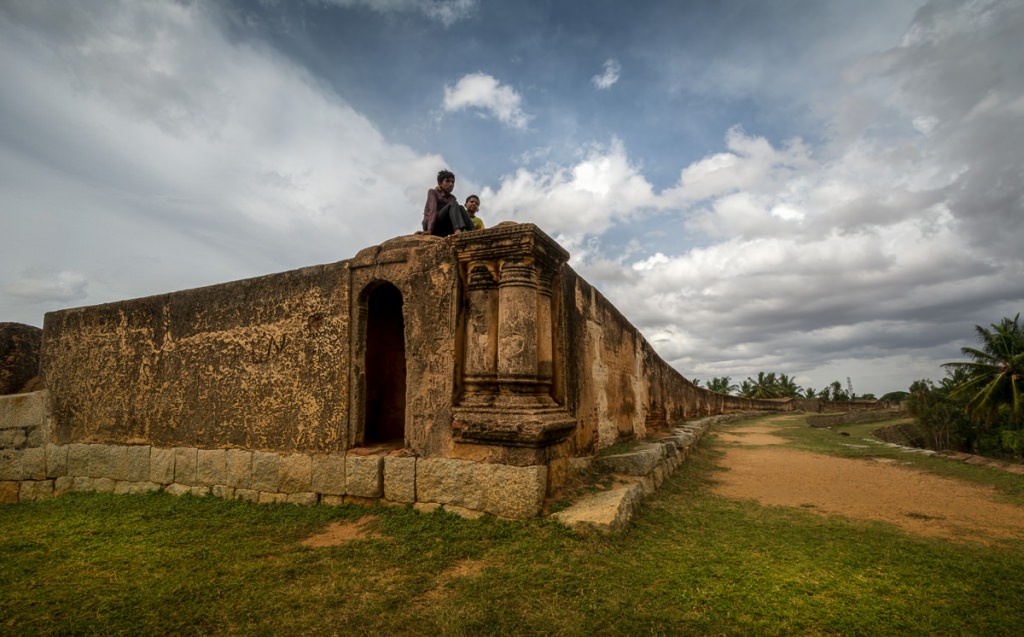 Places to see near Bangalore