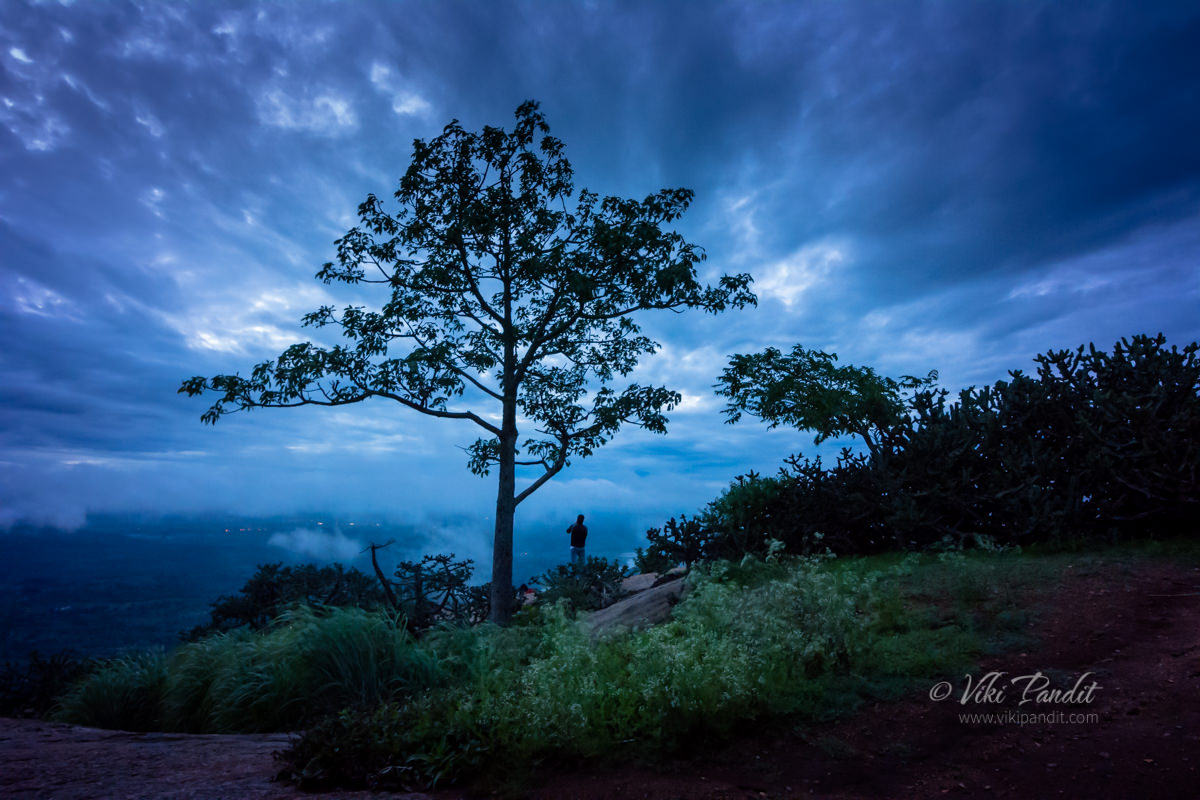 Savandurga is an amazing place for a photo-op… but Whoa! the fort of “death” and that too on my first trek!!

Located at a distance of 64 km west of Bangalore, Savandurga is reputed to be the highest monolith in Asia. It comprises two looming granite hills, Karigudda, the Black Hill and Biligudda, the White Hill, both around 4000 feet tall. Historically, the hills find a mention in the records of the Hoysala period in the 13th century. In those times it was referred to as Savandi hills. Later during the reign of Hyder Ali, this hill served as a fort prison from where it was said there was no escape but via death. Since then the locals began referring to it as “Mrutyu Kupa” which vaguely translates to “the fort of death.”

The nearest town to Savandurga is Magadi, known for being the birthplace of Kempe Gowda who is kind of looked at as the founder of the city we now call Bangalore. More recently, the hills have been featured in the making of David Lean’s movie A Passage to India.

The Journey to Savandurga

I was going on this night trek to Savandurga along with a trekking group. My pick-up point was at Central Silk Board at 11 p.m. It was my first trek around Bangalore and I was duly very excited. The tempo bus was waiting, filling up as more and more trekkers trickled in. We hit the road by 11:30 p.m. I had been searching for good trekking groups for over a year and this is the first team that impressed me even before I started on the trek. The other trekkies joining us from various parts of bangalore got introduced to each other on the bus during the ride. Most trekkers came in groups – friends from office or were couples. I was the only loner, but I had my camera, that more than made up for it.

I am new to Bangalore but I could vaguely identify the route towards Savandurga, since it goes along the same route as I had taken when I had been to Manchanabele Dam just a few weeks before. Once we left the city behind, the stars were much brighter, a rare sight during monsoon around Bangalore.

Savandurga is surrounded by a thick forest of scrubs, said to harbor around 60 different tree and 119 shrub species. The hills are also home to the endangered Yellow-throated Bulbuls. The road became a bit bumpy as we entered the Savandurga Forest. On the way we passed the Manchanabele Dam. Created by the waters of the Akravathy River, Manchanabele Reservoir itself is a lovely place from where you can get an enticing view of the Savandurga Hill.

We reached the base of the hill near the Narasimhaswamy Temple at around 1 am. Were were going to conquer Biligudda tonight! It is a relatively easier climb compared to Karigudda, which requires permission to climb. We got an energy pack from the organizers comprising a juice tetra-pack, an energy-bar and a pack of biscuits.

Within a few minutes our local guide, Anna, came running with his huge torch. He is a local resident and knows his way around the hills. We started the climb at around 1:15 am.

Trekking in Savandurga can be thrilling as well as challenging as I discovered. It’s a smooth monolith and at certain points, very steep. Luckily we didn’t have rains and the trail was dry. I did though make a big mistake being in my Woodland’s. It’s a bad idea to trek in Woodland shoes. They are heavy and not good at getting a grip on the rocky surface. One should always get a rubber sole shoe and preferably one that is light.

We took a break midway through the climb. The clouds were flowing by us and it was time for some ghost stories. During story-telling, Ishan shared with us his experience of when he and his friend landed up in Bhangarh, a ghost village.

Sitting on the cold rock, I could see the lights from the nearest town of Magadi. Suddenly out of nowhere, a thick cloud enveloped us. In the haze, the light from our torches glowed like beams crisscrossing each other. It was an unforgettable experience. We spent a few minutes there and started again.

After some 45 minutes into the trek, we reached a makeshift shed.  There is a small natural pool beside the Mantapa. We took a break here and had a nice and warm bonfire going.

The bonfire gave us much need warmth from the freezing cold

Some of the guys took a quick nap. I was too excited to even think about sleep. I scouted around for places where I could get a good view of the sunrise.

By 5:30 a.m everyone was wide awake and ready to move on for the final climb. We hit dawn at around 6 a.m. The view was ethereal. It appeared we could just jump and snatch away a bit of the clouds.

The sun was hidden behind the heavy clouds so we weren’t able catch a glimpse but at some places the rays would somehow peek through. As light improved it also revealed a small pond near our shack.

There was a little drizzle and my shoes had become very slippery. The second part of the trek to the top of Biligudda was not very tough and we were there in around 30 mins.

We sat there basking in the conquest. At the top of Biligudda is a small shrine dedicated to Nandi, Lord Shiva’s sacred Bull. This shrine/tower was commissioned by  Kempegowda in the 17th Century.

Beside it there is a broken rock structure that is referred to as the Superman Rock. Why? well according to GBL anyone who stands on that rock looks like a superman 🙂

Viki on top of Savandurga

We stayed at the peak for an hour, immersed in the amazing beauty of mother nature. As the Sun started to become harsh and we started the descent at around 8 am. GBL has a “No Littering” policy, so no one is allowed to litter, beyond that they also gave us an option to carry back any plastic garbage left behind by irresponsible trekkers to Bangalore. We collected some 4 big bags of tetra-packs and soft drink bottles. While descending, we took a detour and some of the guys/gals did some rock climbing. I didn’t. Rock climbing is not my thing, so I try to skip as much as I can.

While climbing down we passed a fort wall, almost in ruins. It was only now that in the bright light, I was able to see properly the steepness of the hill. At night when we were climbing it didn’t feel so steep. We reached the base in an hour. I was exhausted. At the foothill there is a village by the same name.

From what I hear, Savandurga hills are frequently visited by pilgrims round the year, who come to visit the Narasimha Swamy and  Savandi Veerabhadreshwara Swamy temple situated at the foothills. The Narasimhaswamy Temple was abuzz with people paying respects and praying for happiness.

Just beside the temple, the guys from GBL had arranged for some delicious Tatthe Idli, a local delicacy for breakfast. I loved it and possibly ate a bit too much 🙂 . We had some coffee, took some rest and headed back to the bus. On the way back we stopped for a few minutes at the Big Banyan Tree which is near to 400 years old. Some monkeys came down to check my camera gear and went back annoyed when I didn’t comply 🙂

Thanks for reading! It was my first night trek and it was fabulous.  I do have a sense of achieving something beyond my limits on one of the jewels of the Deccan plateau. The trek is relatively easy and photographers looking for a easy outing amidst mother nature are going to love it. 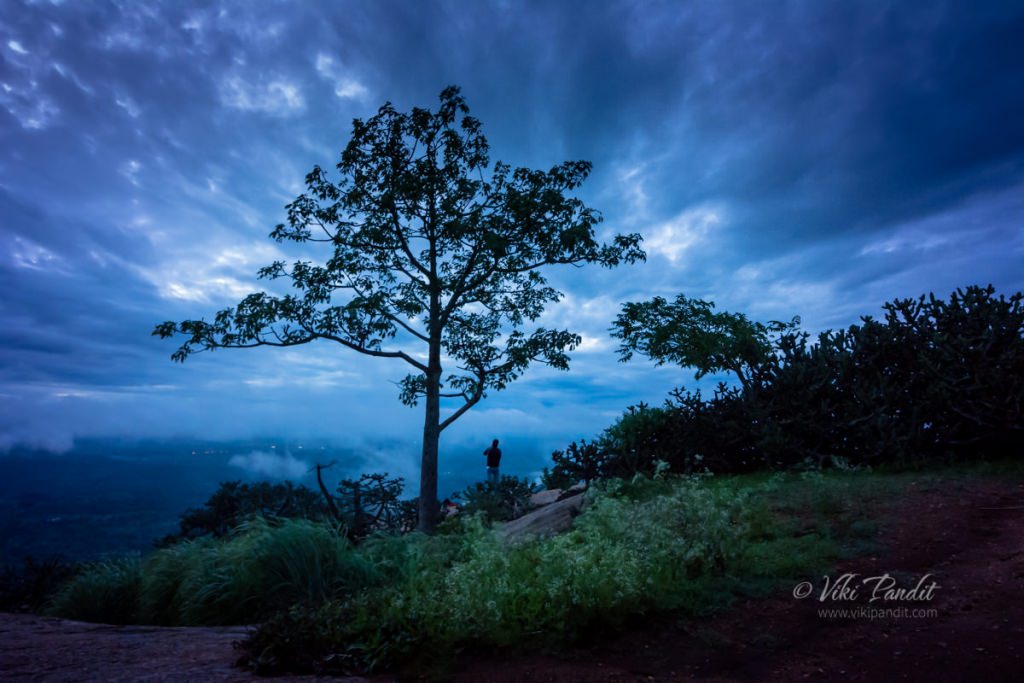