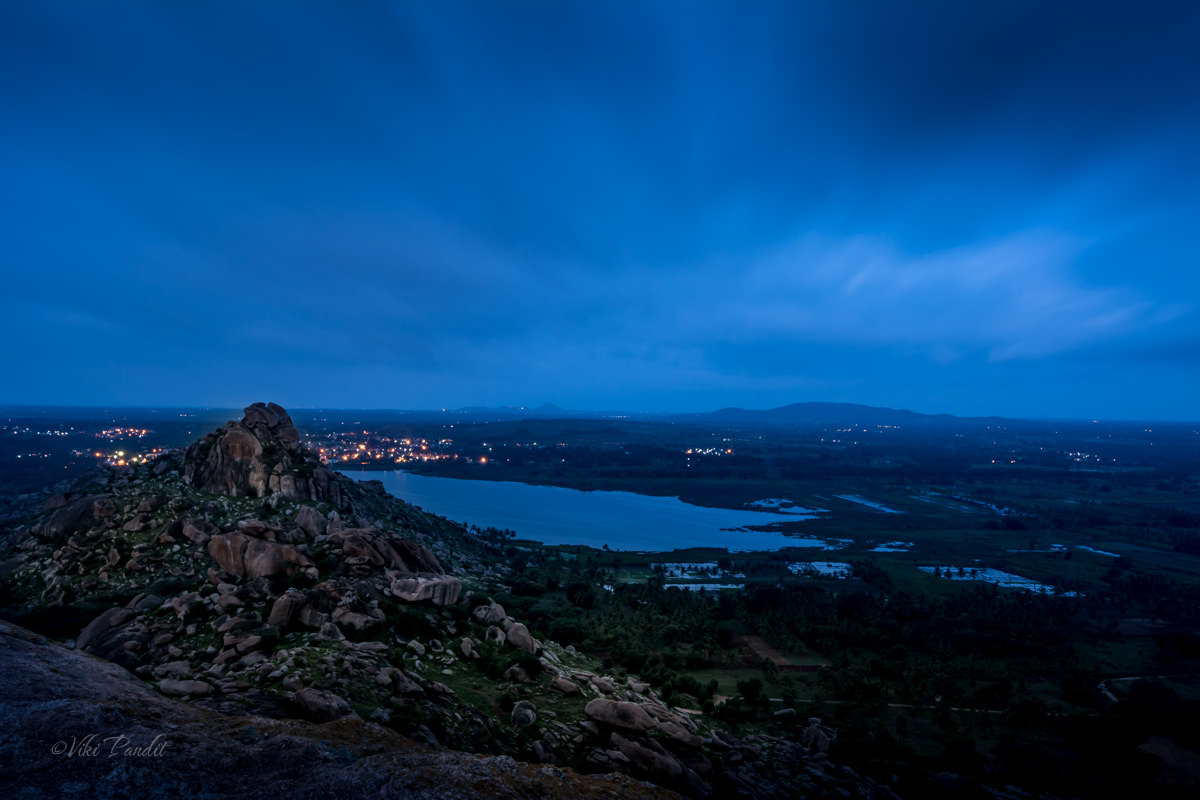 After the amazing experience of Savandurga Night Trek last weekend, I had to yield to this weekends Night Trek to Kunti Betta.

Legend has it that..

Kunti Betta consists of two rocky but easy to climb hills that towers over a picturesque lake. The nearest town is Pandavapura, a panchayat town in Mandya district, located approximately 130 km from Bangalore. It came into prominence during the Mahabharata period. It is said the Pandavas ended their exile of 14 years here in Pandavapura. It is also here that Bheema, one of the Pandava brothers slayed Bakasura, a demon who used to terrorize the local villagers. The Hills derive their name from Kunti, the mother of the Pandavas.

It takes around a couple of hours to reach Pandavpura so some of us took the opportunity to grab a nap. Midway we stopped at a highway tea stall. Along the way we also crossed the Pandavpura Railway Station. We finally stopped at the base near a boarding school. I have forgotten the name of the school. This time we didn’t have a guide, why I realized later. Kunti Betta is comparatively an easier trek from what I experienced at Savandurga Night Trek. No steep faces, boulders strewn across with easy trails all the way to the top. The only hindrance were some thorny bushes.

Situated at a height of around 2900 feet above sea level, Kunti Betta is one of the relatively easy treks.  We reached the base of Kunti Betta at around 2 am. This time around the Ishan & Salwat from Get Beyond Limits had an alternative route planned for us. There are certain things I love about Get Beyond Limits. They always do a good reckon of the place they are going to take trekkers and plan everything early on. Not many use this route, bit it was certainly more challenging. The first beautiful rock we reached was the Croc rock, with the rock face protruding out in the shape of a crocodile’s head. I had my new trekking shoes and I was amazed with the grip I was getting. Boo Woodlands! The night was pitch black. During the climb there were moments I would just sit back & stare at the beautiful starry skies. Luckily the clouds stayed away for  a few hours.

We reached the top of a small hill in an hours time. We took a breather there and were off again towards the peak. All around I could still see lights from the town and far off places. I wonder how it would feel if all lights went out for a few minutes. Along the way there were areas with open spaces, perfect for setting up a camp. We reached the peak in another hour. By this time the clouds had gathered again and the stars were gone. From the top of this hill at night, the Kunti Kund lake looked mesmerizing, slightly hidden from view by the other hill. I had my tripod and was able to get a long exposure shot of the amazing scene.

It was almost dawn, but we still decided to have a bonfire. Within a few minutes the Sun started to rise. It was hard to see with all the clouds, but the sky went into a fantastical gradient of orange and purple. Everyone was taking selfies 😉 Unfortunately selfies don’t do justice the the breathtaking scene they were in.

As the first lights of the Sun started to clear the darkness, we went towards the “Parikrama” rock. One has to jump over to reach this place. Even though I was in better shape on this trek, I was still far away from taking on this challenge.

By 8 a.m. we were ready to descend. Downhill was quick and easy. I find it fun to look for faces & shapes in clouds. As we descended, I went past a few boulders that I think were in the shape of an ape’s face. Ishan threw us a couple of challenges along the way. He is always looking around egging us on to take on new challenges. At the base we headed towards the Kunti Kund lake on the far side.

We passed some freshly planted sugarcane fields. I recalled having fresh sugarcane juice right from the fields when I used to visit my Grandpa in the village long time back when I was a kid. We reached the lake in about 30 mins. The breeze was almost blowing us away as we reached the banks of the lake. Some of the more enthusiastic trekkers went into the water. It wasn’t more than knee deep at the edges.

After spending some time at the bank of Kunti Kund, we trekked back to the town where we had a sumptuous breakfast lined up. I heard the town also has a few Jaggery factories. We had a scheduled visit to a sugarcane factory but everyone got tired and we skipped it.

The ride back to Bangalore was sleepy. I dropped off at Jayadeva at 2pm and took an auto ride home.

I would love to come back to this place again sometime when we have clear skies. I also wonder how beautiful it would look with the sun descending on that lake. But that’s for another day. Not too far in the future, I hope. 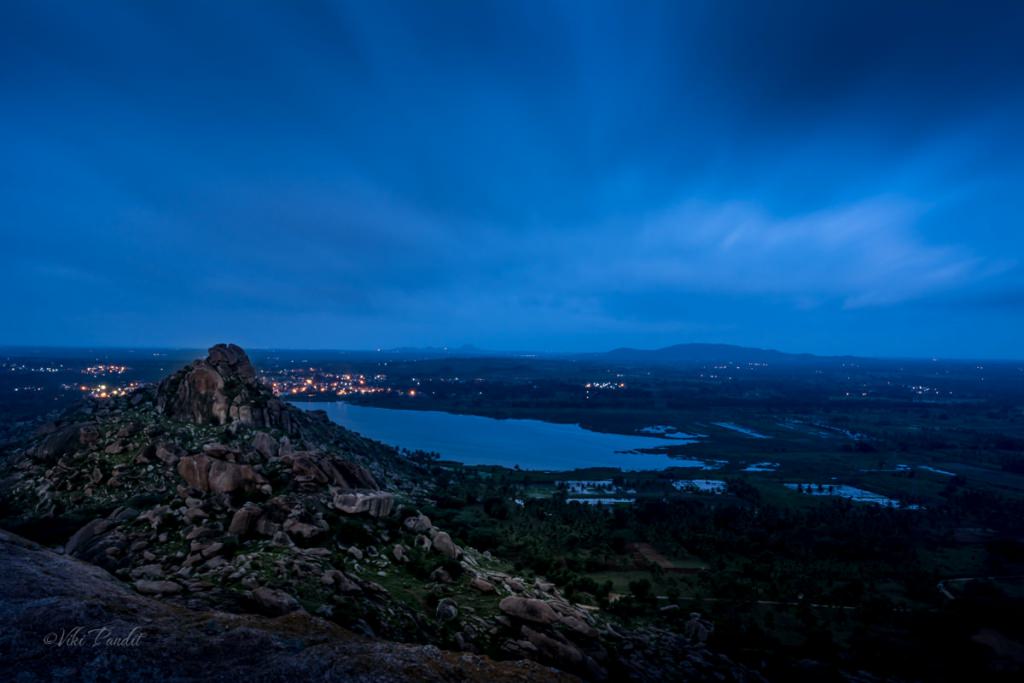 Places to see near Pandavapura