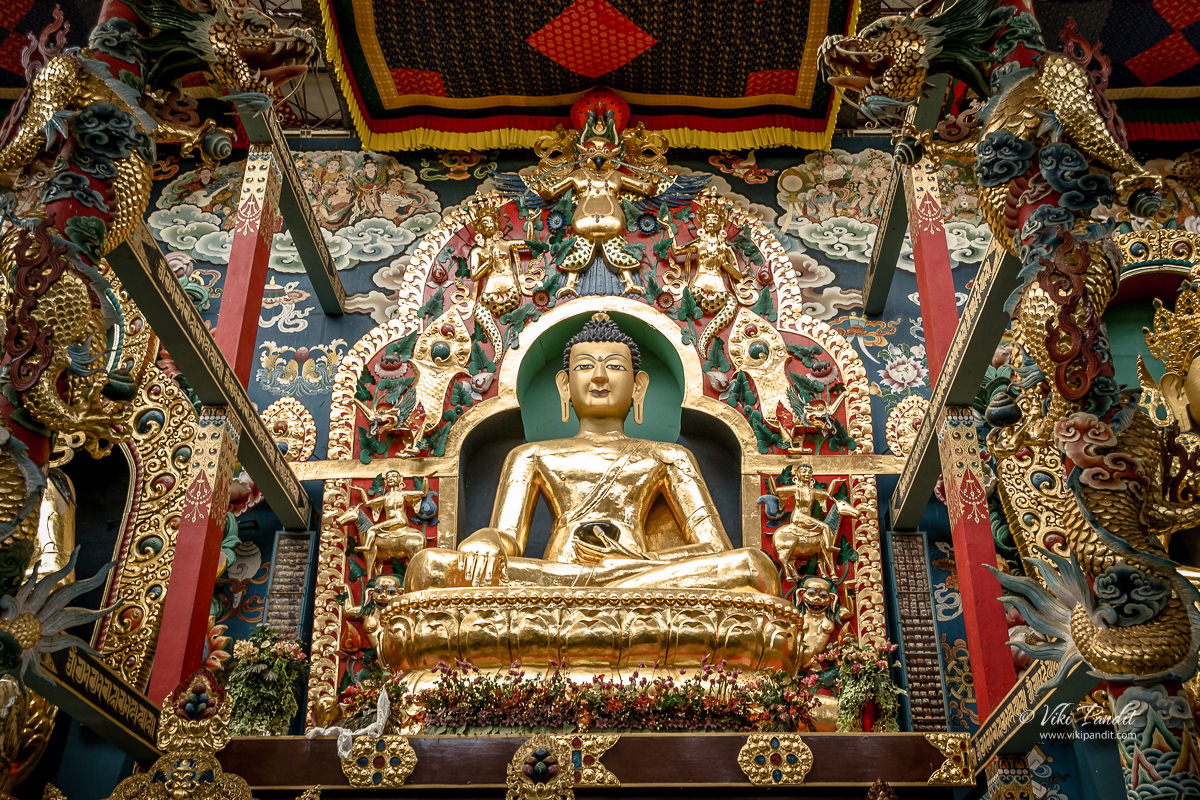 Bylakuppe is a peaceful Tibetan refugee settlement on the outskirts of Coorg, near the town of Kushalnagar.

Namdroling Monastery in Bylakuppe used to crop up regularly whenever I used to search for places to visit in Karnataka. Desperate to recover from the fatigue caused by urban living, I sought out this Buddhist monastery, to spend some time in peace away from the maddening noise. For this trip we reserved The Casiita, a cottage type resort in the quaint town of Kushalnagar. Heads up.. If you are used to clean bathrooms, trendy rooms and breakfast in bed, this hotel is NOT recommended. They do not even have a restaurant.

The ride from Bangalore to Kushalnagar is just around 5-6 hours and we booked a rental car with a chauffeur for the full trip. Having a car at our beck & call turned out to be very helpful, specially since we had to head into the town every night because our lodgings didn’t serve any food apart from tea and biscuits.

We started from our resort at around 9 a.m. The sun was bright and the skies were blue. The town center was some 10 mins drive away. It is the only place I got a good phone reception on the trip. Once you are in town, one can find quite a few restaurants. After a light breakfast of bread & eggs, we started for Bylakuppe.

It takes about 30 minutes from Kushalnagar to reach the Tibetan settlement off the Mysore-Madikeri Road. We passed quite a few large tracts of empty fields along the way. The roads were decorated on both sides with colorful paper hung on a string, dancing crazily in the wind.

As we approached the monastery, the surroundings began to change towards vast stretches of flat fields interspersed with tri-lingual banners honoring the Dalai Lama in English, Tibetan, and Kannada. A few minutes into the drive we passed through what appeared to be a marketplace with many Tibetan restaurants. The area was teeming with shaven monks in their flowing dark red robes. The only signs that we were not in Lhasa but in a village in south India were the Kannada-speaking street hawkers.

We reached the Namdroling Monastery in a few minutes and parked the car just opposite the main gate in a parking area for tourists.

Near the monastery is a small bazaar known as Camp 4 Shopping Center, selling Tibetan souvenirs. We decided to check it out later on our way back and headed towards the gate. Beyond the gate is a huge open space, the size of a football field. As we walked towards the main entrance of the monastery, a couple of shops inside the premises were selling souvenirs and snacks as well. During festivals, this main courtyard becomes an open stage where masked dancers twirl in colorful costumes to the sound of gongs and massive ceremonial trumpets. After crossing the courtyard, we went past a small corridor that led to the main temple. There was so much silence, I was feeling guilty to even speak.

To visit such an amazing place and not know the history makes me feel empty inside. So, before coming, I had breezed through some pages on the internet about this place. The followers of the Dalai Lama, facing Chinese autocracies, were fleeing Tibet in droves and found refuge in a number of settlements in India, like this one during the 1960’s. Though Bylakuppe is still referred to as a refugee settlement, it has grown into a full-fledged town. It is the second largest Tibetan settlement outside Tibet, first being Dharamsala in India. Bylakuppe consists of two Tibetan refugee settlements, namely Lugsum Samdupling which was established in 1961 and Dickyi Larsoe which was set up in 1969.

Unfortunately, even after six decades they have not been able to return back to their homeland. Now with a growing number of schools and monasteries, Bylakuppe appears more like a center for the Tibetan Buddhism rather than the refugee settlement it started out as.

Inside the compound we realized there were more than one monasteries. The first one, next to the entrance is Namdroling Monastery. Today the monastery is home to nearly 5000 monks and nuns, renowned as a center for the pure upholding of the teachings of the Buddha. The full name of the Namdroling Monastery is Thegchog Namdrol Shedrub Dargyeling. Initially spread over an area of 80 sq. feet, this temple was constructed of the bamboo from the forest which was donated by the Indian Government to the Tibetan exiles.

The first building hosts five golden statues of Buddha, Padmasambhave and Amitayu among others. Once you are inside the temple, try to keep silence as it is one of the requisites inside the holy complex. Usually devotees seek blessings by lighting the incense sticks after which they sit on carpet to imbibe the piousness and spirituality radiating at this place.

After spending some quite time in front of the Buddha, we moved on towards the Golden Temple past the calm landscaped gardens. Inside there are three enormous gold-plated statues of Buddha Shakyamuni (60 feet), Guru Padmasambhava (58 feet), and Buddha Amitayus (58 feet) set against intricate murals. The statues contain scriptures, relics of the masters, small statues, and clay stupas.

Buddha at Golden Temple in Bylakuppe

The walls are adorned with colorful paintings depicting gods and demons from Tibetan Buddhist mythology. These colorful paintings illustrate stories of God and demons from Tibetan Buddhist mythology. The altar is decorated with flowers, candles and incense. This is one of the rare monasteries where photography is allowed even inside the temple.

We sat there for a long time in the calming and blissful silence. This kind of place gives me sense of isolation from the noise of the outside world. I was raised as a humble human being and my parents never asserted any kind of religious beliefs on me. Still in my childhood I was very much an admirer of Buddhism and on certain days did go through an urge to indulge in its teachings. This is one of the few religions in the world that have never had to shed blood to create a place for itself.

Around it, you will find various stores selling traditional Tibetan jewelery and other artifacts.

The sun was beating down upon us in the middle of the afternoon but we decided to move on towards Sakya Monastery.

Sakya Monastery provides access to the Buddha’s teachings and guidance in a community of practitioners.

Inside Sakya Monastery, the flickering butter lamps create a beautiful ambient atmosphere. Tea bowls dot the low tables in the silent, incense-filled room. We sat still for a while. It wasn’t difficult anymore. Bylakuppe’s serenity had quietly slipped into my soul.

After 30 minutes of spirited silence we started on our journey back to the town. The landscape is lovely lined with Pine trees.

Row of Pine at Byllakuppe

While coming back, we decided to try one of the local Tibetan restaurants. There were a few, and all were very busy. We finally decided on the Potala Restaurant. Its a trendy restaurant on the first floor in the center of the marketplace. All individual tables were taken so we sat down on a large shared table with other guests. It took some time coming but soon we had our dumplings and some Tingmos (steamed bread Tibetan cuisine) delivered to us famished souls.

After the delicious lunch, we were finally headed back to the Hotel.

Along with Golden Temple/Monastery, there are many other sightseeing places near Madikeri, making it an ideal weekend getaway from Bangalore.

The best time to visit the temple is during the festive season. Various masked dances in their colorful attires can be seen performing their traditional dances at the main courtyard during festival. During this time, the main courtyard turns into an open stage for masked dancers and performers to present lively performances amid enthralling traditional music. The Tibetan New year (Losar) which usually occurs in the month of February or March is also great time to plan your visit.

Please leave a comment if you liked my story or follow our journey as we head out to see the birthplace of the mythical river Kaveri.

Places to see near Bylakuppe