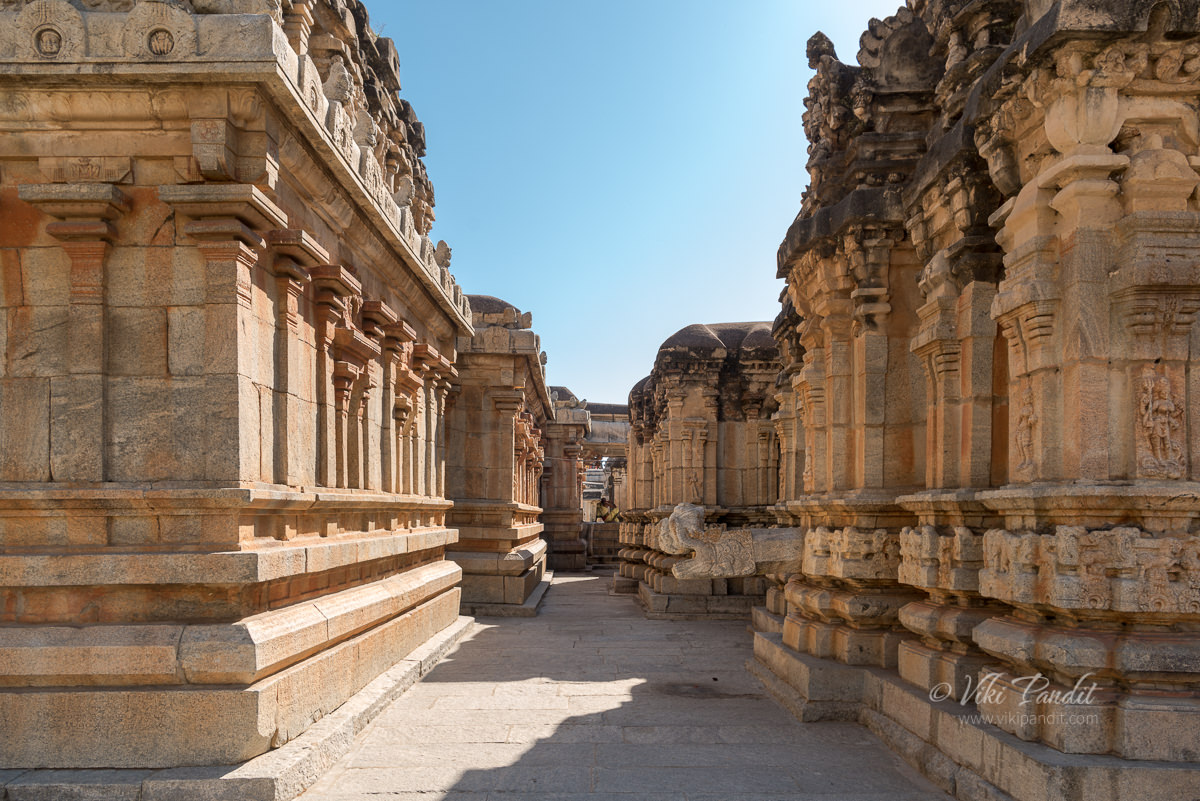 The amazing thing about living in Bangalore is that any direction I choose, each road going out of the city leads us to some special location, all within a radius of 100 kilometers.

Today we drive to a remote village called Avani to explore a 10th century temple. Avani is a small village in Karnataka in the Kolar district, situated at a distance of 80 km from Bangalore.

It was February and the skies appeared so blue and devoid of haze, it was just vanilla to the eyes. So on an early Saturday morning, we jumped into our SUV and left towards Kolar.

The NH75 leading towards Kolar is fascinating. It is a pleasure to drive on these well maintained roads, never mind the measly toll I had to pay twice.

The high-rise buildings along Whitefield were soon replaced by empty stretches of land with nothing but rocks and boulders. Along the way my wife spotted a lovely tree standing by itself in the endless barren land.

A lovely tree standing by itself along the NH75

After crossing Kolar, we left the highway and turned right at the RPG Service Station. We drove for another 6 km along a pebbled road before we reached a settlement. A local villager helped us on our way towards the Ramalingeswara temple, which lies at the base of Avani Betta (hill).

The temple is protected by the Archaeological Survey of India as a monument of national importance. Even though the temple structures were created sometime between the 9th-10th century, as per the ASI an inscription here dates way back to 399 CE.

The name Avani is of Dravidian origin. It means “Earth”. The village finds a mention in history dating back to the days of the epic tale of Ramayana. Though debatable, Ramayana was written some time around 500 BC. It is said that sage Valmiki’s ashram was located on a nearby hillock called Avani betta and it was here that the twin sons of Rama; Luv and Kush were given birth by Sita.

This part of the story carries on from the time when Rama ascended the throne of Ayodhya. A rumor began doing the rounds about Sita, his wife, questioning her chastity due to her being kidnapped and kept as a prisoner by the Asura king Ravana.

Although the Gods attested to the chastity of Sita during the agni-pariksha, where she walked through fire to prove her purity, king Rama, in order to set an example of an ideal king, banished, would be mother, Sita into exile. Banished and helpless, she was provided shelter by sage Valmiki in his ashram at Avani. I will not go into details how she reached Avani from Ayodhya, which are more than 2000 km apart, but lets just enjoy the story for what it is – a story.

Sita was very much distressed on being exiled, specially because she was already pregnant at that time. She started living in the ashram of sage Valmiki, heartbroken, always thinking about Rama. In due course she gave birth to twin boys, who were named Luv and Kush.

Valmiki raised them in his ashram, imparting them all his Vedic knowledge. Even though he didn’t inform them of their parentage, he raised them like Kshatriyas (warriors). Years passed and the boys grew into adolescents.

Back in the kingdom of Ayodhya, it was advised to Rama that he perform the Ashvamedha yagya. The Ashvamedha yagya was used by ancient Indian kings to prove their imperial sovereignty. As a part of this yagya, a ceremonial horse was left to wander at will for a period of one year. Wherever the horse traversed, any rival could dispute the king’s authority by challenging the warriors accompanying it. However everyone bowed to the majestic white horse from Ayodhya, accepting the greatness of Rama.

Wandering aimlessly, the horse reached the gates of Valmiki’s ashram. Luv and Kush who were still adolescents were charmed by the majestic white horse and they captured it. They had no idea about the purpose of the horse and brought it into their ashram. When asked to return the horse by the accompanying army, they boldly challenged the warriors to a fight.

As the news spread to Ayodhya, Rama sent Lakshman, his brother, to recover the horse. Against all odds Lakshman was defeated by the young brothers. He was followed by Bharat and Shatrughan who also tasted defeat at the hands of Luv and Kush.

Surprised and shocked, Rama himself had to come to fight Luv and Kush. A battle broke between Luv-Kush and Rama. But before anything unfortunate happened, rishi Valmiki approached the scene and stopped the battle. He divulged to the kids, their parentage and commanded them to ask for forgiveness from their father.

On knowing the reality of the twin princes, Rama and his brothers installed four shivalingas each in their respective names to absolve their sin, they committed by waging war against the two adolescents.

Parking our car in front, we entered 10th century temple through a huge gateway. The ancient temples known as the Ramalingeshwara group of temples, were constructed during period of the Nolamba reign. The Nolambas were a relatively minor South Indian dynasty compared to the Cholas, Chalukyas and the Vijaynagara empire. They were feudatories of the Rashtrakutas and ruled over the south-eastern region of Karnataka which covers present-day Kolar and Tumkur. They were Shaivites and the temples they built were dedicated to Shiva. They ruled from 735 to 1052 CE and are also credited with the creation of the Bhoganandishwara Temple in Nandi.

The temples in the complex are built with granite blocks in the Dravidian style and they were initially commissioned by the Nolamba dynasty. Once the Cholas overpowered the Nolamba, they added some renovations of their own.

As I mentioned earlier, the temple complex comprises of four main shrines dedicated to the four brothers – Rama, Lakshman, Bharat and Shatrughan. It is said these lingas were installed by Rama and his brothers themselves in order to seek forgiveness from Shiva for fighting with Sita’s children – Luv and Kush.

The temple consists of a sanctum (garbhagriha), a vestibule (antarala) and a hall (navaranga) with decorative pillars. The temple porch and pillars are decorated with various deities. This pillar, just before the entrance below has Ganesha carved into it.

The walls of the temple are also designed with various images of gods surrounded by floral motifs.

The inner sanctum of the temple was poorly lit but I was able to snap this shot of the main deity, goddess Parvati.

Deity inside Ramlingeshwara Shrine at Avani

To the left of the Ramalingeshwara temple lies the shrine dedicated to his younger brother Lakshman. The outer walls have pilasters surmounted by towers (shikhara). This temple also has a garbhagriha, an antarala and a navaranga. It is the most ornate of the four and houses the largest shivalinga. A Nandi statue sits near the doorway facing the shivalinga.

The big hall called navaranga is supported by four beautifully carved pillars with a rounded shivalinga at the far end. The pillars in the centre depict dancers and musicians. Shielded from the wind and Sun by the surrounding walls, they still have the carvings in a very healthy state.

Another interesting aspect of this temple is the carvings on the ceiling which displays a sculpture of Uma-Mahesvara (Shiva with his consort Parvati) surrounded by an ensemble of ashtadikpalas (guardians in eight directions).

The back wall of the Lakshmaneshwara temple features a carving of the Kali goddess.

This temple too has various deities carved into the ceiling with Uma-Mahesvara in the center.

After paying our respects, we went around the back of the temple complex. On the side of the temple there is a carving of a deity in a miniature shrine.

There are other shivalingas scattered across the complex. On the far left of the back of the temple premise lies the Vighneshwara temple with a small and beautiful idol of Ganesha.

From the back of the temple complex, one can see Avani hill in the background which we will be hiking later.

Back of the Ramalingeshwara Temple complex

Coming around a full circle, we found ourselves in front of a big Nandi sculpture near the Bharatalingesheshwara Temple.

Right after, there is a mini temple dedicated to Vali and Sugreeva, the kings of Kishkindha.

Just behind the Vali Temple is a mandap housing the Navagraha (the nine planets). What is Navagraha? It is the 9 other planets in the Solar System. While the world was still debating whether the Earth was flat or not, Indian sages already knew about the existence of the 9 planets that made up our Solar system.

The external decorative elements of the temples for all shrines include friezes of elephants and lions. The design pattern is consistent with the temples in Hampi that were created during the heights of the Vijayanagar empire.

After a through exploration of the temples, we moved on towards the Avani hill, where at the summit, another piece of the puzzle of Ramayana waits for us.

Hidden away in obscurity, Ramalingeshwara Temple is another gem in the heritage of Karnataka. It is interesting that these places with connections to Ramayana keep popping over all over the places. Structurally maybe these might not be as amazing as the monolithic temples of Mahabalipuram or the enchanting monuments in Hampi, but these stories keep my interest going. Thanks for reading. Please leave me a comment if you liked the post. After exploring the temple complex, we set off for the hike to Sita Parvati temple at the top of Avani betta.

Places to see near Avani