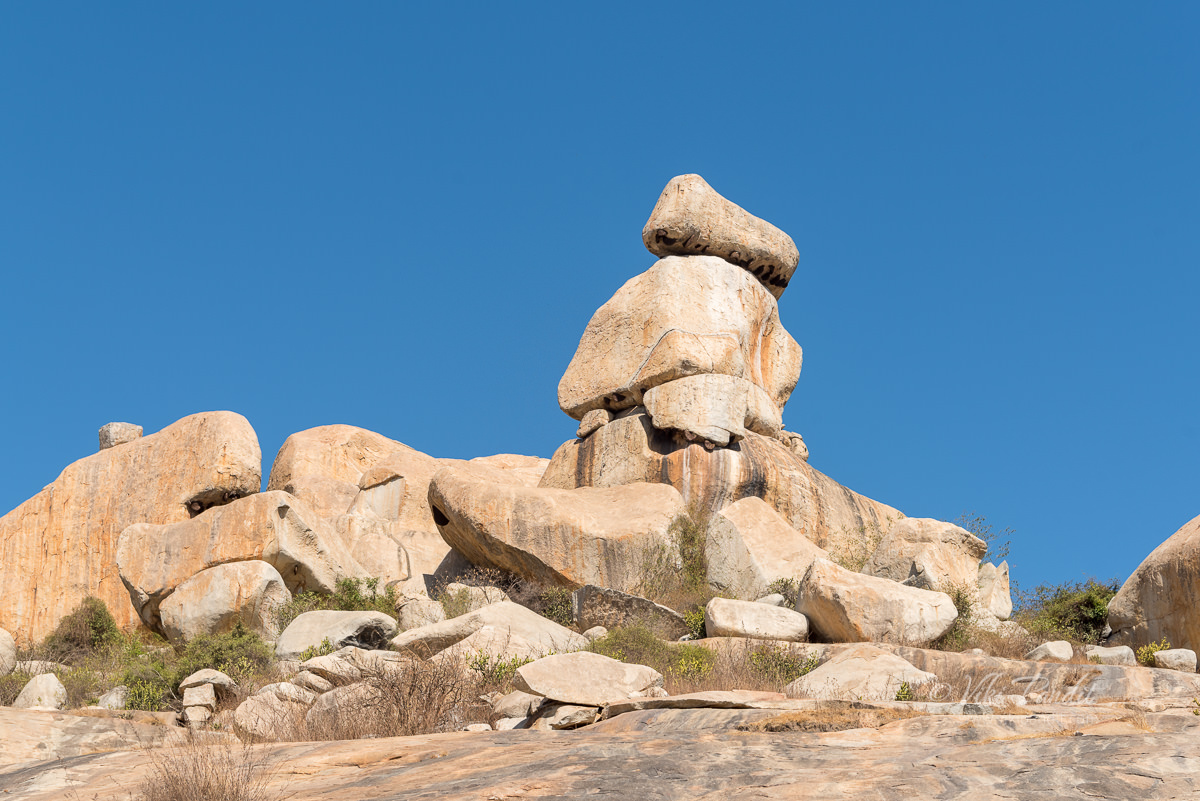 This is a two-part series. I started writing it as a single story because they are so intimately intertwined, but the article got so big that it made more sense to break it up into two parts for ease of reading.

Avani is a tiny hamlet in the Mulbagal Taluk (group of villages) of Kolar district, just 80 km away from Bangalore. The first part of my journal describes the history of Avani and the story behind the creation of the Ramalingeswara group of temples that lie at the base of Avani hill or Avani Betta as it is locally called.

Apart from activities for young millennials like hiking or photography, Avani is also a place of considerable antiquity. During ancient times it used to be called Avantika Kshetra and was of great sanctity in this part of Bharatvarsha (India). According to legend, the hill was residence of sage and poet, Valmiki, the author of Ramayana.

After a thorough exploration of the 10th century Ramalingeswara temple, I and my wife, Ranita, started on the hike towards the hillock – made popular by the epic tale of Ramayana. Every boulder on this hillock has deep mythological connections. The hill finds mention in a Bana inscription from 339 CE. In another, it is referenced as “Gaya of the South.”

The hill finds mention in a Bana inscription from 339 CE.

For those who are not so familiar with this part of the story of Ramayana – when lady Sita was banished by Rama, her husband, and the king of Ayodha, it is said that sage Valmiki sheltered her here at his ashram (hermitage). The local folklore goes further to establish that Sita, after being sent to exile, gave birth to her twins Luv and Kush right here at Avani.

The Avani Betta Trek is relatively an easy one. The hillock has steps carved in to make the climb easier. Still, it is advised to begin the trek before the blazing afternoon sun comes up. It was only early March and yet it was extraordinarily hot.

Midway through the climb, there is a cozy resting place surrounded by huge boulders. Created about 3-4 billion years back, these boulders are witness to everything humanity has ever achieved. The strong breeze was comforting and we sat down for a breather among some of the oldest granite rocks in the world.

The trail gradually opens out into a wide space filled with interestingly shaped boulders, some precariously placed. One of the common sights at this place is small stacks of stones put together all over the hill. These are prayer stones, created mostly by childless couples who frequent the Sita Parvati temple at the summit, wishing for a child of their own.

We found ourselves surrounded by multiple boulders in different shapes and sizes on this wide area of the hill. These boulders are a part of what is known as the Eastern Dharwar Craton. A craton is a piece of the Earth’s crust that has existed as a solid since they were first formed on this planet. Since then, they have been pressured and eroded by weathering agents forming somewhat recognizable shapes from our current lives. In my opinion, this one looks like a part of a burger bread.

Beside the “burger bread” rock, this boulder on the edge looks like a flying saucer caused by the natural forces over millions of years of erosion. Don’t you think these strangely shaped boulders have been strategically placed as opposed to hurled as in the case of volcanic eruptions?

Next to these boulders, you can find a small pond, said to be created by Lakshman, brother-in-law of Sita, to help her obtain water on the hill. Logically it doesn’t fit into the timeline of the historical tale as the brothers Rama and Lakshman never knew about the whereabouts of Sita during the time of her exile. Honestly many folklores should be taken with a pinch of salt. They don’t have any hard evidence as to anything mentioned in the article, but the belief certainly was strong enough to last centuries.

Lakshmana Tirtha: created by Lakshmana in order to quench the thirst of Sita

I loitered around a bit trying to find better angles to capture the boulders. Doesn’t this one look like a carrot?

Lakshmana Tirtha: created by Lakshmana in order to quench the thirst of Sita

En route to the summit, we came across various caves, which once belonged to sage Valmiki and Sita respectively along with other residents of the hermitage. The descriptions though are in Kannada, so if you don’t understand the language, it’s better to hire a guide who can explain in yours.

This is the most beautiful section of the hill. Open spaces, lovely breeze, trees to provide shade, sigh… it would make a wonderful place to set up a night camp.

Below is a cave where sage Valmiki is said to have lived. He performed penances in this cave. The mud here is considered sacred and is believed to have medicinal properties. I have heard, local villagers collect this mud, soak it in water and then drink that water in the belief that it will cure their illness. It is said Luv and Kush took birth in this very cave.

A shack midway up the hill on Avani Betta

By this time I was a bit dehydrated and on top of that, I realized I had left my water bottle in the car. We stood in the shade for a while before moving on. Although the sun was beating down upon us, the massive boulders kept us in the shade. The strong breeze helped.

Further up the trail, we found a natural pond, which is believed to be the place where the ashram residents used to wash their clothes. Today, lovely lotus flowers adorn the pond.

Below is a close-up of the same boulder we have been seeing from the base of the hill. It is kind of a trademark boulder that identifies the hill from the others surrounding the region. It is said Sita witnessed the battle between Luv-Kush and Rama from the top of this boulder.

Sita Parvati temple atop the hill

There is a last bit stretch of stairs right after the pond that took us straight to the temple.

It took us about an hour to reach the summit. Of course, it can be done faster with younger feet. The hill to the west of Kolar called the Shatasringa Parvata or ‘Hundred-Peaked Mountain’ is ‘Antharagange’, associated with the story of Parasurama and his fight with King Kartaviryarjuna over Surabhi, the divine cow.

As the story goes, King Kartavirya Arjuna (Sahasrarjuna) and his army visited Jamadagni, Parasurama’s father, when the king demanded the magical cow from Jamadagni. When Jamadagni refused, the King sent his soldiers to take the cow, but Parashurama killed the entire army and the king with his axe. In return, the princes beheaded Jamadagni. Thus, Parasurama took an oath to behead the entire Kshatriya race, which is said to have taken place on the hills. It is said that the ‘kolahala‘ on the death of Kartaviryarjuna gave its name to the town, which later became Kolar.

Viki at summit of Avani Betta

This is the main temple in Avani and is one of the few temples which has the deity of Sita worshiped here. This ashram is also the place where according to legend, Sita eventually becomes one with the Earth. We were early. The inner sanctum was closed, unfortunately, the priest hadn’t arrived yet.

According to ancient scripts, it was initially a Parvati temple. Locals say that goddess Parvati appeared to Adi Shankaracharya in his dream and expressed her desire to establish a Sita statue next to hers. A deeply devoted Adi Shankaracharya executed her wish and since this temple came to be known as Sita Parvati Temple.

We took some rest after reaching the summit. The landscape surrounding the Avani hill is full of small lakes and scattered boulders.

The plateau is interrupted by hills and mountains of varying heights, particularly in the north. After a refreshing rest, we started our descent. On the way back we saw some people making their way up the hill – to the temple.

A yearly fair (Jatra) is held in Avani during the Maha-Shivaratri festival. A Ratha Yatra is also held in July at the Ramalingeshwara Temple. Many devotees visit the temple during this time but they also leave behind a mess.

Ride back to Bangalore

The hike had left us sapped of energy. The descent was a lot quicker and after grabbing a couple of soft drinks from a village store, we began our ride back to Bangalore taking back with us, a slice of history.

On the way, we stopped at a marigold farm to take some pictures.

The drive back to Bangalore was more or less uneventful and we were home by 2 pm.

Taking a break on the NH75

If you are a person who loves history or someone who just wants to get away from the city’s buzz – this place is an easy getaway. The hike, though easy is still fulfilling. The heritage attached to the place is interesting and keeps it from becoming just another boring hike.

For non-Kannada visitors language will be a bit of a problem. Kannada is the main language spoken in the district of Kolar. You can also find some Telugu speakers.

What is the difficulty level of the Avani betta trek?

It is a relatively easy trek

Is parking available near Avani betta?

There is no parking lot near Avani betta

Do we need to obtain permission to hike Avani betta?

No prior permission is required to hike to Avani betta, however, please be considerate of local customs and beliefs

Places to see near Avani Betta