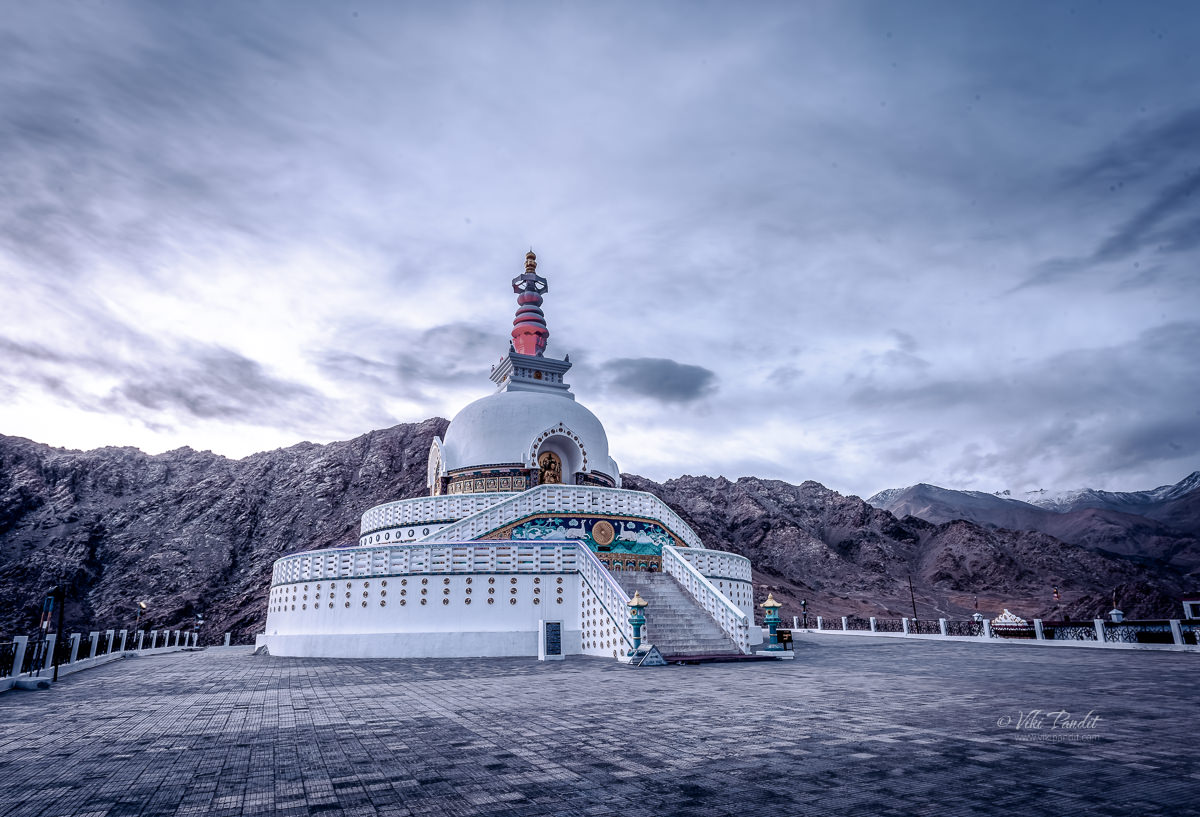 The unique beauty of Ladakh lures visitors from all across the globe. The union territory is geographically located in the western most extension of the Tibet plateau. It’s name ‘Ladakh’ literally means “the land of passes.” The capital city, Leh, hosts the only airport. During the winter months Ladakh is completely cut off from the rest of the country. As summer approaches, tourists queue up in hoards to lose themselves in the serenity, tranquility and spirituality of this desolate world. Also known as “Little Tibet” the city is known for its colorful culture and rich traditions of Mahayana Buddhism that still flourishes in the purest form in this region.

Shanti Stupa is one of several must-visit destinations in Leh. Surrounded by lofty mountains it has a special place in the cultural history of Ladakh. This white-domed Stupa on a hilltop in Leh was conceived by Japanese Buddhist Bhikshu, Gyomyo Nakamura as part of the Peace Pagoda mission.

We had spent earlier part of the day exploring Namgyal Tsemo Gompa and Leh Palace. All the walking had left us tired. We took a brief rest at the Shaolin Guest House, and then towards early evening, left for the peace pagoda.

Shaolin Guest House lies a couple of kilometers east of the Shanti Stupa. We walked down Sankar road and then onto the Shanti Stupa Road. The walk is not difficult but it is not recommended for tourists coming from the plains as they might experience breathlessness because of the high altitude.

It is advisable that you take the first day off and just relax. It will help your body to acclimatise to the thin air of Leh.

Midway through the walk we were greeted by the picturesque Poplar trees. With its towering height, the Poplars stand distinctly in the landscape of Leh. These Poplar trees are said to mature very quickly growing up to 8 feet in the very first year. In the barren desert with almost no vegetation, the brilliant green trees are a sight for sore eyes. On the way, we passed by many small single floor houses, some made of bricks and some of mud. These boundary of these dwellings are marked with medium height ash colored brick walls.

Walking to the Shanti Stupa

As we reach the outskirts of the city, the roads starts to go uphill and the houses gradually disappear. The evening was breezy and we didn’t feel any discomfort hiking up the hill.

The Shanti Stupa road would be the easiest way for reaching the Stupa. The motorable road leads right up to the gates of the Stupa. One can also reach here by climbing near-500 steps from the opposite side of the hill but in my opinion it is not a recommended route for the unfit.

It was 7pm by the time we reached the entrance of the Stupa. The Sun had hid behind the mountains but the light was still great. Situated on the hilltop at Changspa at a height of 4267 meters, the Stupa provides wonderful panoramic views of surrounding mountains.

It is said Buddhism penetrated Ladakh during the time of Emperor Ashoka in around 204 BC. But even before the reign of Ashoka, the Arhat Majhantika blessed these lands by his visit and prophesied this region becoming a stronghold for Buddhist religion in the Himalayas. Ladakh was in those times known as Mar-yul (Red Land).

It cannot be denied however that it was during Ashoka’s reign that Buddhism spread rapidly and took a stronghold in this part of the world. The indigenous community which were mostly nomadic and lived off meat at that time, gradually absorbed the concept of vegetarianism that is still followed today.

The reign of Ashoka also introduced the religion in Japan. The teachings of Buddha aroused new consciousness in the people of Japan and thus rose Todaiji, the greatest of the Buddhist temples in the world. And this brings us to the Shanti Stupa which stands Leh as a mark of the friendship between two countries connected by a religion of peace.

The idea of Shanti Stupa has its roots in a vision conceived many years before by Nichidatsu Fujii. Nichidatsu Fujii [1885-1985] more commonly known as Guruji, was founder of the Buddhist religious order, Nipponzan Myohoji, which is dedicated to working for world peace through Peace Walks and the construction of Peace Pagodas across the world.

Around 1842, repeated invasions of Ladakh by the Kashmiri rulers shook Buddhism at its roots. Led by Maharaj Gulab Singh, the Dogra rulers undermined the aristocracy of Ladakh and brought about what is regarded as the darkest hour in the history of Buddhism in Ladakh. Alien to the local culture, they did considerable damage to the gompas and the stupas in the region. As a part of his mission to resurrect Buddhism back in Ladakh Bhikshu Gyomyo Nakamura concieved the idea of building the Shanti Stupa in Leh.

Construction of the Shanti Stupa began in April 1983 under the supervision of Bhikshu Gyomyo Nakamura and Kushok Bakula, a lama from Ladakh. The project was built with the help of Ladakhi Buddhists, who offered voluntary labor, and Japanese Buddhists, who consider India as the “sacred” birthplace of the Buddha.

The Shanti Stupa holds the relics of the Buddha at its base, enshrined by the 14th Dalai Lama. The 14th and current Dalai Lama, Tenzin Gyatso inaugurated the Shanti Stupa in August 1991 celebrating 2500 years of Buddhism.

The beautiful Stupa today stands as a symbol of the friendly ties between the people of Japan and India. Since its inauguration, Shanti Stupa has become a popular tourist attraction. The Stupa overlooks the city of Leh, providing panoramic views of the city, the village of Changspa, Namgyal Tsemo in the distance and the surrounding mountains.

Depictions of Buddha at Shanti Stupa

We waited for the dusk to arrive hoping the tourists would clear by then. Far away we could see the sun set over the lovely city of Leh. Mountains are the crowning glory of the region, as they stand tall, overpowering and majestic in myriad colors.

Sun about to hide behind the mountains

The Shanti Stupa features the photograph of the current Dalai Lama with the relics of the Buddha at its base. The Stupa is built as a two-level structure. The first level features the central relief of Dharmachakra with deer on each side.

As we move up the stairs we face the central structure that features an image of Lord Buddha in golden color sitting on a platform turning the Dharmchakra wheel.

On the same level, as you walk around the circular path, we can find three other images depicting the birth of Buddha, defeating of devils in meditation and death of Buddha along with many small images of meditating Buddha, embossed in vibrant colors.

Defeating the devils depicted on the Shanti Stupa

Both levels feature a series of smaller meditating Buddha reliefs along the walls of the central structure.

Birth depicted on the Shanti Stupa

Parinirvana is a Mahayana Buddhist festival that marks the death of the Buddha.

Called maha parinirvana, this transitional state occurs only to those who have reached enlightenment, or nirvana, during their lifetime. Those who achieve nirvana are released from samsara, the cycle of rebirth, and karma. Instead, when they die, they reach nirvana-after-death or the eternal Self. It is also known as Nirvana Day and is celebrated on February 15th. Buddhists celebrate the death of the Buddha, because they believe that having attained Enlightenment, he achieved freedom from physical existence and its sufferings.

Dusk was upon us and the lights along the Stupa were gradually lighting up one by one.

The white-colored domed-shaped structure, looks extremely beautiful during night when it is illuminated.

It was dark and the sky was lit with a billion stars. The moon was nowhere to be seen even though the Amavasya (New Moon) had passed a couple of days back. On the way downhill a cafe was still open where we gathered some warmth with a hot tea and a bag of chips. It was late and we were the only guests at the dimly lit cafe.

The lights come on in the beautiful city of Leh

The walk downhill was relatively easy. Although by that time it was pitch dark. The area is also devoid of any street lights. Holding hands and armed with a torch we slowly made our way back to the Hotel. It was a walk that I will always remember.

Thanks for reading. Our upcoming schedule takes us to Nubra valley where if I am fortunate, I can capture some nice sand dunes.

How to reach Shanti Stupa?

The Stupa can be reached by a drivable road or on foot using a series of 500 steep steps to the hilltop.

What is the most delicious food in Leh?

The most popular ladakhi foods are Thukpa (noodle soup) and Tsingmo (steamed buns).
When in Ladakh also enjoy the buckthorn juice which is indigenous to the union territory

What are the best restaurants in Leh?

Tibetan Kitchen and Gesmo are two or my most favorite restaurants in Leh. If you are up for a coffee, you must try Lehvenda in the main market area. It is amazing. 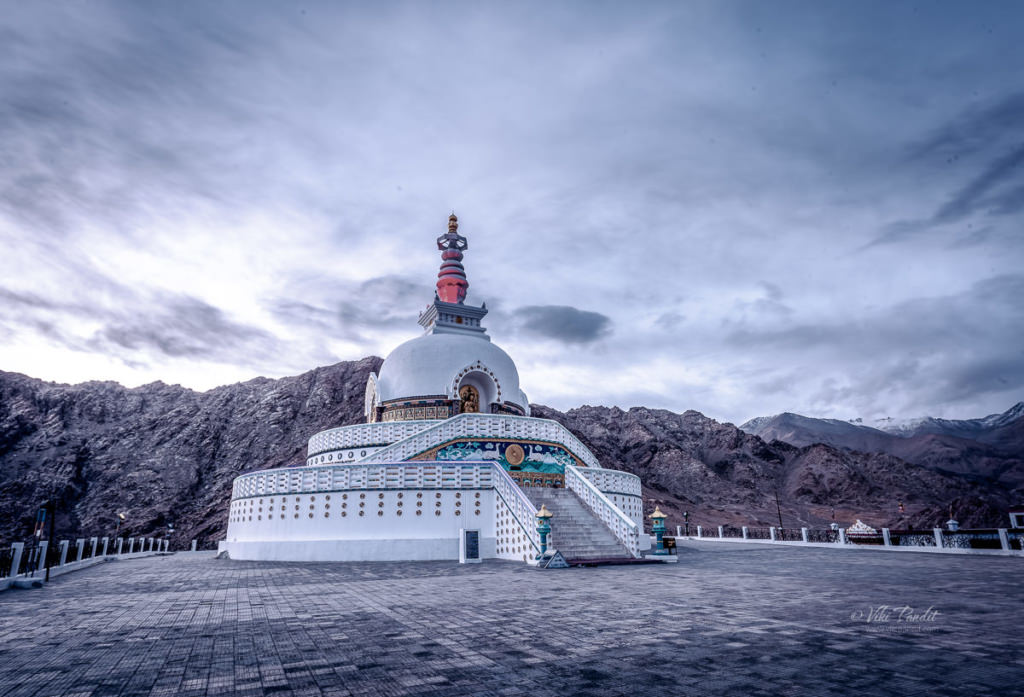 Places to see near Leh