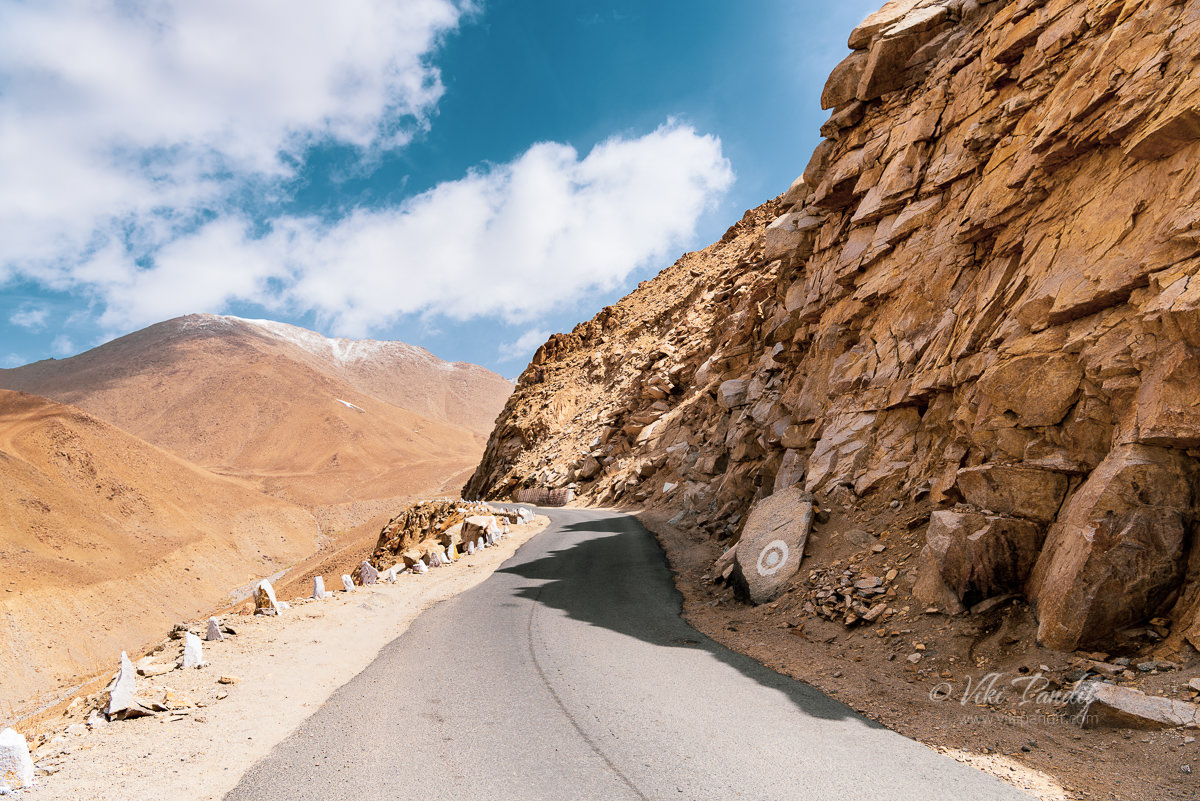 Ladakh is the highest altitude plateau in India. It is situated in the state of Jammu and Kashmir, bound by two of the world’s highest mountain ranges, the Karakoram in the north and the Himalayas in the south.

Khardung La is a mountain pass in the Ladakh that serves as the gateway to the Shyok and Nubra valleys from the city of Leh. Though we write it as Khardung La, the local pronunciation is more like “Khardong La” or “Khardzong La.” The word La means pass while Kharzong means castle. I am not really sure how the combination of these words were used to name this mountain pass.

We were staying at the Shaolin Guest House in Leh. Leh is the largest settlement in Ladakh. It is a town of modest bazaars and winding streets, hemmed by rugged hills. A few of the main attractions are the Shanti Stupa, Namgyal Tsemo Gompa and Leh palace. These places lie quite close to each other and can be visited in a single day.

We were leaving for Nubra Valley. Tsering, who was our designated chauffeur for the trip was at the gate exactly on time to pick us up for the long ride to Nubra Valley via Khardung La. The 150-km journey from Leh to the Nubra valley includes some of the most diverse and exhilarating topography in the world, and its high point (both literally and metaphorically) is the Khardung La.

As we drove into the mountains, the air began to feel chilly. Due to high altitude of Ladakh, the climate is very cold and the air is very thin, which in turn makes the heat of the sun extremely harsh. I don’t think I ever saw Tsering without a thick layer of sunscreen on his cheeks.

The geographical location of Ladakh ranges from 2,750 m high at Kargil to 7,672 m high at Saser Kangri in the Karakoram Range. The average height of the plateau is around 3,000m, and the numerous motor-able high altitude passes, such as Khardung La, Changa La and Thaglang La allow for the region to be connected albeit during the summer months.

The motorway was built in 1976. It was opened to public vehicles much later in 1988. But the history of this road is much more ancient. Traders of the Silk Route, which developed in the pre-Christian era used the pass to travel between Leh and Kashgar in Xinjiang province of China. The 2000 meter climb to the pass provides thrilling panoramic views of the Zanskar Range beyond the Indus Valley and towards the Karakoram.

Clouds casting shadows over the mountains along Khardungla Pass

Snow covered peaks near the top of Khardungla Pass

The elevation of Khardung La is claimed to be 5,359 m (17,582 ft). Earlier it was miscalculated to be around 18380 ft, which has now been corrected using measures from various other GPS surveys including SRTM data and ASTER GDEM data.

The signboard at Khardungla Pass viewpoint. This is the correct height of the viewpoint

Maintained by the Border Roads Organization (BRO), the road is open to tourists all year round, but even now in the summer months, we could see icicles hanging along the sides from the rock faces. We stayed at the viewpoint for about 20 minutes and towards the end of the stay I could feel the dizzyness coming over me. We left soon afterwards. In fact a signboard nearby discourages tourists from staying beyond half an hour at this place.

The view at the topmost viewpoit along Khardungla Pass

A few minutes after the viewpoint, the roadsides were completely covered in snow. It was biting cold outside. In olden times the Ladhakis used to refer to India as Gyagar (gar or kar: white, ‘where people wear white clothes’). Here ‘white’ signifies the difficulties of living. For them life appeared more grim on the Tibetan plateau while they had always heard of warm and pleasant life in the Indian plains. Experiencing this level of snow in summer I can totally understand their hardship living in these cold mountains.

From North Pullu into the Nubra Valley, the road was very well maintained.

As we descended we witnessed the first views of the Shyok river emerging from the eastern side of the Karakoram and flowing north– south before it takes a westerly course to join the Nubra river. In contrasting terms Nubra Valley means a valley of flowers while the Shyok river that flows into it means the ‘River of death’

An hour’s drive downhill from Khardung La leads to the first stop in Nubra called Khardung, a small village in a sandy flatland. We took our lunch at the village. Nearby some wild asses were busy munching on the rare green grass. This was our first view of any greens since leaving Leh.

Soon after, at Tirit, the road bifurcates: one takes you to the valley of the Shyok river which has the towns of Diskit and Hunder, with a magnificent high-altitude desert between them; and the other to the green valley of the Nubra river, towards Sumur and Panamik.

As we got closer to Hunder, the weather changed drastically and we were surrounded by sand from the cold desert. The skies had turned ominously gray, but we moved on excited and looking forward to our next stop: Diskit Monastery.

An Inner Line Permit (ILP), which can be acquired at the Distict Commissioner’s office in Leh, is required for tourists, Indians and foreigners alike. People are required to check in en route and must provide photocopies of the permits to be deposited at each checkpoint.

Altitude sickness is a serious health concern for people not previously used to high altitudes. Prophylactic altitude-sickness medication such as diamox may be necessary for some as there are no emergency medical facilities to treat altitude sickness along the route.

The road is closed from approximately October to May due to snow and is often subject to long delays due to traffic congestion on narrow one-lane sections, washouts, landslides and road accidents.

One thought on “Road to Khardungla Pass”

Places to see near Leh