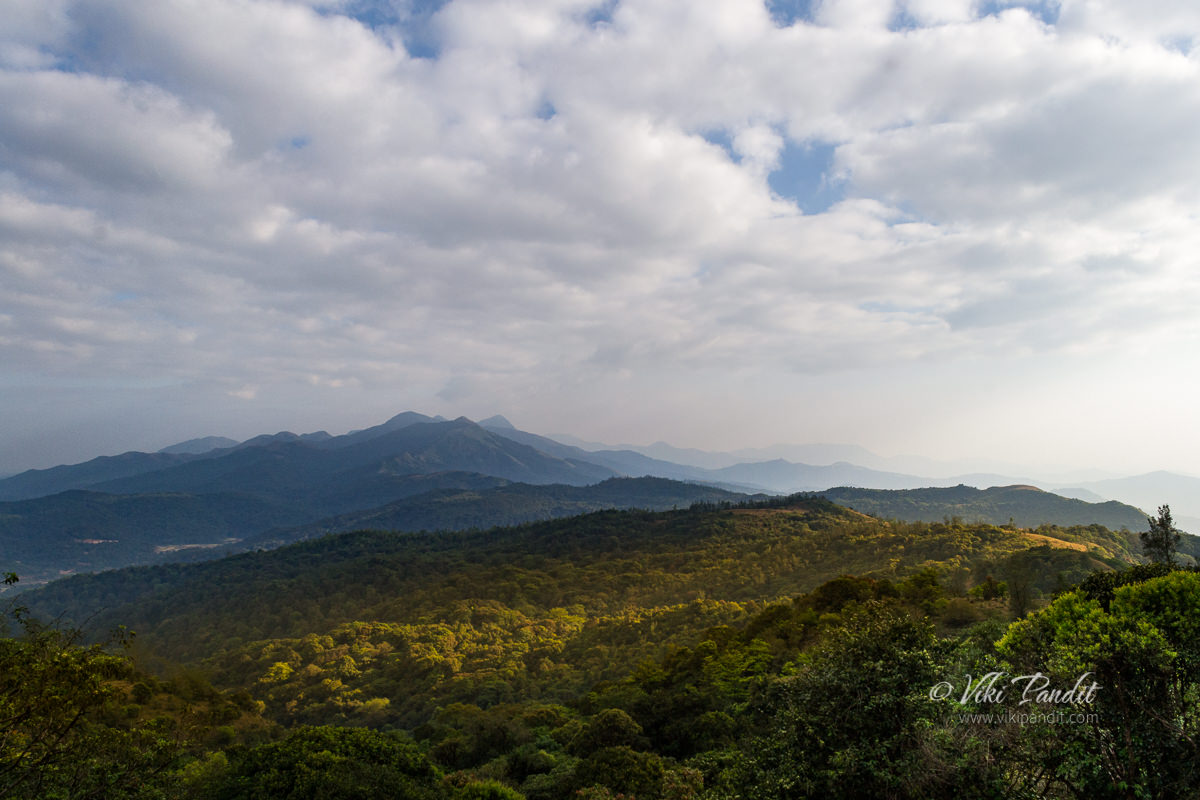 Talacauvery is the birthplace of the sacred river Cauvery. It is located around 44 km from the nearest town of Madikeri. Located at an altitude of over 1200 meters, the beautiful site is surrounded by misty ranges of the Brahmagiri hill.

Talacauvery or Talakaveri is considered a holy place for many Hindus. For me, the lush meadows layering the beautiful hills were enough to draw me towards one of the most mesmerizing places in Coorg.

The ride to Talakaveri is a bumpy one and I would recommend hiring a local driver as the curves might be a tad difficult to maneuver. We started around 1 pm after lunch from Kushalnagar and reached the entrance at Talakaveri at around 4 pm. It takes a little more than two hours for the drive.

On the way we stopped at Bhagamandala, which is the confluence or Kudla or Sangama of the three rivers, Tala Kaveri and its tributaries Kanika and Sujyoti Interestingly Sujyoti is largely mythical Bhagamandala comes from the name Sri Bhagandeshwara temple, which houses the deities Bhagandeshwara (Lord Shiva), Subramanya, Vishnu and Ganapathi Known as Bhagundeshwara Kshetra.

An inscription here talks about how Bhagamandala was captured by the tyrant king Tipu Sultan who tried to rename it as Faisalabad. It was later recaptured by Doddaveeraja after a fierce battle which lasted for about a week.

A massive gate welcomes you inside the man made premises. Inside you will find yourself in front of a squarish tank with steps leading into a water body. Kaveri River originates as a spring feeding the tank. This tank is called the holy Kundike of Talakaveri, which is considered to be a holy place to bathe on special days. The water is then said to flow underground to emerge as the river some distance away.

Near the water tank in a sheltered area, you can find a beautifully carved Nandi Bull statue in black stone. Many people perform pooja at the river origin point. I also saw some carrying away the sacred water in pitchers. Tala Kaveri temple consists of shrines dedicated to Goddess Kaveriamma, Lord Agastheeshwara and Lord Vinayaka. The linga is supposed to have been installed by Sage Agastya.

Myths about the birth of Talakaveri

There are multiple stories surrounding the birth of the river. The one that caught my interest is a story that begins with sage Agastya from Kashi. Agastya muni is considered the father of traditional Indian medicine. In his book of medicine, ‘Agastya Samhita‘ he is believed to have given the description of and instructions for, the creation of medicines for many types of health problems thousands of years ago! He has also authored the ‘Naadi Shastra‘, which records his findings and extrapolations on astronomy.

So according to the story, once upon a time in southern India there was a long period with no rains. The lands became parched and cracks appeared in the agricultural fields. Animals and birds could not get food or water, their suffering was beyond words. It is said that a demon named Surapaduman wanted to destroy all life. Sage Agastya felt sad and approached the Hindu god Shiva for help. Shiva gave him a small amount of Ganga river in his kamandala (small pot which he was carrying) and said wherever you spill this water the river will flow from there.

The sage set out to find a place where it could benefit humans and animals alike. On the hill of Brahmagiri, the demon Surapaduman tried to snatch the kamandala from the sage. At that moment, it is said that Ganesha appeared in the form of a crow and threw the kamandala down to earth. After touching the earth, water drifted out of kamandala and took the form of river Kaveri. For this reason Kaveri is respected as one of the 7 sacred rivers of Sapta Sindhus in Hindu scriptures.

Pilgrims flock to Talacauvery in mid-October where the river gives darshan to her devotees. The water from the spring overflows and it is called Tula Sankramana.

On the northern side of the water tank, you will find a fleet of steps going up to the top of the Brahmagiri hill. Its about 400 steps. The climb was a bit difficult for me as I was carrying a tripod and some heavy camera lenses.

The Brahmagiri Peak stands at a height of 1,276 meters above sea level. You might be searching for the stream that flows from here to form the river. Sorry to disappoint you, it is not permanently visible from this place except during the monsoon.

This place no doubt has a breathtaking view of the mountains. I captured some shots of the surrounding area. This is the Nishani Motte Peak. It is quite a favourite among hikers from Bangalore.

Towards the north you can find the Talakaveri Wildlife Sanctuary. This whole area spread over spread about 105 sq. km was declared as Wildlife Sanctuary in 1987. The hills are covered with tropical evergreen forests. A few coffee and cardamom plantations can also be found within the sanctuary.

We enjoyed the beautiful wind and the pleasant surrounding till the sun started to set.

This place no doubt has a breathtaking view of the mountains and a very well maintained temple. The river Kaveri flows through three states of the south, Karnataka, Tamilnadu, and some parts of Kerala. The river is considered a part of Ganga, thus, also called Dakshina Ganga (Southern Ganga).

India is a country of myths and miracles. It is unfortunate that one of the oldest civilizations – the Greeks have lost most of their heritage. Many foreign groups are relentlessly trying to laugh off at our ancient knowledge so that they can patent them and then sell it back to us in modern packaging. I implore my fellow Bharatvashis to understand the immense knowledge that our ancestors have left behind and not left the western cultures hijack it.

Thanks for reading! Please leave me your comments or reviews. If you liked my story please consider following me on Instagram or join me on my next hike to a lesser known Bannergatta Hill.

When is the best time to visit Talakaveri?

On Cauvery Sankramana day (the first day of Tula Masa month, according to the Hindu calendar, which normally falls in mid-October) thousands of pilgrims from neighboring flock to the river’s birthplace to witness the rise of the fountainhead when water gushes up from the spring at a predetermined moment. 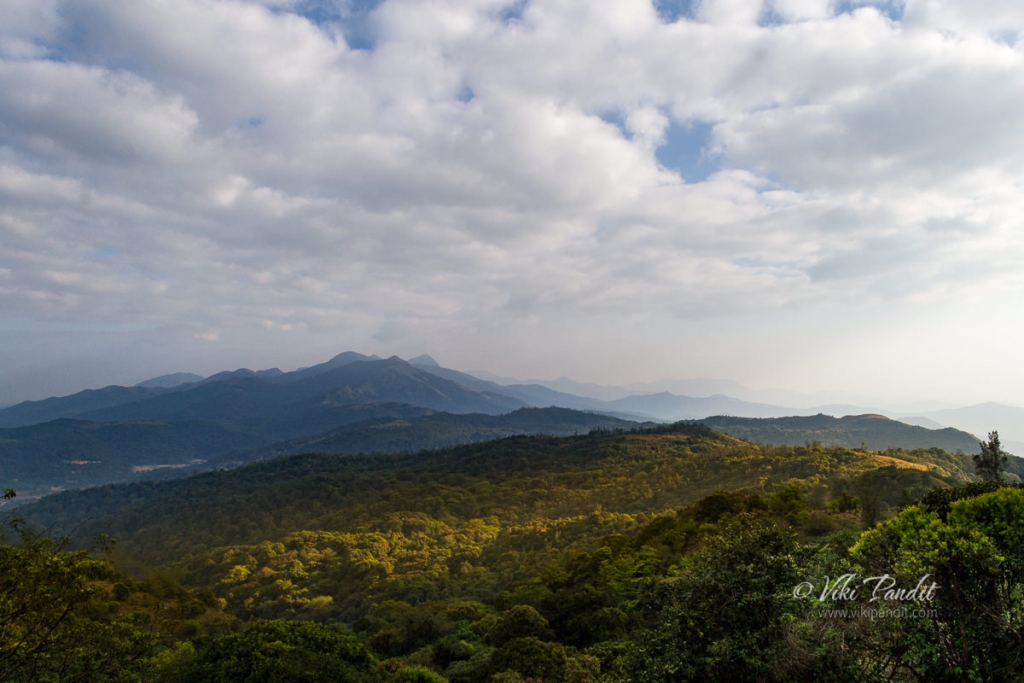