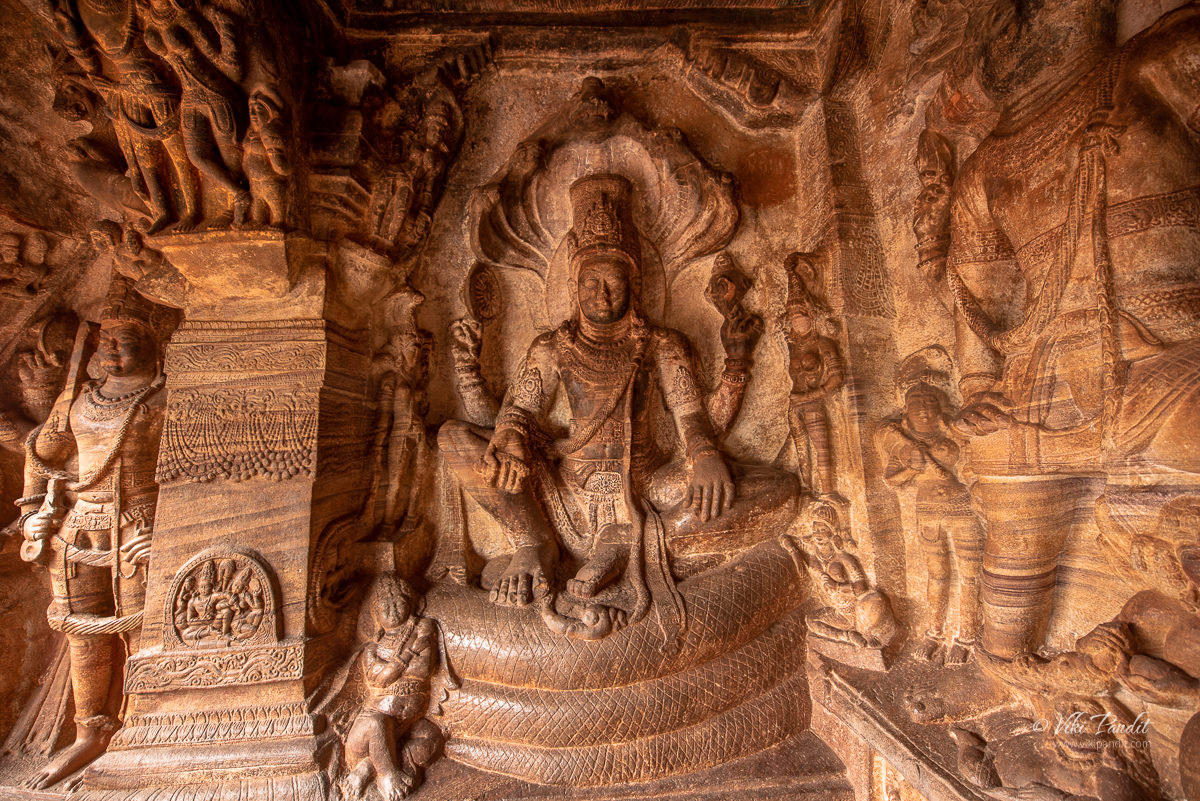 Today we hike up a small hill in the quaint town of Badami, in northern Karnataka, to explore the rock-cut cave temples dating back to the 6th century. Primarily commissioned during the times of Chalukya reign, the temples provide an insight into the Indian architecture that influenced the next generation of sculpturing style surrounding regions of south India.

We were staying at Clark’s Inn, which in my opinion is the best hotel in this area. It is also a good base, if you have Aihole and Pattadakal planned in your itinerary. Both heritage sites are located within an hours drive from Badami.

Badami has been known by many names. During the reign of Early Chalukyas it was known as Vatapi. With passing of time, it also came to be referred to as Vatapipura, Vatapinagari and Agastya Tirtha. The city lies at the exit point of a ravine between two steep mountain cliffs. The cave temples that we explore today, lie on the southern cliff.

You can find a parking lot at the base of the hill that hosts all of the 4 Cave temples, each at a different height. The Badami cave temples represent some of the earliest known examples of Hindu temples in the Deccan region.

The cave temples are numbered 1 to 4 in the order of their creation. They along with the temples in Aihole transformed the Malaprabha River valley into a cradle of temple architecture that influenced the components of later Hindu temples elsewhere in India. The Badami Caves complex is part of a UNESCO-designated World Heritage Site candidate. I believe the only thing keeping it waiting to get the official nod is the encroaching settlement that surrounds the heritage site.

As usual, I would advise to tourists, not pick a weekend to visit this place as it is overcrowded. Guides are available near the ticket counter on all days. Tickets costs ₹25 per head for adults. There is an additional camera charge of ₹25 for cameras. Even though it is a nominal charge, I find it atrocious that ASI is charging for cameras separately but not charging people using phones to take the same pictures.

The adventure begins from Cave Temple 1 which lies just a few steps up from the parking lot, on an elevated platform. The Badami cave temples are carved out of soft Badami sandstone. If you have been to Hampi nearby, you can clearly tell that the color of these temples are much reddish.

The exteriors of Cave Temple 1 in Badami

A series of steps take you up to the cave platform. the wall beside the stairs depict carvings of dwarfish ganas in different postures as if they hold the cave floor.

Cave Temple 1 is dedicated to Hindu God Shiva. This is immediately apparent from the 18-armed carving of the Tandava-dancing Shiva as Nataraja on the right wall of the cave. Elaborately portrayed with the arms in various poses, the image expresses the dynamic posture of Shiva in his cosmic dance.

On the opposite side, standing just outside the entrance of the cave is a two-handed Shaiva dvarapala(guard) who holds a trident, and below it carved into the wall is a bull-elephant fused image where they share the head.

The exteriors of Cave Temple 1 in Badami

As you enter the cave temple beside the dvarpala you can find an image of Harihara, along-with goddess Parvati and Lakshmi.

Harihara with Parvati and Lakshmi in Badami Cave Temple

The chamber has five columns sculpted with reliefs of flower garlands, foliage and jewelry. The first line of pillars in the front of the cave are richly decorated.

Pillar carvings inside Cave 1 in Badami

The roof features two most interesting sculptures. One of them is a beautifully carved image of Nagaraja, with a coiled serpent body around a human torso.

Roof carving of Sheshnag inside Cave 1 in Badami

Roof carvings inside Cave 1 in Badami

The inner sanctum contains a Shivaling with a headless statue of Nandi that sits facing the garbha ghriya (sacrum sanctum). Light inside the cave is not very good, so I suggest you come during the afternoons, when the light is properly able to reach the interiors. Lack of sunlight means the caves are smelly from centuries of dampness.

A headless Nandi sits inside Cave 1 in Badami

From the first cave temple a fleet of stone stairs lead up to the 2nd Cave Temple. I was pointed out that there are about 64 steps to the second cave. Its like baby steps compared to Kuon-ji Temple in Yamanashi, where I did 287 steps.

The 2nd Cave Temple is consecrated to Lord Vishnu. It is smaller compared to the first and might I say, less refined. It has been sculpted into a boulder that almost double in height of Cave 1. The cave entrance is divided by four square pillars, all carved out of the monolithic stone face. The temple sits on an elevated plinth, decorated with a frieze of ganas.

Exteriors of Cave Temple 2 in Badami

On the extremes of either sides of the entrance are standing dvarapalas (guards) holding flowers, not weapons. The pillars here are rather simple in design with reliefs of flowers and jewelry. The pillars also feature amorous couples towards the top.

The roof contains a complex combination of four Vishnu images surrounded by a maze of Swastikas, somewhat similar to what I noticed in the Ramalingeshwara Temple in Avani.

Though the pillars fail to generate any enthusiasm, the two sides have a wonderfully sculpted images of incarnations of Vishnu. On the left you will find a beautiful relief depicting the legend of Vishnu in his Varaha (boar) avatar rescuing goddess earth (Bhudevi) from the depths of cosmic ocean, with a penitent multi-headed snake (Nāga) below.

An image of Varaha inside Cave Temple 2 in Badami

After exploring the 2nd Cave Temple, we began to move towards the next Cave. You may find a number of monkeys leisurely sitting here. Do not engage with them or they might attack you or snatch your bags away.

But before we move further ahead, just beside the 2nd Cave Temple, molded by the force of winds, lies a natural cave. I small stairs hidden from view takes you up to the cave.

From the cave one can get a good view of the wide Agastya Lake at the base of the mountain.

A view of Agastya Lake from the natural cave in Badami

The cave does not feature any prominent sculptures. You can barely make out some figures on the side walls as if something was planned and started but was abandoned midway. A mutilated figure of Padmapani can be found deep inside in this natural cavern.

Steep steps from here ascend to the to the ramparts that constitute the citadel at the summit of the North Fort. Yes, this hill was upgraded into a fort because of regular raids from the Mughal Sultanate. A small doorway that fits not more that two people at a time leads to a broad paved terrace.

Doorway to Cave Temple 3 in Badami

Beside the doorway to the right, lies a tiny building, sandwiched inside the crevasse of what looks like a split in the boulder.

A small structure sandwiched between the boulders

Facing north, Cave Temple 3 is about 60 steps from Cave 2 and at a higher level. It seems to the most decorated among the three we had already explored. It features Vishnu-related mythology, and is also in my opinion the most intricately carved cave on the entire hill.

The cave stands raised on a plinth divided by seven columns. Cave 3’s primary theme is Vaishnavite, though it also shows Harihara on its southern wall – half Vishnu and half Shiva shown fused as one. Each of the pillars contain magnificent pieces of art. These columns randomly feature ganas and amorous couples.

Cave 3 also shows fresco paintings on the ceiling, some of which are faded and broken. You can still see the color green used in these paintings.

The columns on the inside of the cave temple are much simpler.

The sculptures in Cave 3 are well preserved. On the left of the entrance, we have a lovely image of Vishnu sitting as Vaikuntha over the coils of Sesha. The multi-hoods of the Sesha shelter the crowned head of Vishnu. To its left is another image of Varaha (man-boar avatar) rescuing earth , just like we saw at the previous cave.

A sculpture of Vishnu sitting at Cave Temple 3 in Badami

On the right side of the entrance lies an image of the Trivikrama-Vamana.

Vishnu in the Vamana Avatar at Cave Temple 3 in Badami

It is accompanied with another two carvings of incarnations of Vishnu – The Narasimha and the Harihara. Might I say, in all my travels to Indian temples, I have never seen Narashimha smiling so cutely.

From here, separated by a series of small steps, but on a similar height lies the last of the Cave temples. Located immediately next to and east of Cave 3, Cave 4 floor is situated about 10 feet lower and is the smallest of the four. It is the only one dedicated to Tirthankaras, the revered figures of Jainism. It is believed to be constructed after the first three, sponsored by Hindu kings in later part of the 7th-century.

Like the other caves, Cave 4 features detailed carvings and a diverse range of motifs. The cave has a five-bayed entrance with four square columns.

Exteriors of Cave Temple 4 in Badami

Inside the temple, behind a narrow door sits a carving of the Buddha. At each corner you will find carvings of Bahubali, Parshvanatha and Mahavira with symbolic display of other Tirthankaras.

The main deity of Buddha inside Cave Temple 4 in Badami

Buddha is enshrined as the main deity. Because of the narrow door and no other light source, it was tough to capture it in the darkness.

Buddha inside Cave Temple 4 in Badami

To the left, right at the entrance, you can find Bahubali, with vines wrapped around its legs.

On the right, just opposite to the Bahubali image, you will find a detailed image of Parshavanata, with a multi-hooded cobra rising over its head.

Pillars inside Cave Temple 4 in Badami

The second row of pillars features detailed carvings of Mahavira embedded into a surrounding carving depicting a gate of sorts. This divergence of design leads to much speculation about the time of creation of this temple.

After exploring the cave, we took a small breather at the top. From the podium in front of the 4th Cave temple, you can get some lovely shots of the expanse that surrounds Badami. Here is a shot of the lovely Agastya Lake with the northern cliff looming over it.

A monkey near Cave Temple 4 in Badami

Please note, you will find many monkeys along the hike. Do not carry food and make sure your bags are tightly wrapped as they will try to snatch it and run away.

A view of Agastya Lake from Cave Temple 4 in Badami

Thanks for reading. I look forward to your comments and questions. If you are looking to explore more of the Badami region, follow my story as I hike to the ruins of the Shivalayas of Badami. If you are in Karnataka do not miss these interesting heritage sites around Bangalore.

Places to see near Badami