Today we visit the Kuon-ji (久遠寺), which is a major Buddhist temple in Yamanashi Prefecture. Hidden away far into the mountains of Yamanashi, it is locally referred to as the Minobu-san Temple, after the mountain upon which it is built. Reaching it itself is a challenge as we traveled almost two hours from Lake Tanuki, on the local train and then had to take a bus to the base of the mountain, but as if that was not enough, to reach the temple there is the ultimate challenge of climbing 287 Bodaitei steps.

Minobusan Kuon-ji (久遠寺) is the head temple of the Nichiren shu (Nichiren sect). It is based on the teachings of the 13th century Japanese monk Nichiren and is one of four popular schools of Buddhism in Japan. The temple was founded in around 1281 by Nichiren and his disciples. Nichiren Shu was an offshoot of Mahayana Buddhism which had been practiced in Japan since the 5th century CE.

Born as an outcast, Nichiren entered priesthood at the young age of 12. He had an eventful life during which he was exiled twice mainly for writing inflammatory articles. He was a charismatic leader who attracted many followers during both his missionary trips and his exiles.

During his self-imposed exile at Mount Minobu as well, he led a widespread movement of followers in Kanto and Sado regions through his prolific writings. After his death in 1282, his ashes were laid to rest in a tomb at Kuon-ji on the same mountain where he had spent nine years reciting the Lotus Sutra.

During the Sengoku(1467-1600) and Edo(1603-1868) periods, the popularity of the temple as a place of pilgrimage grew even more. By 1712 with the help of his committed followers, the temple complex boasted of 133 structures within its extensive grounds. Tragedy struck multiple times between 1744 to 1875 reducing many of the temple’s buildings to ashes. Over time with the donations from the local residents, most of these structures were re-built and the present-day temple remains a very large establishment.

We spent the early part of the day wandering around Lake Tanuki. After lunch we reached Fujinomiya. From Fujinomiya Station we took the local train to JR Minobu Station. From the station, a public bus brought us directly to the base of the Minobu mountain. The bus ride takes about 12 minutes and it operates from 8:40 am until 16:40 pm all round the year. It was already 4 pm by the time we reached the Sanmon Gate.

Generally most temples in Japan close their gates by 5 pm. So you should keep some time on hand when you visit. The area was already desolate and all the nearby shops had closed by then. A lady, who happened to be passing by, helped us out with the directions.

The first Sanmon Gate was built in 1642. Unfortunately it was burned in 1865. The gate was later rebuilt in 1907. It is one of the three famous gates in Kanto Province.

A stone path from the Sanmon Gate leads up to the base of the Bodaitei steps.

A couple of minutes later, we found ourselves at the base of the Bodaitei steps. These stairs have been constructed in 1632, from the donations of the residents of Sado Island, where Nichiren stayed during his second exile. The height of the stairs is about 104 m from the ground and are popularly known as the “steps of enlightenment”. The 287 stairs lead directly to the Main Hall of Kuon-ji.

The 287-step stone path provides access from the Temple Gate to the Main Hall, where the top, represents Nirvana. The stairs are divided into seven sections, evoking the seven letters “Na-Mu-Myo-Ho-Ren-Ge-Kyo” comprising Odaimoku.

On a lighter note, after completing the 287 steps, I did experience a blinding light for a few seconds, but the enlightenment didn’t last for too long 😉

Alternatively, there are two hiking trails: a west course (3 hours) and an east course (2.5 hours) which climb up their respective flanks of the mountain.

Kuonji at Minobusan was merely a local temple until Nitcho (1422-1500) became the chief priest of the temple in 1462. Through his untiring efforts, Minobusan Kuonji rapidly grew up to become a large temple. Seeing this, the Five Fuji Temples became nervous.

Hondo of Kuon-ji Temple in Yamanashi

The Main Hall referred to as Hon-do, was lost in big fire in 1875. The current building was rebuilt and its opening ceremony with new Buddha statue was held in May 1985. The hall contains a black-and-white painting of “BOKURYU” (Black Dragon) on the ceiling by Matazo Kayama, which is considered a masterpiece.

Interior of the Hondo of Kuon-ji Temple in Yamanashi

The Main Hall is full of wooden decorations. This hall is the biggest in Nichiren shu. Inside the peaceful hall, surrounded by the the sweet scent of incense, I quickly forgot my cramps from the long climb up the stairs.

Interior of the Hondo of Kuon-ji Temple in Yamanashi

Just opposite to the Main hall lies the five story pagoda. Originally the Pagoda was built at Minobusan in 1619 from donations of Lady Jufuku-In, Lord Toshitune Maeda’s mother in Kaga Prefecture. Unfortunately the first Pagoda was burnt in 1829, and it was lost again by a massive fire in 1875.

This Five-Storied Pagoda at Minobusan has been rebuilt under the pious patronage of supporters from all over Japan. The current Pagoda indicates completion of recovering all Buddhist buildings at Monobusan after Meiji period. This Pagoda has been reconstructed as recovering the original Pagoda by combination of traditional and modern techniques. The opening ceremony of the Pagoda was held from May 13th to 17th for 5 days in a row in 2009.

Near its base you can also find the belfry.

Right next to the main hall, lies the Seishinkaku Soshido or the Founders’ Hall. The Hall originally belonged to Nezumi- yama Kannoji Temple, which was established by 11th Shogun Tokugawa Ienari in 1836. The Hall was demolished in 1841. It was rebuilt in 1881 and converted into the founders’ hall.

In addition to temples in the area, there are many temple inns where you can stay the night. These temple inns are attached to many of the temples on Mt. Minobu.

Shukubo Kakurinbo Temple Inn, which is attached to Gyogakuin Kakurinbo Temple, is also accommodating to non-Japanese guests. If you do decide to spend a night at one the many temple inns at Mt. Minobu , don’t forget to attend the early morning prayers held at Minobusan Kuon-ji Temple.

It’s also possible to take a 7-minute cable car ride (1,400 yen return) up the Minobusan Ropeway to the summit with mesmerizing views of Mt. Fuji, but it was already closed for the day.

Although there are many other attractions here, we were late and it was time to leave. I had slightly less than two hours to spend there, but it was an invaluable time nevertheless.

Thanks for reading. I look forward to your comments and questions. 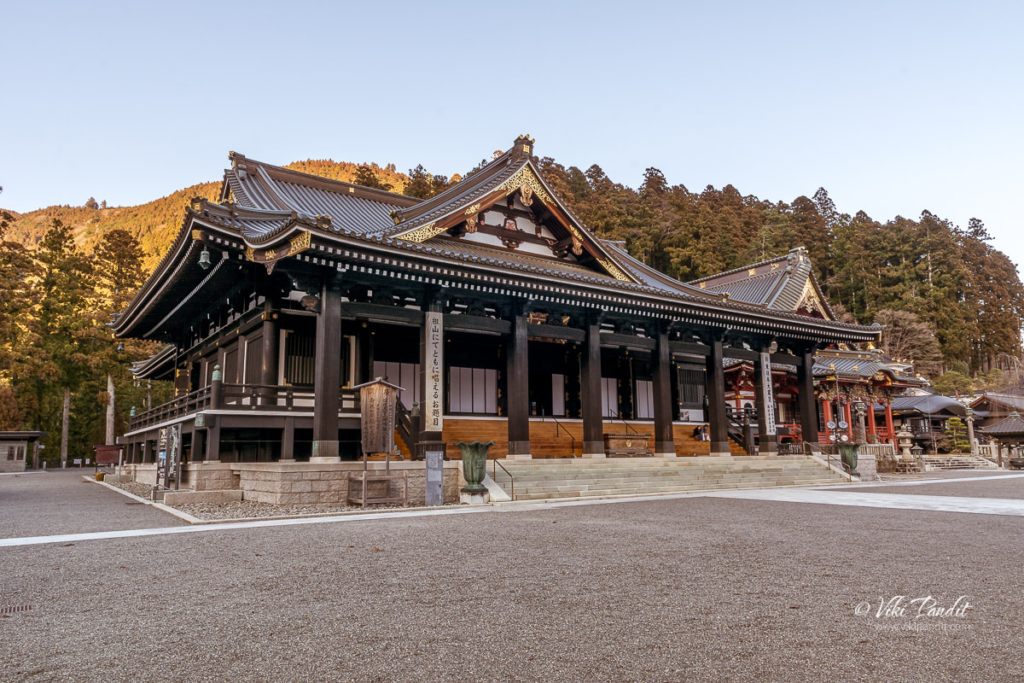 Places to see near Yamanashi