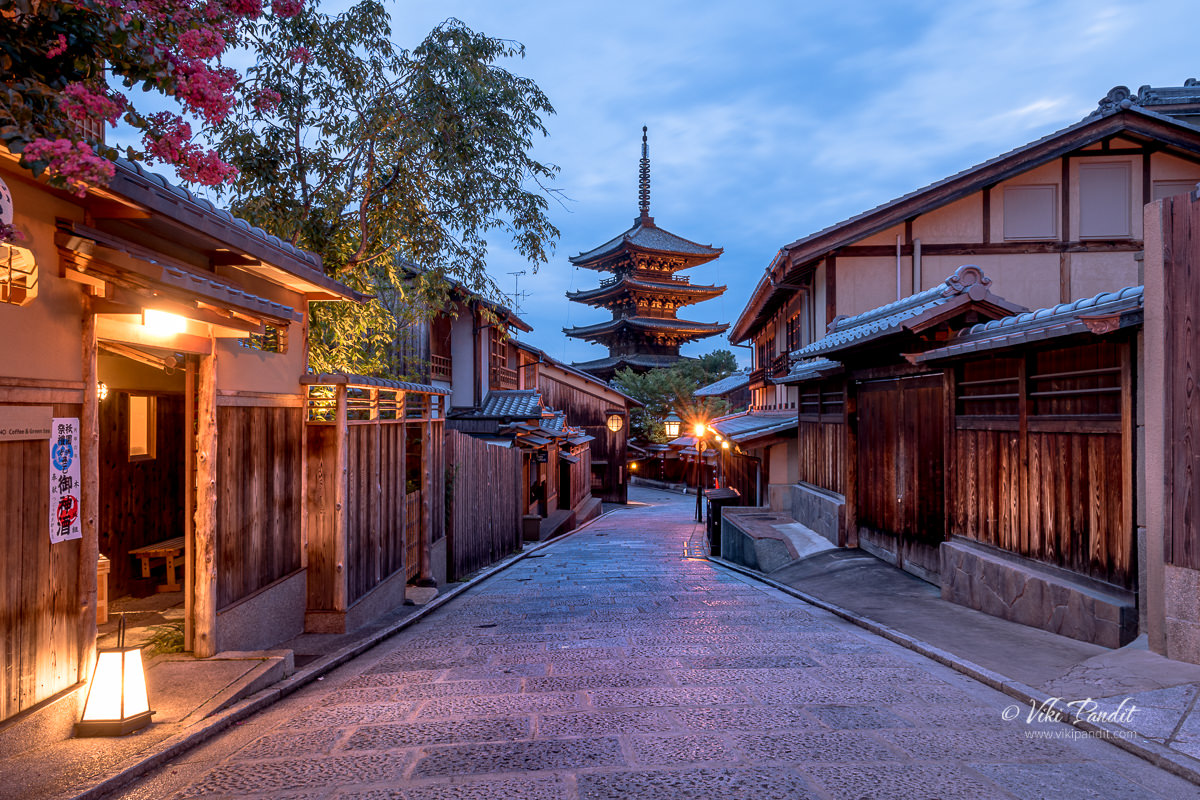 Today we take a walk down to Yasaka-dori in Kyoto to the stunning Yasaka-no-tō Pagoda. Built in 592 CE, the Pagoda with the temple treasure (Yasakato-ezu) is the last remaining structure of the once flourishing temple of Hokan-ji. The rest of the structures have either been destroyed by fires or earthquakes over the years.

Kyoto has many attractions for the wide-eyed tourists. The Kinkaku-ji Temple, the Kiyomizu-dera Temple, and the Fushimi Inari-taisha being my favorites, but if you are photographically inclined, the Yasaka Pagoda is not to be missed. With its old city charm and cobblestone paths, the surroundings of this mystical place takes your breath away, especially during the evenings when the pathways are illuminated in a golden glow from gas-lit street lights.

How to reach Yasaka Pagoda from Kyoto Station

I and my wife, Mani, were coming in from Nara, another heritage city with hundreds of ancient temples and shrines. Nara is around a 40-minute ride on the JR local to Kyoto. If you are coming from outside to tour Kyoto or even staying there, it is best to start from the JR Kyoto Station. You will be able to obtain the current Bus time-tables at the tourist information center inside the station. You can also buy a full-day bus ticket from one of the vending machines that allows you unlimited travel on the public bus for a day. If you are planning to go to more than two sight-seeing points, it is best to obtain the full-day pass. From the station, you can catch either Kyoto City Bus #100 or #206 to reach the pagoda.

The bus dropped us off at the Kiyomizu-michi bus stop. Since we were only going to the Yasaka Pagoda, we didn’t go for the full-day bus pass. The one-way ride cost us ¥230 per head.

As soon as you turn your back towards the bus, you will feel transported to a timeless past. This is the Higashiyama District and the Yasaka pagoda lies in the heart of this district. From the bus stop, it is about a 5-minute walk to the pagoda.

Of the mountains surrounding Kyoto, the ones which are closest to the present downtown area lie towards the east. This is why this whole eastern region of Kyoto is called Higashiyama which literally translates to eastern mountains. Since ancient times this area has been rich in Buddhist temples and Shinto shrines.

The Higashiyama District along the lower slopes of Kyoto’s eastern mountains is one of the city’s best-preserved historic districts. From ancient times, the mist-shrouded slopes of Higashiyama and the hills bordering Kyoto on the east, have inspired generations of poets and artists.

These 36 peaks are home to many temples, restaurants, inns, and tea shops – all picturesquely located along narrow winding streets. The shops that line these streets are always crowded, but it is not like the crowds in India. It is a much relaxed and silent gathering.

Visitors can enter the pagoda up to the 2nd floor for a price of ¥400.

Yasaka Dori (八坂通り) is a lovely, quiet path through the back streets leading to Yasaka Pagoda. It is an amazing place to walk around and explore the traditional old houses. Rickshaw drivers can be seen ferrying the wide-eyed tourists along this path. The area’s narrow alleys and machiya (traditional wooden buildings) are filled with small shops, cafes, and restaurants. The street runs between Ninen-zaka and Sannen-zaka slopes, and ends at the most iconic photo spot with the Yasaka pagoda looming over the cobbled path.

Long before the actual founding of Heiankyō, the capital of peace and tranquility, a tribe called Yasaka no Miyatsuko had immigrated from the Korean empire of Kōrai and settled at these foothills. Hokan-ji was most likely founded as early as 588 by this immigrant family from Koguryo, modern Korea. The Yasaka-no-Miyatsuko settled in the foothills of Higashiyama during the Asuka period & established the temple as their religious center.

Yasaka-no-tō Pagoda is also known as Hokanji Temple. It was built in 592, which makes it the oldest pagoda in Kyoto.

Their religious life centered around the Hōkan-ji Temple, a Buddhist temple built around 589. The temple itself has been long lost to fire. Of the precinct, only the pagoda is left standing today and is the most important vertical marker within the district today.

July is also the month of festivals in Japan. Saki Matsuri, the early festivities of the Gion Festival begins on July 10th and peaks on the 17th. We were just a day early but as we waited for the Sun to set over the lovely pagoda, troops of children in white attire rode down the cobbled street in makeshift carts. With them followed a horde of tourists flashing away their cameras.

Think of the saki matsuri as a way for downtown Kyotoites to welcome the deities to their town in a similar way as we Bengalis, welcome the goddess Durga into our city of Kolkata.

Once the evening started to set and the shops began to close, the huddle of tourists disappeared from the area and the streets were empty again. In the rare silence, I set up my tripod and quickly captured the most iconic landmark of Kyoto in the beautiful surrounding blue light.

Kyoto has four five-storied pagodas, which are located in temples around the city: Hokan-ji, Daigo-ji, To-ji, and Ninna-ji. Yasaka-no-tō Pagoda, also known as Hokanji Temple is the tallest among them and was built in 592, which also makes it the oldest pagoda in Kyoto.

There are various theories about the origins of the Hokanji Temple, but it is generally believed to have been founded in the Asuka period (593–710) as the guardian temple of the Yasaka clan. Although details from the early history of the Yasaka Pagoda are scarce, there is information about the fires. In 1179, the Pagoda was burned in a dispute between the Yasaka Shrine and the Kiyomizu-dera Temple. The temple was rebuilt by Shogun Minamoto Yorimoto in 1191. Later the records show that the temple again burned down in 1291 and 1436.

The current 49-meter tall five-tier pagoda is a reconstruction built in 1440 by Ashikaga Yoshinori and is a nationally designated Important Cultural Property. The construction and design of the pagoda were never altered, despite being rebuilt several times after different blazes.

The Yasaka Pagoda is dedicated to the five great Nyorai, who are depicted in sculptures and murals inside the pagoda. The epithet Temple Hikan-ji reveals in its suffix that it was not the main temple but rather a secondary one. At the base of the pagoda are four finely carved Buddha statues arranged around the points of a compass. Visitors can go inside the pagoda to view a dais on which are placed figures of Mahavairocana, Akshobhya, Ratnasambhava, Amitabha, and amoghasiddhi – the Five Perfected Ones; as well as the interior structure of the pagoda and the great central pillar supporting it.

The Yasaka Pagoda is said to contain some of Buddha’s ashes beneath its massive central pillar.

As it got darker, the yellow lamps from the street took over. The evening tourists had disappeared from the streets and the dim light from the street lights bathed the closed wooden storefronts. I felt as though I had stumbled upon a sleeping 18th-century town when life was a lot simpler.

Did you know that to make this view perfect, all the electric and telephone lines were moved underground?

The rather narrow street west of the pagoda runs straight north to the southern entrance of the Gion Shrine, renamed Yasaka Shrine in 1868, the first year of Meiji.

Around the pagoda, there are gently sloping hill east towards the mountains. The cobbled street here is known as the Sannen-zaka, the “Three Year Slope”. To the north is the Ninen-zaka, or “Two Year Slope”. Both streets were paved with stones in about 808.

The Higashiyama area doesn’t have a lot of tall buildings, so the pagoda is a landmark in the Higashiyama area. The pagoda is surrounded by traditional Japanese-style houses so if you go there, you can feel the history of this area. It was dark, I took one last shot of us to keep as memorabilia, and then we made our way back to the Kiyomizu-michi bus stop.

After a small wait at the bus stop, we were able to catch a bus back to Kyoto Station.

Note: The bus back from here is always full and the less weight you carry, the better it is for you.

Over the centuries, millions of pilgrims have passed along these streets, stopping to buy a charm, sip a cup of green tea or purchase a Kyoyaki (Japanese pottery traditionally from Kyoto). This is a great place to experience the traditional Kyoto, where the narrow lanes, wooden buildings, and traditional merchant shops invoke a feeling of the old capital city.

If you are visiting the pagoda, only a short walk away, on the border of the historic Gion district, lies the ornate red-and-white gate of the Yasaka Shrine. Open 24 hours a day, the shrine is one of the most popular shrines in Kyoto.

Thanks for reading. Please leave me a comment if you liked my story or follow my travels as I go on a day tour of Shimane to explore the perfectly manicured gardens of Adachi.

When was Yasaka-no-tō Pagoda built?

What are the entry timings of Yasaka-no-tō Pagoda?

What is the entry ticket price for Yasaka-no-tō Pagoda? 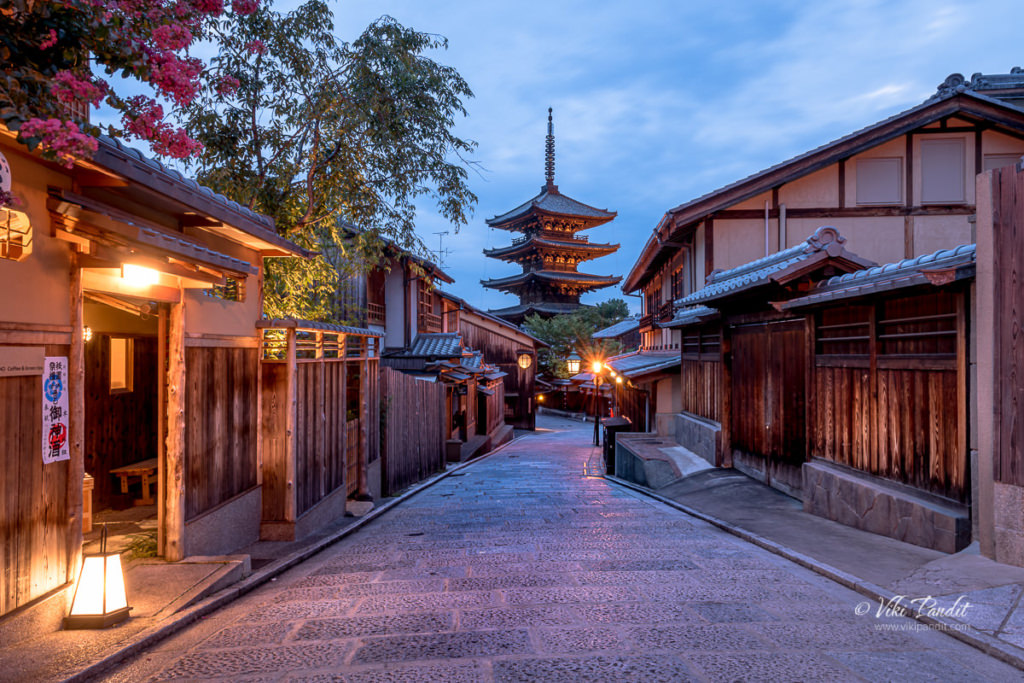 Places to see near Kyoto