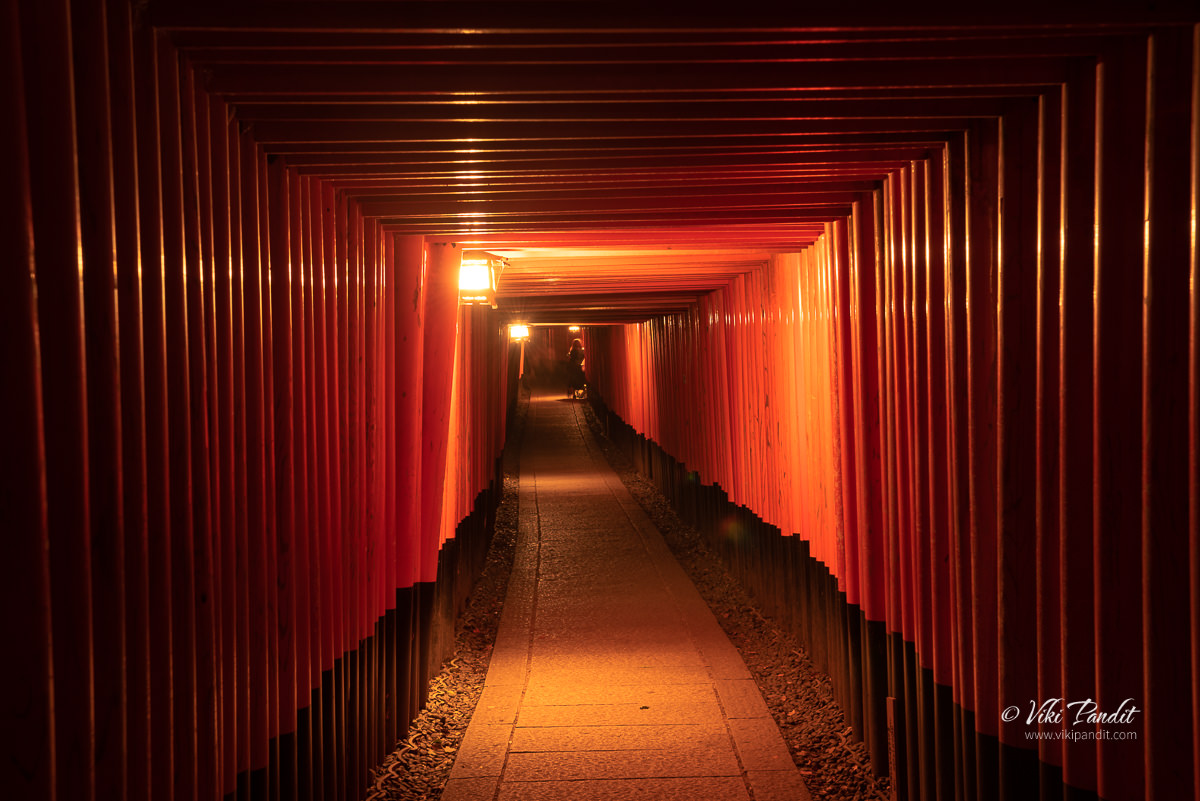 The first time I visited Fushimi Inari Taisha was way back in January of 2016. Since then I have been to the heritage site a couple of times but I never came around to writing about it.

Fushimi Inari-taisha (伏見稲荷大社) is the head shrine of the Kami Inari, located in Fushimi-ku area of Kyoto. The shrine sits at the base of a hill also named Inari, which is about 230 meters above sea level. Most of the larger structures are located right at the base, however for the adventurous types, numerous trails lead right up to the summit of the Inari mountain where you can find some very old and interesting shrines.

The trail is about 3 km and pretty easy to climb. Along the way you will witness hundreds of smaller shrines, some freshly painted and some in somewhat debilitated state. The most intriguing part of the hike however are the thousand vermilion colored gates called Torii.

Visit to every Japanese temple or shrine starts with passing through an exorbitantly designed gate. Most of you would be coming to Fushimi Inari-taisha from Kyoto via the JR train line. As soon as you get off the train at the Inari Station, you cannot miss the huge Torii gate that leads to the main shrine grounds. The shrines close proximity to Kyoto makes it very easy to reach but that also means massive crowds. My recommendations would be to reach as early as you can.

Torii, the ubiquitous gates that form an integral part of every Shinto shrine, vary from shrine to shrine in terms of both size and effect. Made from bronze, stone or wood, they are typically constructed to from a horizontal beam – kasagi, supported by two cylindrical columns called hashira.

The wooden ones are always colored in bright vermilion. Though commonly built at a scale that comfortably fits a small group of people, they range from miniature torii placed on shrines by worshipers to mighty structures such as this gate leading to Fushimi Inari Taisha.

Beyond the Torii, you will find the entrance gate to the shrine guarded with statues of foxes. These foxes are considered as the guardian spirits of the Inari shrines and messengers for the gods.

Fushimi Inari Shrine is dedicated to Inari, the Shinto deity of rice cultivation and business success. This deity grants a wide variety of prayers, from gokoku hojo (better crop output) to shobai hanjo (business prosperity), and in some regions of Japan, anzan (safe childbirth), manbyo heiyu (being completely cured of any illness), and gokaku kigan (prayers for academic success). Owing to the popularity of Inari’s division and re-enshrinement, this shrine is said to have as many as 32,000 sub-shrines (分社 bunsha) throughout Japan.

The earliest structures for the Shrine were built as early as 711 CE on the Inariyama hill. The shrine was later re-located to the base of the hill in 816 on the request of the monk Kūkai.

The shrine became the object of imperial patronage during the early Heian period (794-1185). In 965, Emperor Murakami decreed that messengers carry written accounts of important events to the guardian Kami of Japan. These heihaku were initially presented to 16 shrines, including the Inari Shrine. The main shrine structure was built much later in 1499.

From 1871 through 1946, Fushimi Inari-taisha was officially designated one of the Kanpei-taisha (官幣大社), meaning that it stood in the first rank of government supported shrines.

The mythical Fox of Inari

Foxes (kitsune), regarded as the messengers, are often found in Inari shrines. Each fox statue holds a ball-like object representing the spirit of the Gods, a scroll for messages from the Gods, a key for rice storehouses, or a rice ear in its mouth.

One legend suggests that an agricultural cycle is similar to that of a fox’s behaviors and habits, and the routes of the shrine gates are considered to be foxes’ routes. Ancient Japanese people seemed to believe that foxes had mystical powers. So, this shrine’s foxes are believed to be messengers of the Gods.

In the Edo Period (1603–1867), local people established the practice of erecting gates along the path of the foxes on the mountain behind the shrine to protect and fulfill their wishes.

Unlike most Shinto shrines, Fushimi Inari-taisha, in keeping with typical Inari shrines, has an open view of the main object of worship (a mirror). The most striking feature of Inari worship (Inari shinko) is the diversification where the devotees do not simply worship the “Inari” but a separate form of Inari with its own name. Fox is the main symbol of Inari. Believers around Kansai generally use names like Saijo Inari.

Inari was first worshipped in the form of three deities and later from the time of the Kamakura period as five deities. The practice of enshrining three Kami (Inari Sanza) or five dieties (Inari goza) is found in many shrines besides Fushimi.

Daytime at Fushimi is fine. But because of its closeness to Kyoto, it is always crowded with the daily wide-eyed tourists. So this year when I decided to visit the shrine once again, I planned it specifically at night, when it truly becomes magical. The number of tourists also decreases significantly at this time and I can promise you that it will be a much better experience if you choose to do the same.

As you walk out of the train station, you will immediately notice an illuminated fox near the entrance gate carrying a rice stock in its mouth.

The first structure you see as you walk through the huge gate is the Gehaiden. This brightly lit structure is used for various dance performances during festivals.

Just beyound the huge entrance gate you will find the Gehaiden, illuminated brilliantly by the lanterns inside.

To its right, you will find a small narrow path that leads to the Azumamaro shrine. One one side you will find hundreds of omikujo and wooden ema plates hanging on the side wall.

Just behind the Gehaiden, lies the main shrine called Naihaiden. The main shrine is set at the back of the lower complex situated at the base of the mountain. After you pass the two-storied rōmon gate you will see the main shrine, a red building up a few stairs through the open stage of the prayer hall. There you can pay your respects by giving a small coin offering, ringing the bells, and praying by bowing twice, clapping twice, praying silently, and then bowing once again.

As you walk towards the back, you will find the Honden. This is where you can buy the souvenirs and ema plates. Ema (votive tablets for writing wishes on) are very popular in shrines and temples around Japan. People write their wishes and leave the tablets hanging up at the shrine where the kami (Shinto deities) can receive them. Usually ema have a more rectangular shape, but the special ema at Fushimi Inari Taisha are in a shape of a fox. These ema can be purchased at the shrine for 500 yen. When you buy the ema you write your wish on the back, and on the front you draw the face of the fox. It’s exciting to see all the ema lined up with the different faces that the visitors drew!

To the right of the image lies first of the giant toriis.

The highlight of the shrine is the rows of torii gates, known as Senbon Torii. The custom to donate a torii started to spread since the Edo period (1603 – 1868) to get a wish to become true or to thank for a wish that became true. Along the main path there are around 1,000 torii gates.

Those who know the  Fushimi Inari Shrine immediately think of the Senbon Torii, or the Thousands of red torii gates. It is said that there are about 10,000 torii lining this road up the mountain to the main shrine building. The sight of the torii all lined up is magnificent, and perhaps one of the most iconic views of Japan.

The huge gateways are of a brilliant vermillion and black and are engraved with inscriptions from the donors. At times tightly packed and at times irregularly spaced and several yards apart, the torii lead visitors on a 4km hike up, along, and down a steep hillside past an assortment of smaller sanctuaries.

Some 30 thousand toriis have been donated by various people seeking Inari’s blessing on their businesses. Merchants from all over Japan pay large sums of money to give a torii to the shrine. They are so close to each other, they form an almost perfect tunnel that completely conceals the outside world. Strolling up one of the torii tunnels, you feel lost in a magical red world. It is an almost unreal sensation that washes over you as you venture yet further into the mountains through this surreal passage.

As I walked along the path, the flow of gates overhead created a nearly constant feeling of progress, not unlike driving through farmland and watching rows of crops sweep by outside. In the beginning, where the torii were packed closely together into a tunnel, I found myself covering a great deal of ground without much thought. The torii continually divided the long space, drawing my attention to the sequence of columns and beams and the patterns of light and dark.

The spacing of the gates get spaced out more as we head towards the summit. As the torii spread out, the outside world returned. My feeling of progress continued, but my attention focused on the forest that I had entered almost without noticing.These gates are also not illuminated from the inside so you only have the lights from the street lamp posts to move around in the dark.

Inari was originally and remains primarily the kami of rice and agriculture, but merchants and manufacturers also worship Inari as the patron of business. Most of Fushimi Inari-taisha’s roughly thousand torii were donated by a Japanese business.

This is the Tamahimesha area where you can find many shrines dedicated to Inari.

Lit candles at a Kumatakasha shrine at the top.

This was as far as we went. We didn’t go beyond this point and started our hike back to the base of the hill. On the way we captured some shots of the torii.

As we reached the base, the Gehaiden was looking absolutely stunning in the night.

There’s something to be said about Japan’s almost seemless blend of new and tradition. Never have I seen such a balance of modernism from such an industrious country, all of their technological advances, infrastructure, media and corporate lives doesn’t depreciate their respect for tradition and history. Thanks for reading!

Rice has been very important for Japanese people for centuries, and farmers have always worked hard together to cultivate rice. It could be said that our Japanese group consciousness is based on this ancient rice cultivation culture.

In Fushimi Inari Taisha Shrine, you can get a brief glimpse of this ancient Japanese culture. The Shinto rituals for prosperity and good harvests include seeding, planting, and harvest festivals that are held respectively on April 12th, June 10th, and October 25th, the most important stages in rice growth.

The shrine is open 24 hours with both the approach to the shrine and the Honden (本殿, main hall) itself illuminated all night. There is no entrance fee.