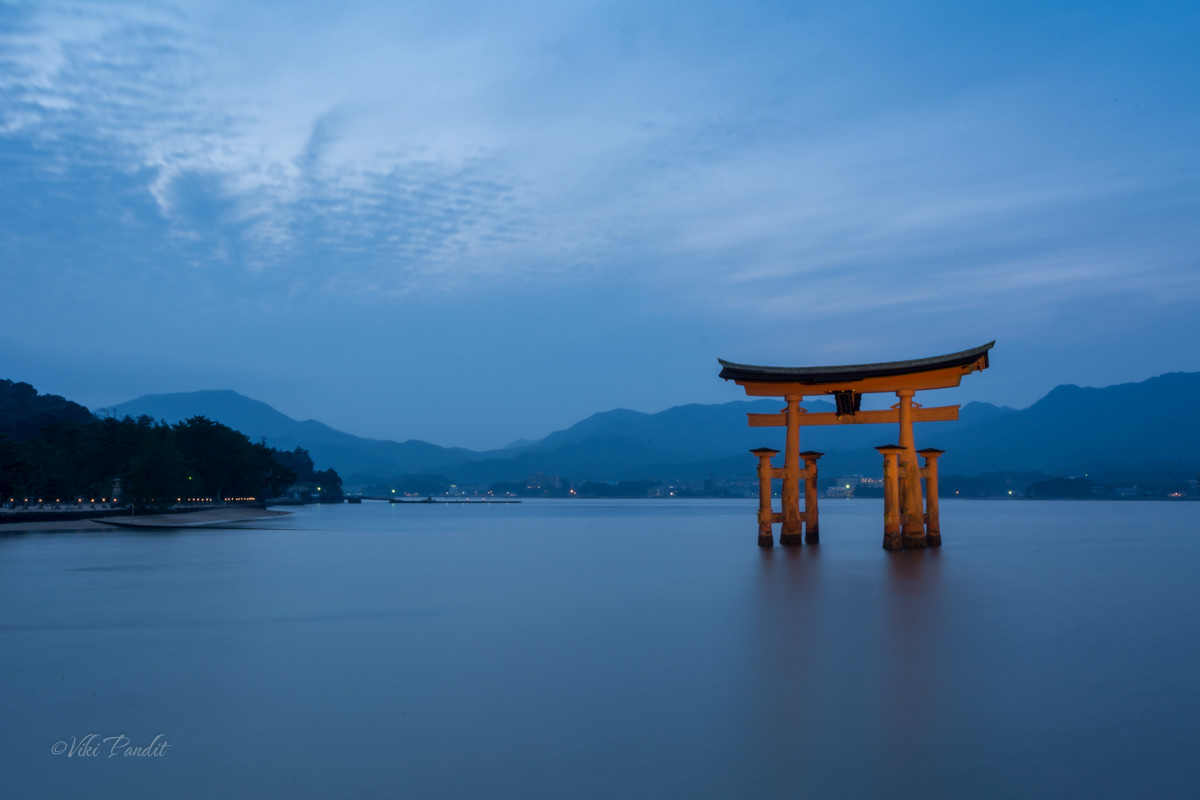 We were staying at the lovely Hiroshima Garden Palace Hotel. The all day travelling from the day before had sapped us of our energy so we woke up late. In the afternoon, we decided to visit the magnificent Miyajima Island I had heard so much about.

Miyajima is a small island located less than an hour away from the city of Hiroshima. Located in the Seto Inland Sea, ten miles southwest of the Hiroshima, the island is sacred for both Shinto and Buddhist practitioners. The island’s real name is Itsukushima (厳島), but it is known more by its popular nickname of Miyajima which means “Shrine Island”. Before heading to Miyajima, we dropped by at the Hiroshima Castle. We took an early lunch of fries with Takoyaki and Yakitori in one of the many food stalls on the castle grounds. After the sumptuous food, we took the train from JR Hiroshima station to Miyajimaguchi.

The train was crowded with tourists. Many, like us had come down to Hiroshima during the new years extended weekend. From the Miyajimaguchi station we walked down to the ferry. There are no bridges connecting Miyajima to the mainland and ferries are the only way to reach the island. The ferries from Miyajimaguchi. are run by JR and Matsudai at frequent intervals. The trip takes about 10 minutes and costs ¥180 each way. Japan Rail Pass holders can use the JR ferry for free.

As we reached the ferry station, one of the Matsudai ferries was readying to leave in a few minutes. We hurriedly purchased the round trip ferry tickets that cost us ¥360 per head and ran towards the pier to catch it. The ferry left in a couple of minutes. As we left the dock, we passed one of JR ferries, coming back from the island, carrying tourists back to the mainland.

The Matsudai Ferry runs every 15 minutes

On the ferry we stayed at the bottom deck, near one of the large windows with the view of the Seto Sea. We watched the sea as the ferry made its way amidst gentle waves. Even though it was afternoon, the bay was shrouded in mist.

As we got down from the ferry, we were surprised by the presence of this huge crowd on the island. There were queues everywhere. Food vendors on the roadsides were overwhelmed by the patrons. The souvenir shops were over-run by hordes of tourists. I have never witnessed such busy crowds in Japan, anywhere.

Miyajima is considered as a very holy place by the Japanese. In 806 AD, the monk Kōbō Daishi established Mt. Misen as an ascetic site for the Shingon sect of Buddhism. In the years since, the island’s Buddhist temples and Shinto shrines have existed in close harmony. In the past, the conservatives would not allow women on the island. The old people would be moved elsewhere to die, to keep the spiritual purity of the site, unspoiled.

We took the path to our right, walking along the seafront promenade towards the Itsukushima Shrine. On the way , I was also surprised by the large presence of deer on the island. In addition to its many beautiful temples, Miyajima Island is also famous for its freely roaming deer, many of which mingle with tourists and pilgrims walking around the temples. In Shinto religion, the deer are said to be sacred and  considered messengers of the Gods. But they are very naughty unlike their kin in Nara. One of them grabbed the paper map dangling from my cargo pocket and almost ate it. I had to really tug hard to make it give me back my property.

After walking down the path for a few minutes we were in front of the famous Miyajima Torii. The Torii (gate) was standing in the blue waters of the sea. Standing in the bay in front of the shrine, the floating Torii is the gate to Itsukushima. The Itsukushima shrine was just up ahead standing in the water as if floating on the sea. The tide had started to recede and part of the wooden stilts were showing below the shrine complex. Make sure when visiting Miyajima to go during higher tide, to view the Great Torii while it’s surrounded by water.

Itsukushima Shrine is a Shinto Shrine considered to be the boundary between the spirits and human world. Long before Buddhism came to Japan in the 5th century AD, Shinto sages lived as hermits in these mountain’s forested hills. This UNESCO World Heritage Site with its red-lacquered complex of halls and pathways on stilts, was originally so built so the commoners could visit the shrine without defiling the island with their footprints.

The shrine was flooded with enthusiastic tourists and we decided to stay away. I hate crowds. Places like these have a peaceful aura around them, you cannot feel that, surrounded by maddening crowds. We decided to walk around the area and come back later in the evening, hoping the crowds would disperse by then.

The beach looked inviting so we grabbed some prawn tempura and sat there watching the ducks swimming with the waves. While sitting on the beach, I noticed one of the deer grab a bag of food from a tourist. However the innocent deer was also eating away the plastic bag. I immediately ran and tugged the plastic away from the foolish creature. In spite of a feeding ban, tourists inadvertently feed them, which eventually results in a painful death for the deer.

After enjoying the tempura we wandered inland up the hill. After a few minutes, we reached the Hokoku Shrine, hidden within the trees at the edge of a hill. The inner part of this shrine, known as the Senjokaku, was constructed by the fabled Japanese warrior Hideyoshi Toyotomi for the souls of the warriors who died in war. Parts of the building, such as the ceiling and front entrance, remain unfinished because of the untimely demise of Hideyoshi. Just adjacent to Senjokaku, stands the vermilion colored five-storied pagoda built in 1407.

Also known as the The Hall of a Thousand Tatami Mats, Hokoku Shrine was built in 1587 in order to console the souls of those who died at war

We took some photos outside the shrine and then walked towards Omotesando Street. This is the main shopping street on Miyajima Island. It is filled with gift shops, restaurants, coffee shops, ice cream shops, candy stores, art and historical artifacts. The place was like a carnival. People were enjoying themselves.

The busy Omotesando Street has many souvenir shops and restaurants

Mani took me to the Kimono shop she visited way back in 2011. She was excited finding the shop was still there. We bought some souvenirs from the shops. Mani bought me a box of cookies. They were delicious.

You can get a good taste of the culture of Hiroshima from hanging out on this street. The area is like a maze of narrow streets.

Soon we reached the docks again. We had gone round a full circle without knowing. It was 4 pm. We went back towards the Itsukushima shrine hoping it would be less crowded by then.

The Torii looked lovely in the evening. Most tour groups were gone and sanity had been restored to the peaceful shrine. We walked towards the entrance of the shrine. The deer were still at it, harassing tourists for food. It was evening already and dusk was gradually creeping in. I captured the dying sun as it set behind the ancient forests of Mt. Misen. The battle between the sun and the darkness didn’t last long. As it grew dark, the shrine was lit up in golden light from the lanterns lining the seafront.

After taking some sunset photos, we hurried along to the shrine. The entry to the shrine cost us ¥300 per head. The Treasure Hall costs another ¥500, but we weren’t that interested in going inside.

The present Torii was built in 1875, and is the eighth Otorii in history

Miyajima’s primary temple, the Itsukushima shrine, was first constructed in 593 AD and later enlarged to its present size in 1168. The complex of buildings includes the main shrine, several subsidiary temples and even a Noh drama and dance stage. Weddings are occasionally held at the shrine. The shrine is dedicated to three Shinto goddesses of the sea, Ichikishima, Tagori, and Tagitsu, each of whom is believed to live within the inner sanctum of the shrine. No metal nails were used in the construction of the buildings and there are precisely calculated crevices between the floor slabs in order to alleviate the pressure of high tidal waves caused by typhoons.

Some of the ancient wooden planks used for flooring are 1.5 meters wide and over 10 meters long, and these enormous boards were laboriously brought down to Miyajima from hundreds of miles away in northern Japan. One of the bridges leading to the shrine is known as the Soribashi or Imperial Envoy’s Bridge. Constructed in 1557, it was used by court nobles sent to Itsukushima by the Emperor.

It was dark by then. In some distance on the hill, we could see the illuminated Pagoda. The stone lanterns were all lit and appeared like pearls along the circumference of the island. There are many smaller shrines positioned at intervals around the 19-mile circumference of the island. There are no roads to most of these shrines and pilgrims use small boats to approach these temples.

The beautiful Torii gate, standing in the sea and leading to the Itsukushima shrine was glowing in the darkness. The present Torii, the eighth that was constructed since the Heian period (794-1192), was built in 1875 with the wood of camphor trees. It is 16 meters tall, the roof is 24 meters long, and the main pillars are made from single trees. During the mid-July Kangensai music festival, colorfully decorated boats are sailed through the giant gate while dancers aboard the boats perform classical sacred dances.

The tide had revealed the base of the Torii. We got down onto the beach and walked up to the Torii.

The O-Torii (Grand Torii Gate), which stands in the sea about 16.8 meters in height is built of decay-resistant camphor wood

The island has many more attractions including Daisho-in Temple and an Aquarium, but I think to see all that one should stay back at the island for a night. It is not possible to cover all these in a single day. It was almost 8 pm by the time we left on the ferry back to the mainland. Note that from Miyajimaguchi, The last ferry leaves for the mainland at 10.14 pm.

It was an interesting day. We missed some places like the Daisho-in Temple but we also had a lot of fun in the streets of Miyajima and enjoyed many local delicacies. The island town still retains a classic Edo-era look. Deer wander freely through the streets and parks. Though some modern buildings have snuck in, the seafront promenade and the shrine look magical, especially later in the day when the rampaging tourists head home and the stone lanterns are lit.

Thanks for reading. Leave me a comment or follow my story as we hike up to the Peace Memorial Park in Hiroshima.

Places to see near Takimachi