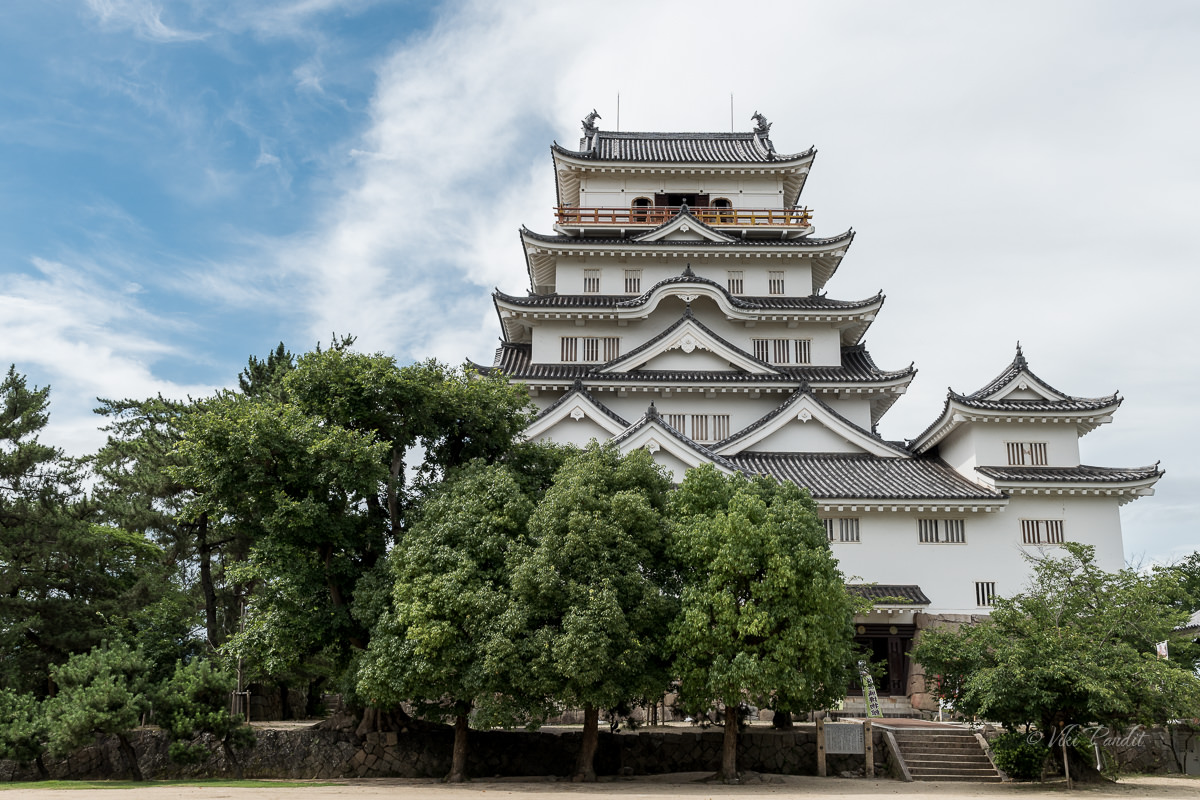 After a quick visit to the Hiroshima Peace Memorial I was on my back to Nara. It was still early in the day, so on the way, I decided to drop in at Fukuyama Station to explore the castle. I always used to adore this lovely castle from the comfort of my seat on the Shinkansen, when it used to stop at the Fukuyama Station. Today I finally get to explore it!

Fukuyama Castle was built in 1619 by the feudal lord Mizuno Katsunari, a younger cousin of Tokugawa Ieyasu, the shogun who unified Japan and established the Edo Shogunate. The castle is located in central Hiroshima Prefecture and is a leisurely stroll away from the conveniently located JR Fukuyama Station, which also happens to be a stop on the Shinkansen line.

It was around 3 pm when I got down at the Fukuyama Station. It is a sweet box-shaped, two-storeyed building.

In front of the station you will find a small garden dedicated to different colored roses.

The Castle lies on the other side, so I went back inside the station building searching for the other exit. The station may not look big from the outside but it houses many souvenir and cake shops.

The first thing I noticed as I exited from the back of the JR Fukuyama Station is this huge Information board. This detailed map of Fukuyama Castle Park helps immensely to plan your walk.

Information Board at Fukuyama Castle Grounds

A flight of stairs just next to the information board leads to the Castle Park, but I decided to go via the alternate route hoping to cover some extra area of the Park. The stone wall you see beside the stairs is the Sannomaru ( the castle’s third outermost enclosing wall).

As I moved towards the secondary gate I passed by a narrow stream that may have been a moat surrounding the Fukuyama Castle Park.

Withing a few minutes I found the side entrance. A short staircase surrounded by blooming flowers led me towards the Fukuyama Castle Park.

The stairs led me to this small wooden gate. I am not sure if it has any historical significance. With not a soul around, it was impossible to get any local information.

Just after the wooden gate I found myself on the premises of the castle park. There are benches are regular intervals. There are about 500 cherry trees at the castle grounds and thousands come to view the cherry blossoms when they bloom from late March to mid-April.

As you walk around the castle’s grounds and explore Fukuyama Castle Park you will come across many of its original ruins including the Castle gates and turrets. Sanzouinari Shrine, Bingogokoku Shrine, Fukuyama Museum of Literature and Fukuju Hall are also within a few steps of the castle’s grounds. Fukuju Hall has a pond, a teahouse, and beautiful garden that you can walk around. It’s also a great opportunity to take a seat, relax, and enjoy the towering view of Fukuyama Castle. Wandering around the park, I first arrived at the Sujigane Gomon Gate of Fukuyama Castle.

Below is a close-up capture of the rivets and the iron work on the Sujigane Gomon Gate. Most of the structures at the castle were destroyed in the air raids of World War II in 1945. Sujigane Gate is one of the two structures to have survived the ravages of time.

From the stone gate, I reached out to the main keep. Fukuyama Castle, also referred to as Hisamatsu Castle, is a five-story (six-level) castle. It is considered one of the renowned castles of the Edo period The history of Fukuyama Castle dates back to 1619 CE when the feudal lord Mizuno Katsushige became the ruler of the Bingo-Fukuyama domain, then known as Fukuyama Province.

The castle was built on a hill on the Fukuyama plain and it was the capital of Bingo Fukuyama Han. Construction of the castle was commenced in 1622 during the Genna era. The newly commissioned structure presented a grand sight with 6 floors with surrounding turrets and palace like residential elements. It used to be surrounded by double moats which provided an inlet to the Seto Inland Sea.

Many of the materials and buildings used to construct Fukuyama Castle were transferred from Fushima Castle in Kyoto under direct orders from Tokugawa Ieyasu.

The Fushimi Yagura of Fukuyama Castle

The beautiful castle turret (yagura in Japanese) managed to escape the destruction of not one, but two castles… Originally the yagura was built as part of the Fushimi Castle in Kyoto (hence its current name “Fushimi Yagura”). But after the castle was demolished by order of the Tokugawa shogun, the turret was dismantled and relocated here, in Fukuyama, becoming part of the newly constructed castle. Fushima Turret is listed as Important Cultural Property of Japan.

The Tsukimi Yagura of Fukuyama Castle

Katsunari was well known as a very brave general and his subjects called him “Oni-Hyuga” which means “the demon of Hyuga.” Apart from being brave, he also carried out flood control projects and looked after the castle towns prosperity. Since the 17th century it has played an important role in Japanese history and was one of the greatest castles of the Edo period.

The Mizuno clan maintained control over the castle from its construction until 1700. Thereafter the Castle passed through the hands of several feudal lords.

As time passed, Fukuyama Castle fell into disrepair after being abandoned and was eventually destroyed in a fire, but in 1966 the castle’s keep, observation tower, and tea house were all reconstructed. As the castle was being constructed, elements of Fushimi Castle in Kyoto that escaped destruction during the war such as the Fushimi observation tower and Sujitetsu-Omon gate were moved to Fukuyama Castle, allowing visitors to enjoy these national historic treasures even today.

The castle tower was also reconstructed in 1966 and opened as the Fukuyama Castle Museum, exhibiting articles and materials of successive feudal lords. The museum also features genealogies explaining the relationship between the Mizuno and Tokugawa families.

It was late and Nara was still a long way off, so I started my walk back to Fukuyama Station. This time I took the main route that takes you right in front of the Station. Along the path there were many flowering plants that beautify the landscape.

I came down the very stairs beside the Sannomaru wall, that I had seen previously near the Map Board. Fukuyama Station is built within the walls of the castle. When planning the construction of the Sanyo Shinkansen line, it was determined that running through the castle’s inner moat would be the shortest route and so the station was constructed right next to the Sannomaru.

While waiting for the train, I caught a last glimpse of the Fukuyama castle from the train platform.

The train to Osaka had some time so I waited. Fukuyama Castle is one of the very few tenshu that survived the Meiji Restoration, however it suffered extensive damage from Allied attacks in World War II. The main tower was rebuilt in part, thanks to the donations from the local residents. Today the area around Fukuyama Castle contains a park, a history museum, an art museum and other facilities, that help to spread the city’s history and culture.

Today the Castle is designated as one of the 25 National Historic Sites of Hiroshima and considered one of Japan’s Top 100 Castles from a list created by the Japanese Castle Foundation.

Waiting for the train at Fukuyama Station

Thanks for reading. I look forward to your reviews and questions. If you are looking to explore more of the Chūgoku region check out my journal on the Torii of Itsukushima or follow my story as I visit the great Buddha of Kamakura.

Fukuyama Castle is open from 9:30 am until 5:00 pm and costs 200 yen to enter for adults; students and children are free. Unfortunately, photography is not allowed inside the keep until you reach the top floor.

The top of Fukuyama Castle now serves as a viewing platform where those who climb to the top can get a look out over the whole area surrounding the castle. On the fifth and final floor you can venture outside on a balcony with 360 degree views. Here you can take pictures and enjoy a beautiful panoramic view of Fukuyama and its surroundings. 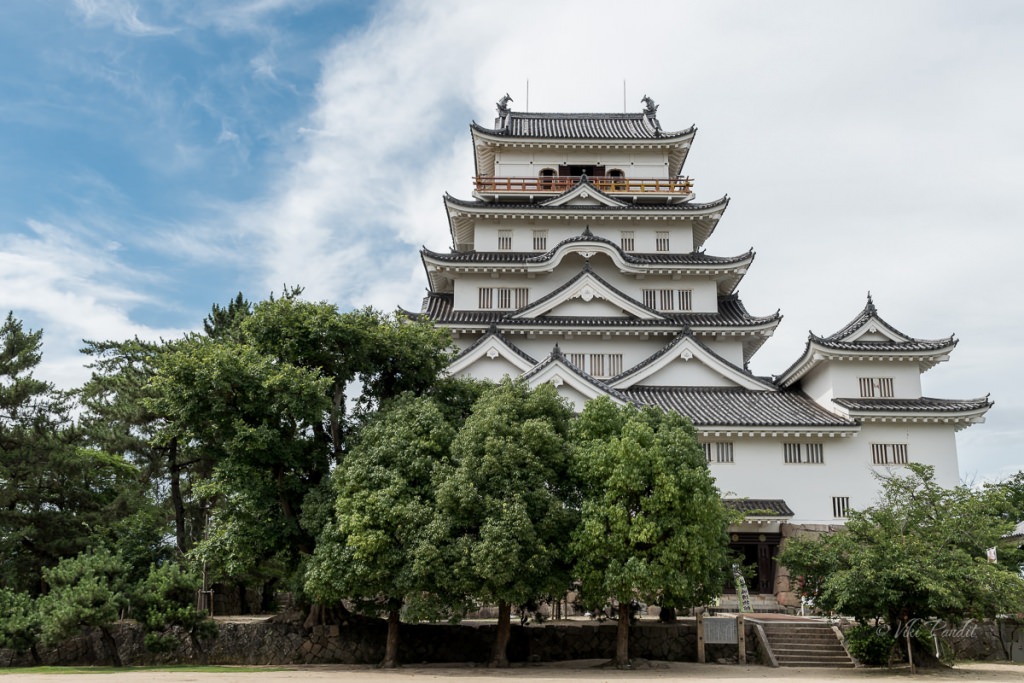 Places to see near Fukuyama Castle