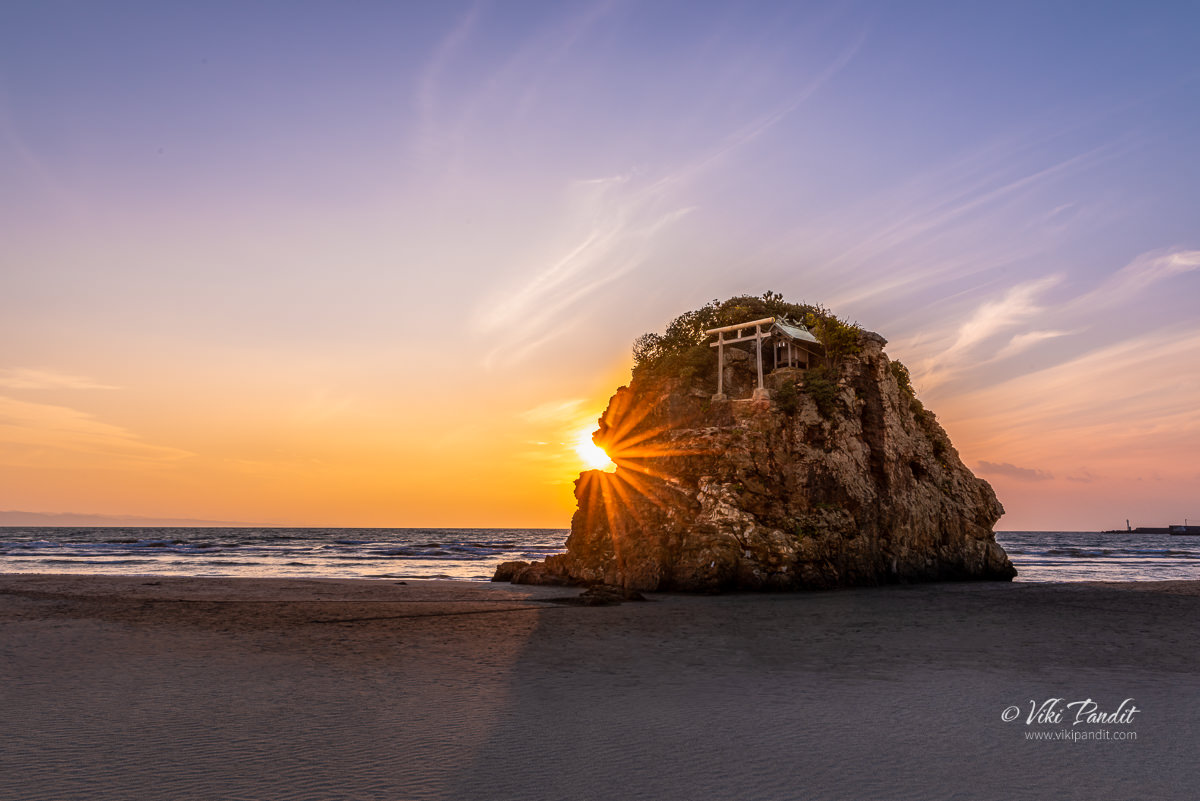 Inasa Beach (稲佐の浜) is one of the most sacred Japanese beaches located in Japan. It is mentioned several times in Kojiki, said to be the oldest written chronicle in Japan. The book written in ancient words and difficult to read even for the Japanese, speaks of ancient Japanese myths and the beginnings of the island nation itself.

According to the scriptures of the Kojiki, there are said to be 8 million gods. The Amatsukami (heavenly gods) were ruled over by Amaterasu Omikami, the sun goddess & the most important deity of the Shinto religion. Amaterasu is the daughter of Izanami and Izanagi who made their daughter ruler of the heaven. The Kojiki further states that the earthly world where the people lived was called Kunitsukami, and inside this very earth, exists the realm of the dead referred to as Yomi no Kuni.

After an entertaining afternoon in Hinomisaki we decided to drop in at Inasahama to catch its mesmerizing beauty during sunset. The bus dropped us off at Izumo Taisha stop and from there we just walked to the beach. You can also get down directly at the beach, it has its own stop. We just needed to get some refreshments and some souvenirs from the shops near Izumo taisha.

If you are coming straight from Izumoshi Station area, the bus ride costs about ¥540 per person. We had however previously purchased the “perfect ticket” which allows for a hassle-free travel on local buses. If you are in Izumo for a few days, I would recommend obtaining the “Enmusubi Perfect ticket” from the Izumo Tourist Information Center, inside JR Izumoshi Station. It enables you free rides on Ichibata trains and buses, including Matsue city buses for 3 consecutive days. The ticket also includes discount privileges at many tourist spots.

After walking for about 15 minutes to the west of Izumo-taisha Shrine, the Inasahama gradually emerges from the Sea of ​​Japan – a beach famous for the mythical story of the country’s inception.

The myth surrounding Inasa no Hama has many variations, but in essence, it is the tale of how Takamagahara (The realm of the Amatsukami) came to be united with Izumo (A kingdom of Kunitsukami).

Takamagahara is a place of heaven in Japanese mythology. In Shinto, Takamagahara is the dwelling place of the heavenly gods (Amatsukami). It is believed to be connected to Earth by the bridge Ama-no-uki-hashi (Floating Bridge of Heaven).

It is said Amaterasu Omikami, the queen of Amatsukami, took grave offense to see Okuninushi, becoming a king of the land of Izumo in the earthly realm. Since she saw Okununishi’s actions as inconsiderate toward the right to rule given to her by her father, Izanagi, she ordered various messengers and negotiators to Izumo, to cease and desist his activities.

It is said that the messengers of heaven clashed their swords on this very beach and negotiated with Okuninushi for the transfer of land to them. After several negotiations, Okuninushi eventually gave in to the desires of Amaterasu and her grandson, Ninigi no Mikoto-sama ascended to the rule of Izumo. In compensation, he was made ruler of the unseen world of spirits and magic on Earth.

As gratitude toward Okuninushi (or some say it was on a condition requested by him) she had Izumo Taisha built for him, and he was to have responsibility and jurisdiction over spiritual affairs, whereas Amaterasu Omikami-sama and her lineage would have responsibility and jurisdiction over physical affairs and government. Per this agreement, all of the kami, Amatsukami and Kunitsukami, would gather at Izumo Taisha every October to talk about affairs of the physical and spiritual. So the story goes!

Even today, the legend is inherited as “Kami-tei Shinto“, and on the 10th day of the 10th month in the lunar calendar, a bonfire is lit on the beach to welcome the 8 million Gods from all over Japan. Interestingly in all of Japan, the gods are away this month, so the month is called, “Kannazuki,” but in Izumo, where the gods gather, the month is called “Kamiarizuki.” Although there are no fancy illuminations or bursting of crackers, it is a ritual with a strict atmosphere that I would want to see at least once in my lifetime.

After the gods have been welcomed at the shore, people march to Izumo Taisha to the sound of flutes and drums with two sacred tree branches called Himorogi housing dragons, sea snakes, and gods at the head. After the celebration at Izumo Grand Shrine, it is said that the eight million gods stay in Izumo Taisha for a week, in the nineteen shrines to the east and west sides of the main shrine, as they hold a meeting, called Kamuhakari, on various matters related to human life.

Inasahama has a white sandy beach and a beautiful coastline. This scenic spot has been selected as one of Japan’s 100 Nagisa Beaches. On the beautiful beach, you cannot miss a small lonely rock standing with a miniature torii and a shrine on the top. The prominent round island at Inasa no Hama known locally as “Benten-jima.” In ancient times, it has been referred to as Okino Gozen and Okinoshima.

The Benten-jima Shrine is dedicated to Toyotama-hime, the daughter of Watatsumi – the God of the sea, and is said to protect seafarers. The beach itself, according to legend, was created during the Kunibiki land pulling, as the God Yatsukamizuomizunu used a rope to pull the land to Izumo and this rope later turned into the sandy Inasa no hama beach.

Benten-jima is not really an island as described by the name. The boulder used to be in the sea in ancient times, so the name “island” was given to it at that point in time. Until around 1965, it was only possible to reach Benten-jima using a temporary wooden bridge over the sea. However, due to changes in the tide, sand has gradually accumulated around the island, and now it is connected to the beach and can be walked to on foot.

Thanks for reading! Inasa Beach is a nice place to relax during the evenings. If you are visiting Izumo-taisha, do not miss this lovely place. It is just a 15-minute walk from the heritage shrine. If you like my story, please leave a comment or follow my story as I continue to explore one of the holiest places in Japan – Izumo taisha.

Places to see near Inasahama Beach