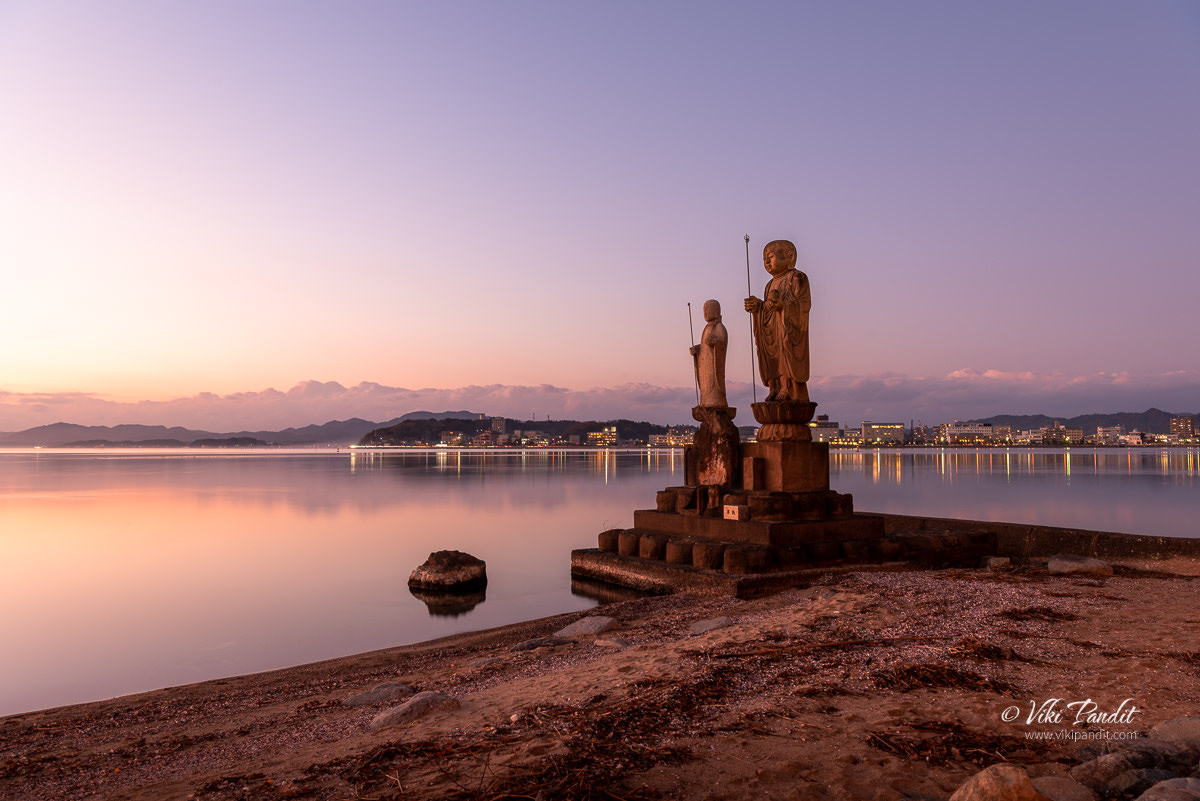 Lake Shinji is a lake in the northeast area of the Shimane Prefecture in Japan. The lake is the seventh-largest in Japan, with a circumference of 48 kilometers. It is enclosed by the Shimane Peninsula to the north, and the Izumo and Matsue plains to the west and east respectively.

We were staying in Nara. From Nara, we were traveling to Izumo for a short tour of the heritage city. The plan was to stop for a break at Lake Shinji and enjoy the beautiful sunset, it is very popular for.

Getting to Matsue from Nara

In the early morning, I and my wife, Ranita, caught the local train from Nara to Osaka. From Shin-Osaka Station, we took the Shinkansen to Okayama and from there we switched to the Yakumo 16 Limited Express bound for Matsue. The total time for the ride was about 4 hours. Since we were carrying our JR Passes, the full ride didn’t cost us anything.

Please note JR Passes are not entertained on Nozomi and Mizuho Shinkansen trains.

The ride to Matsue of course is something to talk about in itself. The train ride passes through deep forests and countless rivers, nestled in the mountains. In between, we would stop at small stations surrounded by a handful of cute houses.

For many of the Japanese too, this land of untouched beauty remains hidden, its charms, traditions, and secrets only known to the few who make the journey across the mountains, taking one far away, down through the ages to a deep, spiritual world of myth and folklore.

Mt Daisen on route to Matsue

After traveling along the beautiful Shimane countryside for a good part of the day, we reached Matsue Station at around 4 pm. During winter, it gets dark quite soon. It seemed a bit tight but we quickly stored our luggage in a locker at the station and caught a local to the Nogi Station.

From there we literally ran to the edge of the lake. If you love walking, you can also walk to the lake, but we were a little short of time, so we chose to take the train.

By the time we reached the lake, the Sun was just about to set. Hurriedly we walked to the sunset point from where it is the most beautiful to catch the dying rays of the sun over the lake. The view-point is marked on Google Maps, so a quick search will guide you to the exact place.

Lake Shinji is connected to the Sea of Japan via Nakaumi Lagoon. This causes the lake to have higher salinity than freshwater, but not as much as seawater. This results in an abundance of aquatic life, such as whitebait, eel, sea bass, and the most famous Lake Shinji delicacy, the Shijimi clam. The Shijini shellfish are caught using a “joren“, a tool unique to Lake Shinji, which is made up of a basket tethered to a rake. The shellfish is often referred to as one of the ‘Shiji-ko Shitchin‘, the “Seven Delicacies of Lake Shinji.”

The lake is assumed to have been formed about 10,000 years ago. The birth of present-day Lake Shinji was a major event in the history of the Izumo region. In the ancient book “Izumo-no-Kuni Fudoki,” written around 1200 years back, referred to the western bay as “Kando-no-mizumi” and the eastern part was mentioned as the Shinji Lake.

According to paleontologists, fluvial deposits from the Hii River may have literally cut off the sea from the Shinji Lake. Fed by numerous streams from the surrounding mountains, water from Shinji began to flow eastward to Nakaumi Bay. However, over a period of centuries, the rising water levels in the east, reversed the direction of flow thus transforming it into a brackish-water lake.

The Sun had already set behind the mountains. The beauty of the clouds, sky, and lake together has been a subject of fascination for many literary artists over the years. If you didn’t know already, Lake Shinji was chosen as one of the best 100 sunset points of Japan.

The small island you see in the middle of the lake is known as Yomegashima. Back in the 8th century when the Chronicles of Ancient Izumo was being compiled, it used to be called “Snake Island,” the reasons for which I am not sure of.

Stretching 110 meters east to west and 30 meters across, the island near the southeast bank of the lake and looks like a round slab of land that floats on the surface of the water. If you are able to zoom into the image above, you will be able to see a Torii among the pine trees. Being a sanctuary dedicated to the goddess Benten, the sacred Torii gate sits at one extremity of the island.

There is a myth attached to this island in the middle of the lake. It is said that a young bride was married off to a cruel family across the lake, and unable to bear their abuse, she decided to run away and go back home. In her hurry, she took a short cut across the lake that had frozen on the surface, but just as she was close enough to see the lights of her home village, the thin ice broke and she fell in and drowned in the icy waters. The gods took pity on her that they made the island spring forth in her honor. Hence, it is also called “Bride Island.”

The only time you can set foot on this island is in October when local guides can take you there explaining the legendary aspects of the island to visitors. You can take your time to wander about its 240-meter circumference.

If you are in Matsue in October, don’t miss the perfect silhouette of the Yomegashima island against the backdrop of the sunset once it is illuminated at night.

A swan swims past Yomegashima Island at Lake Shinji

In the old times, the locals were a bit worried that the island might be lost to the waves of the lake and so the island has been protected by rows of Jodei-ishi, designed by Kobayashi Jodei (1753-1813), a famous craftsman of the Matsue domain in the Edo period when Matsue was actively ruled by the Lord Matsudaira Fumai. Kimachi stone was used in creating theses Jodei-ishi, which is still taken today from the Kimachi area of southern Matsue to carve into lanterns are other such decorative items.

Kimachi stone is a special sandstone that is made up of volcanic ash and sand that had hardened over time. It is specifically found in the Matsue city’s Kimachi district near Shinji lake. The stone has a certain softness that helps in carving it more easily to create intricate details from the stone. Since the Meiji era, the stone works made from kimachi stone have been regarded as a necessity in landscape gardening, interior decoration, and other stone works throughout Japan.

After capturing a few shots of the Yomegashima Island, we walked further north towards a place where a couple of Jizo statues have been installed beside the lakefront promenade. The Sun was already down and it had begun to get cold very quickly.

As we neared our next destination, we could see some of the locals were gathered at its side basking in the beautiful evening. The larger Jizo statue on the left is made of Kimachi stone and is called “Sodeshi Jizo“, and the smaller one is made of Mikage stone and is called “Sekkai Jizo“. If you look closely, you can immediately notice the difference in detailing between the two different stone types. This pair of Jizo statues by the shore of the lake is almost as iconic as Yomegashima itself in Matsue’s famous sunset scenery.

The Jizo is a deity fondly loved by Japanese people. You will find Jizo statues mostly in Buddhist temples and graveyards. Sometimes you can also spot them standing at the side of the road in the countryside or at the corner of some streets in the cities. The statues in alignment with the Yomegashima island make for a wonderful composition.

It is believed that Jizo protects the souls of unborn babies and children who have passed away. In Japanese beliefs, it is thought that the soul of children who die before their parents, consequently bring suffering to their parents and cannot cross the river to the afterlife.

The Jodei-ishi that surrounds and protects Yomegashima were also placed around the Sodeshi Jizo to protect the base of the statue from the waves of the lake. As the natural lights dimmed out, the lights from the castle town of Matsue started to shine. By this time it was really cold. Some of the locals who had come to view the sunset were starting to disperse,

Within a few minutes, the daylight was totally gone. I got one last shot of the island in the middle of the lake before we started to walk to Matsue Station. I recall it was quite difficult to manage the buttons of the camera with the gloves on. I sure was glad we had bought a pack of kairo (hand warmers) from a local Daiso store in Nara just a day before we set off for Matsue.

The roadside lights had come on throwing a gentle yellow light over the promenade. Almost everyone had left by that time. The waves on the lake had also picked up some energy riding on the windy breeze. I zipped up my jacket and packed up my camera gear, all set for the walk to Matsue Station.

On the way, we passed the Matsue Art Museum which was obviously closed by then, but the illuminations were still on. There is lots to explore at the museum as well, but maybe some other time. On the way back to the Station, I guess I made a wrong turn and got us lost for a few minutes. With a little help from Maps, we were back on track in no time.

Once we reached Matsue Station, we caught the next express train to Izumoshi Station. The express train only takes about half an hour to reach Izumoshi Station compared to the local, which might cost you around an hour. I was a bit tired from the long travel and looking forward to a hot bath once I reached the Hotel.

What makes Lake Shinji particularly famous is its sunset view. There are many viewing spots around the lake, including the grounds of the Shimane Art Museum, or along the lakefront promenade. You can also enjoy the view from the lake on a pleasure boat, Hakucho for a sunset cruise.

Thanks for reading! From tomorrow we begin our exploration of Izumo, once considered to be the realm of the Gods, with a visit to the Izumo Taisha Shrine. Please leave a comment if you liked my story or need any information regarding traveling to Shimane. If you would like to connect, you can also follow me on Instagram.

How big is Lake Shinji?

What is the best time to visit Lake Shinji

Lake Shinji is most popular for its sunset views. If you visit in October you will have the extra advantage of seeing the island in the center of the lake as its illuminated towards the evening.

Places to see near Lake Shinji