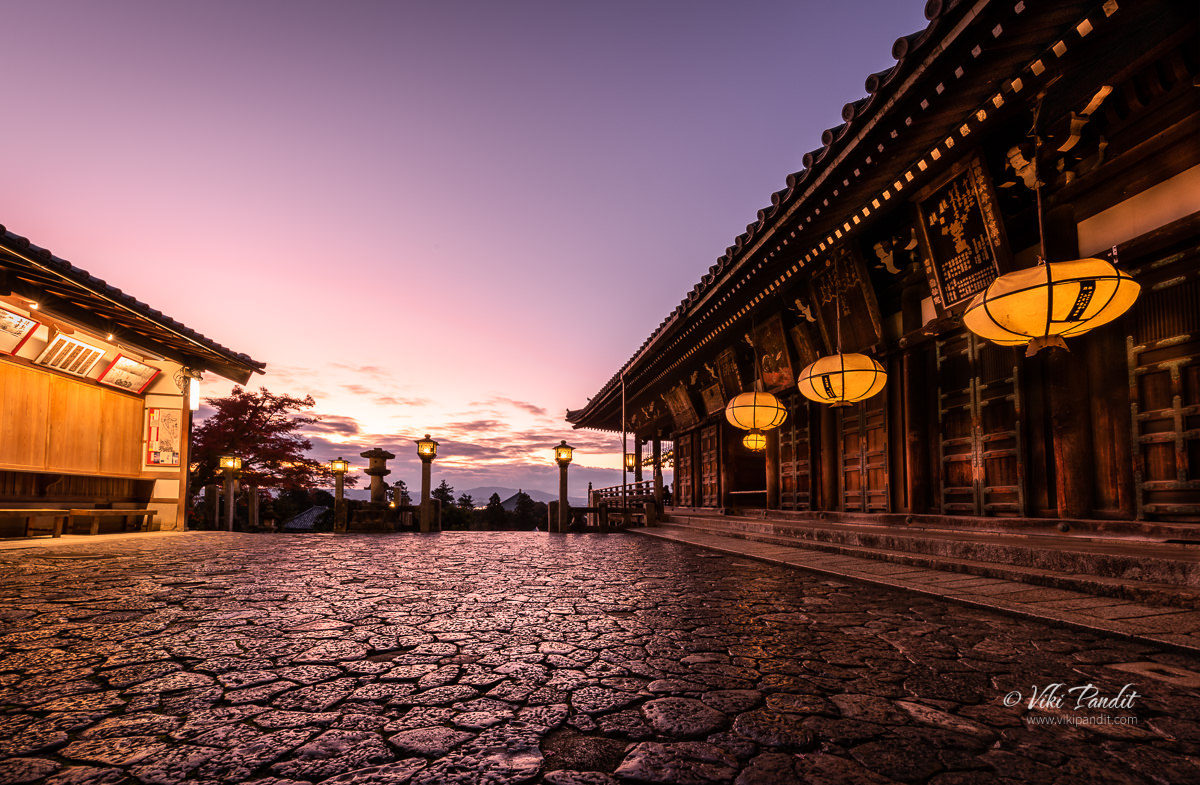 Nigatsu-dō is one of the important structures of the Tōdai-ji temple in Nara. If you are here to know more about Nigatsu-dō, you already must be familiar with the Todai-ji temple, registered as a world heritage site, and one of the most revered Buddhist temples in all of Japan.

I have visited Nara Park many times. Nigatsu-dō is located to the east of the Great Buddha Hall, on the hillside of Mount Wakakusa. Even though I had visited the Nigatsu-dō temple hall earlier, it was only after one of my friends on Instagram posted a picture-perfect view of the evening sunset from here, that it became an obsession to visit this temple again to witness the magic with my own eyes.

The quickest way to Nigatsu-dō is via the northern side of Todai-ji, past the Daibutsu-ike Pond. On this route, you can avoid the large crowds gathered around Nara Park. With wide open areas, the fresh, crispy winter air around the lake will surely awaken your senses.

December is almost the end of Fall season in Nara, but the roads were still lit up by the beautiful Momiji trees. Momiji or Japanese Maple Tree, is probably one of the most beautiful type of maple trees there is, especially in the fall. As temperatures cool down after the scorching summer in Nara, the colors of the leaves change into vibrant shades of orange, red, yellow, and brown.

We followed the road which after a few minutes leads to a narrow cobbled path that gradually goes up the Wakakusa hill. You can find signs in English that will guide you to Nigatsu-dō temple hall. As we approached the ancient hall, we were quite happy to see a deer lost in its own world, munching away at the dried grass.

The deer of Nara park are a symbol of the city and believed to be messengers of the gods in Shinto religion.

There are two ways up the temple hall. As you can see in the image below, you have a covered wooden walkway on the left and a stone staircase on the right to reach the platform at the top of the temple.

Nigatsu-dō was founded by a monk by the name of Sanetada in 752 CE. However the temple is more closely associated with a Buddhist monk named Jitchu. He is thought to have come from possibly in India. He was one of the founding monks of Todai-ji and introduced many of the rituals still used today.

The most noteworthy of these ceremonies was the Shuni-e repentance ceremony established by him in 1960, at the request of Empress Kōmyō, wife of Emperor Shōmu, who hoped to heal the ailing Emperor who had not been well for a prolonged period of time. Since then this rite has taken place as an annual ceremony without a break. This service came to be known as Shuni-e, as it was held in the second month of the traditional lunar calendar.

Before you take the stairs to the Nigatsu-dō hall, on your right you can find the Sangatsu-dō hall. It is considered to be the oldest building in the Todaiji temple precinct. It was founded in 733 CE by the priest Roben. The hall is also known by the name Hokke-do which comes from the practice of holding a yearly service for the Hokekyo sutra in March. Belief in Hokekyo, has been widespread in Japan since the time of Prince Shotoku (574 – 622), who desired to establish a united nation under the Buddhist Law with salvation for all sentient beings, as taught in the sutra. Sangatsu-dō in Japanese means “Third Month Hall” because the service here is held in the third month.

Similarly the name Nigatsu-dō, or “Second Month Hall” is derived from the fact that the Shuni-e Ceremony is held here during the second month of the lunar calendar. You can enter the Sangatsu-dō hall for a small fee to pray to Kannon. Photography is prohibited inside this hall. I had been inside the temple before, so I just went through the gate that took me up the stone stairs up to the Nigatsu-dō temple hall.

As you reach the top of the stone stairs, you will find yourself in a wide open area paved with cobblestones with a Chozuya at the far end. The Chozuya is a water pavilion near the entrance, for cleansing yourself before you approach the deity of the temple. Most of these Chozuyas are relatively simple with running water coming from a pipe, but this one contains an intricately carved bronze dragon head which spurts out the water meant for purifying visitors.

If you are visiting during Fall, you cannot help notice the surrounding vivid yellow Momiji trees just beyond the Chozuya, a little further up the wakakusa hill.

After washing my hands at the Chozuya, I walked over to the platform of the temple. The platform stands over the inclined hill helped by numerous wooden pillars, kind of like Kiyomizu-dera, albeit a lot smaller. Though the skies were a bit overcast today, the Sun would occasionally peak through and cast a beautiful glow over the front deck of the temple.

The observation deck of Nigatsu-dō

The Nigatsu-dō hall holds two Kannons, a large one and a small one, although both of them are classified as Hibutsu “secret Buddhas” – and therefore are not publicly shown. Hibutsu or “secret Buddhas”, are Buddhist statues that are kept out of sight, maybe not permanently but sometimes the intervals when they are displayed to public can be as long as 33 or 66 years.

Some hibutsu, such as the wooden statue of Gautama Buddha at Seiryō-ji in Kyoto or the Amida statuary at Zenkō-ji, are almost never displayed, even to initiates of the temples in which they are held.

Built on a hill, Nigatsu-dō has wonderful views from its observation deck back over Todai-ji and as far as the five-story pagoda at Kofuku-ji Temple. A magical mist had enveloped the heritage city. On a clear day you can see the whole city from here.

Through the mist, you can still observe the fall trees surrounding the Nara Park. The park’s autumn color is mostly scattered around the grounds in small pockets of deciduous trees, as opposed to being in one, breathtaking wall of color.

Nara City at Sunset from Nigatsu-dō

Since there are no other buildings around it, you can lean on the wooden railing and enjoy the cool breeze as it heals your soul. In addition, compared with the popularity of the main hall of Todai-ji Temple, Nigatsu-dō is much quieter, and the whole atmosphere is very peaceful.

You can sit down on one of the wooden benches inside and immerse yourself in the beauty of the sunset about to happen. There is no restriction on the opening or closing hours of the Nigatsu-dō so you can stay as long as you like.

As light begins to fade, the lanterns surrounding the temple hall are lit up. The once innocuous looking cobblestones begin to reflect the dying rays of the sun as they come alive.

The sparse number of people who know about the magic of this place at sunset were gone once the Sun had set over the horizon. The attendant at the souvenir counter near the stairs was also starting to shut down. I set up my tripod near the Chozuya to capture some of the beauty of the magical hour as the skies went from a vivid golden color to a more softer purple.

As the natural light faded away, the glow from the lanterns hanging around the temple hall became more overpowering.

Within a few minutes the skies changed again, this time into a beautiful blue. A couple of elderly ladies joined us at the observation deck. It was possibly their regular thing as I couldn’t see another soul otherwise.

Compared with the main hall of Todai-ji Temple, there are a lot fewer people who come to Nigatsu-dō, and it is very comfortable to stroll around. Because of the high terrain, one a clear day, you can overlook the entire city of Nara. The leisurely pace and the antique scenery are unforgettable and of course, when the sun goes down, it is just magical!

If you have plans to travel to Nara, don’t just use up all your time at the Todai-ji Temple, remember to climb the mountain and take a look at this beautiful and peaceful scenery of Nara.

Thanks for reading! I hope you like my story. Please leave a comment if you have any questions. Tomorrow we leave for Izumo to spend a few days in the ancient city that is known to be as the realm of the Gods in ancient Japan. On the way we plan to stop for a brief time at lake Shinji to experience another sunset, I hope the rain gods stay away!

Nigatsu-dō is particularly popular for the Omizutori ceremony that is held for two weeks from 1st to 14th March every year. The ceremony is held to cleanse the people of their sins as well as to usher in the spring of the new year. The ritual has been practiced non-stop since the Heian period, more than 1200 years ago.

During the event, priests with a torchlight in hand descend repeatedly from the Nigatsudo hall to the holy well at the base of the temple. Of the many events held during Omizutori, Otaimatsu, the fire torch is the biggest and the most impressive one at 6-8 meters tall.

When was Nigatsu-dō Hall built?

What is the best time to visit Nigatsu-dō? 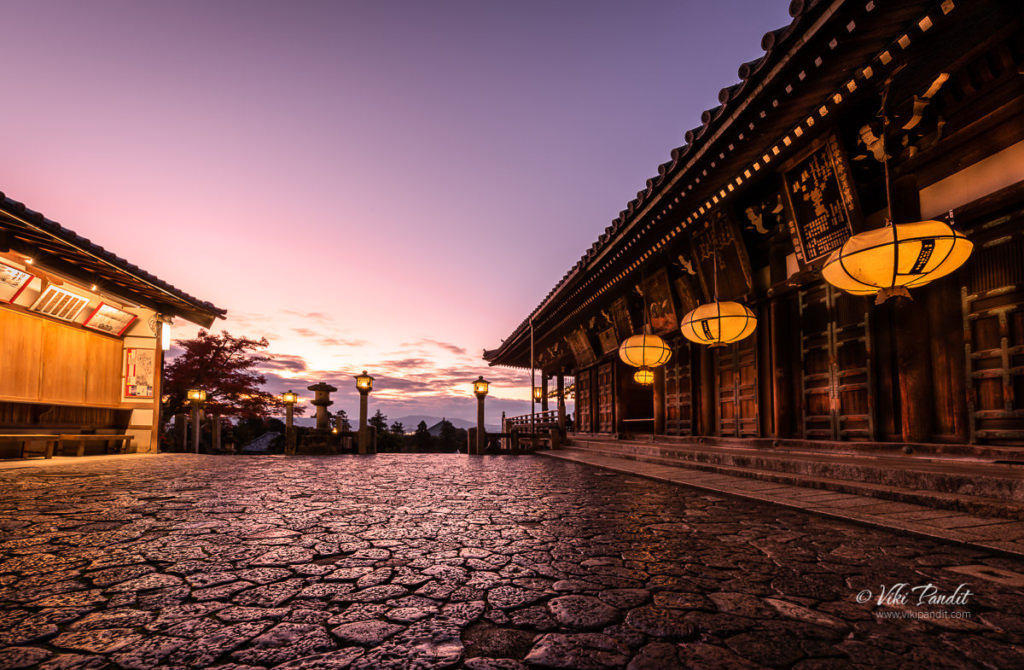 Places to see near Nigatsu-dō