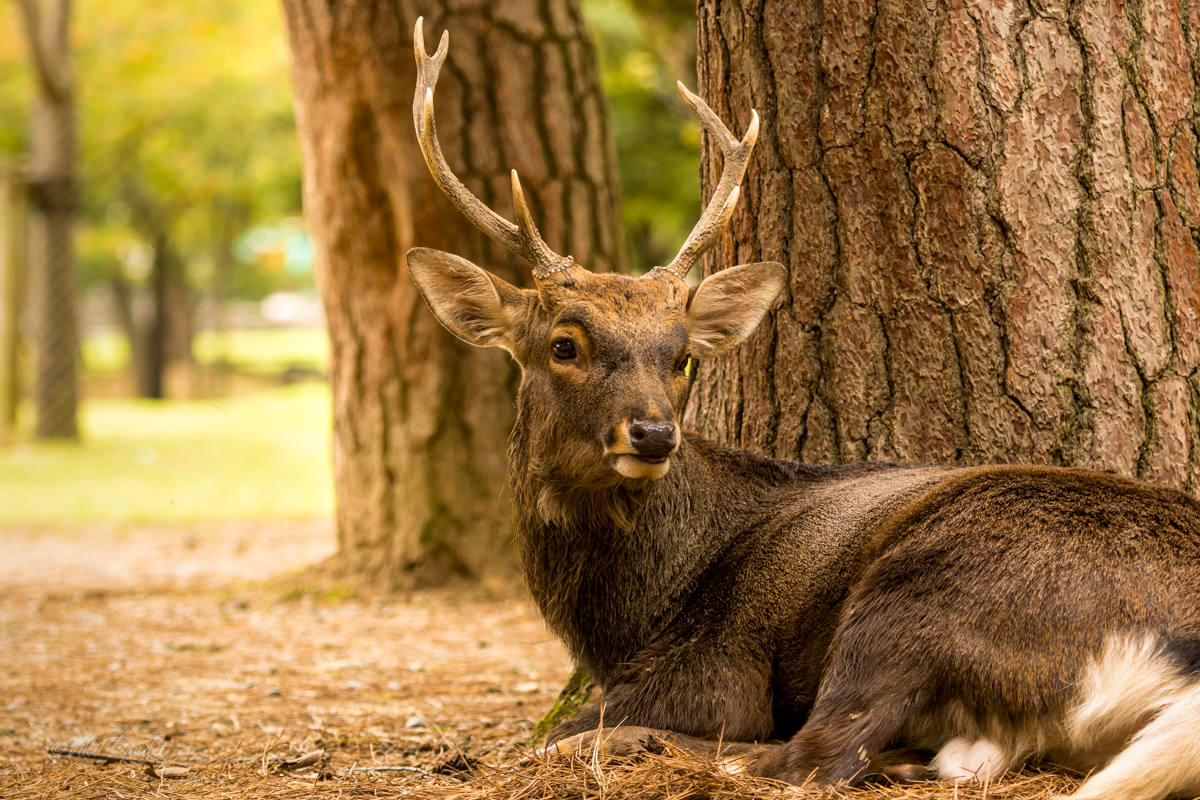 The sun was shining and it was a lovely day for a walk in the Nara Deer Park. Nara Park is a huge park in central Nara. Established in 1880, it is the location of many of Nara’s attractions including Todai-ji, Kasuga Taisha, Kofuku-ji, but the star attraction is the herds of Deer roaming freely all over the park. We left our home after a quick breakfast at Nara University Cafeteria.

Nara is best experienced by walking. The closest temple on the map is Kōfuku-ji, around 10 minutes walk from Kintetsu Nara Station. A narrow alley beside the Station connects the road to Kofuku-ji. The road to the temple is lined with souvenir shops and eateries on both sides.

Kōfuku-ji is a Buddhist temple that was once, one of the powerful Seven Great Temples, in the ancient city of Nara. The temple is also one of eight Historic Monuments of Nara inscribed on the UNESCO World Heritage List. The Kofuku-ji temple area contains 3 main buildings, the biggest being Gojunoto, the five storied pagoda. The first monument we noticed is a three-storied pagoda named Hokuen-do. A flight of stairs took us to  Tokon-do, another temple. Both Hokuen-do and Tokon-do have been designated National Treasures of Japan. There is a stone wash basin just before the Tokon-do temple where one can wash their hands in sparkling cold water. Before praying to the Shinto deity, worshipers are required to purify themselves of impurity. The washing of hands with water is called Temizu. Most shrines have similar stone wash basins where visitors can rinse their hands before approaching the deity.

Just beside the hand-washing fountain/basin is a wooden board where numerous people have tied their prayers on small wooden plaques. These plaques, sold at the Shrine, are called Ema. Worshipers buy the plaque, write their wish on it, then hang it on the Ema stand, in hopes the shrine deity will grant their wish.

The beautiful smell of incense sticks drew us towards the Tokon-do temple. I got one for Mani from a stall beside the temple. They cost 100 Yen each. Mani later told me that the incense was for “Happiness” There were others meant for praying for health and peace too. After lighting the incense, we went directly opposite, towards the five-storied pagoda.

Kofuku-ji was initially built in 1426 in accordance with traditional Japanese construction techniques. Since then, the present building has been rebuilt over time. It measures 50 m in height, making it the second tallest pagoda in Japan. We admired the awe-inspiring architecture for some time. I am short of words to describe the beautiful and majestic pagoda. I have never seen a more huge wooden structure in my life.

Kofuku-ji is the second highest pagoda in japan

A small path towards the back of Kofuku-ji directed us towards the main Park area also known as Nara Koen. The park is home to hundreds of freely roaming deer. Considered in Shinto to be messengers of the gods, Nara’s nearly 1200 deer have become a symbol of the city. According to the legend, Takemikazuchi-no-Mikoto, the kami of the Kashima Shrine in Ibaraki, was once invited to come to Kasuga Taisha, in Nara. He arrived in Nara riding a white deer, and since then the deer are considered sacred beings, divine messengers of Kami. Nara’s deer are tame, although they can be aggressive, specially the male ones, if they think you will feed them. Deer crackers are for sale around the park, and some deer have learned to bow to visitors to ask to be fed.

We walked past Kōfuku-ji on a narrow path laden with soft pebbles. We bought some Shika Senbei, deer crackers from one of the several stalls. The deer keep loitering around the stalls and they came running towards us as we walked away from the stall. The path opened up into a small meadow where several Deer young-lings were feeding on the green grass. We stayed there among the deer, feeding and playing with them. One of them softly landed a couple of head butts on me. It was fun and will be one of the fondest memories of my life.

After a while we got hungry too and went inside a Ramen shop to have some food.

There are various eateries surrounding Nara Deer Park. The food here was delicious.

It was late afternoon when we walked beyond the meadow, up towards the forested Wakakusayama Hill. The path up the hill took us towards Kasuga Taisha. The approach path is lined on both sides with scores of stone lanterns. The lanterns are lit up in times of festivals and it must look awesome. After walking for a few minutes the meadows gave way to a more dense forest as we climbed up the Wakakusayama Hill. Located a short walk towards the Kasuga Shrine main complex is the Kasuga Taisha Shinen Manyo Botanical Garden. This garden displays about 250 kinds of plants described in the Manyoshu, Japan’s oldest collection of poems which dates to the Nara Period. A large part of the garden is dedicated to wisteria flowers which usually bloom from late April to early May. The sun was on its descent so we decided to skip it, hoping to come during spring when the flowers will be in full bloom.

Kasuga Taisha is Nara’s most celebrated shrine. It was established at the same time as the capital and is dedicated to the deity responsible for the protection of the city. The shrine’s offering hall can be visited free of charge, but there is a paid inner area which provides a closer view of the shrine’s inner buildings. Kasuga Taisha is famous for its lanterns, which have been donated by worshipers. Hundreds of bronze lanterns can be found hanging from the buildings. The lanterns are only lit twice a year during two Lantern Festivals, one in early February and one in mid August. At the gate one can find many souvenir shops. Girls, dressed as beautiful priestess attend to the visitors.

There are many smaller shrines in the woods around Kasuga Taisha, twelve of which are located along a path past the main shrine complex and are dedicated to the twelve lucky gods. Among them are Wakamiya Shrine, known for its dance festival, and Meoto Daikokusha, which enshrines married deities and is said to be fortuitous to matchmaking and marriage. Rather than going inside Kasuga Taisha, we decided to walk along the forest towards these smaller shrines. The path kept going up. It was exciting walking by ourselves surrounded by the dense forest. After reaching  the end of the path at Shin-Yakushiji-Temple, we started our descent back to civilization. Back on the road, the tourists were sparse, so we decided to pay a quick visit to the Todai-ji temple.

Unfortunately the temple had closed at 5 p.m. so we just loitered around the grounds of the temple.

Todai-ji is one of Japan’s most famous and historically significant temples and a landmark of Nara. The temple was constructed in 752 as the head temple of all provincial Buddhist temples of Japan and grew so powerful that the capital was moved from Nara to Nagaoka in 784 in order to lower the temple’s influence on government affairs.

Along the approach to Todaiji stands the Nandaimon Gate, a large wooden gate watched over by two fierce looking statues. Representing the Nio Guardian Kings, the statues are designated national treasures together with the gate itself.

The Nandai-mon Gate at Todai-ji, watched on both sides by two fierce looking statues, guarding the gate.

It was going dark fast. We took some pictures of the gate. Towards the side of the temple is a lovely garden with wooded seats. The heavy camera bag had made me tired. We sat there for a while looking at the beautiful landscape. The slightly chilly winds at dusk felt really good. At 6 p.m. except for the street lights, it was totally dark, so we head back home.

I later went back for a photowalk to Todaiji a couple of times to witness the great Buddha in all its awesomeness. I was also lucky to celebrate New Years Eve at Todaiji when it is opened to public at midnight. If you cannot make it on new years, one can still enjoy a lovely walk in summer evenings at Todaiji when the park is illuminated. 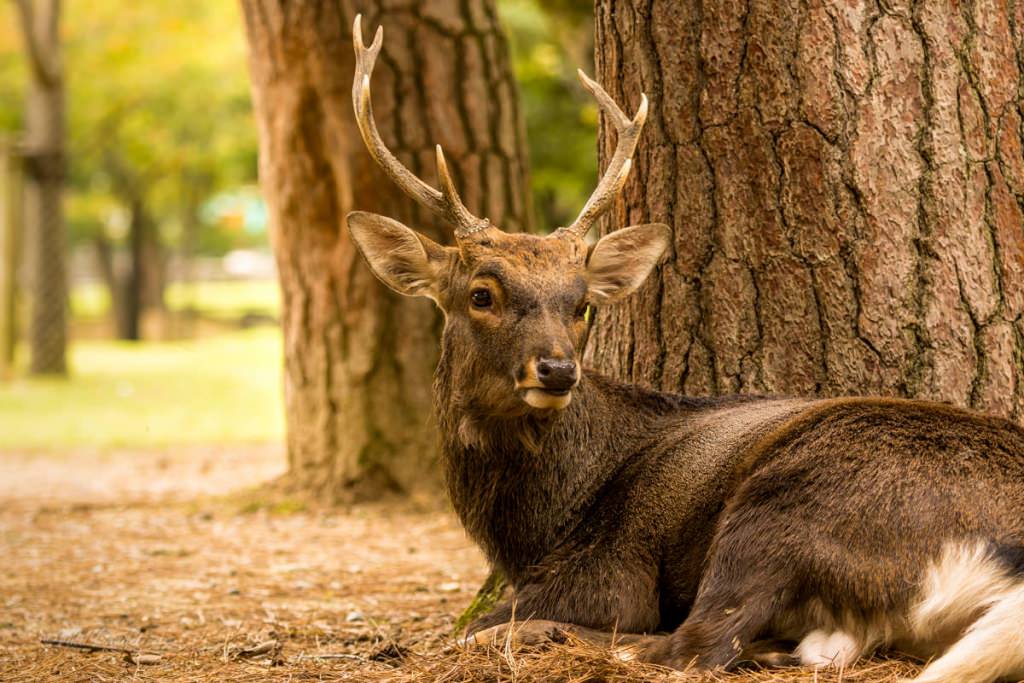