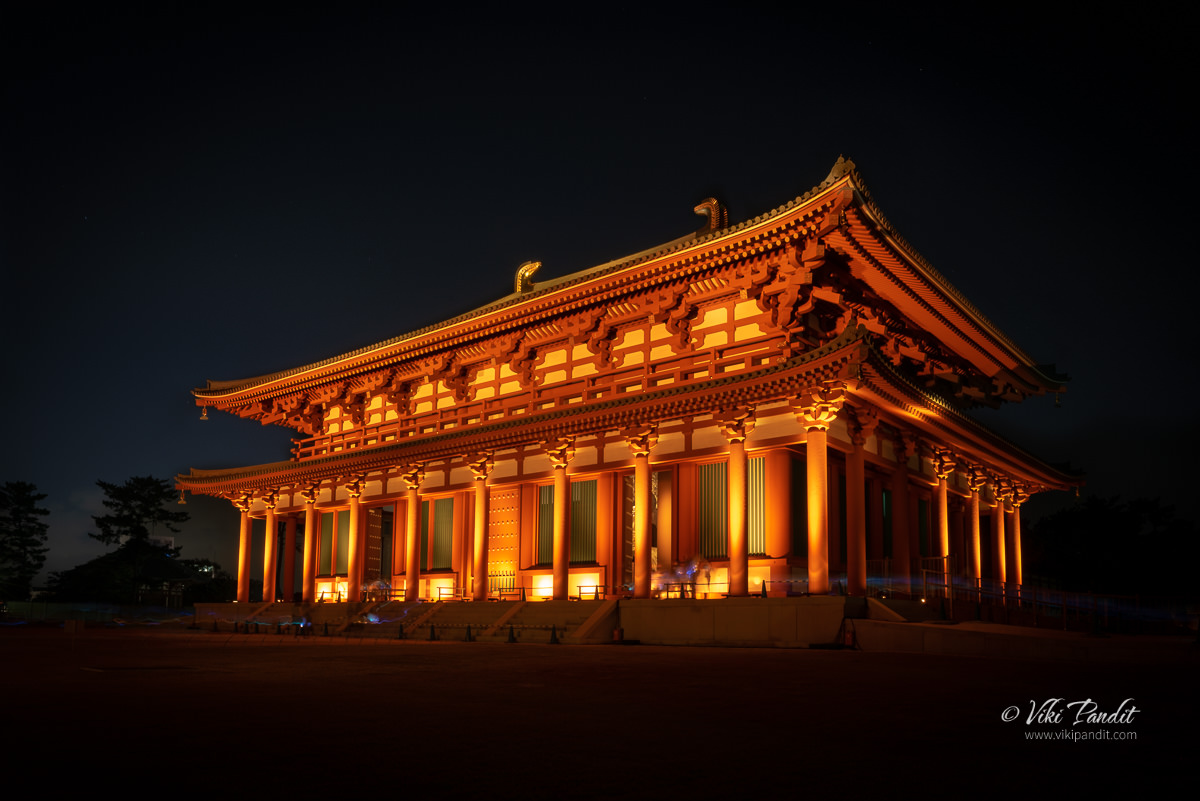 Kofukuji’s pagoda is both a landmark and symbol of Nara. Kofuku-ji used to be the family temple of the Fujiwara, the most powerful family clan during much of the Nara and Heian Periods. The temple originally is said to contain almost 150 buildings but only few have survived and many rebuilt over the years.

I had a quick breakfast at the University cafeteria and head off to Kofuku-ji on foot. I used the same approach we used the day before. This time I had brought along my 50mm lens for some close-up shots. I spent some time at the Buddha stone idols near the entrance stairs. The idol is completely made of stone. It reminded me of the stone idols from our Hampi trip. The Sun was soft and I was able to get some nice sharp images.

Up the stairs, people were praying in front of the Nanendo hall. Nanendo, the southern Octagonal Hall, was founded in 813 by Fujiwara-no-Fuyutsugu. There are two octagonal buildings at Kofukuji: the Hokuendo (Northern Octagonal Hall) and the Nanendo (Southern Octagonal Hall). The Hokuendo was built in 721 by the Empress Gemmei and the Emperor Gensho in honor of the first anniversary of the death of Fujiwara Fuhito. They both originally date back over a thousand years, and their present reconstructions were completed in 1789 and 1210 respectively. The buildings also house some of the temple’s treasured artifacts, but are only open to the public a few days a year.

A few steps ahead there is a flat base, where once Kofukuji’s main building, the Central Golden Hall used to stand. It was destroyed in a fire in 1717 and – although a replacement hall was built on a smaller scale in the 1800s – the original Central Golden Hall was not reconstructed. Reconstruction works are currently ongoing and are scheduled to be completed in the year 2018.

For me Kofuku-ji’s main attraction is the five-storey pagoda known as Gojunoto. At 50 meters, it is the second tallest pagoda in Japan after Kyoto’s Toji Temple. The construction of the temple was started in early 725 AD by Empress Komyoh, during the heights of the Fujiwara rule. Lots of women visiting the temple were in the traditional Kimono. It was a beautiful sight to see them walkin past the ancient temple.

Beside Gojunoto is the Eastern Golden Hall. It features a large wooden statue of the Yakushi Buddha. The Eastern Golden Hall (Tokondo) was originally constructed in 726 by Emperor Shomu to speed the recovery of the ailing Empress Gensho, and is dominated by a large image of Yakushi Nyorai (the Healing Buddha). Rebuilt in 1415, the Tokondo also houses a 12th-century wooden Monju (bodhisattva of wisdom).

The temple’s Treasure House (Kokuhokan) is one of the highlights, with displays of statues and artworks originally contained in the temple buildings. Among the most notable treasures are an 8th-century statue of Ashura (one of Buddha’s eight protectors) carved in the 8th century, an even older bronze head of Yakushi Nyorai, and 12th-century carved wooden statues of priests with strikingly human facial features.

While entrance to Kofukuji’s temple grounds is free and possible around the clock, there are two areas that require paying an entrance fee: Kofukuji’s National Treasure Museum and the Eastern Golden Hall. The recently renovated National Treasure Museum exhibits part of the temple’s great art collection and is an absolute must-see for lovers of Buddhist art. Among the many outstanding exhibits is the three-faced, six-armed Asura Statue, one of the most celebrated Buddhist statues in all of Japan. Unfortunately for me, it was closed on the day.

I stuck around for a while around the National Treasure Museum. Beside it is a small moat where if one notices carefully they can see some colorful Koi fish swimming in the water.