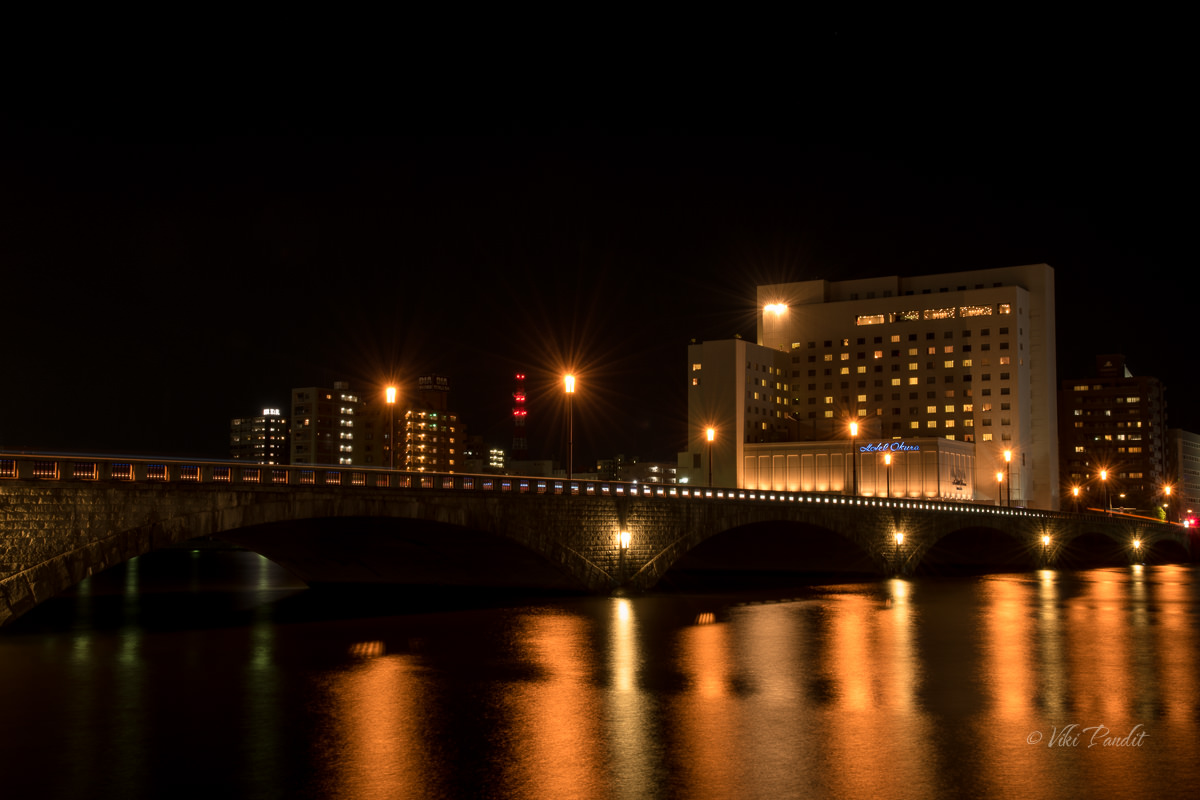 It was almost 8 pm by the time we arrived in Niigata. The JR Station, operated by East Japan Railway Company lies at the centre of Niigata city.

We had our reservations at the Hotel Lungwood. It’s right beside the JR Station. In fact one doesn’t even need to go out of the station building. There is a corridor that connects directly to the hotel.

Niigata is the largest city on the Sea of Japan coast. The city is blessed with an abundance of nature, surrounded by sea on one side and mountains on the other. On the way we had been already treated to one of the most jaw-dropping beautiful sunsets.

After dropping our luggage at the hotel, we went out for a walk towards Niigata city’s iconic Bandai Bridge (萬代橋) , a landmark that’s popular with both local residents and tourists alike. The bridge lights up at night, showing off its beautiful workmanship.

It was about 8 pm and most of the stores had closed for the night. We walked along the wide footpath following the trusted Google Maps. It took us about 20 minutes to reach the waterfront. The current Bandaibashi (as it is called in Japanese) was constructed in 1929, spanning the Shinano River in a continuous arch of reinforced concrete. In April 2004, the bridge celebrated its 75th anniversary and was designated as a national Important Cultural Property. This same year, much of the bridge was reconstructed to resemble its original model from 1886.

The Bandai Bridge is a prime example of large-scale concrete arch bridges from the Showa Period. The current bridge contains six arches and is made of reinforced concrete with granite siding, and was strong enough not to collapse during the 1964 Niigata earthquake which destroyed large sections of the city. Today the Bandai Bridge is considered the symbol of the city of Niigata and is one of the city’s most scenic spots, especially when lit up at night. We stood there for some time enjoying the light show.

Towards the north of the bridge one can find the Furumachi and Honcho shopping districts, and towards the south, from where we came, lies the Bandai shopping district and Niigata Station.  Below the Bandai bridge there is an underpass that takes to the other side to a verge along the banks of the river.

Along the river bank many groups of people were lying down, enjoying the cool breeze flowing across the river. A few stalls of food and beer were still open. I guess this is a very happening area of the city and lots of people come down in the evening for fun.

We got us some grilled chicken from a nearby convenience store and sat on the soft carpet of green grass overlooking the silent river.

The bridge lights had gone off at 9 pm but we were in no hurry to go back. The gentle breeze from the river forced us to relax for a bit more. The bridge has a long story with historical importance. The first Bandai Bridge was constructed out of wood in 1886, during the Meiji Period, and was the first bridge across the Shinano River.  Before it, people had to use boats for daily trade which was a big inconvenience. As the first bridge across the Shinano River, it encouraged trade between communities on the opposite banks. The original bridge was 782 meters long, the longest bridge in Japan at the time, and 2.5 times the current length as the river has grown significantly narrower since. After the destruction of the first two wooden versions, the third features a reinforced concrete design.

In March 1908, a major fire destroyed more than half of the Bandai Bridge. The second Bandai Bridge was completed in December 1909, and quickly became the transportation hub of the growing city of Niigata. The new bridge was built using planks recovered from the remains of the 1908 fire as a base, and was the same size as the original design.

Due to gradual dilapidation of the second bridge, a third version was constructed in 1929 using reinforced concrete. Because of water diversion projects along the Shinano River throughout the early 20th century, the water level at the time of construction had decreased from 770 meters to 270 meters since the construction of the first bridge. Because of this, the third bridge was far shorter yet wider in order to allow for easy passage of automobiles.

On June 16, 1964, a magnitude 7.5 earthquake hit Niigata, causing major damage to nearly all bridges on the Shinano River. Although the base of the Bandai Bridge on both sides sunk approximately 1.2 meters, the bridge was left intact.

In 1985, to celebrate the 100th anniversary of the first bridge, new lanterns were added to the bridge to decorate the night skies. A folk-dance procession is held annually as part of the annual Niigata Festival.

It was almost 10 pm and the area wore a desolated look. The waterfront was still simmering with the lights from the buildings on the far side of the river. We gradually made our way back to the hotel.

Please leave your comments if you enjoyed my journal or you can read about my visit to the Niigata Manga Museum. 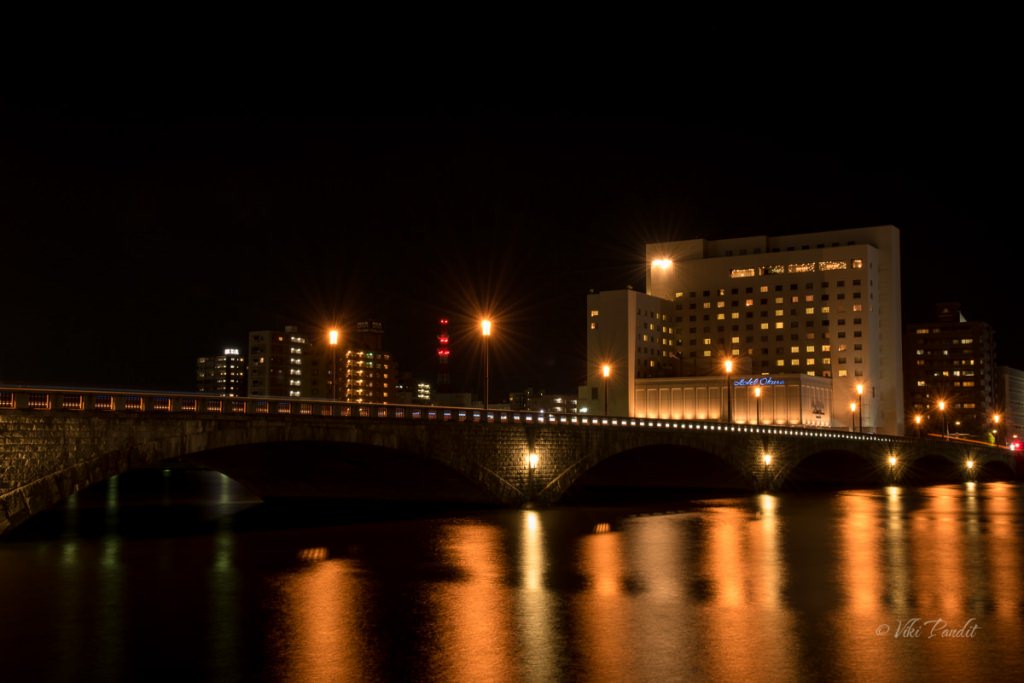 Places to see near Niigata-shi