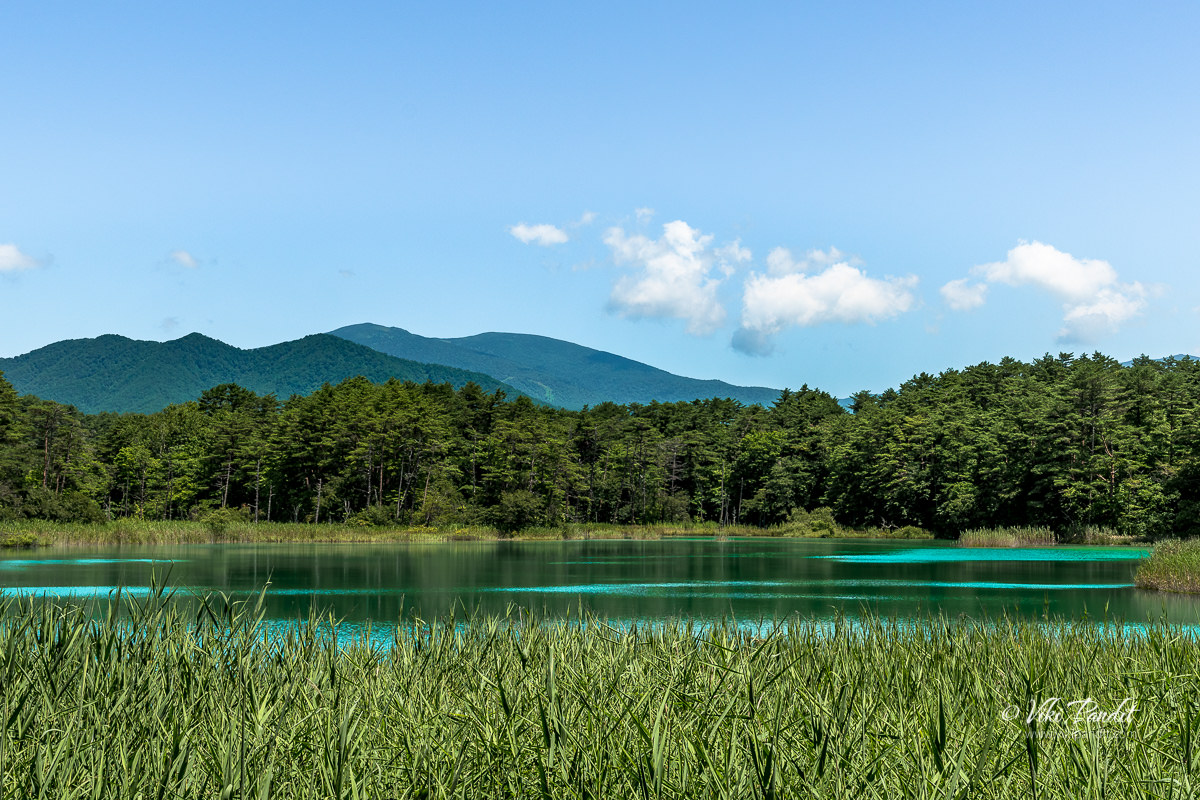 Today we go for a hike along the Goshiki-numa trail in Bandai-Asahi National Park, that runs along five gorgeous ponds. These ponds were created by the eruption of Mt. Bandai in 1888, after which the volcanic minerals dissolved in the water, imparting each pond with its own shade of color ranging from green to whitish blue.

We were staying in Aizu-Wakamatsu and spent the previous evening enjoying a most lovely evening at Tsuruga Castle grounds. We rose up early to catch the local train on the Ban-Etsusai Line and reached Inawashiro Station at around 9 am. It takes about half an hour to reach Inawashiro from Aizu-Wakamatsu and the ride is free for Japan Rail Pass holders.

Goshiki-numa (五色沼), is a cluster of five volcanic lakes and ponds situated at the foot of Mount Bandai in the center of the lake district of Bandai-kōgen, in Fukushima.

The prefecture of Fukushima is blessed with one of the most lovely countryside and the Bandai-Asahi National Park is the most beautiful feather in its cap. Visitors to the park can marvel at Mt. Dewa-Sanzan, which is famous as a site for mountain worship, gaze upon the peaks of Asahi, Iide and Mt. Bandai, or enjoy the beautiful sights of hills and numerous lakes and marshes from vantage points in the Urabandai area and Lake Inawashiro.

But none is more interesting than the Goshiki-numa Nature trail that walks you along five gorgeous ponds/lakes formed by volcanic activities in the region. These ponds were formed when the summit of Mount Bandai on the northern side collapsed due to a steam explosion. The subsequent rock avalanche blocked the river Aga, which led to the formation of numerous water bodies in this area. Goshiki-numa is just one of many such groups of lakes & ponds formed during the eruption.

From the Inawashiro station we took the Bandai Toto bus to the Goshikinuma-iriguchi bus stop. The bus takes about 30 minutes and will drop you right in front of the Urabandai Tourist Information center, which lies at the start of the Goshiki-numa Trail. The bus ride costs ¥720 (one way) and is not covered by the Japan Rail Pass.

The Urabandai Tourist Information center is large and well-equipped, and provides information not only about touring the area, but on the geography, wildlife and history of the area itself in various exhibits, including video. Urabandai (裏磐梯) literally means “behind Bandai” and we were told that at certain viewpoints we could see the peak clearly along with the ponds.

Sitting deep into the forest, this center provides luggage counters, maps and pamphlets in English as well as any other information you may need for the Nature walk. Toilets are also available at the center.

We dropped off our heavy suitcase at the center and after collecting the map of the Goshiki-numa area, we started on the walk.

Start of the Goshiki-numa Nature Trail

The first pond on the trail is the Bishamon-numa Pond. It was summer and the beautiful Ajisai was blooming. If you love Ajisai flowers, do visit Hase-dera in Nara for a brilliant show of blooms during summer.

A little up ahead we found ourselves in front of a most beautiful teal colored pond, though in my opinion it looks more like a lake.

The colors of these lakes mysteriously fluctuate throughout the year with the weather.

Boats along the Bishamon-numa pond

On the Bishamon-numa, row boats are available for hire. People were enjoying the beautiful weather on boats along the pond.

Boating on the Bishamon-numa in Fukushima

After admiring the beautiful Bishamon-numa Pond, we moved forward along the trail shown on the map. The trail is clearly marked and it was quite easy to follow the directions.

There are several vantage points around Goshiki-numa where visitors can enjoy breath-taking views of Bishamon-numa Pond. I personally loved this view point below that catches the lovely colors of the pond with Mt. Bandai in the background.

From here the trail moved into a wooded area surrounded by thick foliage. We were followed by other groups of Japanese along the trail. In fact all along the route we kept seeing more and more people, so it seems it is a pretty popular spot during summers.

Ranita hiking along the Goshikinuma Trail

At certain points the wood becomes so thick, its hard for the sunlight to get through.

Trees along the Goshiki-numa Trail

If you can get a little close to the pond, you can find colorful Koi swimming in the waters. Be sure to keep an eye out for the rare one with heart-shaped spots on its side which is believed to bring good luck!

Koi Fish in a pond along Goshikinuma Trail

After a while as we hiked up, the forest opened into a clearing. From here you can see a different angle of the Bishamon-numa Pond.

We gradually moved on along the stone path. It was also getting hotter as we were now into the afternoon.

The next pond on our trail was the Aka-numa Pond (Red Pond) . Although the name highlights its reddish-ness, its color is much more of a muddy green. Due to the high iron content of water seeping into the roots of the reeds, it imparts a reddish tint to the edges of the pond.

Along the trail you can find different variety of flowers blooming near the pond.

Flowers along the Goshiki-numa Trail

In the below close up photo, you can see clearly the reddish reeds along the edge of the pond. After taking a few pictures of the Aka-numa Pond, we moved ahead.

We continued on our hike through the forest. Along the hike I noticed many carrying small bells, making a tinkering noise. I later came to know that those bells were to keep bears away. Yes! Bears!! I don’t feel so safe now :O

The area is supposedly famous for Asiatic black bears but we were luckily, we didn’t get to meet any of them today. Many hikers swear by bear bells as a good way to keep from accidentally running into them but I have read of several accidents involving bears in the Tohoku region where the bells were of little help.

Viki hiking along the Goshikinuma Trail

About midway through the hike, we could hear the sounds of flowing water. After looking for sometime, we noticed this small stream of water flowing into a nearby pond.

Hike along the Goshikinuma Trail

When we came out again in a clearing, a light aqua colored pond lay in front of us. It is called the Benten-numa (Benten is the Japanese goddess of the arts and wisdom. It is undoubtedly the second largest of the five ponds.

The trail goes in a semi-circular path around the pond with several viewpoints to capture the breadth-taking colors of the pond.

Benten-numa, too, is surrounded by quite thick foliage so is a little difficult to get a good look out over, but, like Bishamon, features a backdrop of Urabandai mountains.

We were soon back into the woods.

We were soon at the Ruri-numa Pond (Lake Lapis Lazuli) . The Ruri-numa is named so for the deep, rich blue of its waters, which are probably the clearest of any of the Goshikinuma ponds.

It was here that I dropped my Nikon 810 for the first time. Yes, while entering this area, I slipped over the dusty rubble and lost my footing. It was a good thing that my Black Rapid camera strap kept the camera close to my body. Nothing happened to the camera except for some scratches on the bottom.

Viki on the Goshiki-numa Nature Trail

Fortunately the fall didn’t do much damage to this tank of a camera and I was able to keep clicking more pictures of this gorgeous lapis lazuli colored pond.

This was not as big as the other ponds

From here the Yanagi-numa is not very far off. Yanagi-numa (“Willow Pond”) lacks the sludge-filled bottom of the other ponds, therefore it lacks the “magic” hues and tints. However, the water is very clear and faithfully reflects its surroundings, making for another special kind of beauty.

The water in this pond was of a natural color.

So there you have it – a pictorial tour of the Goshikinuma Nature Trail. From this last pond on the trail you can choose to go ahead where you can find a bus stop to take you back. We however had to go back as we had left our luggage at the Tourist office. so we went back quickly along the same trail.

Boats along the Bishamon-numa pond

The bus arrived on time and we were back to the Inawashiro Station.

Waiting for the train at Inawashiro Station

We were on our way to Tendo, we we would stay for a night before advancing to the next stop on our Tohoku tour – Sendai. We had a lovely day at Goshikinuma Nature Trail. The name, Goshikinuma, as written in Japanese (五色沼 or five color ponds), is rather a misnomer. The area consists of many more than five ponds, and is also famous for displaying a much larger spectrum of spectacular colors.

The ponds have earned the name “Mystic Marsh” due to this characteristic. The sightseeing trail around the ponds is 3.6 km long and takes approximately 70 minutes to walk. Urabandai is also popular for autumn color viewing. Due to the wide range of elevations, colors can usually be seen somewhere during the entire month of October.

Thanks for reading! I look forward to your comments and questions. If you are looking to explore more of the Tohoku region, follow my story as I make a stop-over at Sendai and then go for a cruise over the beautiful Matsushima Bay. 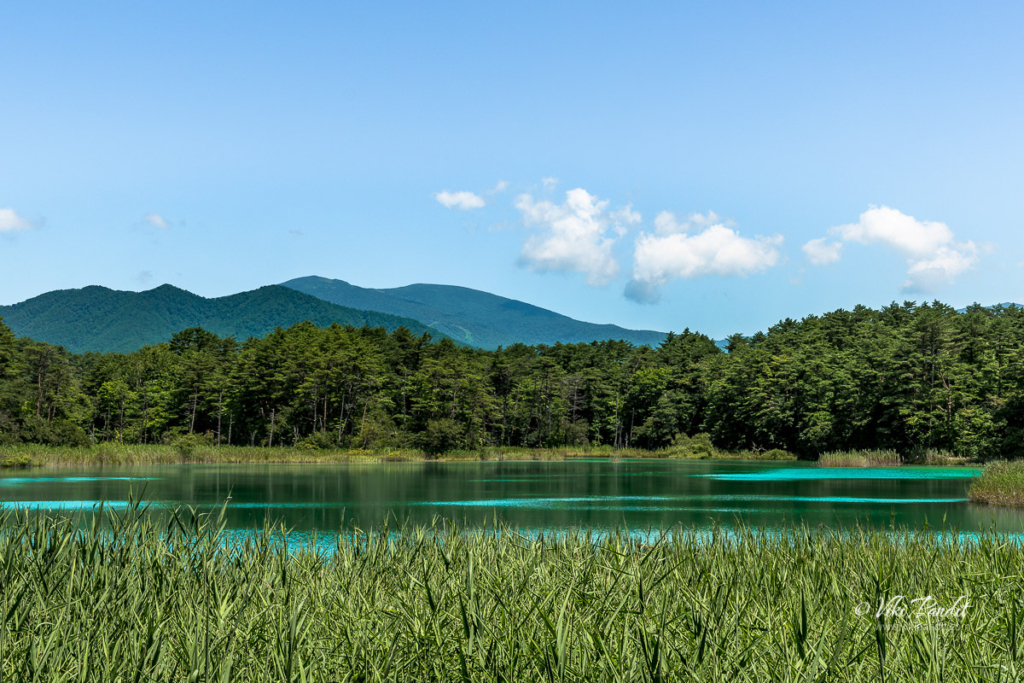 Places to see near Goshiki-numa