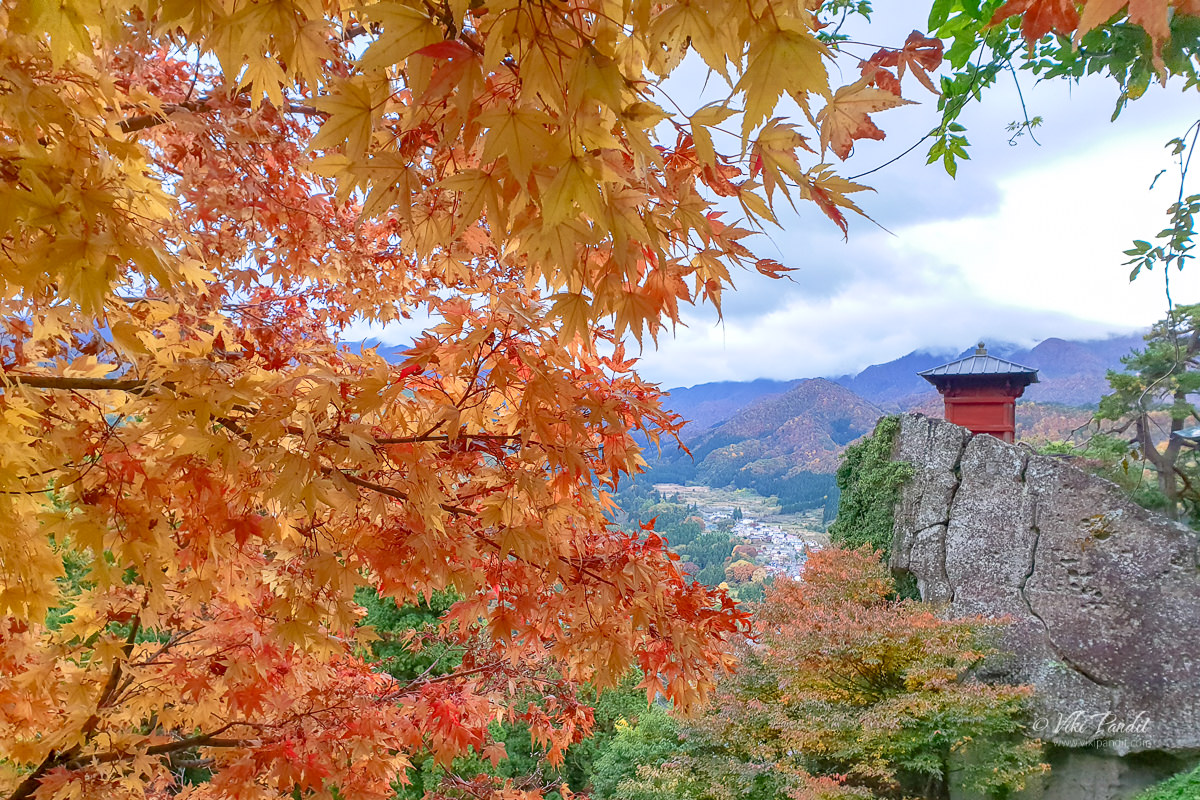 This journal is mostly about my Fall experience in Yamadera (山寺), a scenic temple located in the mountains northeast of Yamagata City.

When autumn deepens and the leaves begin to change color in the the fall months, hunting for autumn foliage has become a popular pastime in Japan. Watching my friends post the mesmerizing beauty of Autumn forced me to also schedule my tour to Japan during this time of the year.

Mind you, this need to visit far off places to appreciate the beauty of autumn has been a custom since ancient time as depicted in “The Tale of the Genji.” Even in the eighth century we have scenes that talk about how people used to search for beautiful autumn colors in the Heian Period. Yamadera is one such place to experience the vivid colors of Autumn as the surrounding slopes are enveloped in red & yellow foliage as far as the eyes can see.

This was my second visit to the lovely mountain temple. I have written in detail about the various structures inside the temple grounds when I went on a hike to Yamadera a couple of years before.

Colors begin turning in late September around Yamagata and usually peak in mid October. The weather had been lovely in the recent past as we traveled from Kansai towards the Tohoku region. Unfortunately the weather deteriorated rapidly as we reached moved north of Fukushima, .

On the day of our Yamadera visit, we woke up to see early morning showers. I was a bit perturbed by the thought of hiking up Yamadera in wet conditions, but the weather cleared up quickly.

Fall trees in the city of Yamagata

After a hearty breakfast, we walked down to Yamagata Station. The roads were still wet but the skies were beautiful blue.

There are regular trains to Yamadera and it takes less than 20 minutes to reach. We had some time in our hands, so we went around the back of the station to find some lovely Momiji trees.

We caught the 9:45 am local going to Sendai on the JR Sanzen line. The ride from Yamagata to Yamadera is covered by the JR Pass. The Fall experience started early on the train on the train itself, as it chugged alongside some lovely mountains.

Misty mountains along the train ride to Yamadera

We reached Yamadera at around 10 am. The weather had again turned cloudy, but the fall foliage around the Yamadera mountains kept my excitement alive.

After wandering around the base of the mountain for some time, we made our way across the Tachiya River towards Yamadera.

A brief history of Yamadera

It was during the early Heian Period (794-1185) when Emperor Seiwa sent Monk Ennin to the Tohoku Region. The monk, who is better known in Japan by his posthumous name, Jikaku Daishi is credited with founding Yamadera, in the current Yamagata prefecture. In those times this area used to be part of the Dewa province.

Even though in the Japanese Feudal Period (1450-1600) the temples were destroyed by the wars and temporary fell into decline, during the next Edo Period (1615-1868), Yamadera recieved a lot of recognitions by the shogun (military government) and regained its prosperity.

The first temple we visited was the Konpon Chu-do (Hall). The Konpon Chu-do is the Main Hall of the temple and its oldest structure. Made of beech wood, this building is said to be the oldest in the complex.

Konpon Chudo or main hall of Risshaku-ji temple in Yamadera

According to my research prior to visiting the temple, the Konpon Chu-do hall holds an eternal flame that Jigaku Daishi brought from Enryaku-ji. This flame has been burning for more than 1100 years. It will appear silly and let me tell you it was not for lack of effort but I could not to figure out where this flame is placed.

According to legend, the monk Dengyo Daishi (767 – 822), the founder of both the Tendai sect and Enryaku-ji temple in Kyoto brought this flame from a pilgrimage to China in 804 / 805 A.D. to Japan. Interestingly, the original flame at Enryaku-ji was extinguished when Oda Nobunaga destroyed the Enryaku-ji complex in 1571. When Enryaku-ji was rebuilt, the flame was brought back to Kyoto from Yamadera.

In front of Kunpon Chu-do Hall, there is Nadebotoke, a statue representing Buddha. Nadebotoke refers to a Pindola, the highest order of Buddhist acolyte who has attained satori. It is said that if you touch this idol in the same place that you have an injury, and then touch the place where you are injured. Some of the Chinese tourists in front of us just wouldn’t leave. They kept touching the statue like forever. Eventually when they left, we offered prayers at the holy shrine here before beginning our ascent towards the higher reaches.

The wooden Buddha inside Konpon Chudo at Yamadera Temple Grounds

A few paces to the left, you can find the Sammon Gate. Here you can buy the admission tickets to the temple grounds. They cost ¥ 300 per head for adults. It was a Tuesday and there were very few visitors. We gradually made our way up the stairs towards the summit.

Stairs up the Yamadera Mountain

Midway on the trail, you can see some beautifully weathered rock faces on the side of the mountain. There are many other interesting structures on the way but I have discussed about them in my previous journal.

Weathered Rocks on the side of Yamadera

At the end of the stairs, you’ll find Niomon Gate. It was built in 19th century and it’s actually one of the newest building in Yamadera complex.

As we passed the Niomon Gate, we found ourselves in front of a rocky outcropping on which lies the most-photographed wooden structure of Yamadera: the small Sutra Repository Tower known as Nokyodo.

Just beside the Nokyodo you can find the Kaisando or the Founder’s Hall. Kasaido Hall is dedicated to the founder of the temples, Jikaku Daishi (monk Ennin) while the Nokyodo Hall was used as a room where sutra were copied.

The stairs going up on the right take you to Godaido Hall, an observatory deck, built in the early 1700. This hall is placed in such a way it provides glorious views on the valley.

At some point in time, the word momiji became synonymous with the maple tree (kaede) and now people just use it to refer to the maple trees.

Maple trees are native to Japan and can be seen in their wild form in forests. I used my 80-400mm to get a few close-up shots of the mountain tops.

After capturing several shots of the mountain range, we climbed down the stairs back to the Kaisando. From here a narrow path leads up the mountain. Along the path are two Momiji trees perfectly placed to capture the most beautiful structure of Yamadera.

The most beautiful shot of Nokyodo at Tamadera during Fall

Even though the red leaves are more popular, I love the yellow Momiji leaves. Even in the dull weather, they were shining with joy. The species of maple generally determines the color the leaves will change to – red, yellow or brown. Although the word koyo literally means “red leaves, ” it is used to refer to all the colors of autumn leaves. The word oyo refers to yellow leaves, and the word katsuyo refers to brown leaves specifically.

Maple leaves are sometimes eaten as tempura. Fresh leaves are salted or sugared and then fried in tempura batter, for a delicious treat.

Took some photos with the Momiji Trees

During the Kamakura Period (1185-1382), Yamadera became the center of the Tohoku’s Buddhist culture. During those times over 300 monks along with thousands of devouts lived in the upper and lower part of the mountain.

A small path goes to Okunoin hall, where Daibutsuden is located. Inside, a Buddha Amida statue is in place, and visitors can admire it from outside the building. Photography is prohibited in this area.

Okunoin of Risshaku-ji temple in Yamadera

View of the mountains from the top

The Fall viewpoint from Yamadera Temple

On the left, you can find a small building almost hidden from view.

RokuKannon housed on the edge of Yamadera Mountain

The artificial lights had started to take effect along the mountain side.

Illuminated weathered rocks on the side of Yamadera

In the failing light we made our way to the base of the mountain where the Risshaku-ji sat in the dusk.

Lights were turned on while we waited at the Yamadera Station fror our train.

Thanks for reading. Photographs can never tell the emotions I felt standing on the cliffs edge at Godaido as I witnessed the beautiful fall trees of Yamadera. But I hope they can inspire some of you to reach out and witness what I have. If you have the chance to tour Yamagata, do not miss this unique experience.

I look forward to your reviews and questions. If you are looking to explore more of the Tohoku region, follow my story as I move further north to the beautiful city of Aomori.

Can I carry my luggage to the Temple?

Yes, Coin lockers are available at Yamadera Station where you can store your belongings for the time you are here.

What are the visiting hours?

April to November: 9.30am to 4pm
December to March: 10am to 3pm
Closed on Wednesdays

What is the best time to view fall foliage in Yamadera?

From the end of October to the beginning of November 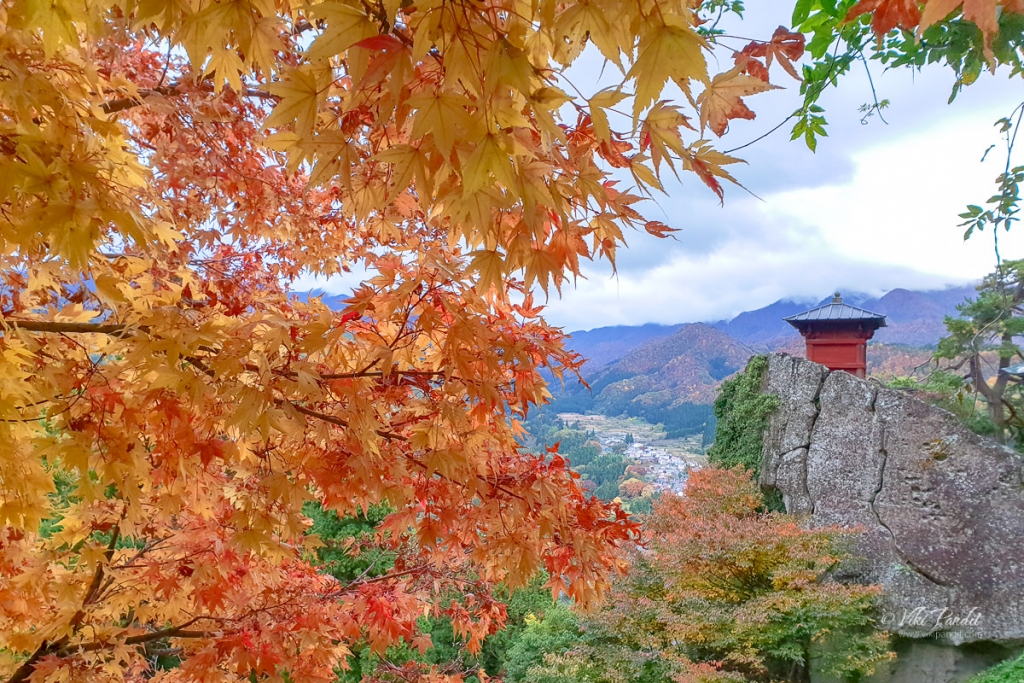 Places to see near Yamagata