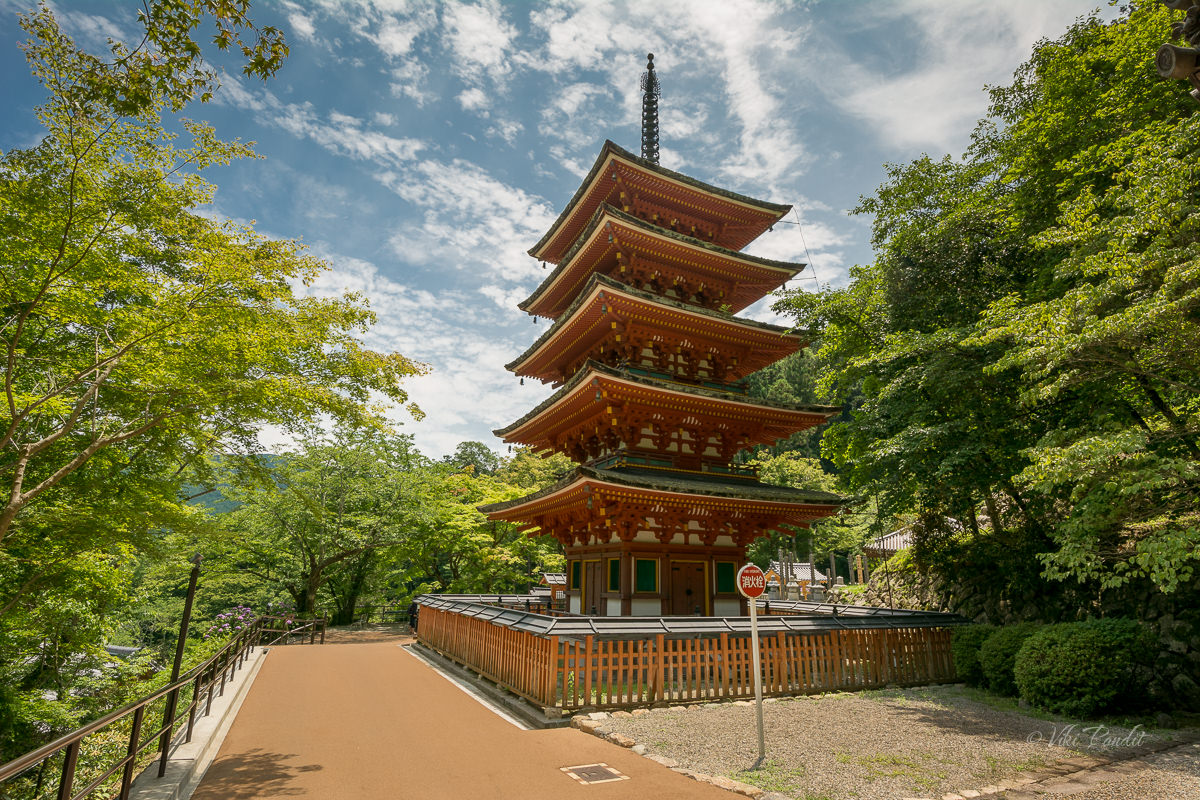 On a lovely sunny day, Mani & I left for Hase-dera Temple in Nara. It had been raining incessantly for the whole week and we were lucky to have caught a break over the weekend.

Hase-dera is not very far away from Nara but we had to change a couple of trains to reach the Hasedera Station. From Kintetsu Nara Station we took the train to Yamato-Saidaiji Station, then from there, another to Yamatoyagi. At Yamatoyagi we changed to a semi-express train for Hasedera.

On the train Mani explained to me how the original Hasedera was founded in 686 A.D. when a Buddhist priest named Domyo enshrined a bronze plaque carved with a three-storied pagoda and two sitting Buddhas. The bronze plaque, known as Douban Hokke Sessou Zu, is today listed as a National Treasure of Japan. Later, in the year 727, the temple was expanded by order of Emperor Shōmu and a statue of the eleven-faced Kannon was placed near the original temple that enshrined the bronze plaque. The temple has burned down and rebuilt several times over the years.

It didn’t take us long to reach Hase-dera Station. It’s a small building surrounded by lush green mountains. Only a handful of Japanese got down alongside us.

From the station it takes about 20 minute walk to reach the temple grounds. The streets are narrow and steep. It’s a quite neighborhood and it felt very peaceful walking through old rural city of Sakurai. One can also take a short-cut using stairways but we preferred to walk down the road, passing by old-fashioned wooden houses that will make you feel like walking in medieval Japan.

The road led us down into the Hase valley and across a bridge over the Hase River. Information boards are conveniently placed along the way to guide visitors towards the temple.

Up the hill to Hasedera Temple

As we walked towards the temple, we came across a small red bridge on the right continuing towards a dense forested area. The vermilion gate meant there was a shrine up there but we decided not to go up that path.

Bridge leading to a Shinto shrine in the forest

As we neared the temple, we started to see some more people. Soon, we were at a crossroad. On the left there is a fleet of steps leading up to the temple gate. At the base is a small temple building known as Souketsuke. Just opposite was a road where the wooden houses have been converted into tiny shops and restaurants. Mani picked up a green kusamochi (sweet rice balls) from one of the roadside Mochi stores. Further down the road one can find many traditional restaurants. It was lunch time so we also picked up a Kakinoha Sushi box and headed towards the temple.

It was hot and we were sweating profusely from the walk. Once we reached the base of the stairs, we decided to take a break at the Souketsuke. It serves as sort of resting place for visitors. Couple of benches are placed inside the building along with some vending machines serving fizzy drinks.  I grabbed a drink while Mani feasted on the sushi.

A deity named Akiba Gongen is enshrined at the Souketsuke, a god protecting against fires

A deity named Akiba Gongen is enshrined at the Souketsuke, a god protecting against fires.

After lunch, we made our way towards the Niomon Gate. Unfortunately the gate that was covered up for repairs. Maybe because of the repairs, the entry to the temple was free for the day. Past the Niomon Gate, we took a diversion to the left. The temple grounds were laden with Ajisai. The hydrangeas in baby blue. pink and purple greeted us into the grounds.

Hasedera is also known as the Temple of flower. There is almost no moment of year that the temple stands alone without colorful blossoms of cherry, Chinese peony and hydrangea.

The gardens were laden with hundreds… no, thousands of hydrangeas in different colors. We walked past the lovely flowers checking out closely the different petals of each.

Ajisai along the path to Hasedera Temple

I was also surprised by the red maple trees in Summer. Generally they only turn red during Fall.

Some maple leaves are always red even in Summer

After spending some lovely time with the hydrangeas, we strolled up the path towards the Main Hall of Hasedera.

The Main Hall is, as the name suggests, the heart of the temple. It houses the Eleven-Faced Kannon, an image depicting Kannon, the Goddess of Mercy and her 11 faces. The original statue of Hase Kannon is said to have been carved out of a camphor tree in the year 727 by a priest named Tokudo Shonin. Tokudo Shonin was a fervent worshiper of Kannon, the Goddess of Mercy, and he started the pilgrimage network of 33 sites in Kansai sacred to Kannon, including one in Nachi.

The current statue was crafted in the year 1538. It is about 10 m high, probably the largest wooden statue in Japan. These faces are made up of one primary face and 10 secondary and are said to allow Kannon to see 360 degrees, in case anyone is in need of her assistance.

Hasedera was founded in 686 A.D. by a Buddhist priest named Domyo

During the Heian period the temple was regularly visited by members of the nobility. It was helped by the fact that it was situated along the route to the Ise Shrine.

Hase-dera flourished as one of the centers of the Shingon Buddhism, particularly after the arrival of priest Sen’yo from Negoro-ji in 1588. Upon his arrival, Hasedera became the main temple of the Buzan sect of Shingon Buddhism, a position it holds to this day.

Photography of Kannon is prohibited, so we just went up the main hall and lighted some incense sticks praying for health and happiness. Beside the public area, some visitors were entering the inner hall and praying at the feet of Kannon. Admission to the inner area requires a fee of ¥1000 yen. We skipped it and walked towards the front where a large veranda outside the Main Hall allows for a spectacular view over the Hase Valley and the surrounding hills.

Beside the main hall there are a few smaller temples with Jizo statues beside them. One can spend hours walking around the temple grounds and will still discover new sights.

Kūkai, also known posthumously as Kōbō-Daishi, 774–835, was a Japanese monk and the founder of the Shingon Buddhism

From the Main Hall we went up the hill towards the Five-Storied Pagoda. It’s not very old and was constructed in as recently as 1954. It has been named Showa Pagoda after the period it was built in.

The Five-Storied Pagoda is not very old, it was erected as recently as 1954

It was early evening. We were a bit dehydrated in the Sun, so we walked back to the station to catch a train back to Nara. The best part of Hase-dera is its gardens. Though the statue of Kannon is something but the lovely gardens will take your breadth away. Try to come during cherry blossoms or like I did during the Ajisai blooms. I have heard it is also great during fall when the maple leaves turn red all across the garden.

Thank you for reading, I’m excited to hear your comments!

New Year’s Eve: The most celebrated event at Hase-dera is during New Year’s Eve. In a ceremony called Kannon Mandoe, the entire staircase corridor is lit up with thousands of lanterns. This continues for evenings of January 1st, 2nd and 3rd.

Sakura Season: From late March to early April, the cherry trees of the temple blossom, providing an exquisite scenery.

Chinese Peony Season: From mid-April to early May, the 7,000 Chinese peonies planted alongside the Stairway Corridor are in bloom. 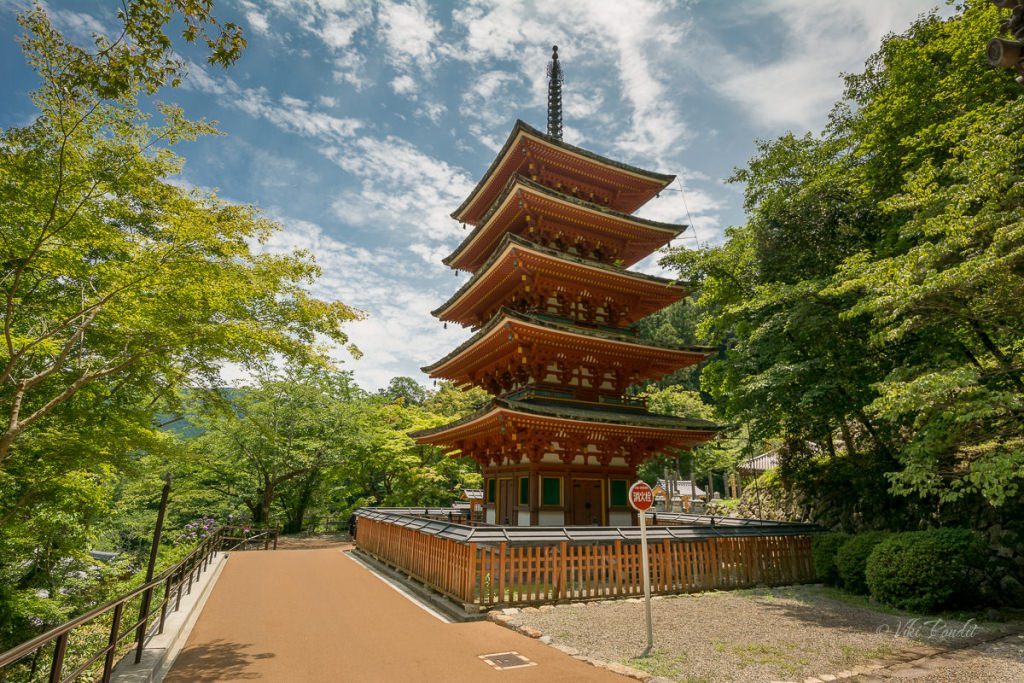 Places to see near Sakurai-shi