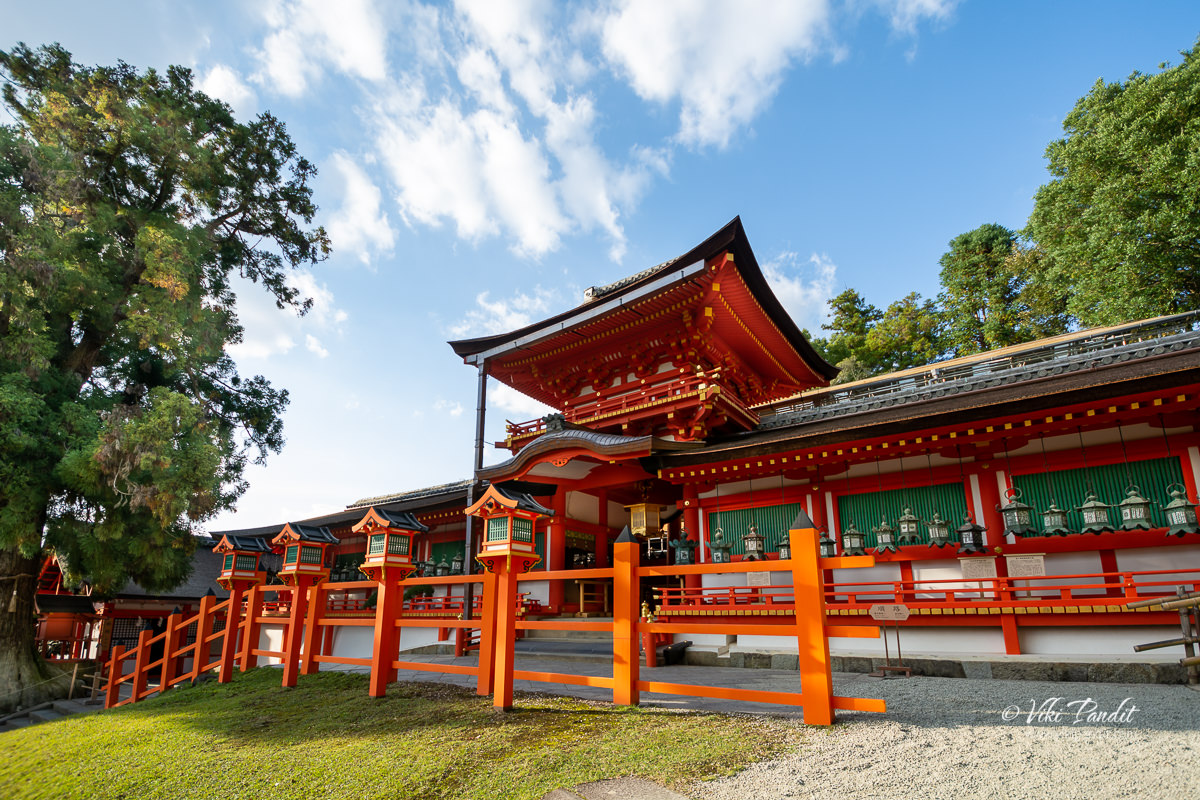 The sun was shining again and I didn’t want to miss out on an opportunity to explore Kasuga Taisha. We had missed going inside the shrine on the day we went for a walk in the Nara Deer Park and it looked like a lovely day to fix it.

Kasuga Taisha was built in 768 CE by Lord Fujiwara, by the order of Emperor Shotoku. It enshrines four gods from important shrines around the country. From the 8th century, as the Fujiwara dynasty grew in clout, the Kasuga shrine also prospered. Kasuga Taisha became so powerful that even Emperors came to worship here. During that time, the Fujiwara clan wielded such huge amount of political influence that some emperors even married daughters from this clan.

I had stashed up a handful of acorns the day before when I was at Toshodaiji. As I walked past the Deer park, herds came running towards me with needy smiles. After feeding them, I sat in the park for a few minutes with my camera bag doubling up as a back pillow.

The deer gleefully loitered in the verdant greens, munching on the soft grass. It was funny sometimes as they would head-butt the visitors with senbei in their hands and chase them around the park.

The males would keep an eye on the females and if anyone wandered too far they would run after them screeching at them to rejoin the herd.

After an hour of lazying in the soft sun, I started towards the Kasuga Taisha shrine. The road to the shrine goes through a truly primordial forest. The wide gravel path is lined on both sides with hundreds of moss-covered stone lanterns. These lanterns numbering around 2000, are lit during Lantern Festivals in early February and mid August, which must be an awe-inspiring sight.

At the gate, a pair of Shishi, lion-dogs stood guard. The lion-dogs also called Koma-inu, traditionally stand guard outside the gates of most Japanese Shinto shrines. In contrast, the Buddhist temples are typically guarded by the Nio Protectors. As guardians outside the shrine gate, one Shishi is depicted with its mouth open, to scare off demons, and the other with its mouth closed, to shelter the good spirits.

A few minutes up the path is the main entrance. The whole shrine is painted in bright red with green accents. I stood near the entrance to get a clean shot without people, but they just kept streaming in. The priestesses were dressed in lovely red & white Kimono. Near the shops, you can find some ema wood planks hanging with prayers from the visitors.

Near the gate the fortune-telling stalls were doing good business. The outer area is free, but to enter the shrine, one has to pay an admission fee. After waiting for some time, once the crowd thinned out, I went to the admission booth. The ticket cost me ¥500. Inside the path is marked with arrows for tourists.

While outside all lanterns are made from stone, the ones inside are cast in bronze. Some of them are covered with gold leaf. The architecture of the Shrine is known as the “Kasuga style” due to the unique shape of its roof.

According to Japanese Shinto rituals, shrines were generally destroyed and rebuilt every 20 years for purification. So, technically the current structure as of today is the 57th Kasuga Shrine, an exact reconstruction based on the original layout.

The first hall I walked into was the prayer room or Kyojyo. A priest was reciting Sutras. Shinto worship is highly ritualized, and follows strict conventions of protocol, order and control.

Past the prayer room, I reached a corridor lined with many bronze lanterns.

At the far end of the corridor was a closed room. The room was dark and dimly lit by the lanterns. It was an un-earthly experience inside the room. I had to really crank up the ISO to take this shot.

I circled back towards the front area. There I found many more golden lanterns hanging in a neat row.

To the left of the front building was another path. I followed it towards the back of the shrine.

There are a couple of smaller shrines towards the back, surrounded by thick green grove. I walked around taking some pictures.

It was evening and time for me to head back to the university cafeteria for an early dinner.

Lord Fujiwara, by the order of Emperor Shotoku