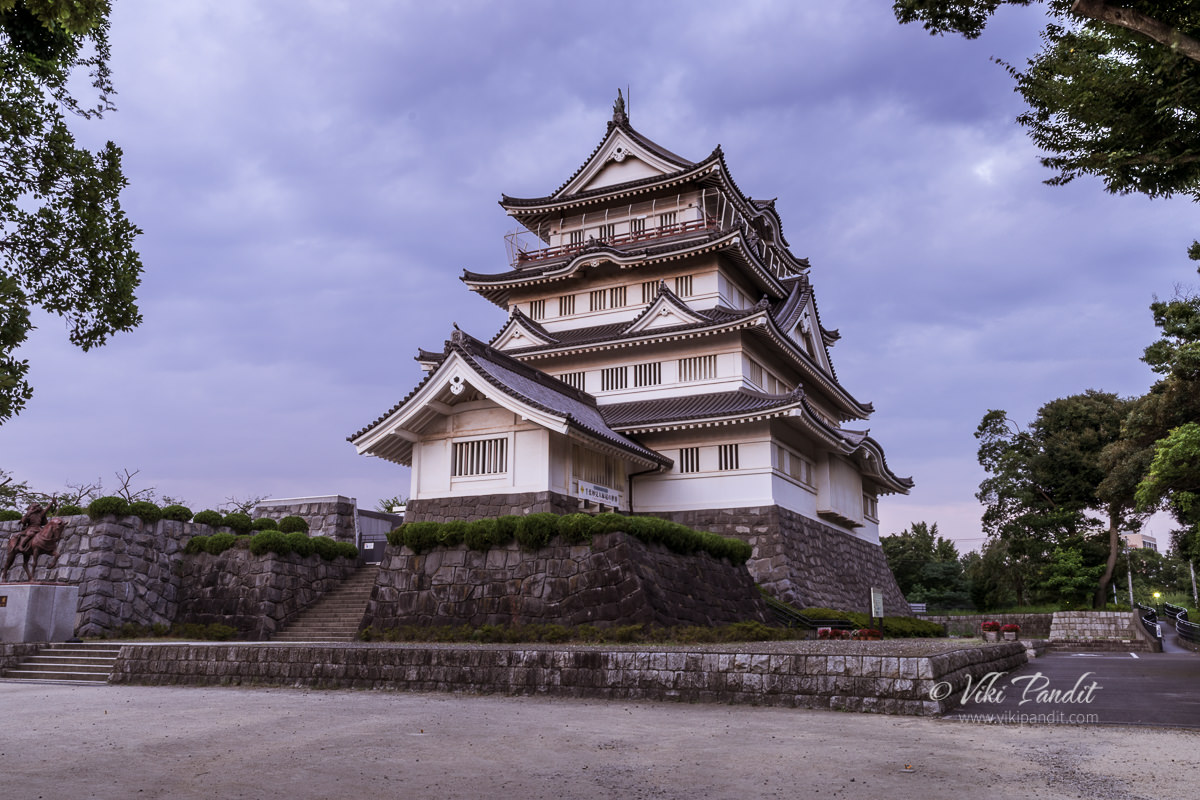 The Chiba Castle was not on my bucket list, but while we were in the Kanto region, we decided to give it a visit.

From the interesting Saitama Rail Museum, we took the JR train to Chiba Station. From Chiba Station, we took the Chiba Urban Monorail, a two-line suspended monorail system. It is the world’s longest suspended monorail system travelling along a 15 km route. This dual-tracked system was built by the Mitsubishi Company, to connect the suburbs of Chiba Prefecture with main city.

It was fun watching the cars go by below our feet as the Chibatoshi-Monorail passed through the heart of the city. The ride is short, all of 6 minutes and costs ¥‎200. The monorail dropped us off at Kencho Mae station from where the Chiba castle is just a 10 minute walk. It was a cloudy evening as we walked towards the park.

The directions are easy to follow and we at the Inohana Park in no time. A wide paved stone path leads to the castle grounds.

A series of steps carried us up to the castle. The park was deserted, we were the only ones around. A vending machine was sitting in a corner surrounded by trees. As we faced the castle, it appeared fairly well maintained.

The white castle was built by Chiba Tsuneshige around 1125 CE. Tsuneshige and his descendants ruled over the domain from this castle until the 1400’s. In front of the castle, on the left lies a bronze statue of the castle’s founder, Tsuneshige Chiba, on a horse.

In 1455, Makuwari Yasutane, a related member of the Chiba clan, attacked the castle and took control of Chiba. He built a new castle (Motosakura Castle) nearby, abandoning the Chiba Castle and leaving to ruin for hundreds of years.

When the Satomi clan moved to southern Chiba Prefecture in the mid-15th century, they too ignored the Chiba castle and ruled from a newly created Otaki Castle created in 1521 by Nobukiyo Mariyatsu. Over the years as the control of the land passed from the Satomi to the Tokugawa shogunate and subsequently to the Abe, Aoyama, and Inagaki clans before being handed to Matsudaira Masahisa, whose descendants continued to rule from Otaki Castle until the Meiji restoration period.

It was only in 1672, when an application was made to the Tokugawa shogunate for permission to rebuild the Chiba castle. By that time, the castle had undergone severe devastation. It didn’t have a single functional gate and the 4-story donjon had fallen into ruins.  The castle was rebuilt in the 16th century. However the reconstructed donjon again burned down in 1842. The current castle we see today is actually a reconstruction from 1967. A new donjon was added in 1975. Even though it looks picturesque, this reconstruction is not in keeping with the original castle design.

Due to lack of any surviving records indicating the appearance of the original donjon, the current structure was modeled after a 1832 sketch. However for a castle built in the 1100’s there should not be such a magnificent keep. Keeps came into prominence much later.

The castle houses the Chiba City Folk Museum. There are five floors inside exhibiting personal effects relating to the Chiba Clan. Many artifacts like swords, guns, and other samurai weapons or on display here. The museum also talks about Chiba’s history and includes photos comparing it from the early 1900s until now.

Chiba Castle is very easy to reach and can be visited for a quick couple of hours tour. If you just want to see a castle, this would be an easy trip, but if you are deep into historical things like me, you might not enjoy it so much. Not many people visit this castle and that makes it a quite and peaceful place to spend some time.

It was dusk and we started on our way back to Takasaki, stopping for a brief moment at Tokyo.

Places to see near Chiba