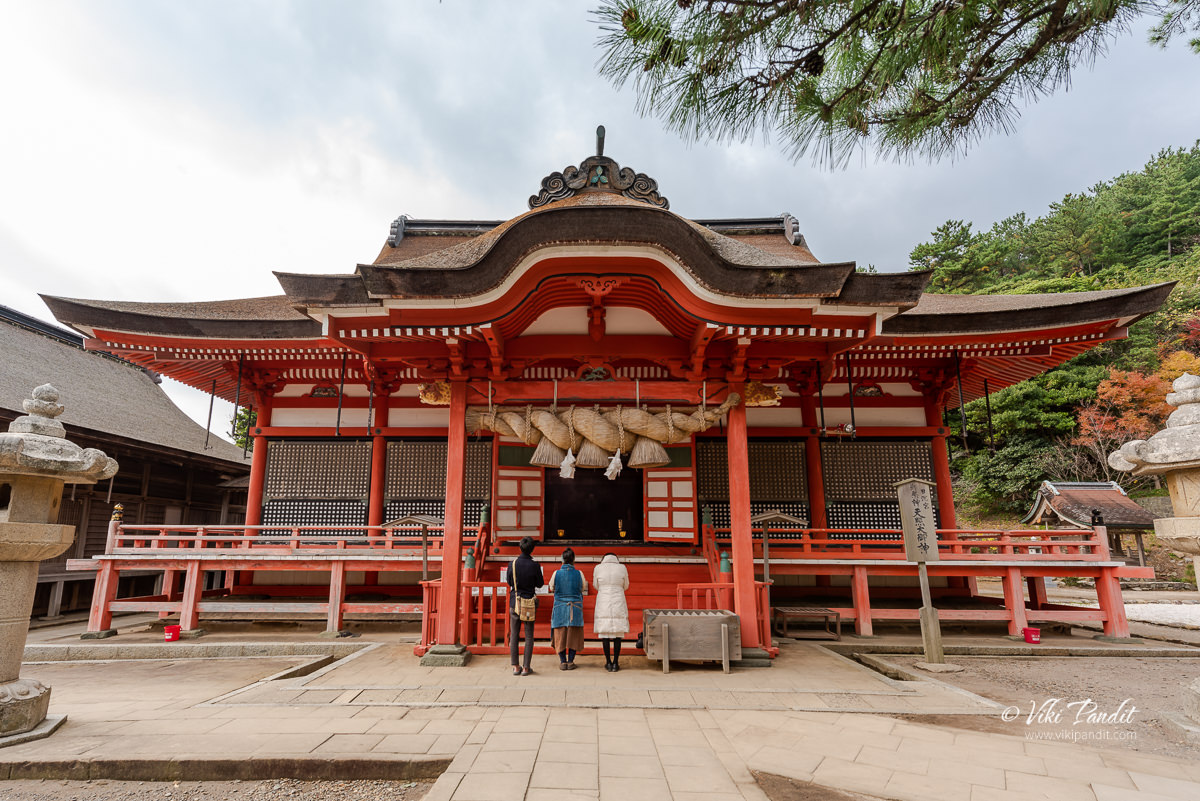 After spending a beautiful breezy morning at the Hinomisaki lighthouse, we walked down to the Hinomisaki Shrine, which is just about 15 minutes away. It was pretty easy following the markers leading towards the shrine.

Hinomisaki Shrine was built in honor of two deities with a prominent presence in Japanese mythology: Amaterasu, the goddess of the Sun, and Susano, the god of storms and the sea. The temple is believed to bring luck in business & travelling.

The weather had greatly improved and the dark grey clouds had scattered away. At the entrance of the shrine grounds a white stone Torii welcomed us into the temple grounds.

As you pass the Torii, you can find a large embossed carving on the side of the path. It depicts the Me-kari shinji, a religious rite of seaweed (wakame) harvesting. Izumo Province is delimited by the mountains of Chūgoku in the south and the Shimane peninsula in the north. In the lowland areas of the central plains, the large-scale opening up of rice-farming land was moving forward in conjunction with the reclamation of lakes and marshes. The mekari rite is performed on the fifth day of the first month of the lunar calendar at Hinomisaki Shrine.

Local fishermen offer their harvests, other than wakame, which are presented to the gods with other food offerings. Wakame can be harvested only after this rite is completed.

As you keep walking along the cemented path, you will reach the vermilion colored Nishen-gu gate. It looks like most shrine entrance gates but its style is based on based on Gongen-zukuri, a traditional shrine architectural style.

Follow it by pouring some water on your cupped hands, then rinse out your mouth with the water in your hands and spit it out beside the fountain. Finally hold the ladle upside down over the ground to let the remaining water trickle down rinsing out the handle.

The purification part is only optional and you can choose not to undergo it if you feel. Once you walk into the main temple premises, you will see two smaller shrines near the gate on either shrines. I am not sure to whom those were dedicated to.

What Shimane prefecture lacks in size and population, it makes up for in scenery and ancient mythology. Izumo-taisha, in the middle of the prefecture, is said to be Japan’s oldest Shinto shrine, where stories that delve into the creation of the Japanese archipelago have been passed down over centuries.

Encircled by a grove of old pine trees, the vermilion-lacquered Hinomisaki is an ancient Shinto shrine standing on Cape Hino. Though not as popular as Izumo-Taisha, its name is recorded as the “Misa Gisha” in the ancient text of the “Izumo no Kuni Fudoki.” Hinomisaki Shrine is in fact the collective term for two shrines—the Hishizumi no Miya, dedicated to the goddess Amaterasu-omikami and the Kami no Miya, dedicated to the god Susano-no-mikoto.

Izumo Fudoki was a collection of books created as a result of Imperial edict in 713 CE, ordering each province to gather detailed information of its region.

A grandchild of Shogun Tokugawa Ieyasu, Matsudaira Naomasa is remembered for his valor in the Battle of Osaka (1615) at the young age of 14. The empowerment of Naomasa as the lord of the Matsue domain marked the start of the longest reign a single-family held at Matsue Castle, spanning 10 generations (1638-1871).

In years when he was resident in Izumo, he would frequently tour the province under the pretext of visiting the grand shrine of Izumo Taisha and Hinomisaki Shrine, practicing falconry, and making forays into the innermost reaches of Izumo. On such occasions, he would often stay with wealthy local farmers, using their private residences as a headquarters for his own retinue.

Hishizunomiya - where the Amaterasu Omikami is enshrined

As I mentioned before, Hinomisaki Shrine was built in honor of two deities with a prominent presence in Japanese mythology: Amaterasu, the goddess of the sun, and Susanoo, the god of storms and the sea. The Hishizumi no Miya hall is dedicated to the Sun Goddess Amaterasu, considered Shinto’s most important kami.

Initially, Amaterasu Omikami was enshrined on the Kyojima Island (Fumishima) just off the coast of Kiyoenohama, about 200 meters from this place.

At the time Hinomisaki Shrine was built, the area was a prosperous seaport, and the local lord commissioned the shrine to stand guard over the coast and protect the area’s trade. The vermilion-lacquered shrine pavilions were based on Gongen-zukuri, a traditional shrine architectural style. Being a valuable architectural work of the early Edo Period, the shrine is designated as a nationally important cultural property.

Gongen-zukuri is the name of a complex Shinto shrine structure in which the haiden, or worship hall, and the honden, or main sanctuary, are interconnected under the same roof in the shape of an H.

The shrines with white walls and wooden cuts, and the pillars and cross-cuts painted in red are the Gongen structure that both the upper shrine and the main shrine are connected to, leaving the glamorous image of the Momoyama period.

On the roof of the shrine, the symbols of the three gods “Souboutsuson”, “Amaterasu Omikami” and “Tsukiyomison” are engraved. The engraving in the center which consists of three circles, may look like simple geometric shapes, but actually they represent the sun goddess Amaterasu, the moon god Tsukuyomi, and the sea god Susano.

You can also find a depiction of the “Three Wise Monkeys,” which originated in Japan and have become a familiar motif in cultures the world over.

The Kami no Miya hall is dedicated to Susano-no-mikoto. The grains of sand from within the grounds of Hinomisaki-jinja are much in demand for Land Breaking ceremonies. For a very long time, the sand is thought to have protective properties so is a very popular charm among worshipers.

Because the shrine was intentionally built to face the west in the direction of the setting sun, Hinomisaki Shrine has been seen as the guardian of the night once the day sets in Japan.

Every August 7th, a special shrine sunset festival is held. The festival is open to all visitors.

This is a much more compact shrine than Izumo Taisha Grand Shrine, with a different atmosphere. It is designated as an important cultural property of the country as a valuable shrine structure including all structures inside the complex including stone structures. It is well worth visiting both.

Thanks for reading! Leave me a comment if you liked my journal or follow my story as I hurry towards Izumo Taisha to capture the most revered of all shrines in Japan

What are the shrine visiting hours?

The current shrine was started by Tadaka Kyogoku, who was the lord of the Matsue domain at the time, in 1634 CE, but it was completed by Naomasa Matsudaira in 1644 CE.

How to reach Hinomisaki Shrine?

Get off at the end of the bus bound for Hinomisaki from JR Izumo Station. 1 minute walk from the bus stop.

Places to see near Hinomisaki Shrine