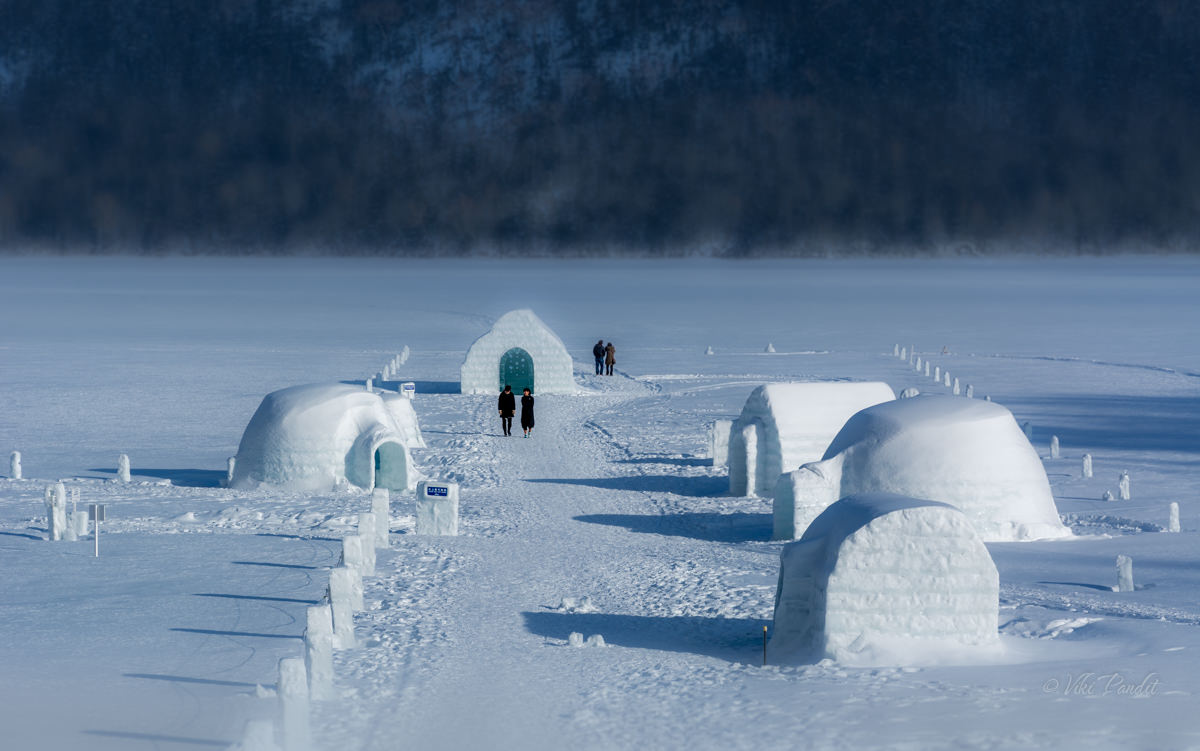 Our first day in the beautiful island of Hokkaido. I was excited and looking forward to spending my next week surrounded by snow. Coming from a land where temperatures frequently touch 50° Centigrade, it is like a fantasy coming to Hokkaido in winter.

It was going to be a long day. We were heading to the city of Kushiro, almost 300 km away. On the way, we had planned to take a break at Obihiro, and visit the phantom village on Lake Shikaribetsu.

Phantom?? because nobody actually lives in that village. Shikaribetsuko Kotan (然別湖コタン) is a winter event held from late January to late March at Lake Shikaribetsu, located in the northwestern part of Obihiro. When the lake freezes in winter, the people from the nearby village build igloos on the lake using ice. The kotan (village) exists only during the winter months and melts away with the onset of spring.

We had already purchased our special JR passes the day before, that were valid for unlimited travel in Hokkaido for the next 7 consecutive days. This 7 day JR Pass costs ¥26000 and can be bought at the JR ticket counter at Chitose Airport itself.

We left the warm comforts of our hotel at 7 am and walked down to the Nakajimakoen park. In daylight, the park looked lovely, covered in snow. The snow had tapered down from last night and it was relatively easier to walk. Curiously, even though I was surrounded by snow almost 3 ft high, it didn’t feel very cold.

Inside the park, an underground passage directly goes up to the Nakajimakoen Station. From there its just a couple of stops to Sapporo Station.

At the station, we had a light breakfast. Sapporo Station is huge. There are dedicated rows of shops for clothes, food and other stuffs. We caught the 8.45 am Super Ozora train to Obihiro. For the next 2 hours, I was treated to some breathtaking scenery as the train chugged along the white landscape. I have never seen so much snow in my life. It was like the color green had been banished from the lands.

We reached Obihiro at 10.40 am. At the station, we went directly to the tourist information center to obtain local bus schedules for Lake Shikaribetsu. The easiest and the cheapest way to reach Lake Shikaribetsu is using the Fusui bus. The lady at the help desk informed us, one was leaving within 15 minutes at 11 o’clock. We literally ran to the bus stand since the bus intervals were far apart and it takes almost 3 hours to reach the lake. The bus was about half full and mostly filled with locals. It was a pleasant surprise for us when the driver told us that the ride to Lake Shikaribetsu was absolutely free for tourists going all the way to the Lake. However please note there are only 4 runs a day for the free bus.

As we drove across the city, it was clear that it had been snowing heavily for some time. The sidewalks were covered in huge mounds of snow. The roads had been swept of ice but they were still wet and cold steam was rising from the surface. The bus stopped at a few local stops before we left behind the little town of Shikaoi at the foot of the mountain and entered the forested area of Daisetsu National Park.

Driving through the Diesetsu National Park

The history of the phantom village of Lake Shikaribetsu goes back to 1980, when local residents began building igloos on top of the frozen lake for fun near the Shikaribetsu Kohan Onsen resort. They continued this yearly activity and as the news spread, people from all over Japan began coming to see the ice village during winter.

We reached the lake at 1.45 pm. Though the distance from Obihiro is a bit above 60 km, the driver took his time as the bus goes through many elevated sharp curves and snow-covered roads.

Even in this tough terrain, it feels great to see the buses and trains are so particular with time. One can plan everything from before and trust these guys to do their job.

The bus dropped us off in front of Hotel Fusui. If you are coming on the same bus, do not forget to to collect the free return ride ticket at the reception of the hotel.

Hotel Fusui is a long-established hot spring hotel on the shore of the Lake Shikaribetsu. It was founded in 1954

Hotel Fusui is located right on the edge of Lake Shikaribetsu. We obtained our return tickets and left our luggage at the reception. We were hungry so we went into the restaurant on the ground floor. The restaurant seating is cleverly arranged so the guests can eat with the lovely view of the lake. We ordered a local delicacy – the Dolly Varden trout, that are found in the Lake Shikaribetsu.

The restaurant overlooking the stunning lake at Hotel Fusui

It was quite pleasant sitting by the window in the soft sun, overlooking the huge, frozen lake. From time to time, clouds would pass by casting a shadow over the lake.

Beside the restaurant there is a souvenir shop selling local made wooden artifacts and souvenirs. I made a mental note to come back before catching the bus back to Obihiro.

After lunch we walked over to the lake. The place was very serene and peaceful. Far away, on the slopes of Mt. Higashi-Nupukaushi-Nupur, the spruce forests were draped in snow. In Ainu language, the name of the lake means “Lake of the Sky.” At At 810 meters, Shikaribetsu has the distinction of being the highest altitude lake in Hokkaido.

The construction of the ice village begins every year in early January, when the ice above the lake reaches a thickness of about 15 centimeters. Local villagers and volunteers from across Hokkaido assemble and work for about three weeks to create this amazing village.

The construction of these igloos are not amateur by any means. One can also stay overnight in these igloos if they choose to, although the temperatures can get as low as minus 20 or 30 degrees centigrades at night.. Apart from the scattered igloos, the village also features an ice cafe/bar, an open-air bath, and even a chapel – made entirely of ice.

The village looked very picturesque from the Hotel. As we walked down to the village, the first ice structure we came across was the ice bar. We didn’t bother to go inside as neither of us was thirsty for a drink.

Once in the village, we spent some time admiring the igloos in this remote Hokkaido village. I kind of took a liking to this one 🙂

The bigger ones can be used as a night stay if you desire so.

The bigger igloos had seating arrangements made from blocks of ice. The space was good enough for a small group of 5-6 people.

Feeling frosty inside the Igloo at Lake Shikaribetsu

On the north-east side of the village, one can find an open air hot spring. The hot tub is installed in the water during spring. Once the lake freezes, the tub is no more visible and with the surrounding snow and ice, it appears as though visitors are bathing in ice. What more can one ask for while bathing in warm spring water, surrounded by snow, mountains, and fresh air.

At the far end of the village there is an ice Chapel. The chapel looked like just another igloo from outside. But the inside was beautifully designed. It must take great effort to build something so spectacular just out of ice.

While the design of the intricately detailed chapel changes each year, the results are always no less than spectacular. Many real ceremonies are also held here each year at the chapel.

Inside the Chapel at Igloo Village over Lake Shikaribetsu

After coming out of the Chapel, we explored a few more igloos. The weather had somewhat become gray by this time.

Mani took a liking to this igloo. Created with ice, the igloos didn’t feel as cold as I had thought they would.

Mani inside the Igloo at Lake Shikaribetsu

After investigating the village we wandered off to the far right where a gentleman was offering snowmobile rides. Those looking for a taste of adventure can ride the snowmobile along a pre-designed course over the lake for ¥1000. Neither of us had any experience of handling a snowmobile so the guide drove us across the lake. The guided tour costs ¥2000. In spite of the covered helmets, we could feel the bite of the freezing wind across our face as we rode across the huge lake.

The snowmobile ride on the huge Lake Shikaribetsu feels amazing

After the cross-lake ride, we loitered around as we still had some time before our 4.10 pm ride back to Obihiro. We walked along a makeshift trail in the snow left behind by visitors before us. We probably walked all the way to the center of the lake. Looking back, the hotel seemed pretty far.

The farther we walked, the more I realized, the vastness of the lake. With not a soul around, walking over the frozen lake is very refreshing. At some places we would be almost knee-deep in the snow.

At about 3pm it had begun to snow again over the mountains and we could no longer make out the summit in the heavy snowfall. The snowfall was advancing towards us, fast and within a few minutes the flakes were falling on us. It had started to feel bitterly cold, so we headed back to the refuge of the hotel.

Back at the hotel, we collected our luggage and relaxed on the couch in the lounge. The storm had subsided when the bus arrived at 4 pm. We immediately boarded the bus and were on our way back to Obihiro.

It was almost 6 pm by the time we reach Obihiro Station. We caught the Super Ozora at 7 pm for Kushiro. It was going to be another hour and half on the train. We reached Kushiro at 8.32 pm. The Kushiro Prince hotel was a couple of blocks away and we walked to it. The roads were deserted. People in these parts sure shut down early.

We were tired from all the walking, so we had a quick dinner and went to bed. Thanks for reading. Please leave me a comment if you liked the post. Tomorrow we go on a tour of Akan National Park arranged by Akan bus.

Places to see near Kato District