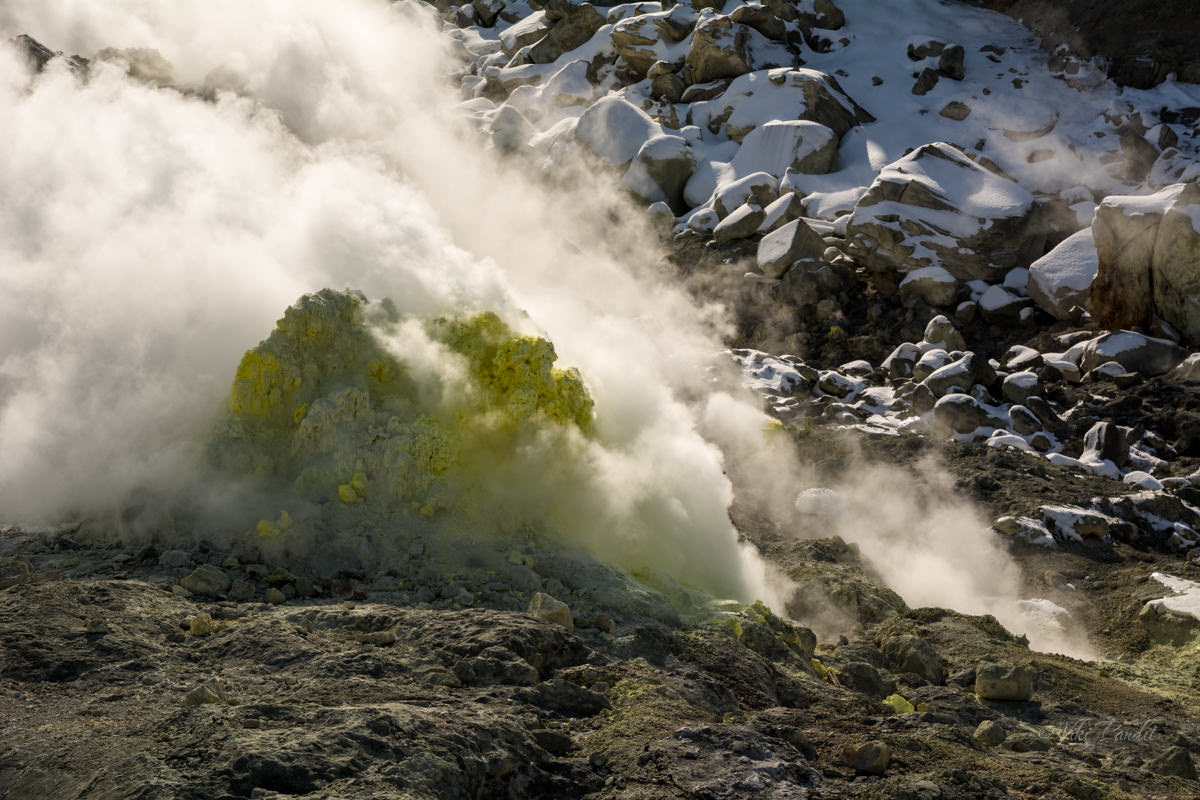 From the lovely lake Kussharo, we drove into the mountains towards Mount Io, also known as Iōzan. Gradually the landscape changed as the forest of Sakhalin Spruce gave way to the rocky surface of Iōzan. Only a few dwarf stone pines and heathberry plants can be seen in the vicinity.

Shitona, our tour guide kept us entertained with legends and mythical folklore of the area. But she only spoke Japanese. These are the times I deeply wish I had learnt a bit of Japanese. I so love to hear stories…

As we got closer it seemed like a thick cloud had engulfed the side of the mountain.

Volcanic gases engulfing the side of Iozan

Japan is full of volcanic islands. Due to high volcanic activity one can find numerous rich hot springs spread all over the country. Iōzan (硫黄山) is one such place.

Iōzan, also known as the “Sulfur Mountain” is an active volcano in the Shiretoko Peninsula. In native Ainu language the Iōzan is called “Atosa Nupuri“, which means “Naked Mountain.” Sulfur was mined on Mt. Io from 1865 to 1867 and again in 1887-88. The 1889 volcanic eruption resulted in a sulfur flow of some 80,000 tons of the mineral. Over the next decade most of the sulfur was taken out thereafter the mining stopped. Its yellow, sulfurous vents can be viewed from close proximity as visitors are allowed to walk around near the steaming area.

As we got down from the White Pirika bus, I could smell the sulfur, drifting in the air. The path up the mountain was covered in snow. We walked carefully towards the steaming vents. As we neared the vents, we could hear water bubbling. As hot volcanic gases escape from these volcanic vents, they cool rapidly, depositing sulfur as fluorescent yellow crystals around the openings.

Although I was a bit scared at first, I walked up to some of the smaller vents. The smell was overpowering near the fuming vents. The strong gases from the vents exerts an enormous influence on the surrounding vegetation. Mt. Kabuto, right next to Iōzan, differs significantly with regard to the vegetation. Standing amidst these steam bellowing vents and yellow crystallize rocks it felt like we were on a different planet altogether.

The sulfur spewing vents near the base of Mt. Io. It feels like stepping onto some extraterrestrial planet | Credits: Ranita Saha

Up towards the summit, there were many bigger vents but for tourist safety a thick rope blocked access to those areas. Mount Io has about 1,500 such vents on its reddish rusty mountain surface. While the composition of the discharge will differ depending on the fissure, water vapor and volcanic gases are constantly being emitted as white smoke. The mountain has been vastly subdued and the last recorded eruption of liquid sulfur happened in 1936.

Sulphur vents near the summit of Mt Io

After some time we walked back to the bus. Near the parking lot, one can find the Iozan Visitor Center, that also offers some refreshments. I have heard they serve eggs cooked by the natural heat of the mountain. It was almost lunchtime and we headed towards Kawayu Onsen station for lunch. Lunch is arranged by the Akan Bus operators, but the cost is not included in the tour package.

After a quick lunch we wandered around the Kawayu Onsen Station

After lunch, we wandered around for a bit. Near the station we discovered a souvenir shop and went inside. In the shop was a big black cat and I chased after him 🙂

We came back to the bus early. Others were still not finished with lunch. We got back to our seats and waited for them to arrive. Within a few minute they slowly trickled in one by one. Once everyone was aboard we were off to Lake Mashu. 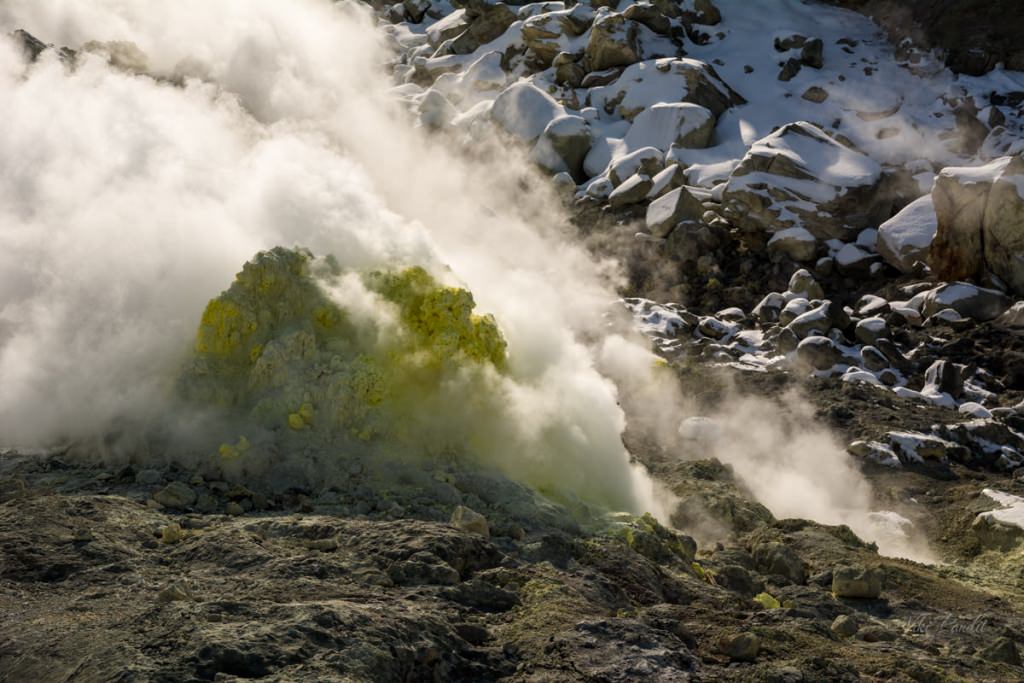 Places to see near Kawakami District