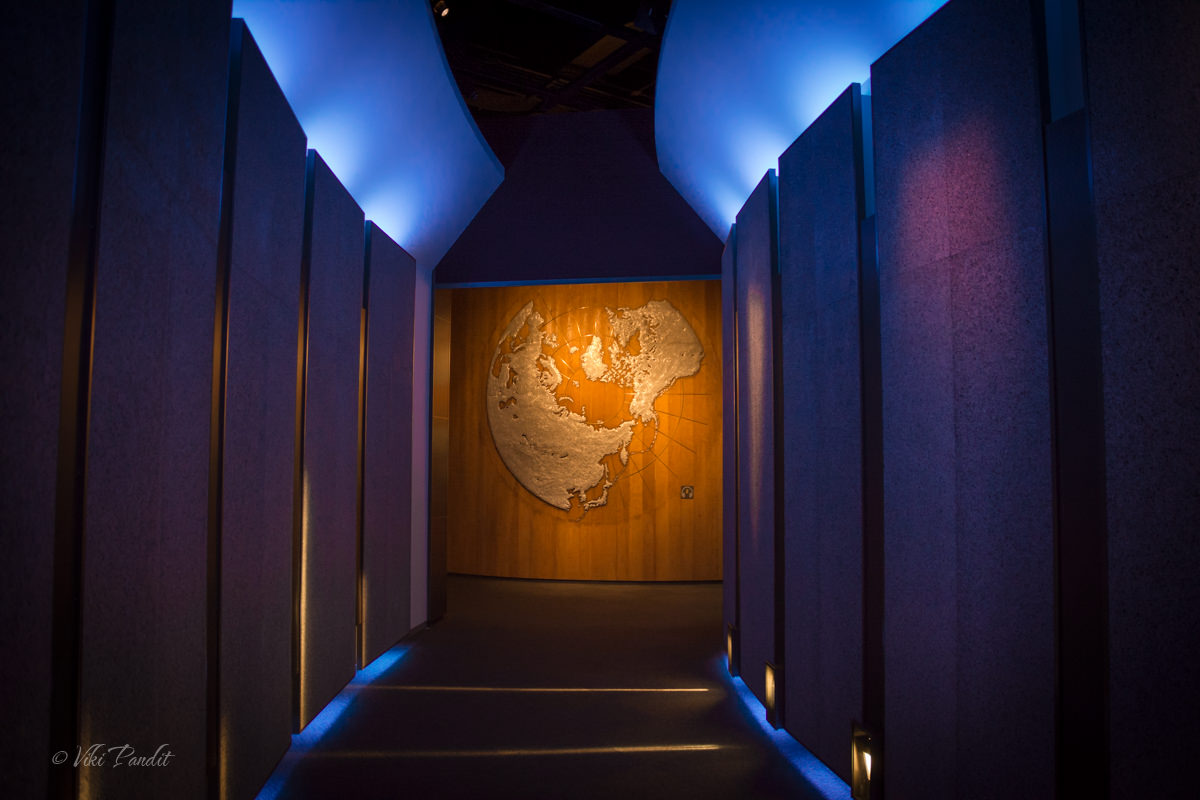 My initial interest in Abashiri was to experience the Drift Ice phenomenon that occurs every winter along the coast. But as I went around northern Japan my curiosity for the Ainu people grew with every trip. My first foray into the world of Ainu took place at Ainu Kotan near Lake Akan. Ainu Kotan is a small Ainu village in Akankohan, lined by souvenir shops specializing in Ainu handicrafts. The beautiful hand crafted souvenirs and their rich history left me yearning for more. So I was very excited to know about the Museum of Northern People in this remote town of Abashiri.

Abashiri is situated on the northeastern coast of Hokkaido, facing the Sea of Okhotsk. Over the years, various historical sites have been discovered here providing evidence to the existence of human civilization since 20,000 years ago.

We had taken the 9.03 am train from Kushiro to Abashiri. We were still using our Hokkaido JR Pass. On the way we passed by the Kawayu Onsen station, where we had lunch, the day before, on our tour of Akan National Park. The unending landscape was covered in snow, with no color except whites covering everything from fields and trees to houses.

In-between, I noticed a few deer in the woods staring at the train with curiosity. About two-thirds of the way, after a station called Shari, the train line went parallel to the Sea of Okhotsk and we saw some drift ice floating by in the ocean.

We reached Abashiri at 11.58 am. We were lodged at the Hotel Route-Inn, just opposite to the JR station. The sidewalks were covered in slippery ice and we had to walk very carefully across the road to get to the hotel. Since we still had some time for our check-in, we left our luggage at the lobby and head out to the Museum of Northern Peoples.

The Museum of Northern Peoples in Abashiri is one of the best places to find detailed information about the cultures of the northern hemisphere. The museum provides a stunning display of clothing, carvings, totems and tools for hunting and fishing. But what interests me most is the mystery surrounding this ancient culture that continues to be debated to this day.

Physically, the Ainu are much different from the average Japanese. They typically have a longer skull, heavy facial hair, and prominent Caucasian features. Their hair tends to be thick and wavy, and body hair is also more plentiful and pronounced. Aside from the physical differences, the Ainu language is also quite unique, showing no relation to Japanese or any other Asian language. The Ainu had no writing system but memorized their history and legends in never-ending epic chant known as the Yukara.

We walked down to the nearest bus stop. Buses are scheduled at regular intervals and we didn’t have to wait long for one to arrive. The ride to the museum costs 400 yen per person. We passed a couple of other interesting places along the way – the Abashiri Prison and the Ice Museum, but we were short on time and went directly to the Northern Peoples Museum.

The bus dropped us off in front of the museum. The area was a bit deserted and covered in snow, about 3 feet high.

The museum opened on February 10, 1991 with the purpose of introducing the cultures of northern people who inhabit the extreme northern regions of the world. The entrance to the building is designed like a conical glass, similar to the traditional houses of the people in the northern regions.

The admission tickets cost ¥ 550 per person. Along with a free booklet, they also provided us with an audio headset that would explain to us in English what each exhibit was. Each exhibit was marked by a number and all we had to do was to select the same numbered video in the app.

The Museum of Northern Peoples introduces the culture and traditional of everyday life of the peoples inhabiting the northern, sub-arctic regions of the globe, including the Ainu, the Sami, the Inuit and the aborigines of Canada and Siberia. Although the museum tries to illustrate the differences and similarities between these different northern cultures, it focuses primarily on the Ainu way of life and one can learn a lot about the skills, tools and culture of the Ainu People.

The entrance to the exhibit hall is dimmed to create a mystical atmosphere. A wooden face from Ainu culture welcomes the visitors to the hall.

The first thing you see as you enter the exhibit hall is this globe showing the arctic region.

Although the Museum touches on the history of various northern cultures, in this article I am going to stick to the timeline of just the Ainu people.

Even before the Ainu came along, the Japanese island of Hokkaido was inhabited by people who used to survive by fishing, hunting and gathering. This period is referred to as Epi-Jomon or Satsumon. The Satsumon culture began around the 7th century and gradually faded away between the 12th and 13th centuries. One of the commonalities between the Ainu and the Satsumon was that both established villages near estuaries of rivers that were abundant in salmon and trout. Both the cultures used Salmon and trout as their main source of food.

Concurrently with the Satsumon culture, the Okhotsk culture flourished along the Sea of Okhotsk in Hokkaido. In this region, the Bear played an very important part in the lives of the people. They used to adorn their dwellings with Bear skulls. This aspect of their lives had a big impact on the Ainu culture as they as they also enshrined bear skulls on altars while performing religious ceremonies.

Below are some of the pictures of the exhibits at the museum.

Back from the museum as we went back to the hotel. The sun had set and as we sipped some hot coffee, we talked about the Ainu and their interesting methods.

The Ainu are “considered” to be the indigenous people of Japan, inhabiting the Northern island of Hokkaido, Sakhalin and the Kuril Islands. I use the word “considered” because ethnic Japanese, until recent times did not consider them as indigenous and raised questions on their very origins. It was only in 2009 that, the then Prime Minister Yukio Hatoyama for the first time, as a representative of the State, clearly described the Ainu as indigenous people.

The Ainu flourished in all of northern Japan during the Yayoi period (300 BC – 250 AD) around 2000 years ago. Over the years with the influx on Asians, they were driven off their lands, taking refuge in the northern islands of Japan where they now number less than 25,000.  The language has all but died with barely 15 or so elderly people who still have the ability to speak the dialect. Because they kept no written records, the true origins of the Ainu people will probably continue to remain a mystery.

Places to see near Abashiri