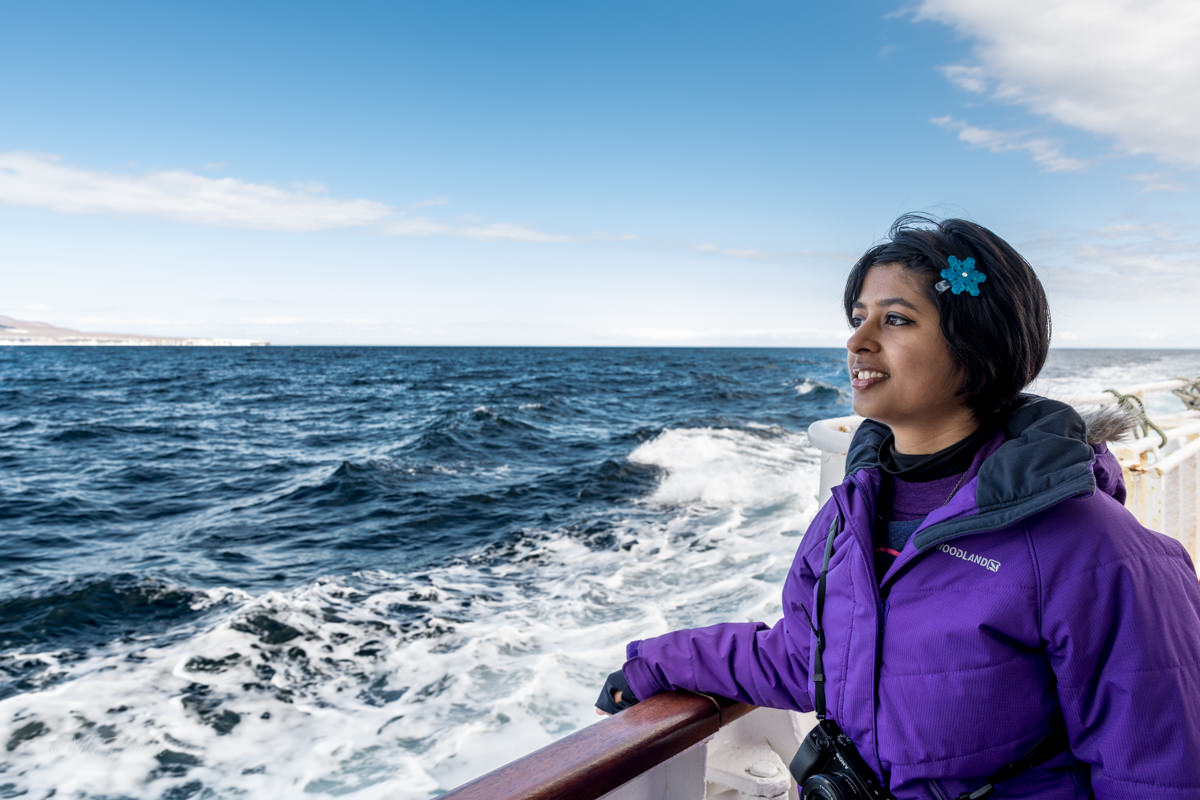 It was the day of our cruise on the sea of Okhotsk. We had booked the Aurora Ice Breaker cruise months in advance and we were looking forward to a ride among the famous ice drifts (流氷, Ryūhyō) of Abashiri.

The drift ice cruise starts at 9.30 am in the morning. We got up early and walked down to the harbor. The footpaths were covered in snow and extremely slippery at places. We walked slowly and carefully. As we walked, we talked about the interesting stories we came to know about the Ainu people of Hokkaido at the Museum, the day before. On the way, we passed a very peaceful Abashiri river. The river had a thin layer of ice over the water.

Abashiri River (網走川, Abashiri-gawa) flows right through Abashiri and exits into the Sea of Okhotsk.

As we neared the harbor, the ice thickened forming rounded circles of ice like lotus leaves in a lake.

The frozen ice look like lotus leaves spread over a lake

Each year ice forms near the mouth of the Amur River in Russia. From there it drifts southward aided by the currents until it eventually rolls onto the coast of northern Hokkaido. The sea ice typically reaches Abashiri in mid to late January and is said to clear up by mid April. Unfortunately due to rapidly changing climate, we were informed at the ticket counter that there would be no ice drifts on the day.

The Abashiri Port serves an important role as a logistics hub for Abashiri and other areas in the greater Hokumo region.

The ice was supposed to stay till mid April, but global warming has changed everything so much around the northern parts of Japan. Lucky for us, we did see some drift ice floating by on the Okhotsk, as we rode into Abashiri, the day before.

Drift ice is symbolic of winter in Abashiri and the Okhotsk region. This natural phenomenon has had a tremendous influence on the local culture and the drift ice is represented in various forms of chocolates, candies and ice-creams. They even celebrate a drift ice festival each year. While drift ice can be observed along the entire Sea of Okhotsk coast from Wakkanai to the Shiretoko Peninsula, it gets thickest around Abashiri.

Anyways, they offered us a discounted cruise into the bay. We went up to the deck on the Aurora. The 1st and 2nd floor rooms have seating arrangements. On the lower decks, people can relax at the lounge in front of huge windows to experience the beautiful Okhotsk. The lounge has interior heating to keep you warm. It also features a nice cafe. For us it was the observation deck at the top from where we could feel the thrill of the cruise.

Aurora Drift Ice Breaker is designed with sloping bows and reinforced hull. The boat moving with speed, forces the sloping bow up onto the ice and the heavy weight of the boat breaks the ice chunks

We slowly moved out of the harbor and into the open sea. We passed many small lighthouses along the way. The wind picked up as we went further out to sea.On the boat, the captain provided us with some nice music.

One of the several lighthouses in the Abashiri Bay

The seagulls followed us like they were bidding us farewell. The went with the boat all the way until it turned around.

We were lucky to have a beautiful sunny day and thoroughly enjoyed cruising the Abashiri Harbor. The sea was a darkened shade of blue. In the blue we could make out Cape Notoro in a distance.

Cape Notoro over the cliff. The area can only be accessed by Cabs. No public buses are available

Far out into the sea, a few small pieces of drift ice were still making their southward journey.

The last remaining pieces of drift ice. The ice originates from the Amur River in Russia and drifts all the way into Abashiri.

From time to time, flurries would hit our face, sharply. The wind was howling in my ears as we reached the point of return. I had to pull my hoodies over my ears to shield myself from the cold.

The Sea gulls welcomed us back as we neared the harbor.

A strange rock formation in the bay near the Abashiri Harbor

We reached the shore at around noon. All the shops had opened and we shopped for some souvenirs. I got myself a Miko key chain and some Hokkaido Chocolates. We shared a “Drift Ice” special ice cream and then we were off to the station to catch the train to Asahikawa.

Even though we did have a good time, we missed the ice drifts. I would suggest going maybe a couple of weeks earlier. I did see some ice drifts as we were entering Abashiri. Apart from the cruise, the museums were also entertaining, so I would suggest staying behind for a couple of days. Thanks for reading my journal. If you have any questions, please leave me a comment.

What if there is no drift ice?

The Sunset Cruise may be cancelled if the minimum passenger count is not met, or if there are no drift ice to be seen. From March 15 onwards, the ship may not sail if at least 15 people have not made reservations by the day before.

When are the Sunset Cruise ships scheduled? 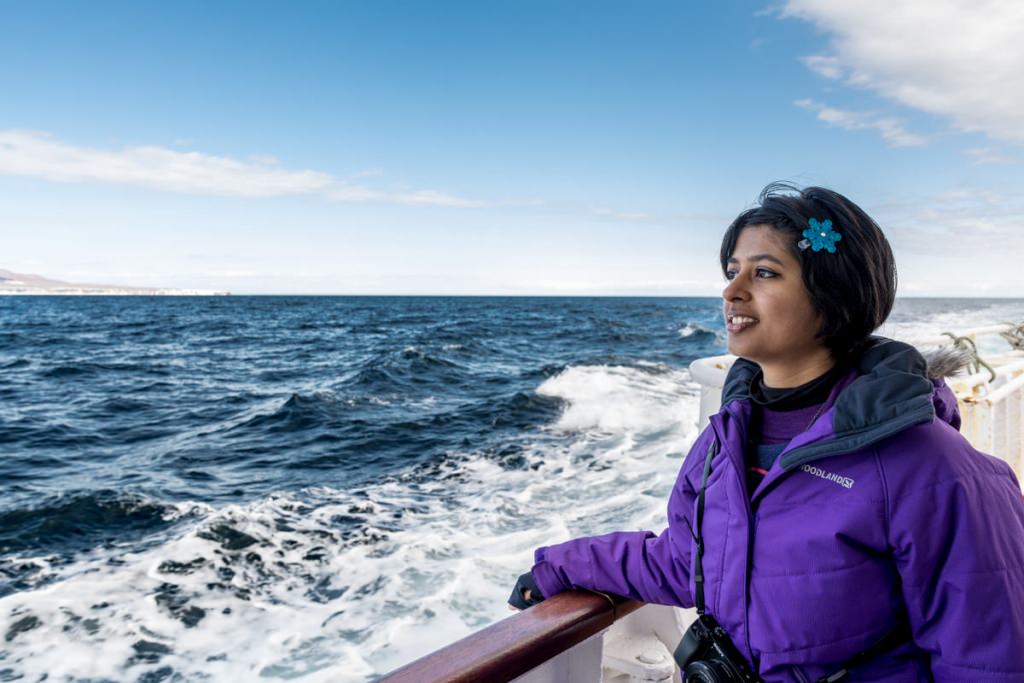 Places to see near Abashiri