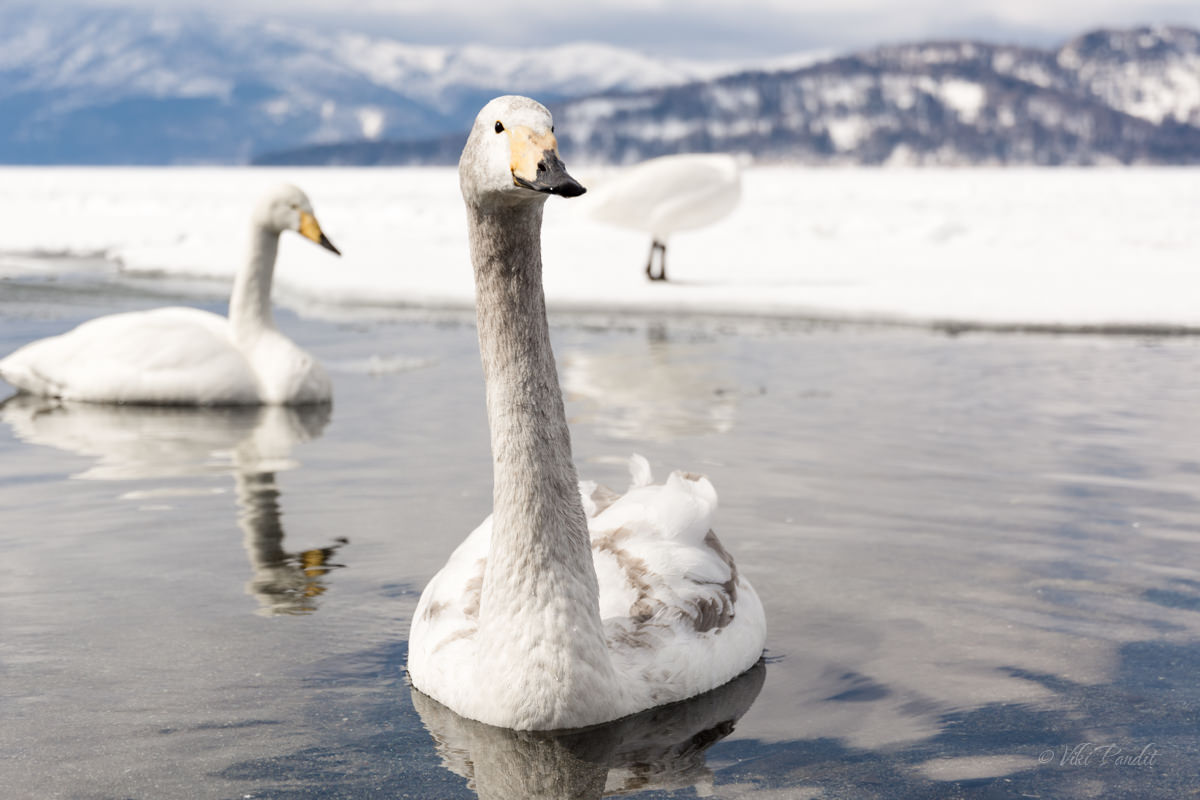 We woke up to a beautiful morning. It was our third day on the enchanting island of Hokkaido and I was looking forward to our tour of Akan National Park. We were lodged on the 9th floor of the Prince Kushiro Hotel and I could see the wide sea from our window. The roads were deserted and snow had created a carpet of white over the town. The thought of walking to the docks and capturing the sunrise did cross my mind but I controlled the temptation and prepared for the day’s trip.

At 8 am, Mani and I, went down to the reception and picked up our tickets for the White Pirika sightseeing bus. The White Pirika sightseeing tour offers an all-day round trip of the most popular nature spots in Akan National Park including Tancho Crane Reserve, Swan viewing at Lake Kussharo, Sulfur spewing Iōzan, Lake Mashū and Lake Akan. The tickets cost ¥4600 per person. The bus leaves from Kushiro station at 8:30 am. It makes a stop at Prince Kushiro Hotel so we just waited outside the Hotel for the bus to pick us up.

Hokkaido is one of the top winter birding and wildlife photography locations. The Akan National Park is home to a number of eye-catching iconic species: the resident Red-crowned Crane and Blakiston’s Fish Owl. In the winter you can also find the Whooper Swan and Steller’s Eagle. I was hoping to at least catch some of these today.

The bus was a few minutes late. As it stopped, a charming lady in a blazing red suit, got down to greet us. Her name was Shitona, she was our tour guide. She was not acquainted with English and spoke only in Japanese. It was quite helpful that Mani is fluent in Japanese and she translated most of what was said during the tour.

We took our seats towards the front of the bus. The bus was almost full and I was glad I had made our reservations from before.

Note: The White Pirika bus does not operate beyond March 6th.

The lady guide handed us a pamphlet and informed everyone about the route we would be taking along the tour. After a few turns, we left the city behind and entered the Kushiro Marshlands. Kushiro Marshland is a breeding ground for many animals including Japanese cranes. It is also a wildlife sanctuary registered under the Ramsar Convention. We didn’t stop at the observation point since there was nothing to see in the snow. In summers one can try walking on a boardwalk or even go canoeing in the marsh.

A Deer crossing on the way to Lake Kussharo

About 30 minutes into the drive, we reached the Tancho Crane Reserve. It is a popular spot for viewing Japanese cranes.

The Tancho have been believed to be a bird of good omen. It is very much respected by the local Ainu as Sarurunkamui (god of the marshland) since ancient times. In 1935, Tancho’s habitat was listed as one of Japan’s natural monument. Later in 1952 it was upgraded to “special natural monument.”

Within a few minutes, a couple of cranes flew into the park from nowhere. The couple played around in the snow. In-between one of them would give out a loud shrieking call. Hearing the call, another bunch of cranes came by, for our view pleasure.

The Tancho are non-migratory in nature and use the Kushiro marshland as their nesting ground. In recent years, the red-crowned crane population has grown rapidly due to careful protection measures, but this has also resulted in an increase in the damage to local farmers’ crops. The wetlands that were initially breeding grounds have become too small, resulting in cranes breeding near residential areas. These cranes then help themselves to farmers’ crops or get into their barns and eat the cows’ feed, because it’s much easier than searching for the food they are meant to eat.

Despite these problems, the locals love them. In winters when food is scarce, the locals bring in corn for the birds. Due to the warm affection of these loving people, the Tancho numbers have increased year after year. Currently there are confirmed 600+ birds living in the area.

After capturing some of these beautiful birds, we were back at the bus stand, getting ready for our next destination. There is a cafe near the entrance to the reserve so If you are feeling the need for it you can enjoy a warm drink.

After spending some time watching the cranes playing in the snow, we left for Lake Kussharo. Lake Kussharo is the largest of the three caldera lakes that make up Akan National Park. As with most geographic names in Hokkaido, the lake derives its name from the Ainu.

The Ainu word “Kuccharo,” means “The place where a lake becomes a river.”

Lake Kussharo is thought to have been formed over 100,000 years ago as a result of volcanic eruptions. Volcanic activity is still active in these parts and if you dig the sand near the banks, you can find hot water.

The lake is also known as Japan’s Loch Ness, after some reported sightings of a lake monster in early 20th century. The monster is referred to as Kusshii, most likely borrowed from that of Loch Ness’s Nessie.

Lake Kussharo is about an hours drive from the Tancho Crane Reserve . It appeared mostly frozen as we got off from the bus. We couldn’t find any shops or eateries nearby, so if you are going using your own vehicle make sure you pack the essentials.

As we neared the lake. I was amazed by its breathtaking beauty. The banks of this vast lake are lined with Sakhalin spruce, found only in Japan & Russia. Across the white lake in the far distance, I could make out the sprawling Mt. Mokoto.

Just opposite to the lake lies the sprawling Mt. Mokoto

Geographically Hokkaido is very close to Eastern Russia but, unlike that area, Hokkaido is readily accessible year-round, safe and with excellent infrastructure. Situated on the East Asian Flyway, a migratory route connecting northeast Asia with Southeast Asia and Australasia, Hokkaido offers various avian residents an enchanting break during their long journey.

As temperatures dip towards freezing in late autumn and early winter, migrant swans like the Bewick’s Swans and Whooper Swan, arrive in angelic flocks trumpeting their stirring calls as they fly. While the Bewick’s Swans will pass through bound for Honshu, many of the Whooper Swans will linger, gracing the ice-free areas of the larger lakes and marshes through the winter months.

The whooper swan pronounced as hooper swan is found predominantly in the colder areas of the Northern Hemisphere. They have a deep honking call and, despite their size, are powerful fliers. The swans can migrate hundreds or even thousands of miles to their wintering sites like this one at Lake Kussharo.

The surface of the lake was frozen, but along the sandy beach, where the hot springs prevent any ice from forming, the swans were enjoying a nice swim in the water.

The whooper swan is a migratory Northern Hemisphere swan. It arrives at Lake Kussharo every year in winter

Far away from the city noise, this place is truly relaxing. Ignoring the few of us, the swans swam around enjoying nature at their own pace.

The Whooper Swan has a pure white plumage. The webbed feet and legs are black. Half of the beak is orangey-yellow (at the base), while the tip is black. These markings on the bill differ and individuals can be recognized by their bill pattern. The male is called a “cob,” the female “pen,” and their chicks are known as “cygnets”.

Swans feed primarily on aquatic plants; but they also eat grain, grasses, and crop foods, such as wheat, potatoes, and carrots – especially in the winter when other food sources aren’t readily available.

Their long necks give them an advantage over the short-necked ducks, as they can feed in deeper waters than geese or ducks by uprooting plants and snapping off the leaves and stems of plants growing underwater.

In addition to whooper swans, I also noticed some Mallard ducks. This one below is a male with a distinctive green head, yellow bill, chestnut breast, and gray body. Females are mottled brown with orange and black splotches on the bill.

Apart from the Whopper Swans, some other birds like the Mallard Duck can also be seen at Lake Kussharo

Lake Kussharo is a lovely place to put up your feet and relax. In contrast to the historical and cultural aspects of mainland Japan to the south, Japan’s northern island of Hokkaido offers Japan’s wilder, more outdoor, side. It is ideal year-round for nature travel, and especially for birders, birdwatchers, and bird photographers. I have heard in summers this place is also great for hiking and camping.

Hokkaido’s night birds are dramatic too, and none more so than the world’s largest owl and one of the world’s rarest species – Blakiston’s Fish Owl. I hope to come down again to capture some more.

Lake Kussharo is the perfect place to put your feet up and relax.

We wanted to stay back a little longer but this is the problem with set tours, they allow very little time to enjoy a place truly. So, off we went back to the bus. Our next stop: the sulfur spewing Mt Io. 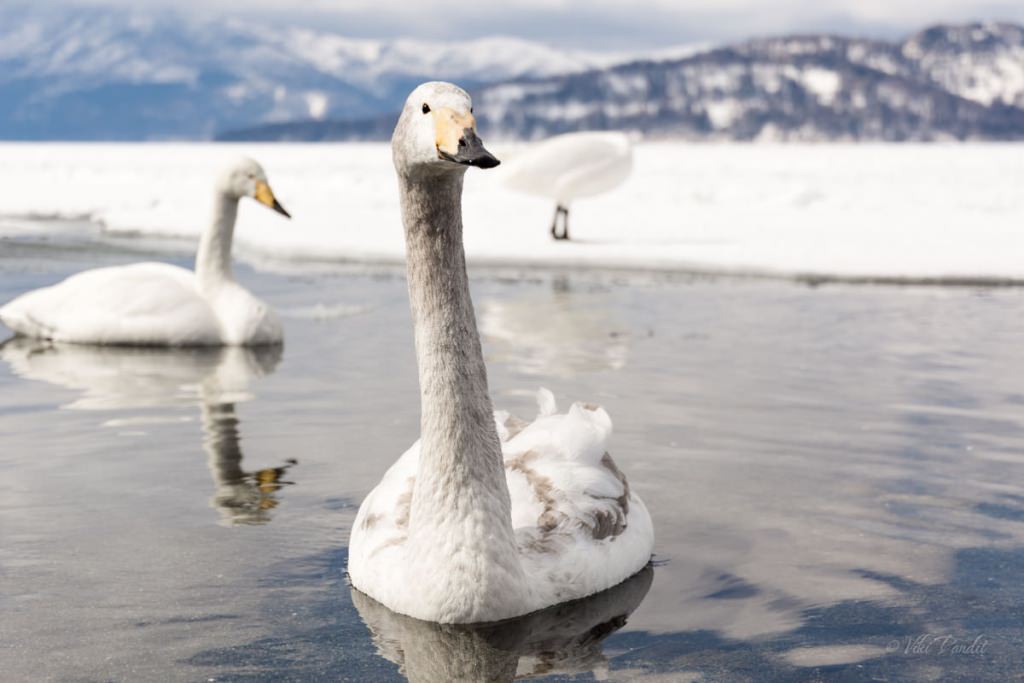 Places to see near Teshikaga