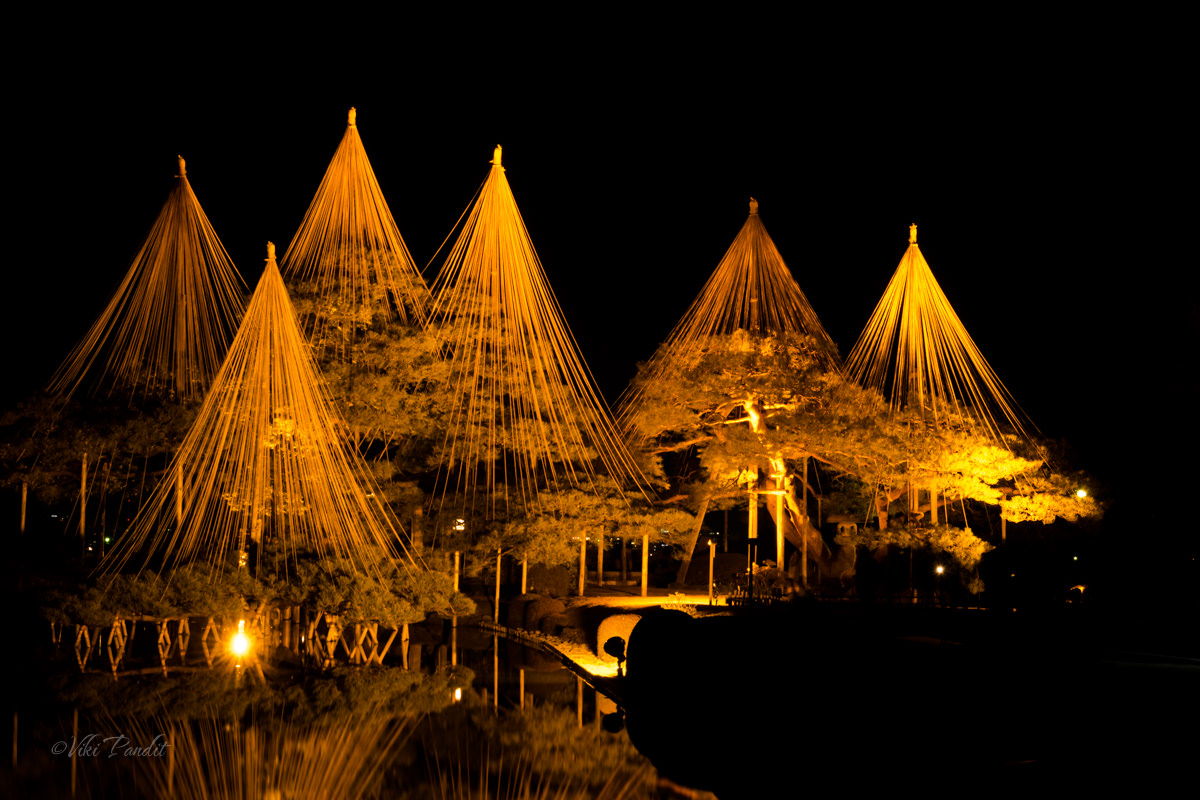 After two solo trips to Shirahama and Nachi, I was bubbling with confidence. I was ready with the train information as we reached Osaka from Nara. Mani had taught me well. We took the Thunderbird train from Kyoto. This route does not run any Shinkansen trains. The Thunderbird limited express trains are the fastest way to Kanazawa from Osaka, travelling over the Tokaido Main Line and then moving on to Kosei Line and eventually up the Hokuriku Line.

Along the way we passed the lovely Lake Biwa. It was a grey day and the grayness made even Lake Biwa look depressed. As the train entered the Fukui area, we saw a bit of snow along the tracks.

We reached the Kanazawa Station at around 1 pm. The station is huge with a sprawling shopping center. Outside the gates there is a huge dome. Towards the front of the metal dome there is a wooden gate named “Tsuzumi-mon,” in the shape of a traditional Japanese instrument called Tsuzumi (hand drums).

The bus stand is just beside the Tsuzumi-mon gate. We took the next available bus to the Kenrokuen Garden. The bus dropped us off near one of the gates to the Park. The one way ride from Kanazawa Station takes about 20 minutes and costs ¥200 per head on the Kenrokuen Shuttle Bus. The bus honored my JR Pass and I didn’t require a ticket.

It was lunchtime, so we decided to take lunch and then visit the garden. The wide road was lined with shops on both sides. A few had snow boots on display, though it didn’t feel like it had snowed recently. I had been thinking of getting one for myself for the tour of Hokkaido, but didn’t find any cool ones. At the corner of the road we found a Subway restaurant. We had a light meal of fries and sandwiches and then began our walk towards the garden.

The garden was abandoned in the Meiji Era (1868–1912) and was lost to the ravages of time. Not too long ago in 2013, it was reconstructed with the help of a five-year excavation survey that began in 2008. Various old drawings with literary descriptions helped in bringing back the garden as it was during feudal times. In order to preserve the remains of the original garden, new soil was laid over the entire area of the old garden and the new garden was constructed over this layer. The reconstruction was finally completed in March 2015 and public were able to view this lovely work of art that used to be a favorite relaxing place of past feudal lords.

Based on old picture maps, this garden was reconstructed above the ruins of the original garden buried in the ground

At the other end of the garden, a fleet of stone stairs took us to the Castle grounds. The sprawling snow-white Kanazawa Castle is spread across a huge area.

The castle was originally founded in 1580 and has been razed to the ground in multiple fires. Today the oldest existing structure on the castle grounds is the Ishikawa Gate from 1788.

The castle burnt down several times over the centuries, and the most recent fires of 1881 were survived only by two storehouses and the Ishikawa-mon Gate

The castle was first founded by Sakuma Morimasa, who laid the foundation of the moats and the castle town. After the Battle of Shizugatake in 1583, Maeda Toshiie took control and initiated the building of the beautiful castle. Kanazawa’s growth is largely dedicated to the growing power of Maeda Toshiie from 1580 to 1700. It was but a small town of only 5000 people before Maeda and his clan’s continuous efforts put the city on the trade map.

The Maeda clan ruled over the Kaga region from Kanazawa for 14 generations until the coming of the Meiji Restoration. Near the castle, there is another small pond. We sat there for a bit. The best thing I love about being in Japan is there is so much peace and tranquility.

After some time we moved on towards the garden. It was late afternoon by the time we reached the entrance to the garden.

On the road beside the garden there are various shops selling souvenirs and daily use items. Some eateries were exhibiting a special gold dust flavored ice creams. They were quite expensive at ¥800 a piece. We walked along the street, waiting for the evening to set in, since that is when the garden would be illuminated.

As much as they looked appealing, they cost ¥800 apiece

We went inside the garden at around 4 pm. There’s an entrance fee of ¥310 per head. The garden is on an elevated hill and one can see the sprawling city of Kanazawa from up here.

The Kenroku-en garden was first established in the 17th century by the feudal lords of Kaga as their private garden. The garden belonged to the Maeda family, who reigned over Ishikawa and Toyama areas during feudal times. It was only after 1874 that the garden was opened to the public.

Right after we entered the garden, we found ourselves in front of the Kasumiga-ike Pond. It is the biggest pond in the garden and contains many beautiful elements arranged around it such as the Uchihashi-tei tea house, Kotoji lantern, Niji-bashi bridge and the huge Karasaki pine tree.

The stone lantern beside the pond is designed in the image of the Japanese koto (harp). The lantern symbolizes the Kenrokuen Garden and can be found pictured on most tourism pamphlets for Kanazawa. I found the scene of this lantern with the surrounding trees most impressive.

The over two-meter tall Kotojitoro Lantern, uniquely built with two legs instead of one, stands at the northern bank of Kasumigaike Pond

On the opposite side of the pond one can find the Uchihashi-tei. It is one of the four tea houses in Kenrokuen. The house is supported by the stone legs but looks as if it is floating on the Kasumiga-ike Pond.

Uchihashi-tei, this tea house was rebuilt in 1874 on the edge of the pond

There was still time for the lights to come on so we wandered into the deeper areas of the garden.

We came across a plum grove where some trees were just beginning to flower. Beside the plum grove one can find the Funanoochin Arbor – a boat-shaped resting area. Sitting here, tourists can enjoy the beauty of plum and cherry blossoms in spring. It must be a fantastic experience sitting in the arbor and reading a book, surrounded by all those plum blooms.

The plum grove was landscaped in 1968, as part of a project to commemorate the 100th anniversary of the start of the Meiji period. Saplings for the plum grove were gathered from various places across Japan. There are now about 200 trees of different varieties in the grove.

In winter, visitors are treated to the glorious view of snow-covered landscape with yukitsuri holding the pine branches together in beautiful geometric patterns. Yukitsuri is a method of protecting the branches of the pine trees in the garden with ropes attached in a conical array to the trees in order to prevent the branches from breaking. It snows heavily in winter in this region, and the yuki-tsuri keeps the branches of trees from breaking under the weight of snow. Unfortunately there wasn’t any snow around.

Dusk was drawing nearer, when it began to snow. This would be surprising to many, but it was my first experience of a snowfall. The tiny flakes were floating in the light wind, and as I walked, some of them caressed my face gently. It feels so different from the depressing rainfall. Unfortunately within a few minutes, it had started to rain pretty heavily. It was impractical to stay on any longer at the garden, so we headed back to the station.

I went back during the week to capture the illuminated garden. The kenroku-en illuminations are too good to miss. It was evening by the time I reached the garden. The main gate was closed and visitors were directed towards another gate on the side. A queue had formed very quickly. Most around me appeared to be seasoned photographers, ready with their tripods and flashes. We were allowed entry into the garden at 5 pm. Being a weekday, they had waived off the entry fee for the day.

By 5.30 pm the lights had started to come on. I too had brought along my tripod. I set it up and took some shots near the Kasumiga-ike Pond.

After taking some shots, I walked towards the opposite side of the Kasumiga-ike Pond. From there I shot the below photo of the Pine trees with their reflection falling in the pond.

Located in the center of Kenrokuen, this pond is the largest in the garden.

On the left, beside me the Uchihashi-tei Tea House appeared to be a boathouse in an enchanted forest.

I went around a full circle back to the pine trees. A large group of people had gathered there by then. One by one they would take selfies and move out in a very orderly fashion. I waited for a few minutes and found a moment to capture the glowing pine trees.

While there is far less foliage in winter, the night illumination gives the garden a magical look

Back to the story

After the rain stopped us from enjoying a romantic evening at the Kenroku-en garden we went back to the station. We still had some time for the train to Toyama, so we walked into the shopping complex. The basement is huge and used for holding events and such.

The name Kenroku-en means ‘Six Attributes Garden’. A garden that possesses these six attributes of “spaciousness, seclusion, artifice, antiquity, water-courses and panoramas” is believed to be the perfect garden. Kenroku-en has them all! I had a lovely time at the garden and would highly recommend going there during winter illuminations.

Thank you for reading. Please leave me a comment if you liked the post or follow my story as I walk in knee-deep snow at Ainokura village.

Kenroku-en is one of the Three Great Gardens of Japan.

When was the Kenroku-en built?

Kenroku-en was built in the Edo period. It used to be the outer garden of the Kanazawa castle.

Kenroku-en garden was created by the Maeda family over three centuries beginning in 1676 CE with a landscape garden called Renchitei. This garden was destroyed by fire in 1759, but was restored in 1774, and in 1822 the garden acquired its current name Kenroku-en.

What is the admission fees to enter Kenroku-en?

What are the visiting hours for Kenroku-en?

Early Admission Hours:
From 5:00 (April to August from 4:00, November to February from 6:00)
*Early admission visitors must exit the garden before the start of regular hours 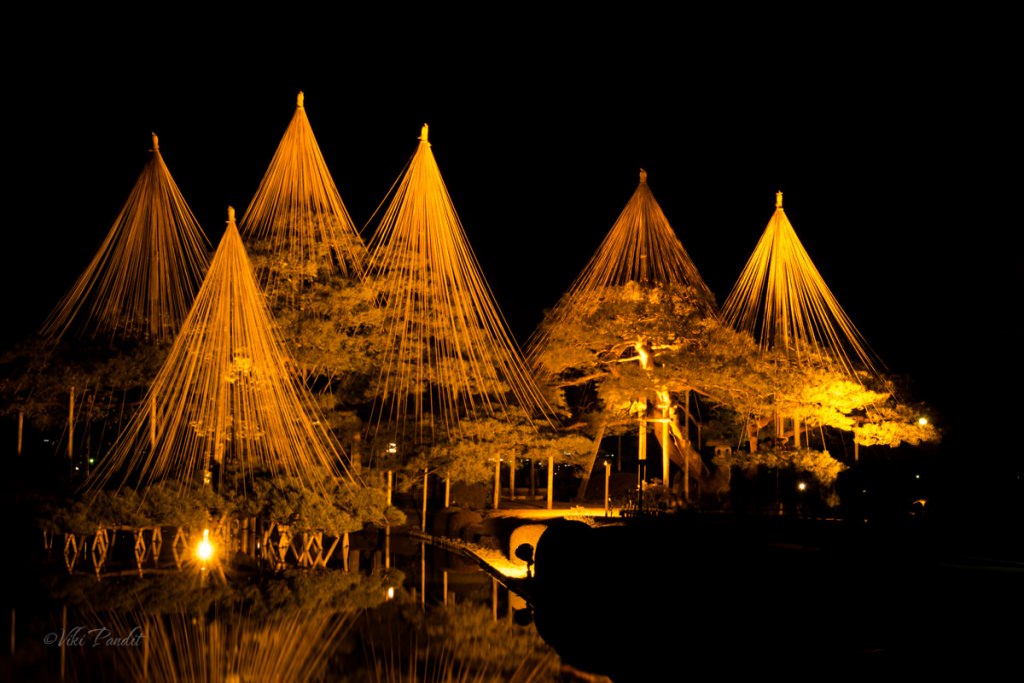 Places to see near Kanazawa-shi