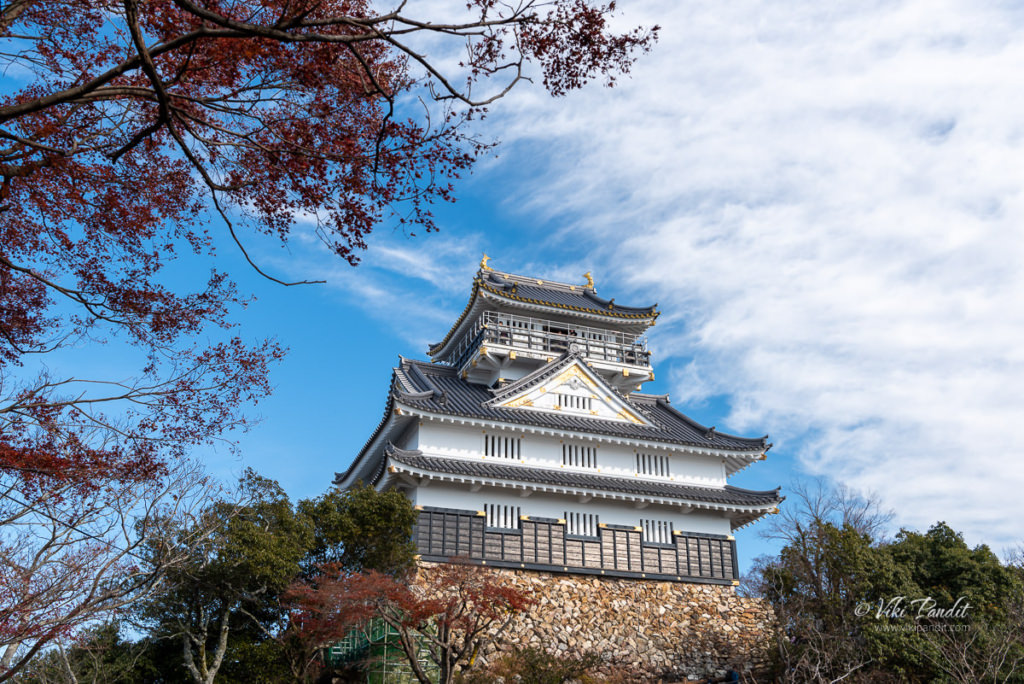 Today is an interesting day as I get to explore two of Japan’s most beautiful castles in the Chubu region. The first one, Gifu Castle or Gifu-jo, as it is called in Japanese, rests atop Mt. Kinka, located in the city of Gifu in Gifu Prefecture.

The castle was initially established here as a fortress by Nikaido Yukimasa under orders from the Kamakura Shogunate in 1201 CE. It was then known as Inabayama Castle. The fortress was later renovated into the polished structure we see today by Saito Dosan who became master of the castle in 1539.

In 1567 Oda Nobunaga invaded Mino and took control of Inabayama Castle from Saito Yoshitatsu, the grandson of Saito Dosan. After the conquest he moved his headquarters here from Komaki Castle and renamed the castle to Gifu-jo.

I was staying at the Keihan Kyoto Grande in Kyoto. After an early breakfast we caught the Hida Limited Express to Gifu. It takes about an hour and a half on the Express train. You can also catch the Shinkansen on the same line, which is about 30 minutes faster.

The Hida limited express train service operates only one service a day from Osaka to Takayama via Gifu.

It was a beautiful morning as we got down at Gifu Station. The station first opened in 1887. It was then named Kanō Station and was primarily used for transporting goods. In late 1888, it was upgraded to a passenger rail station, at which point its name was changed to Gifu Station.

Gifu JR Station contains the Gifu Tourist Information Office on the 2nd floor and a number of shops and cafes including MOS Burger and Mister Donut. Like most urban stations, Gifu Station has two exits. On the South exit there is not much to see except for a unique triangle shaped structure that doubles up as the entrance gate to the station.

On the north side of JR Gifu Station, right outside, lies a golden statue of Oda Nobunaga, standing gracefully over a high pedestal as if looking over the city. You can also find bus boarding platforms for all of the bus lines nearby. To get to Gifu Castle you need to wait for the bus that boards at Bay #12 or #13.

While waiting for your bus you might also catch a glimpse of the many green Gifu Nobunaga buses leaving the bus terminal at the station. The city has strong connections with the warlord Oda Nobunaga which I will go over briefly further down in my journal.

Gifu city existed long before Nobunaga. It was called Inokuchi back then. The city has always played an important role in Japan’s history due to its strategic location in the heart of Japan. “Control Gifu and you control Japan” was a common phrase used during the Sengoku period (1467-1568 CE).

The Sengoku Period, also known as the Warring States Period, was a turbulent and violent period of Japanese history when rival warlords or daimyo fought bitterly for control of Japan. It was in these chaotic times when Nobunaga conquered Gifu Castle, up-till then known as Inabayama Castle and changed the name of both the castle and town to Gifu.

The choice of name was an interesting one. He took the first character (岐) gi from Qishan (岐山), the legendary mountain from which most of ancient China was unified. The second character (阜) fu means “base of the mountain” and comes from Qufu (曲阜), the birthplace of Confucius. Nobunaga chose to use the newly renamed castle and its mountain (Kinkazan) as his base of operations in his mission to unify and control Japan. Oda Nobunaga is no longer around but you can find traces of him all around Gifu city.

After a bit of a wait we got on the bus to the Castle. After a short ride of 20 minutes or so, the bus dropped us off on a sidewalk near the base of Kinkazan.

On the way to Gifu Park

From the bus stop itself you can view the castle sitting gracefully atop the Kinkazan mountain. From there we walked to Gifu park, located at the base of the mountain. Previously called Inabayama, the graceful mountain has long served as the representative symbol of Gifu.

In 2006, the park was selected as one of Japan’s Top 100 Public Historical Parks. Though Mount Kinka was strategically important for military purposes, living in the castle atop the mountain would have made daily life very difficult. As such, many important rulers built their main residences at the base of the mountain in modern-day Gifu Park.

Gifu Park is blessed with stunning nature and is the perfect place to enjoy the beautiful colours of the autumn leaves in fall. The best season for viewing autumn leaves is from mid- to late November.

Fall trees at base of Gifu Castle

This is the location of the former entrance to ODA Nobunaga’s residence.
Period artifacts such as passages and stone fences uncovered in archaeological excavations have been preserved and are displayed here.
You can see a passage made of rare giant stone construction, the remains of something like soil barriers, and fragments of foundation stones for staircase-shaped waterways.

Fall trees at base of Gifu Castle

On the east side of the park, there is a vermilion Three Storied Pagoda standing among the trees on a mountainside. It was built in 1916 in commemoration of Emperor Taisho’s accession to the throne.

In order to reach the castle, you can either take a 3-minute gondola ride on the Kinkazan Ropeway or hike your way up the mountain via one of the 4 different trails of varying steepness.

Kinkazan Ropeway takes you from Gifu Park to a midway stop of Mt. Kinka in 4 minutes. During the ride, you can enjoy the dynamic primeval forests covering Kinkazan, the beautiful stream of Nagara River, and the cityscape of Gifu. For a limited period in summer, the ropeway runs until nighttime for night enthusiasts.

The round trip cost us 1080 yen per person. You can also buy single ride tickets just to go up and then hike down the mountain via numerous marked trails.

Centuries ago, the mountain was protected as a hunting ground for the Owari Clan, preserving the trees from being used to build the area as it grew from a small town to a large city. Today, the forest is designated as a national forest, giving protection to the over 700 types of plants and 80 types of birds that can be found on the mountain.

Stairs on the way to Gifu Castle

Gifu Castle was originally built by the Nikaidō clan between 1201 and 1204 during the Kamakura Period. Originally called Inabayama Castle, Gifu Castle has gone through a great number of repairs over the course of several generations.

Even though Gifu Castle was considered to be an impenetrable castle, it was once taken over by a mere sixteen men.

In 1601, Gifu Castle was destroyed and the castle towers and turrets were moved to Kano Castle. The castle eventually fell into disrepair and vanished from Gifu’s skyline. The castle we see today was reconstructed using ferroconcrete in 1956.

Inside the castle, there are three floors with exhibits representing the castle’s past. With maps, weapons, pictures and other artifacts on display, visitors can recreate the story of Gifu Castle. On the top floor of the castle, an observation deck, visitors can enjoy a 360-degree panoramic view of the surrounding area, including the Nagara River and Nagoya.

Oda Nobunaga was a powerful samurai warlord in Japan during the Sengoku Jidai (Warring States period) in the late 16th century. He is often called the first great unifier of Japan, as he conquered about a third of the country during his quest of unification before his death.

Nobunaga was born in nearby Owari domain (modern day Aichi Prefecture) and soon rose to fame due to his military conquests and victories. He is recognised as one of Japan’s greatest rulers.

Gifu City was where he realised his dream and its possibilities. It became the first stepping stone in his grand plan of unification of Japan after centuries of civil war. Nobunaga quickly established his lavish palace at the foot of Mount Kinka and a castle town flourished around the castle and mountain. A Portuguese missionary at the time describes Gifu as a “bustling Babylon” rivalling any grand city of the time in Europe.

Today, the citizens of Gifu City continue to honor Nobunaga and his contributions to the city, such as through the Gifu Nobunaga Festival – the city’s most important autumn festival held on the first full weekend of October. Parades of samurai and other historical figures, among additional events, keep his memory very much alive.

The top floor, a watchtower with a ledge running around its perimeter, is a fantastic vantage point from which to look down upon the city in a 360-degree panoramic view! From the turret you can get unhindered views of Nagara river, famous for cormorant fishing. To the east is the magnificient view of Mt. Ena and the Kiso mountains. To the north you can view the mountain range of Norikura and the Japan Alps. To the South you can view the vast expanse of the grand plains of Noubi with a view of the Kiso river serenly flowing into the Ise Bay.

At various points throughout the year, the castle is also open to night viewing, providing an awe-inspiring view of the city.

If you are a fan of samurai culture and Japanese history, then you should definitely pay this historic city a visit and trace the roots of the famous Oda Nobunaga.

If you have time, don’t take the ropeway to the top. Take one of the 4 trails to the top of Kinkazan. It’s generally cool and quiet, making for a nice walk. Nearby the base of Mt. Kinkazan is also a small temple with a huge Buddha made from lacquered paper

Thanks for reading! Please consider leaving your comments or reviews. From Gifu I made my way to Inuyama Castle to catch one of the oldest original castles at sunset.

Nobunaga Festival | October
The locals love him in this city and he is regarded as a local hero and almost founding father like figure. They celebrate him every year by holding a festival called The Gifu Nobunaga Festival. It is held in October and features a samurai warrior parade down the main street of Gifu City.

Places to see near Gifu Castle