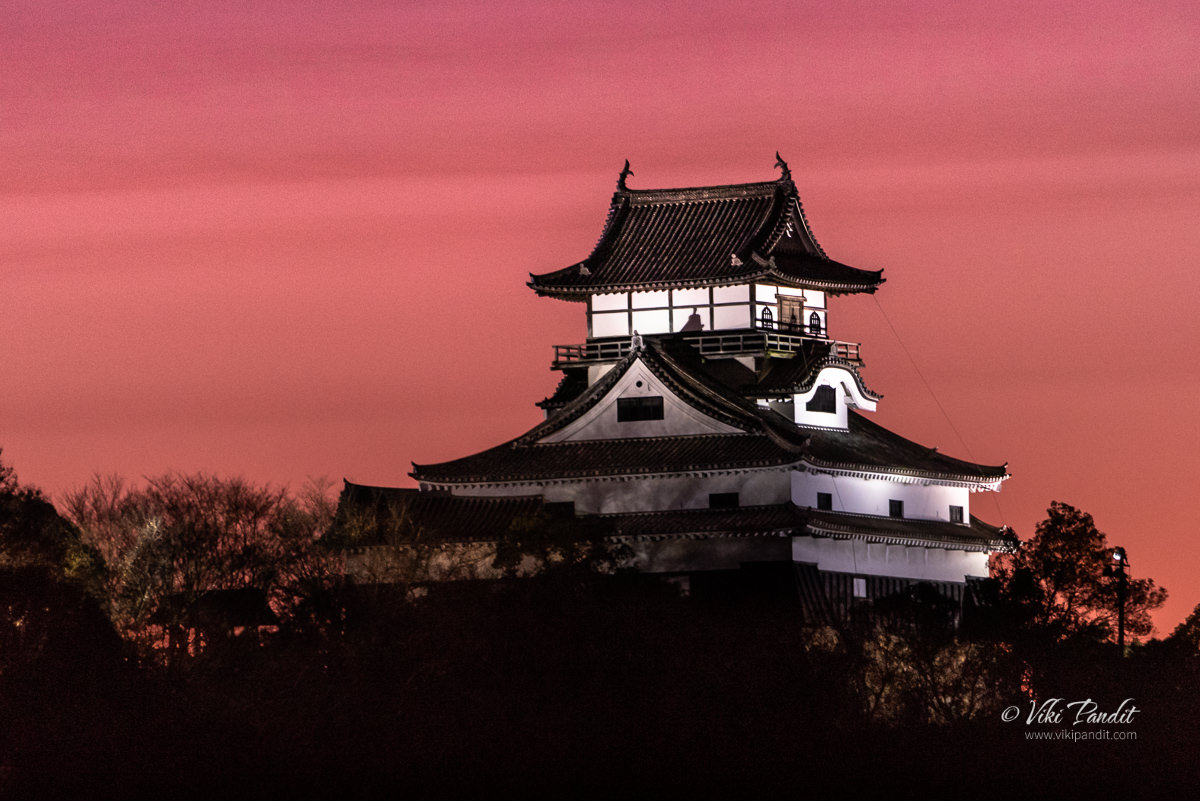 Located in the outskirts of Nagoya, Inuyama Castle is one of the 12 original Japanese castles. Founded in 1440 CE along the Kiso river, it dominates the quaint town of Inuyama from its stunning position over the hill.

After an interesting morning at Gifu Castle, we took the JR train to Unuma Station. From the station its a 25 minute walk to the Castle. Please note that I used the JR line because I had the JR Pass on me. If you are paying for tickets, it would be more meaningful to use the Meitetsu line and get down at the Inuyamayuen station which is a lot closer to the castle.

Getting down at JR Unuma Station

It was a beautiful weather and in the soft cool breeze, the walk to the castle was just lovely. After a few minutes we reached the Inuyama Bridge. Opened to the public in 2000, the iron beam bridge beautified with three arches, connects Kakamigahara in the Gifu Prefecture with Inuyama in the Aichi Prefecture. On the opposite side of the walkway you can see the Meitetsu Inuyama Line running parallel to the road.

Right after crossing the bridge over the Kiso river, we turned right, into a paved path lined with colorful momiji trees.

This straight path goes on for about 10 minutes before you hit a narrow winding elevated road that leads you to a huge white Torii. The path leading via this gate will lead you directly to the castle via the Nezutsu Shrine. However if you are one of those explorer types… follow me.

Just left to the huge white Torii, you will see a series of red torii gates. These gates lead to the Sanko Inari Shrine.

Located at the base of Inuyama Castle, Sanko Inari Shrine has a long, rich history. It’s name was originally Sankojisan and it is a highly revered place of worship for locals and tourists alike. In the Meiji period of Japan, because of the separation of gods and Buddhas, it became the Sanko Inari Shrine.

Every year on July 22, there is a traditional festival custom where families visit the shrine after dark carrying small red paper “chochin” lanterns hanging from branches of bamboo.

Before you enter through the red torii, you can find the Chozuya on your right, where you can wash your hands and purify yourself before praying at the shrine.

Another compelling legend is the “omokaru” stone. This special stone sits on a red cushion on the side of the main hall. You need to close your eyes while standing in front of the stone and hold a wish in your mind while imagining lifting the stone. It is said your wish will be as easy to realize as the perceived weight of the stone that you felt in your mind.

As an “inari” shrine, visitors also come to pray for a prosperous business. According to one legend, it is said that placing money in a perforated basket and washing coins with sacred water on the shrine grounds will increase the amount of money several times over!

Just beside the main hall of Sanko Inari Shrine lies a short row of torii gates. Walking through the gate only made me desperately want to visit Fushimi Inari Taisha.

This shrine is listed in the Engi-Shiki, in the chapter that lists Shinto shrines at the time. It is located in the Inuyama area as one of the Five Owari Shrines and enshrines the Sochinju (local Shinto deity) of the Nobi region. The Inuyama Festival at Haritsuna Shrine has been designated a national intangible folk cultural property.

The shrine was relocated to its present location in 1882. The building structure of the shrine looks similar to “Sanko Inari Shrine”, but the atmosphere of coexistence of vicissitudes and solemnity. People come here from afar to pray for easy childbirth, warding off misfortune, warding off evil, traffic safety, and child conception.

After capturing some pictures of the revered shrine we walked back to the stone path. Before joining the stone path, you can see an “Immortal Horse” statue. It is said that the white horse is the patron saint of children, so this Imperial God Horse can pray for children.

The curved stone path led us to the ticket boot. As of writing this article, it cost us ¥500 per person to enter the castle grounds.

In 1871, many of the castle’s outlying buildings were destroyed on the orders of the new Meiji government. The Honmaru-mon Gate, which is the main entrance to the castle is a wonderfully-done reconstruction.

A brief history of Inuyama Castle

The precise year Inuyama Castle was completed is uncertain. The castle guidebook claims it was completed in 1440. According to the Heian period Engishiki a Shinto shrine, the Haritsuna Shrine was moved to make way for the castle. The structure was rebuilt several times in the Muromachi period and the current configuration was largely the work of Oda Nobuyasu, Oda Nobunaga’s uncle in 1537.

Although the antiquated architectural style of the watchtower atop the tenshu has in the past led many historians to believe this to be the oldest extant tenshu in Japan, that honor goes to Maruoka Castle, built in 1576. Construction on the current main tenshu (donjon) at Inuyama began in 1601, and continued through 1620.

Inuyama Castle was the final obstacle against Oda Nobunaga’s unification of Owari Province. After Nobunaga had defeated the Imagawa clan at the Battle of Okehazama in 1560, his cousin, Oda Nobukiyo, seized Inuyama Castle with the support of Saito Yoshitasu on Mino Province. Nobugana recaptured the castle in 1564.

After Nobunaga’s death, Toyotomi Hideyoshi appointed Ishikawa Sadakiyo as castellan of Inuyama. Ishikawa rebuilt the defenses of the castle in line with contemporary designs and the current shape of the donjon is a result of this reconstruction. After the Battle of Sekigahara, the victorious Tokugawa Ieyasu expelled the Ishikawa clan and turned the castle over to Owari Domain.

Under the Tokugawa shogunate, the castle was governed by the Naruse clan, who ruled as daimyō of Inuyama Domain as vassals of the Owari Tokugawa clan until the Meiji restoration. The new Meiji government seized Inuyama Castle in 1871 and destroyed all of its auxiliary buildings except for the donjon; however, after the castle was damaged in the Great Nōbi earthquake, and it was returned to the Naruse family in 1895, on the condition that they repair and maintain it. The castle was thus unique in Japan in that it was privately owned.

Inuyama Castle was privately owned by the Naruse family until 2004 when ownership of the building and grounds was transferred to a non-profit foundation set up by the Aichi Prefecture’s Board of Education in Inuyama.

Zenkojiyama Park from the top of Inuyama Castle

It was long believed that the donjon of Inuyama Castle was moved to the castle from Kanayama Castle in 1599, until such theory was disproved as a result of examination through a large scale restoration work, involving the dismantling of the donjon, carried out between 1961 and 1965.

After capturing some external shots of the castle, we went up the age old structure. The floor broads creaked like we were going into some kind of haunted house. The roofs are quite low, even for me at 5’10.

You have to remove your shoes to enter the keep, but once inside, the wooden floor boards and naked pillars speak volumes. Oda Nobunaga, Toyotomi Hideyoshi and a host of famous historical samurai figures have trodden these floors.

The castle was for many years the private property of the Naruse clan, who were the lords during the seventeenth century up until 2004, when the management of the castle was entrusted to a public body.

Steep stairs throughout not only saved interior space, but hindered armored invaders, making defense of the castle easier. The first floor is divided into a number of chambers, with wide corridors around these chambers giving the samurai ample space to move in times of attack.

Its four floors contain armories, stock room of the lords and various defense systems. The 唐破風, Karahafu room as it’s called for the beautiful curved gables is located on one of the floors in the castle. The plover shaped windows are unique to Inuyama. The “kara” part of the world signifies the style came from China.

At the top of its steep stairs you will be able to go out and walk on its ramparts overlooking the entire valley and the Kiso River.

View of city from top of Inuyama Castle

As the Sun gradually started to go away for the day, it cast a beautiful golden glow over the surrounding hills.

We waited for the sun to slowly die over Inuyama and the mesmerizing twilight to set in. The castle overlooking the Kiso River is perfectly positioned for one of the most beautiful view of the city. This one view alone is worth the trip.

Some of the places around Inuyama Castle still has traces of the old times like Honmachi street where you can still find merchant houses from the Edo period, including the Jo-an tea room near Urakuen garden.

Once it was dusk we climbed down the Castle and made our way back to the Inuyamayuen Station. Even though I was carrying my JR Pass, it made much more sense to use the Meitetsu line to get to Nagoya from where we could easily get a train to Kyoto.

On the Inuyama bridge, I set up my tripod to capture a couple of shots of the illumitaed castle. Strategically positioned on the wedge shaped hill with the wide, fast flowing Kiso River running around and below it, and with unhindered views of the surrounding area, it was the first castle to be owned outright by the warlord Oda Nobunaga, although he didn’t stay long, or use it as a regular base. Instead, he left his uncle as caretaker while he went off to fight more battles.

To get a close-up shot of the castle I used my 80-400mm Nikon lens. It had gotten pretty cold by then. With freezing fingers I quickly captured a few shots of the castle and packed up.

From Inuyamayuen station we caught the Limited Express to Nagoya Station. The station is an unmanned station(at least at that time we were there) so be prepared with a bit of Japanese or you might run into trouble buying tickets at the counter.

Thanks for reading! Please leave me your comments or reviews. If you liked my story please consider following me on Instagram or continue with it as I visit the mesmerizing Fushimi Inari Taisha at night.

Inuyama Festival | April
During the first weekend of April, the city comes alive for local matsuri and its parade of floats decorate Honmachi Street. These floats are on display in a local museum. Another, in the castle, display weapons and armors from the civil wars of the sixteenth century.

Kiso River Long Run Fireworks | August
This weeklong fireworks festival takes place on the first nine days of August. During the festivities, Inuyama Castle is lit up for an extra exquisite night. 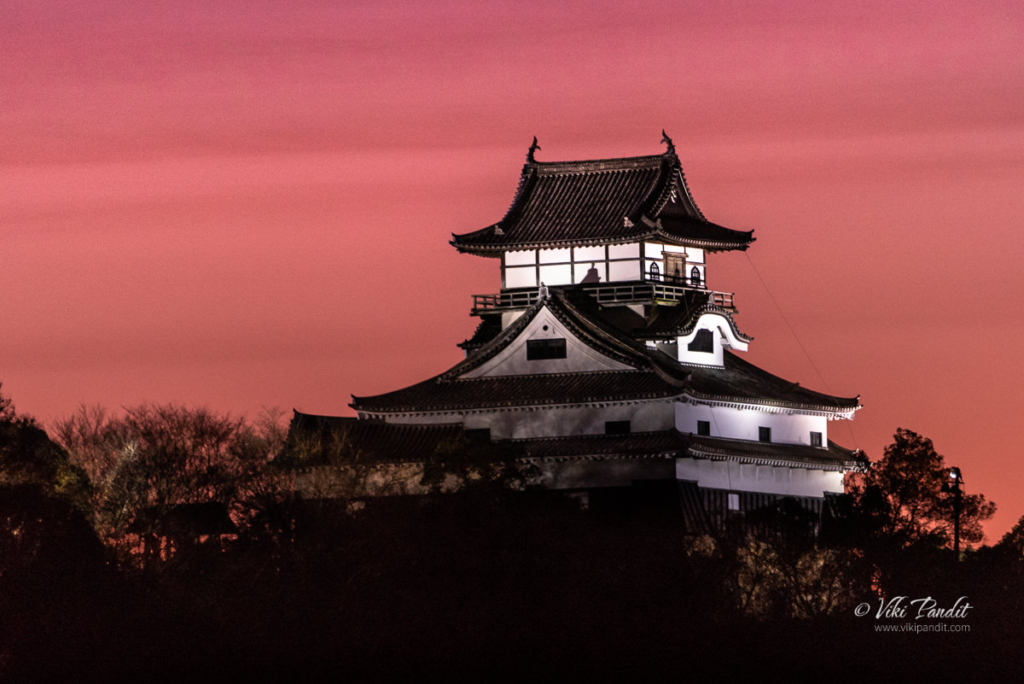 Places to see near Inuyama