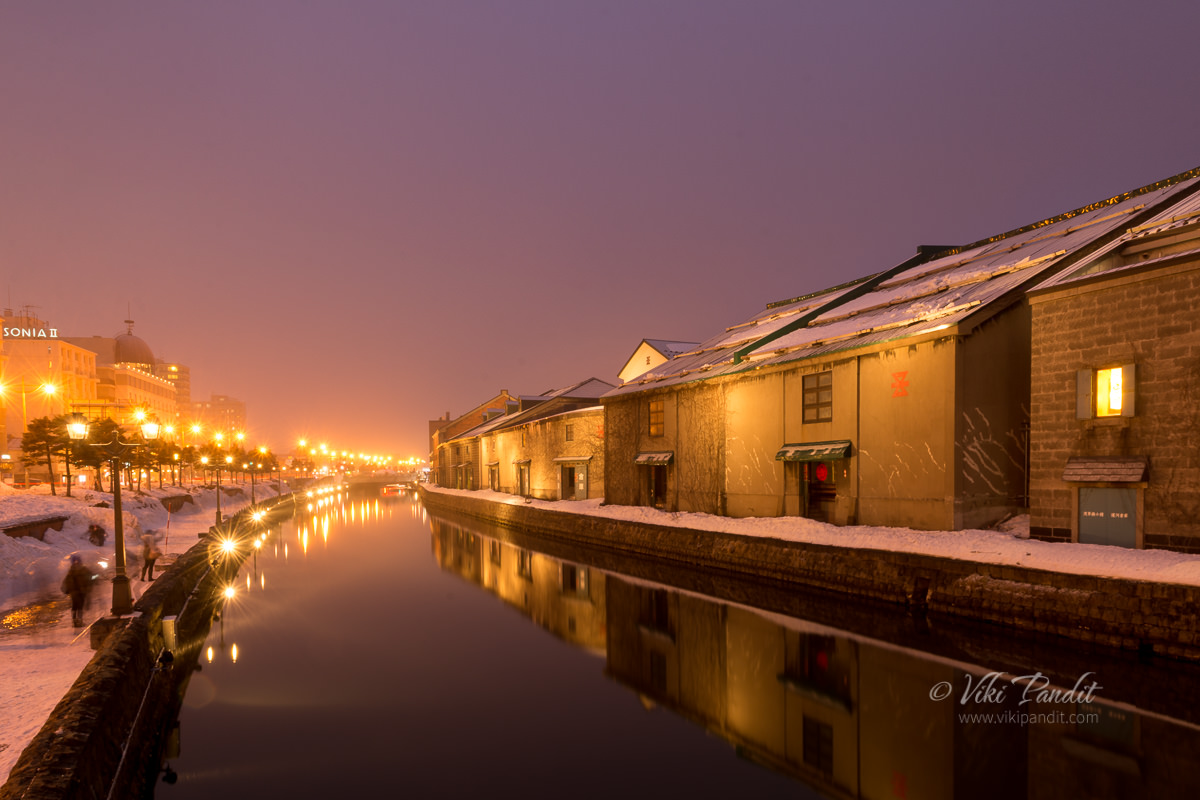 It was the last stretch of our winter tour of Hokkaido. We were back in Sapporo, the most happening city of the Hokkaido Prefecture. I wouldnt call it a beautiful morning, but the frozen lake at Nakajima Koen, just outside our Hotel looked amazing.

The JR Station at Sapporo is huge and connected to endless shopping arcades. We hung around for a bit and then headed for Mt Moiwa. Mount Moiwa is one of the most interesting spots to see the city from, as it lights up in the evening.

On the way the weather started to go downhill, real fast. It began snowing heavily and a strong cloud cover enveloped Mt. Moiwa. In that weather it was a futile effort to go to Mt. Moiwa.

The snowing got really heavy as we neared Mt. Moiwa. With the cloud cover we would never be able to see the city from the top so we decided to swap it for Otaru

so we decided instead, to head to Otaru, about half an hour northwest of Sapporo, hoping for better weather there. It is said that during evenings, the Otaru Canal, adorned with Victorian-style street lamps, makes for a very romantic stroll.

We had our Seishun 18 passes, so the train ride didn’t cost us anything. As we exited the JR Otaru Station, I could see the ocean right up ahead. Rather than going straight up to the coast, we took a right turn walking past some old stone buildings of this quaint city.

Otaru Staion is about 30 minutes away from Sapporo Station. One can see the Ocean right from the Station

A brief history of Otaru

Otaru (小樽) is a small harbor city with a long history. Its old-fashioned buildings make it one of the very interesting places to see in Hokkaido. It was initially inhabited by the Ainu people who gave it the name, “Otarunai” or “Ota-or-nai” meaning “river flowing through the sand”.

Over the centuries the Ainu population has gradually dwindled to near endangered numbers. During our journey through eastern Hokkaido, we came across a couple of places where we learned a lot about Ainu settlements. The https://www.vikipandit.com/hokkaido-museum-northern-peoples/Hokkaido Museum of Northern People in Abashiri, specially provides an amazing insight into the lives of the Ainu. They are a unique race and perhaps on a future visit to Hokkaido, I will get a chance to learn more about their culture.

As time passed, Otaru grew to be a thriving herring fishing town. Glass buoys were used to light up fishing boats at night to attract herrings in Ishikari Bay. The glass industry thus flourished to support the herring trade. The canal prospered specially in the Meiji Period since Otaru was the only significant port on Ishikari Bay.

From the latter part of the 19th century to the late 1920’s the city made significant leaps towards becoming a commercial hub. Many financial companies were all gathered in Otaru and it was then known as the “Northern Wall Street” – named after that world financial center of the Wall Street in New York. At present many of these historical buildings built using stone in western style architecture can still be found crammed in between modern buildings. Some of these vintage buildings have small signs, pointing out and explaining their history.

Along the road, you can find many restaurants in Otaru where you can enjoy Sushi with seasonal seafood caught on the coast line of the Sea of Japan.

It didn’t take a lot of time, maybe around 20 minutes to reach the Otaru Canal. One of the tourist loop buses passed by us as we crossed from Sakaimachi Street into the Canal area. The retro green and red Otaru tourist buses leaves from Otaru Station and circles Otaru’s interesting places operating on frequent regular schedules. They charge a flat fare of ￥210. A one-day bus pass can also be obtained for ￥750.

The Otaru Canal used to be a central part of the city’s busy harbor in the first half of the 20th century, when large vessels had to be unloaded by smaller ships, which then transported the goods to warehouses along the canal. However, in the 1950’s, the herring fishing industry went on a decline. It indirectly put pressure on the glass industry, as the demand for glass buoys plunged. They were forced to divert their business to produce refined glassware, The result today are numerous glass shops along the Sakaimachi Street just before the canal. Now, turned into cheap tourist thrills, you can watch the amazing process for a small admission fee of ￥900.

Otaru Canal in the Afternoon

Eventually, as time passed and modern dock facilities allowed for direct unloading of larger vessels, the canal started to became obsolete. A time came when it was scheduled to be land-filled but thanks to a citizens’ movement, a part of the canal was restored in the 1980’s. The warehouses along the canal were transformed into shops, cafes, museums and restaurants. The canal was chosen as the site of the town’s Snow Light Path Festival, when they light up the canal with the glass buoys.

The Otaru Canal is all about old world charm. It was still early evening so we walked leisurely along the canal. The canal is lined by old brick and stone buildings that appeared to be warehouses. Stone stairways, terraces, bridges and shops line up the old waterway. There is also a boat ride arranged for interested tourists. We reached a park at the end of the canal. Many boats were docked in beside the park.

After spending a few minutes at the park, we started our walk back towards the canal.

The dusk was setting in and the street lights were starting to light up. The scene looked straight out of a bygone era. The snowfall from Sapporo had caught up with us. The old buildings against the backdrop of falling snow and the beautiful canal made it look like an amazingly romantic setting. Soft tiny snowflakes were starting to fall on my eyelashes as I captured the memorable moment on my camera.

As we walked back the gas-lights were fully lit and the illumination on old warehouses had converted this place into sheer magic. The snowing was getting heavy as I set up my camera to take some long exposure shots from the bridge over the canal. Within minutes, the snow flakes were beating down on us. In the frenzy, we zipped up, pulling our hoodies over our heads. I remember my palms were hurting like crazy from the biting cold. Every couple of minutes, I had to put them back in my pockets to bring back some warmth in them. I couldn’t wear gloves since they make my hands clumsy while handling the camera.

Thankfully the breeze was taking the flakes away from the lens and I was able to get the beautiful shot below. Because of the long exposure the flakes have created a mist like appearance in the photo. Covered in snow, we were laughing at each other. We stayed on the bridge for some time, admiring the thrill of the moment.

In the evening, the Otaru Canal transforms into a magical place. The Victorian style lamps and warehouses made us feel like we were walking in some bygone pre-colonial era

After a few minutes, the snow eased on us and we made our way back to JR Otaru Station. It was not very late but the stores had downed their shutters already.

All the way back the moments kept coming back when the snowfall had surrounded us at the canal. The moment was gone and will possibly never repeat for me, but I can still go back in time looking at my captures and live it again.

Walking back to Otaru Station

Thanks for reading. Please leave me a comment if you liked the post or follow my story as I finally make it to summit of Mt Moiwa. 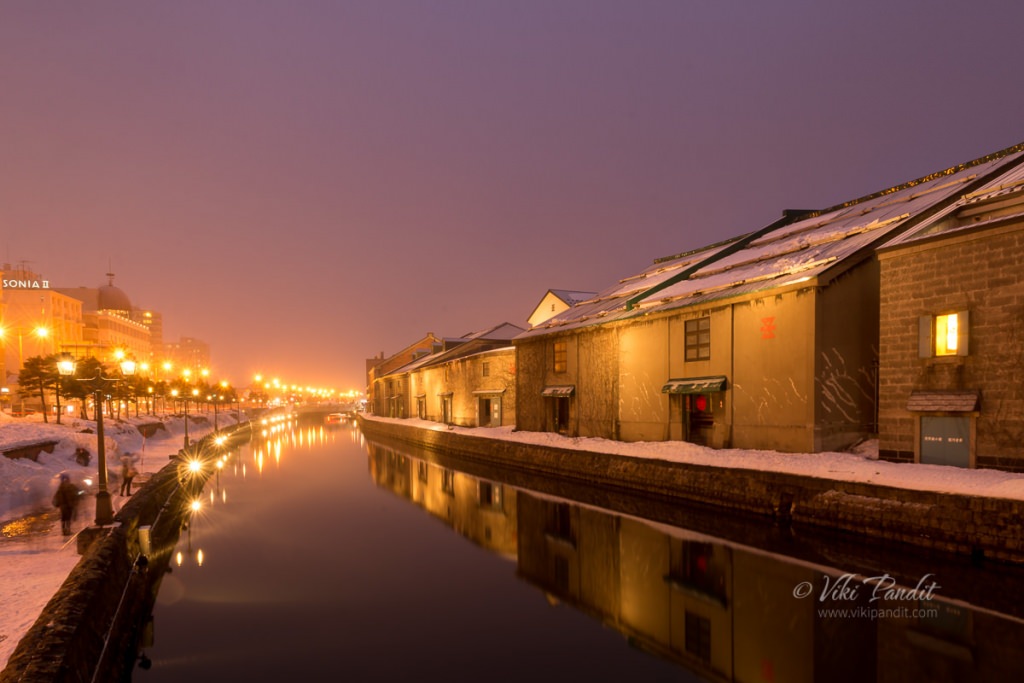 Places to see near Otaru