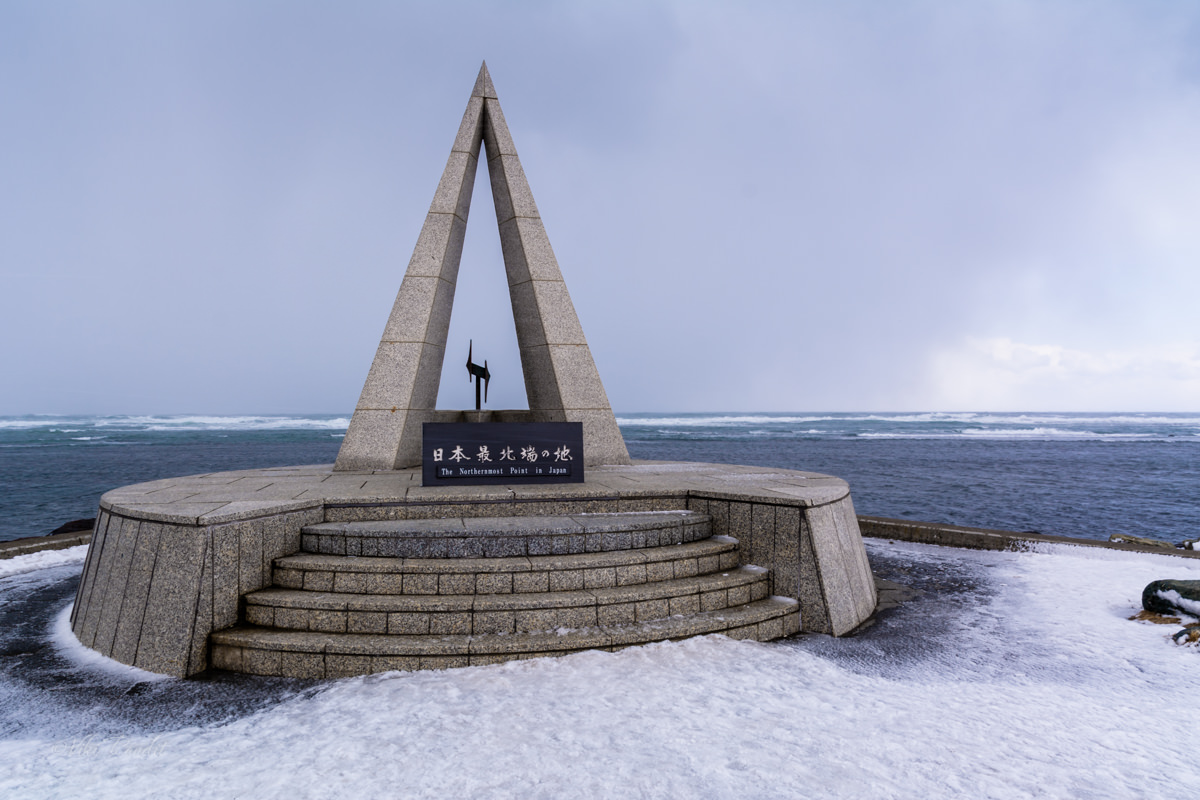 Cape Sōya in Wakkanai, at a northern latitude of 45 degrees 31′, is Japan’s northernmost point. It’s not one of those scenic landscapes that I chase after, but I was keen to visit the absolute tip of the island country.

We had a day’s rest in Asahikawa and were going over the plans for the next day’s trip to Wakkanai. Looking at the train schedules we felt it was going to be very tight for us to go all the way to Wakkanai and come back on the same day. Express trains are few, and local trains are not a very good idea for long distances. We both came to the same conclusion and decided to head for Wakkanai on this day itself. That would enable us to get an early morning start for the visit to Cape Sōya and then, we could head back to Asahikawa by the afternoon train.

I quickly booked us a room at Ana Hotel in Wakkanai. Lucky for us they had a last-minute deal going on.

After resting for a bit we went down to the Asahikawa Station to reserve our seats on the evening train. At the station, we took an early dinner and packed ourselves some tidbits for the way. Our train, the Sōya Express arrived at 7.17 pm. The train ride was uneventful. Heavy snow was predicted in the area for the evening and some villages along the way were buried in over 4 feet of snow.

It was almost midnight by the time we arrive at the port town of Wakkanai. The train was delayed by a few minutes due to snow on the tracks. The area outside the station was layered in a carpet of snow.

Hotel Ana is one of the more luxurious hotels in Wakkanai. We couldn’t miss it even if we wanted to. It’s the tallest building in town and also the closest hotel to the station. It took us just 5 minutes on foot to reach the hotel.

It was almost midnight when we reached Wakkanai. Thankfully we could see the hotel from the station.

Once we entered the hotel, I was pleasantly surprised by our lodgings. The interiors were fabulous. A fleet of stairs took us up to the second floor where an antique piano was sitting in the corner. This would be the most luxurious hotel, I have stayed in Japan.

The posh interiors of Hotel Ana. This is without doubt, the most luxurious hotel I have stayed in Japan

We were provided a room on the top floor. Our room was pretty huge with a wardrobe, mini-fridge, stacked beer et al. The room has a glass window wall facing the harbor. Snow was falling again. In the falling flakes, the Wakkanai coast looked beautiful. As I watched the waves hitting the coast, a fox came out of nowhere and went about investigating the area, probably searching for food. It was starting to snow heavily now.

We had planned on catching the sunrise bus at 5.45 am. I took a quick nap and woke up at 4 am. The snowing had stopped but the roads were still heavily snowed. We didn’t want to risk it, so we agreed to skip the early ride and go for the 11.04 am one. That would still give us enough time to get back and catch the afternoon Express train to Asahikawa. We checked out from the hotel at 9 am.

We walked to the station and bought our tickets for Cape Sōya. The round trip bus ride costs 2500 Yen per person. The station has a small cafe and souvenir store. We had a quick breakfast there. I bought a fox keychain remembering the fox I saw the night before.

The next bus wasn’t for an hour, so we walked towards the harbor. 5 mins from the station along the harbor, we reached a long arched hallway supported by Roman-style pillars. This Breakwater Dome was built in the 1930s. It rises over 13 meters up in the air to protect from the strong winds in the area.

We had some time to kill before the next bus, so we walked down to the harbor. The breakwater does an amazing job of stopping the heavy winds from hitting the town.

We walked along the hallway to the edge of the harbor where some ships were parked. Wakkanai is the last major town before you reach the tip of Japan. From here you can get a ferry to the nearby Japanese islands of Rishiri and Rebun. Hell, you can even catch one to Russia. It’s only 150 km from here.

Walking back Mani pointed out to me, the Monument of Peace on a nearby hill, built jointly by Japan and the United States to console the souls of war victims during the Pacific War (1941-1945).

We reached the bus stop a few minutes early.  It is located just beside the JR Wakkanai Station. The road signs were painted in Japanese, English, and also Russian. We caught the Souyamisaki bound Sōya Bus at 11.04 am. The clouds had disappeared as we rode the bus to Cape Sōya. It takes about 50 minutes to reach the cape. The road to Cape Sōya goes along the Sea of Okhotsk. The bus went slow, but we reached exactly on time. We were excited as the bus dropped us off at Souyamisaki. As we walked towards the cape the sun hid behind the grey clouds and the flurries were flying again.

So, there we were… at the northernmost tip of Japan! A stone monument of a triangular pyramid shape greeted us with the message “The Northernmost point in Japan” Beside the gray concrete triangle lies a bronze statue of Mamiya Rinzo (1780-1844) a Japanese explorer from the Edo period famous for his explorations and mapping of nearby Sakhalin Island.

The view of the wide sea from the cape is spectacular. It might mean nothing for some, but I felt a great sense of fulfillment by standing at the absolute tip of Japan.

Drift ice comes here every winter. Endless ice on the sea had impressed me greatly in some photos posted by friends on 500px. I was distraught about missing the drift ice in Abashiri. It was gone here too. I was saddened to hear we missed it by a mere week.

On a clear day, one can see the faint shoreline of Russia in the distance but the weather was too misty to spot anything beyond a couple of kilometers. Within minutes the wind was howling and flakes were hitting us at great speeds helped by the strong breeze from the ocean. The area went totally white, with nothing visible around us. The horizon disappeared completely. We felt lost. In the whiteout, I couldn’t make out any of the fellow travelers who had got down with us. My palms were going numb in the cold. The fleece in my pockets helped greatly to keep them warm. We went to the pyramid monument and stayed there for a few minutes.

Moments after we reached the monument at the cape, it began to snow heavily. The wind was so strong it was dragging me away. We took shelter in the pyramid for some time.

After some time the snowing stopped and I was able to take a few photos of the pyramid.

The snow let down for a brief moment and I was able to take a clean shot of the Monument | Credits: Ranita Saha

Across the road is the Peace Park up on the higher ground. From there one can get a higher vantage lookout to witness the convergence of the Sea of Okhotsk and the Sea of Japan. But it was impossible to reach due to the heavy snow. Around the monument, there wasn’t much to see, so we loitered around for some time. I went down to the sea to feel the cold water of the Okhotsk.

I had to feel the cold waters of Sea of Okhotsk. I couldn't do it in Abashiri, wouldn't miss it this time | Credits: Ranita Saha

Nearby you also find an old Naval Watchtower dating back to the conflicts over control of Sakhalin during the 1904 Russo-Japanese War. There’s a souvenir store nearby if you want to take something back from the tip of Japan.

It was already time for the return bus so we walked back to the stop. Beside the stop, there is also a beautiful shrine if you want to say a prayer.

On the way back I spotted some endangered Steller’s sea eagles flying by. We were a bit tense as we had just a 10-minute window to catch the train to Asahikawa. We reached the station on time. We quickly hopped onto the train, waiting on the platform. It’s was a long, scenic ride back. I was tired but the endless white snowed fields and blue skies kept me awake as the train chugged along the beautiful landscape. I am truly amazed, how the people of Japan have safeguarded the natural beauty of their country, especially Hokkaido. It surely is a heaven on Earth.

One thought on “Whiteout at Cape Soya” 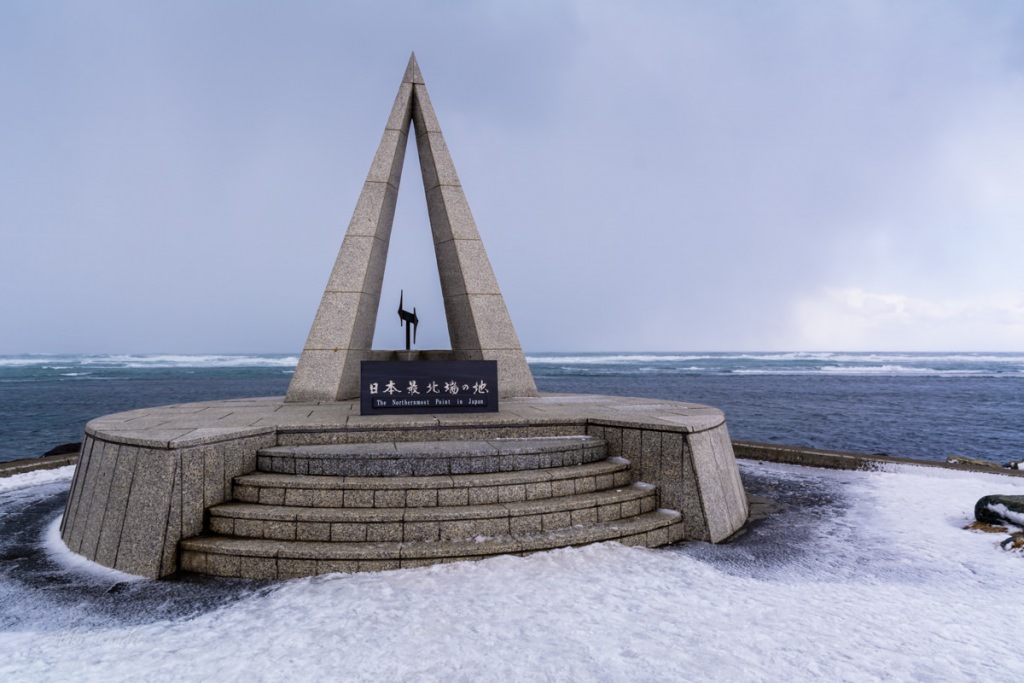