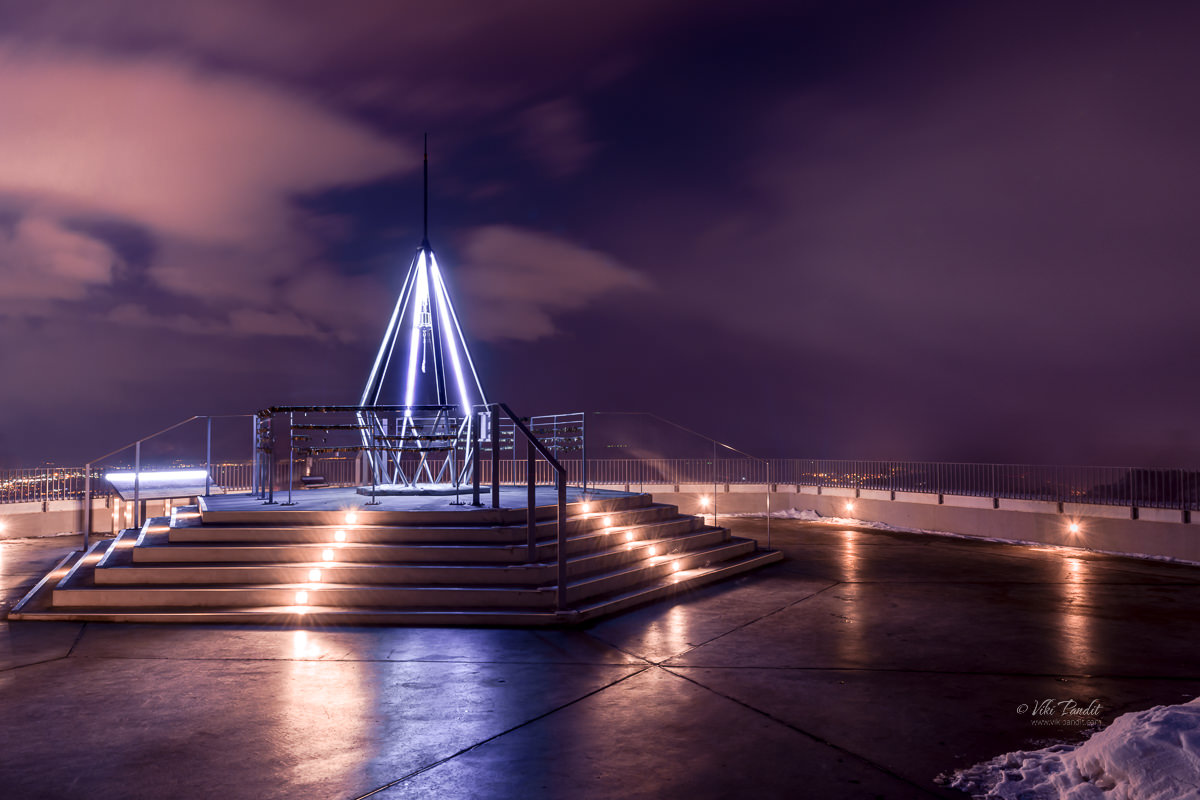 We woke up to a beautiful sunny day. The grey clouds from the day before had cleared up. It was the last day of our Hokkaido trip. We lazed around at the hotel discussing the amazing places we had been to on this trip. It wasn’t until noon that we left the hotel for Mount Moiwa.

How to reach Mount Moiwa

Mount Moiwa or Moiwa-yama (藻岩山) is one of several small, forested mountains southwest of Sapporo. The mountain is known for the spectacular view of the city from an observation deck at its summit. From here one can view a spectacular panorama of the streets of Sapporo, Ishikari Bay and the Shokanbetsu Peak.

We were staying at a hotel was near Nakajima-koen Park. From there, we took the subway to Odori Station. From Odori, the streetcar took us towards the Iriguchi Ropeway stop. The streetcar costs a fixed ￥170, wherever you are going. It keeps running in a loop and is very frequent. If you are catching the streetcar from Odori, note that you should catch the counter-clockwise loop. The clock-wise streetcar takes a longer time.

During our visit they were giving a discount coupon for the ropeway. One can obtain it at the tourist information counter, or pick it up in the streetcar itself, like we did.

A streetcar or shiden (市電) in Sapporo

From the Iriguchi Ropeway tram stop, there is a shuttle bus that leaves every 15 minutes. The ride on the shuttle bus is free. The bus took us right up to the entrance of the ropeway. It appears no one goes to this place in the daytime. We were the only couple on the shuttle.

We bought our tickets and waited at the lounge while the Gondola came down to pick us up. The tickets are priced at ￥1500 per person. The Mt. Moiwa Ropeway climbs from the base of the mountain to about three-quarters up the mountain to a transfer station. The Ropeway opened way back in 1958. It is around 1.2-kilometer long ride. Renovated in 2012, one ropeway cabin can hold about 60 people.

Going up Mt. Moiwa on the Gondola.

I was happy to see some other visitors at the base station. The gondola arrived soon. Its cabin has large glass sides and it was quite thrilling to see the wild forest and the city as we went up the snow covered mountain.

The Gondola on Mt. Moiwa

Halfway up Mount Moiwa, I noticed a Stupa. The bulbous white stupa is more of a peace memorial, like the ones we visited in Hiroshima and in Leh. The pagoda was built in 1959 by the Nipponzan-Myōhōji monks to commemorate peace after World War II, and supposedly contains some of the ashes of the Buddha that were presented to the Emperor of Japan by Prime Minister Nehru in 1954.

After a thrilling ride we found ourselves at the first base, also known as the Moiwa Chufuku Station. If you want to get some souvenirs, this is the place to get one. You can also get a lovely view of Sapporo city from here.

After a small wait at the transfer station, we had to change to the green colored “Moorisu Car” – a mini cable car, that took us rest of the way up to the Moiwa Sancho Station at the summit.

Both the transportation’s are unique and fun. The mini cable car is called Moorisu, named after the cute mascot of the mountain.

Riding the Maurice Car from the midway station

Mt. Moiwa, reaches an altitude of 531 meters. The original name of the mountain is “Inkarushibe” in the Ainu language and it was considered sacred by the Ainu. The mountain is home to some unique species such as the Ezo spruce and Moiwa linden trees. The mountain is a popular trekking destination during the summer weekends.

We reached the summit quite a bit before sunset. There is a Buddhist temple at the summit, but it was closed due to the heavy snow surrounding it.

The summit was much colder. The summit deck was empty with maybe 4-5 other visitors apart from us. I thought there would be more. It was refreshing breathing in the fresh air of the mountain. On the deck there is a unique structure known as Lovers Sanctuary. It features a bell at the center. Beside it you can find some padlocks hanging by the sides on the handrails.

It is said that if the lovers attach the love padlock (sold at the shop in midway stop) to the handrails around the sanctuary, and ring the bell together, happiness will follow them into their future.

Lovers Sanctuary on the observation deck at the summit of Mt. Moiwa where couples pledge their love for each other by attaching a padlock and ringing the bell.

It’s a wonderful sight from the summit. On one side I could see the sprawling city of Sapporo and on the other side an amazing the panoramic views of Ishikari Plain and far mountains.

The city of Sapporo is surrounded by many mountains. Towards the southeast, one can see the Yakiyama mountain in a distance. Skiing is a favourite past-time of locals in winter. Not surprising for a city where snow covers the ground 133 days a year. For the skiing enthusiasts, the Mount Moiwa Ski Resort lies on the mountain’s southeastern slope.

Note: it is approached from a different direction than the Mount Moiwa Ropeway.

I walked around in a circle around the observation deck, clicking photos of the beautiful scenery surrounding the mountain-top. Below you can see the Mount Kannoniwa on the eastern side of Sapporo.

As I came around the full circle. the lights had started to glitter over the city of Sapporo. Until the end of the Edo Period (1603–1868), Sapporo used to be a trading post between the Japanese mainland and the local Ainu population. There are various theories on the origin of the word “Sapporo.” The leading theory is that it derives from the Ainu (indigenous people of Japan) words “Sap (Dry) – Poro (Wide).”

As dusk approaches, the city of Sapporo begins to light up

The ski slopes on the far south at Fu’s Snow Area were also lit up. Fu’s is a small ski resort in the Fujino district with a range of trails, camps & lessons, a simple restaurant & lifts to the peak. During certain times of the winter, night skiing is also allowed on these slopes.

Gradually the sun set behind the mountains and the city started to come alive, twinkling like countless diamonds floating on a dark sea. On the other side the ski slopes near Mount Yaki were lit up like a flash-fire.

Occasionally flying flurries would start to hit our unprotected faces. The temperature was beginning to drop fast and we were freezing. Mani got us a cup of hot coffee from the vending machine inside the deck and it felt like I held heaven between my palms.

Mt. Moiwa is one of the Hokkaido’s top three night views, along with Mt. Hakodate and Mt. Tengu. We didn’t have time for Mt. Tengu in Otaru, the day before, so it was really nice to catch this one on Mt. Moiwa.

As the sun set, large groups of tourists started pouring in. It turned into a huge gathering in a few minutes. With the crowd came a team of video bloggers. They set up their big lights and cameras and blocked everyone. It was quite frustrating as they overran every photogenic spot at the summit.

We stayed back until darkness set in. It was getting more and more crowded with every passing minute. Our heavy jackets were barely holding up to the cold. I took a last shot of the structure and then we headed back to the base.

The love sanctuary on top of Mt. Moiwa where you can place a lock to secure your love. Beware it gets very cold at the summit in winter.

The ride back downhill on the Gondola, felt like sinking into a sea of twinkling stars.

Sapporo nightscape is one the best night views in Japan. The others being Nagasaki and Kobe.

Being the last night of my Hokkaido trip, I felt deeply reluctant to admit that it was ending so soon. Hokkaido is really beautiful and a place to experience different things in each season. I’ll be back, I hope. Don’t know when, but definitely I will be back!!!

Thanks for reading. Please leave me a comment if you liked the post or follow my story as I visit the lovely temple of Hase-dera in Nara. If you want to check out more night views of Japan, here’s the night-view of Hakodate and night-view of Yokohama.

*Closed from November 21 – 30 for annual maintenance. 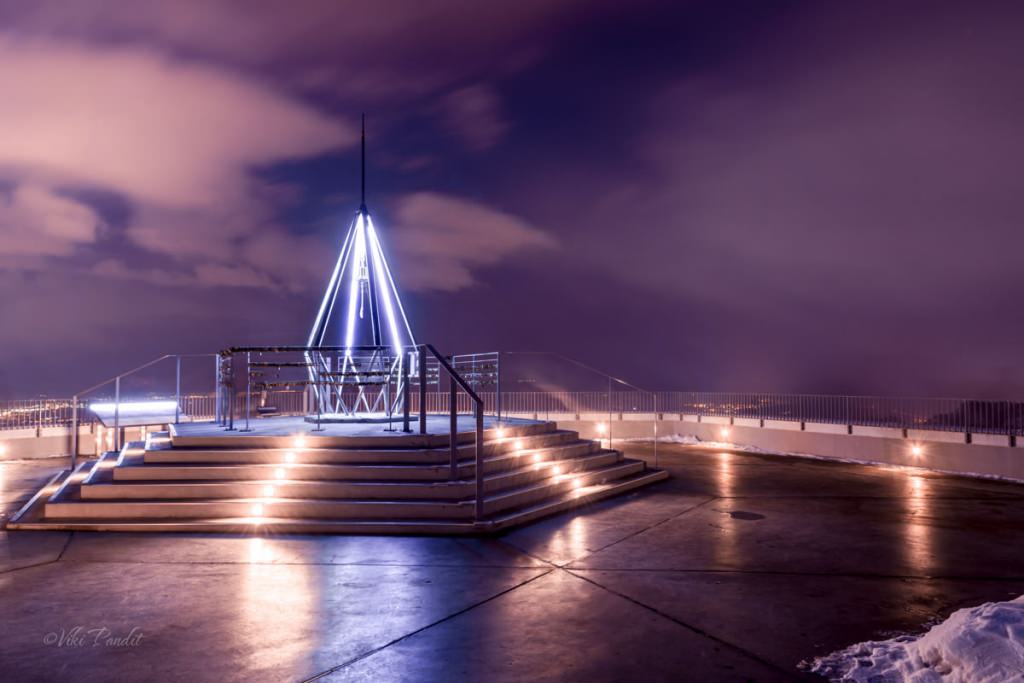 Places to see near Sapporo-shi