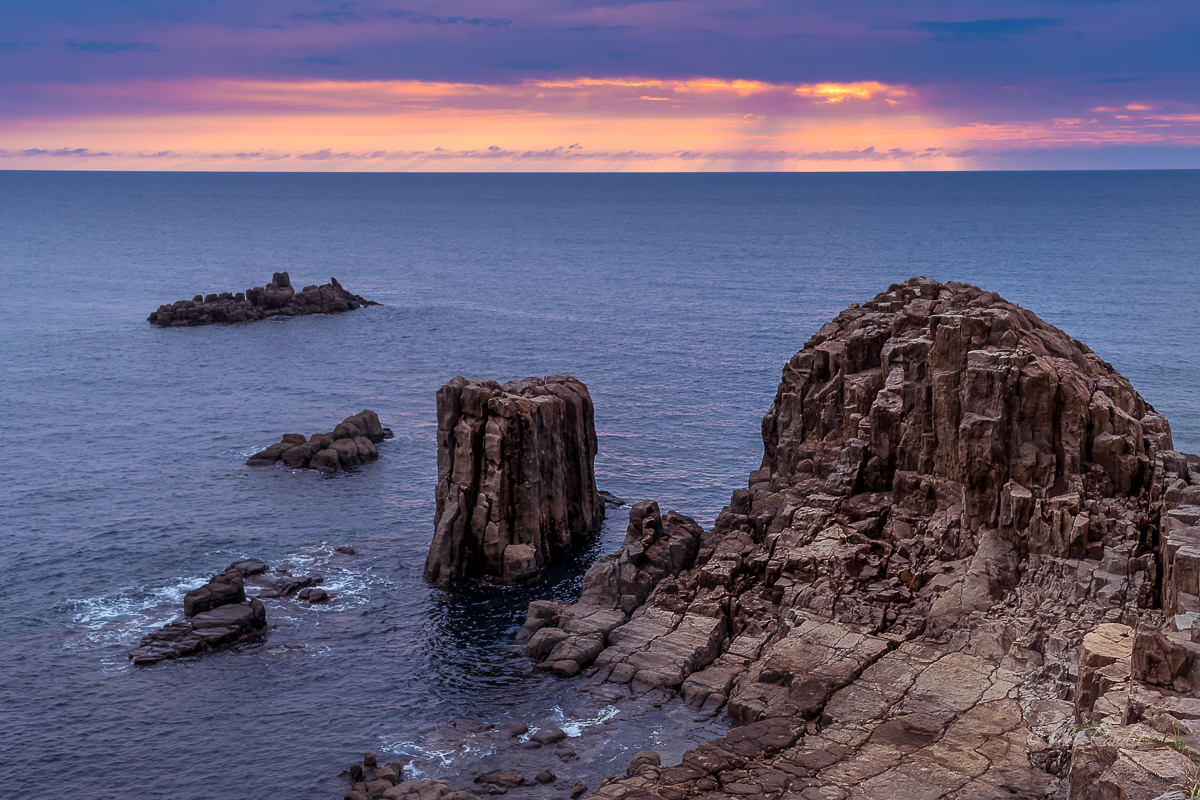 This day is special to me, today I can safely proclaim to be the second Indian to visit all 47 prefectures of Japan. The first Indian to explore all 47 prefectures is obviously my wife Mani san. I had been wanting to visit the cliffs since the day I witnessed the thrilling cliffs of Sandanbeki in Wakayama. My JR Pass was going to expire soon, so I made up my mind to drop in at Tojinbo today.

Tojinbo is a series of basaltic cliffs located within the Echizen-Kaga Quasi-National Park in Sakai, northern Fukui, bordering Ishikawa. Pronounced Toujinbou, the rugged, precipitous cliffs stretch for over a kilometer, and is designated as a precious natural monument.

I was a bit tired traveling more than 2000 km in the last couple of days. From Nara, it was a leisurely 40 minute ride to Kyoto. The trees on the hills along the route had started turning red with the advent of fall.

Getting on the Thunderbird Limited Express at Kyoto

The train ride to Fukui goes along a hilly region and for most part of the journey we were traveling inside tunnels. It had started to rain strongly and I was keeping my fingers crossed hoping for a better weather at Fukui.

It was raining heavily as I approached Fukui

I reached Fukui at 1 pm. The weather here was much better. The tourist information booth had been shifted to a new place because of renovations. It took me a bit of time searching for the relocated office. Once I was there, the lady at the counter told me to catch the train to Awaraonsen Station and take a bus from there. There is another way using the Echizentetsudo-Mikuni-Awara Line to Mikuniminato Station, but it’s not a JR line. Both routes cost similar and take up almost similar time but I chose to go to Awaraonsen as it was a more preferred route.

The bus for Tojinbo leaves every hour so I had to kill some time at the station. I wandered around the place but its a small town with nothing interesting around the station. There is a Seven-Eleven store inside the station premises, and that’s it.

Waiting for Bus to Tojinbo Cliffs

The bus arrived at 2.40 pm. The cliffs are popular with foreigners and the bus stops are announced in English as well as Japanese.

It was about 3.30 pm by the time I reached the Tojinbo bus stop. The cliffs are at a 5 minute walk from the bus stop.

It was a breezy evening as I walked along the cobblestone path towards the cliffs. The path is lined on both sides by many omiyage (souvenir) shops and restaurants. The restaurants serve some delicious baked seafood in the restaurants. One can also enjoy the Squid Ink Ice cream, a specialty found only in the Tojinbo area.

At the end of the path, the view opens up to the wide Japan Sea. Some wooden benches are set up here so the less adventurous guests can enjoy the breathtaking scenery right from here.

My first thoughts were that it was somewhat smaller than the Sandanbeki Cliffs but more widespread. I climbed down towards one of the protruding cliffs. The rocks in Tojinbo are named from their shapes such as Sandan Rocks (three-layer rocks), Rosoku Rocks (candle rocks), Byobu Rocks (wind wall rocks), and Oike (big lake).

The rocks are easy to maneuver through. I found myself a comfortable spot at the edge of the 25-meter-tall cliff near the Oike. These magnificent andesite rocks appear like hexagonal pillars growing out of the sea.

In between a boat would come inside the lagoon called Tojinbo Oike, carrying tourists wishing to explore the magnificent rocks from the sea. Far away, I noticed the Oshima Island and the red bridge leading to the island. There is a cruise service available, which takes about 30 min to commute between Tojinbo and Oshima. Oshima is one of the biggest islands in the Echizen coast.

I spent around an hour lost in the beautiful moment from the edge of the cliff looking into the vast vividly blue-green sea. In winter one can observe a phenomenon called “Nami-no-hana,” or flowers of waves. They occur when the waves are caught in the reefs and churn into bubbles that the violent winds then fan up in to the air. I had seen those at Sendanbaki, but today the waves were at peace. Eroded by the raging waves, the sea had made inroads along the coast creating small caves.

There were so many tourists walking up and down the steep rugged cliffs, enjoying the spectacular scenery. Some were extremely adventurous, venturing to the edges. I captured this photo of a girl looking down the cliffs.

For some reason I felt something was wrong about her. She went further down towards a lonely side of the cliff and sat down at the very edge. I could tell she was crying. She sat there listening to something on her phone.

Tojinbo cliffs also have a dark side – many Japanese come here each year to end their lives by jumping off the high cliffs, throwing themselves onto the jagged rocks.

Local legend has it that Tojinbo, a Buddhist monk was pushed out off the cliff to death by his fellow monks because of misbehavior. His angry spirit didn’t leave the sea and it had always been incredibly stormy on the day of his death that falls on 5th April. Every year his spirit is soothed by the prayers of a master monk so the waves subside. It is said his ghostly spirit has been drawing many depressed souls to commit suicide from these cliffs.

I hung around beside her for about 30 min after which she, to my relief, got up and went back towards the shops area.

The sun was gradually descending by 5.30 pm. Far away a fishing boat was sailing in the glittering waters.

A fishing boat out in the Japan Sea

I went down towards the east side where a series of steps led right down to the base of the cliffs.

I felt the cold water of the Japan Sea in my hands. In monsoon the waves at Tojinbo are more dramatic. From down there, I was awed by the surreal and eerie look of the cliffs with its gigantic columnar joint of basalt.

From the base of the cliffs I took some shots of the sea with the sun gradually descending behind thick clouds.

I wanted to catch the sunset, but unfortunately my last bus back was scheduled for 6.21 pm so I had to leave before the sun actually set. The bus stop was desolate. The bus arrived on time. It was carrying a couple of passengers. On the ride back, luckily, I was able to catch a glimpse of the sunset from the bus.

I reached Awaraonsen only to find the next Thunderbird express to Kyoto was an hour away. So I caught another train and went to Fukui. I grabbed some snacks at the station and waited for the train there. In a couple of hours I was back in Nara.

Tojinbo is a beautiful place with spectacular cliffs. It’s a great place to relax and witness the sunset. I had a wonderful time hiking up the cliff. It is sad to hear about suicides though. 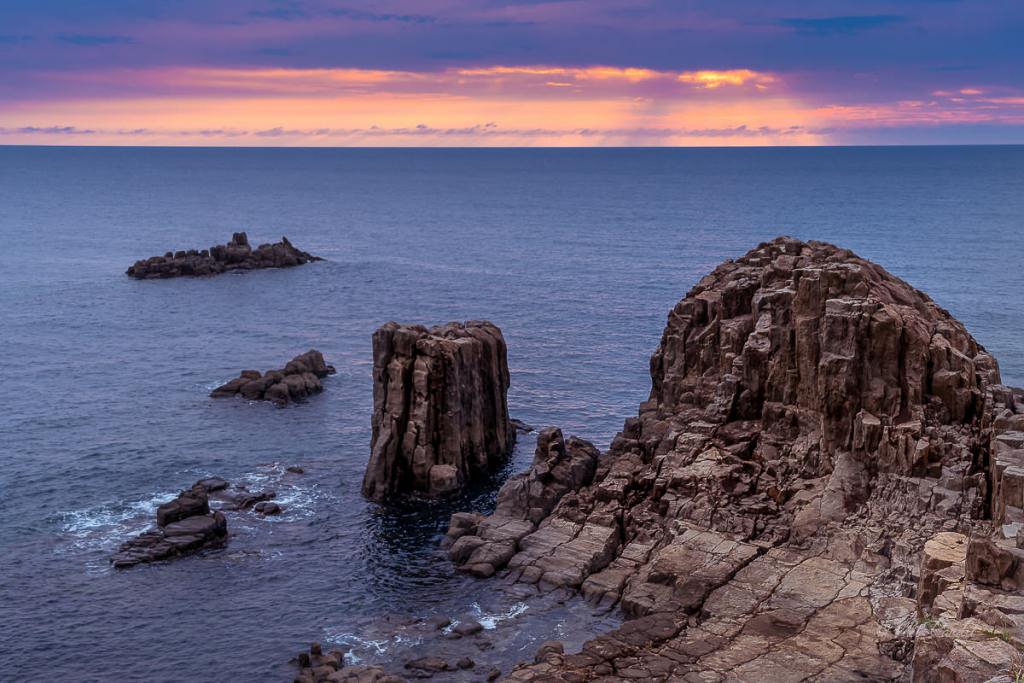 Places to see near Tōjinbō Cliffs