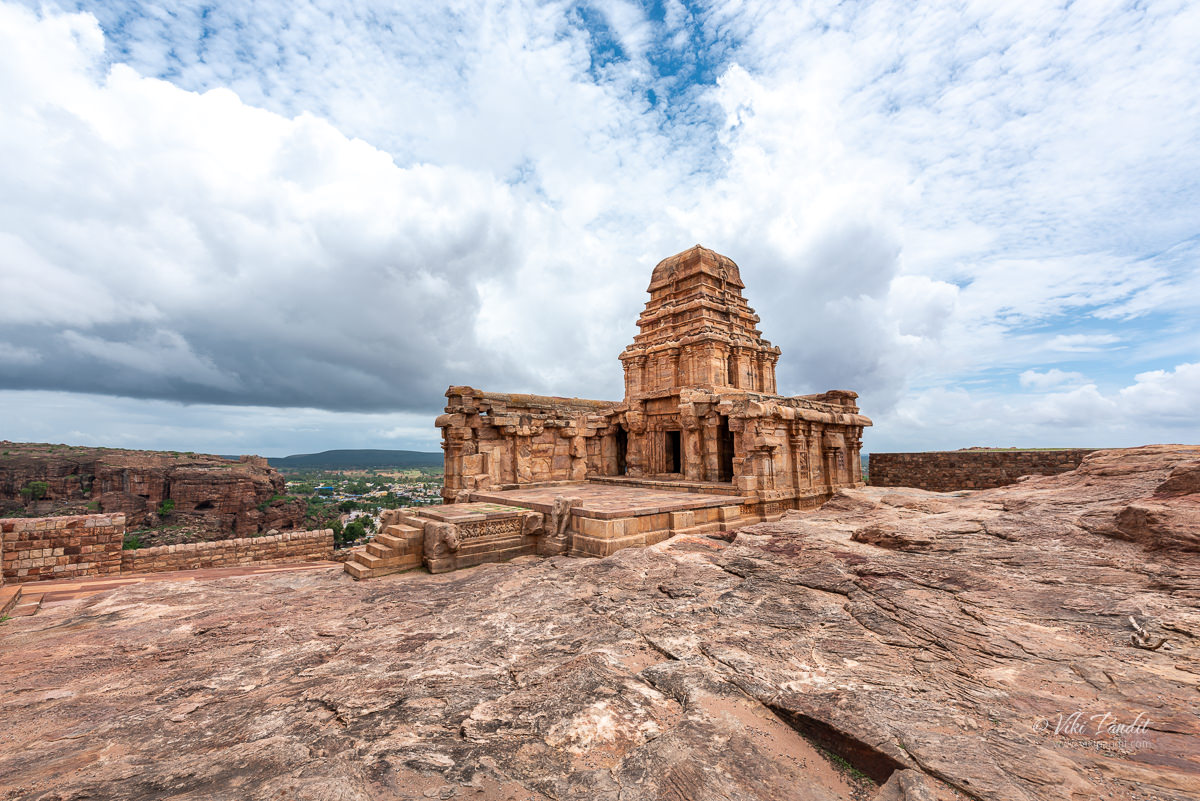 Today we hike to the Shivalayas of Badami. These shivalayas dedicated to the Hindu deity Shiva are surprisingly located inside a fort protected with canons et al. However the most intriguing thing that I saw were some uniquely dome-shaped stone granaries, never seen before in my travels across India.

The hill hosting Upper and Lower Shivalaya in Badami

Badami was the regal capital of the Badami Chalukyas from 540 to 757 CE. It is located in a ravine at the foot of a rugged, red sandstone outcrop that surrounds a man-made Agastya lake.

The road to the ASI protected hill goes through a massive slum area. I was naive to take my Brezza up that path, where there not even space for two cars to pass through. I would also not recommend walking to it as it goes through some really dingy areas. Hiring a local tuktuk would be the best option.

Once you breach the ASI gates, you will be transferred into a much cleaner and peaceful place. The Shivalayas are located up a hill which also used to double up as a fortress.

Near the entrance you ca see the remnants of the walls of the fortress in some places.

Base of Badami Fort

The walls extend towards the back of the hill.

Fort walls towards the Base of the Badami Hill

There is no parking lot in front of the entrance to the hill, so we just left it in front of the Gate. This part of the hill does not require any admission tickets. Just beside the path up the hill lies a small museum that exhibits some of the idols and carvings that needed to be protected. The museum requires a ticket to enter. Outside the museum many stone artifacts are lying out in the open.

Entreance to the fort at Badami. The path leads to Upper and Lower Shivalayas

This is the first gate we encountered. This gate stays open from 6 am to 6 pm.

Entrance to Shivalaya in Badami

From here a series of stone steps take up up the hill into an open space. The massive boulders surrounding you will make you feel overwhelmed.

We gradually made our way towards the boulders. The red patterns on the rock faces make them even more interesting.

Massive Boulders leading up to Lower Shivalaya in Badami

Beyond the boulders we found ourselves in front of a small gate. Sandwiched between two huge boulders, the doors has some carvings on it.

Gate to the Lower Shivalaya in Badami

Below is an image of the back side of the same gate, which is quite bland.

A gate leading to the Lower Shivalaya in Badami

Beyond the door the path forks into two. One the left lies the Lower Shivalaya and on the right a path that takes you to Upper Shivalaya. At the fork, there lies a ruined rubble structure that looks like some kind of hall consisting of two long chambers, created out of small rocks bound together by something resembling cement. Most likely these chambers were used as an armory or a store.

A ruined structure inside Badami Fort

We took the left towards Lower Shivalaya. The boulders gave way to an open area where at the edge lay a small temple. Inside the temple lies a Shivalinga. There are no ventilation in the temple and the Shivalinga lies in darkness.

Going across to the other side, I found an age-old cannon bearing an engraved date of 1550, pointing towards the city. The cannon reminded me that this hill also used to be a fort.

Only the towered sanctuary of the temple exists today; its outer walls have been dismantled. The sanctuary was originally surrounded by a passageway on three sides, possibly with a mandapa extension to the east which can be predicted by observing the broken roof slabs set into its walls and the stumps of beans with friezes of ganas.

The temple’s doorway is framed by bands of lotus ornament. An unusual, elliptical shaped pedestal is seen within which happens to be empty now. The outer walls have flat pilasters but there are no signs of projections or sculptures niche. The roof is an octagon to dome topped by a tiny amalaka finial. It is framed by corner model elements topped by kuta roofs containing miniature nidhis.

From here if you look north, you can view the upper Shivalaya in a distance.

After taking a short break at the Lower Shivalaya, we started on our hike to the Upper Shivalaya. Along the way you can find many interesting boulders like this.

In a few minutes we were at the third gate. Unlike the second gate, this does not feature any artistic figures.

The way to Upper Shivalaya in Badami

From the gate a series to steep stairs took up up the hill.

Unlike the Cave Temple in Badami, this part of the hill is mostly desolate. We kept making our way to wards the top. In a few minutes we found ourselves at another fork in the path.

A fork in the trail leading to Upper Shivalaya

We took the left stairs that well a little bit downhill. It led us into an opening with a cylindrical structure. This used to be a Bastion of the old Fort, jutting out over the edge of the cliff. The bastion is bounded by finished walls with angled ramparts provided with apertures for cannons.

After spending a few minutes inside the Bastion, we moved on towards summit. The boulders in this area are so close to each other that the passage becomes very narrow.

The bastion of Badami Fort

Eventually it narrows down so much that only one person can pass thru it at a time.

After some time we reached the fourth and final gate.

The Gate leading to Upper Shivalaya in Badami

The narrow path continues beyond the gate.

Narrow sections leading to the Upper Shivalaya in Badami

In a few minutes along this narrow path we entered a clearing containing two oval shaped structures beside a ruined third. These structures we used as granaries in ancient time. Built on finely finished bases with a small single doorway, the rubble walls have projecting stone pieces that serve as steps to the summit.

The ruined granary provides a better view of how the base features on the inside.

Granaries inside the Fort in Badami

From here we moved towards Upper Shivalaya.

We were finally at the summit of the North Fort. The hike took us around a couple of hours at a leisurely pace. At the summit the first structure we saw was a building in ruins. This ruined building with a spacious court surrounded by a number of chambers was most likely used as residential quarters for a garrison.

Ruins of a palatial building at the summit of Badami Fort

Just beyond the ruins, lay the Upper Shivalaya. The temple faces east and is the highest point of the fort.

First glimpse of the Upper Shivalaya in Badami

In front of the Upper Shivalaya, you can find a small natural pond. Its prominent location and rudimentary Dravida style of it architecture suggests that it is one of the earliest structures in Badami.

A natural pond near Upper Shivalaya in Badami

The outer walls of the temple create a rectangle containing a sanctuary with a passageway on three sides, opens into a columned mandapa on the east, missing all its internal columns. The walls are built on a basement with a central recessed course containing foliate ornament and narrative scenes.

I captured some close up shots of the outer walls of the temple. On the south face, Ramayana episodes are pictured, like, waking of Kumbhakarna, Rama fighting with forest enemies. Panels on the west face depict the birth and childhood of Lord Krishna, including Krishna sucking Putana’s breasts.

Outer wall carvings on the Upper Shivalaya in Badami

Front of Upper Shivalaya in Badami

From the edge of the temple you can also see the lower Shivalaya.

Lower Shiyavalay as seen from the summit of Badami Fort Hill

We spent some time admiring the beautiful view from the summit as a huge cloud surrounded the area.

City of Badami from the summit of the Fort

I took a last shot of the Upper Shivalaya before we started on our way down the hill. Both these appear to have partly dismantled mostly by conquering pallava forces; and maybe they have been pillaged for building blocks to strengthen north fort by later occupiers.

Thanks for reading. I look forward to your comments and questions. If you are looking to explore more of the Badami region, follow my story as I visit the UNESCO site of Group of Monuments in Pattadakal. 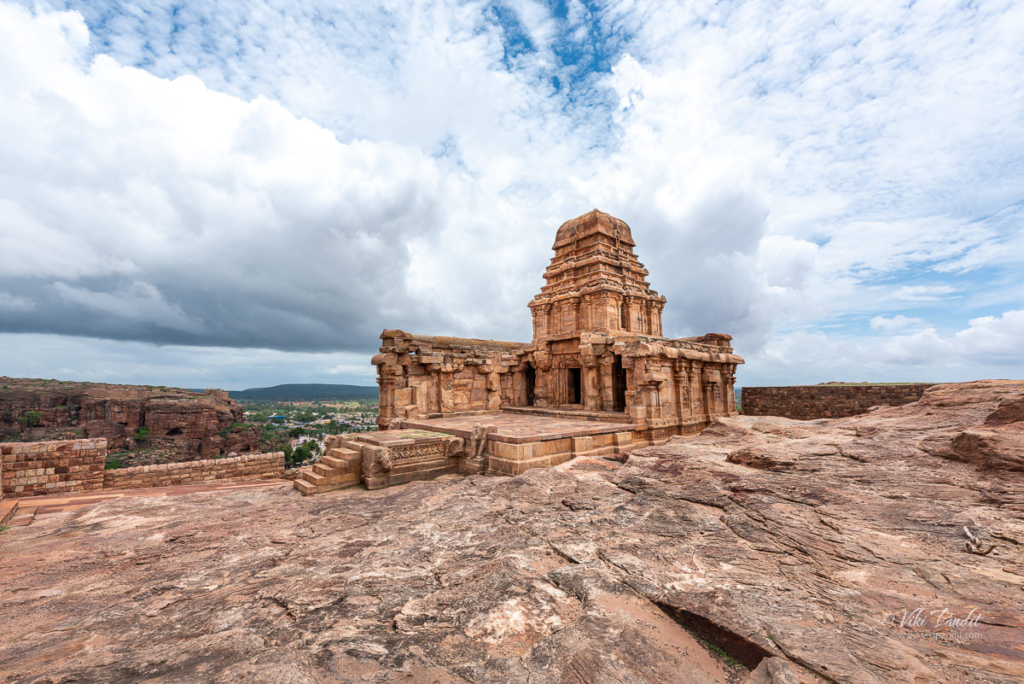 Places to see near Badami