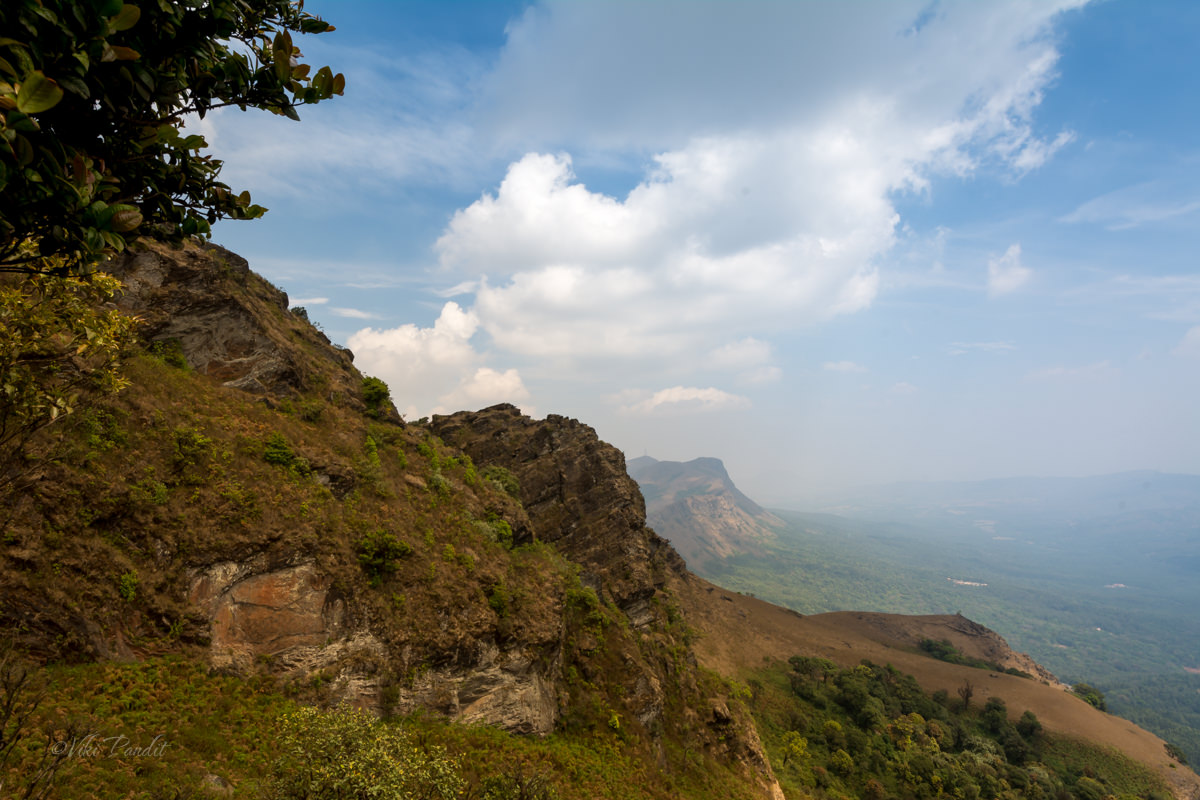 In my search for peace in the wilderness, I was finally able to force some time out from my work schedule, to go on the trek to Mullayanagiri, the highest peak in Karnataka. I had been planning this trek for some time. In fact, I was all set for this trek in November 2014 but had to cancel it at the last minute.

Mullayanagiri is located in Chikmagalur, Karnataka, some 280 km away from Bangalore. With the Bhadra Wildlife Sanctuary only 15 km away, the area is rich in vegetation and varied wildlife.

We started from Bangalore late in the night at around 11 p.m. The travel time to Mullayanagiri is around 4 hours. At the base of Mullayanagiri, there is a wildlife outpost. It was early dawn and since the wild animals use the area as a thoroughfare, we had to stop there for over an hour. A handful of us strolled around for the time the bus waited. It was still dark. The guards at the check-post had lit a bonfire, that kept us warm for some time. By 6.00 am, one of the dhaba (eatery) had opened up. I and a couple of the trekkers took an early breakfast of coffee and omelets.

Once the check-post opened, we drove up the hilly area. The vibrant sun rose from behind the strips of the cloud. That sunrise is still etched in my mind as the sky soon became a painters canvas.

By 8 a.m. we were at our home-stay. It was a nice, quaint place in the woods. I could hear the sound of water cascading from a tiny spring nearby. From our cottage, I could see a few exotic birds. I went for a walk taking pictures of some birds. I now understand 400 mm is still way short for birding. Maybe I should invest in a teleconverter.

The Trek to Mullayanagiri Peak

After a quick freshening up and breakfast of Idli, we started on our trek to the Mullayanagiri peak.

The bus drove us to the starting point of the trek. We started the ascent at around 10 a.m. A few minutes into the trek one of the guys, Ravi started feeling sick. We waited for some time but eventually when he did not recover, we had to send him back to the cottage with one of our trek guides. The climb is steep and it was tough with my camera backpack. After climbing for about a couple of hours, we passed a big rock that looked totally like a human face.

After the first hour of climb, the trek becomes relatively easier as we move into the flatter area. At the top, the hills are smooth like meadows. I must say these meadows would look amazing after monsoons when green grass would cover the whole mountain like a carpet.

After hiking through the meadows we reached a cave. I had developed some cramps in my right thigh so I took some rest here. Hydrating oneself is very important on a trek. Not only on the trek, one should hydrate the body from before a couple of days before the trek.

There was a lot of moss on the walls of the cave. At places where the rocks were visible, one could make out the lines dripping water had created.

The sparkling moss in the cave

From the cave, after a bit of hiking, we finally reached the peak.  Mullayanagiri is part of the Baba Budangiri Hill Ranges and it’s amazing to look at from the peak. I found myself in front of a small temple dedicated to Lord Shiva on top of the hill. The small hillock inside the temple premises is the highest point in Karnataka. The front was still clean, but it was very dirty and smelly overall. We went a few steps down where it was comparatively cleaner and decided to have lunch there.

After lunch, we got back on the trail. The descent from here was relatively easy.

The trail becomes a bit steep as we neared the end of our hike. The bus was already waiting for us at the base. We hopped in and on popular demand from the group, headed towards the Dabdabbe waterfalls. I decided to wait for the bus, opting to save my energy for the next day.

Back at the cottage, we freshened up. Some guys started a game of cards. I went for a walk down the road. it was pitch black just a few meters beyond the cottage. I gathered some courage and kept going for about half a kilometer, eventually, I turned back. I wasn’t able to make a call through my phone. The person who owns/runs the place lent me his phone. He is a nice chap. Talks very humbly. I am going to put his phone number in the FAQs below if anyone needs to contact him for home-stay.

Dinner was served at 9 p.m. We had rice and sambar. After dinner, we gathered some wood from the surroundings and started a bonfire starting at around 11 p.m. An alien theory was proposed by one of the trekkers, Altanai, who refuses to acknowledge the theory of Evolution. Our discussion gradually moved on from fantasy to more acceptable on philosophical lines. Eventually, I went to sleep at around 1 am.

I rose up early, washed up, brushed, and went for a walk towards the bushes, where I had spotted some Bulbuls the day before. I waited for a long time patiently eventually a few of them showed up. I was able to get a few shots.

I had noticed the Ridge, the day before and it looked overwhelming, so I decided to leave my camera gear behind and concentrate on the climb instead. The ridge walk is not allowed without permission. It’s a steep climb over edgy rocks but not difficult. At certain points, it’s steep and very narrow, but the rocks make it easy to grab and climb. Without the heavy Camera bag, I was feeling a lot free. For the first time, I was actually leading the trek.

The rocky climb lasted for about an hour, thereafter we hit the meadows again.

So that's what it looks like to be at the front of the trek..

After a couple of hours, we could see the BSNL tower. From there we walked along a steep ridge. It was dangerous and thrilling at the same time. Looking on the right towards the abyss made my head go round. So I just kept my head down and eyes on the trail and kept walking.

The last bit of the ridge walk is very precarious, not recommended for people with vertigo

It would have been safer to use trekking poles in such unsafe areas. One slip can actually turn out to be fatal. We reached the end of our walk at around 12 p.m. We went back to the cottage to have lunch there. On reaching, I went and collected my camera backpack. After a hearty lunch, we headed back to Bangalore.

One the last couple of treks, I felt the focus of the treks had shifted to making noise, jumping around, and taking “flying photos” for obtaining likes on social media. It certainly depends on the group of people going on each time. I had really enjoyed the earlier treks I went to last year. Even the group that went to Gokarna was fun. At one point on the trek, some of us had to wait for an hour while others in the group went for a photo session. Not everyone enjoys nature in the same way. I am strongly feeling the need to go solo if I want to truly enjoy nature in peace.

One of my daredevil Trek buddies

On the way, we stopped at Chikmagalur for some refreshments. I was feeling dehydrated so I grabbed a Pepsi. From my window seat, I kept watching the fields passing by. I love to stare at nature, it pleases me, like an ecstasy drug. We reached Silk Board stop at 9 pm and in another 30 minutes I was back at home.

Mullayanagiri is not for the faint-hearted, especially the ridge walk. The trek to the peak is easy to moderate difficulty. I would suggest keeping yourself as light as possible. It was a mistake on my part to take extra lenses on the trek and it weighed heavily on my first day of the ascent. The meadows are excellent especially when you go on the ridge walk, however, note ridge walk is quite a bit on the dangerous side and should not be challenged in the monsoon season.

Do you have the homestay details?

Eco Holiday Home. The homestay is located on Baba Budangiri Hills. They provide rooms, tents as well as the Cottage where I stayed. The name of the contact person is Aman. His contact number is +91 9481 365 565
Disclaimer: I loved the homestay. Bathrooms were clean and the food was tasty, but I do not accept any responsibility if you use their services.

Are there other any interesting places around Mullayanagiri?

If you are visiting Mullayanagiri, you could also plan a visit to the Bhadra Wildlife Sanctuary. It is only 15 km away

What is the best time for trekking to Mullayanagiri?

Mullayanagiri is pleasant after the monsoons. The lush green meadows are a sight to behold. Although trekking during that time has its disadvantages. Leeches are everywhere. The mist decreases the visibility substantially 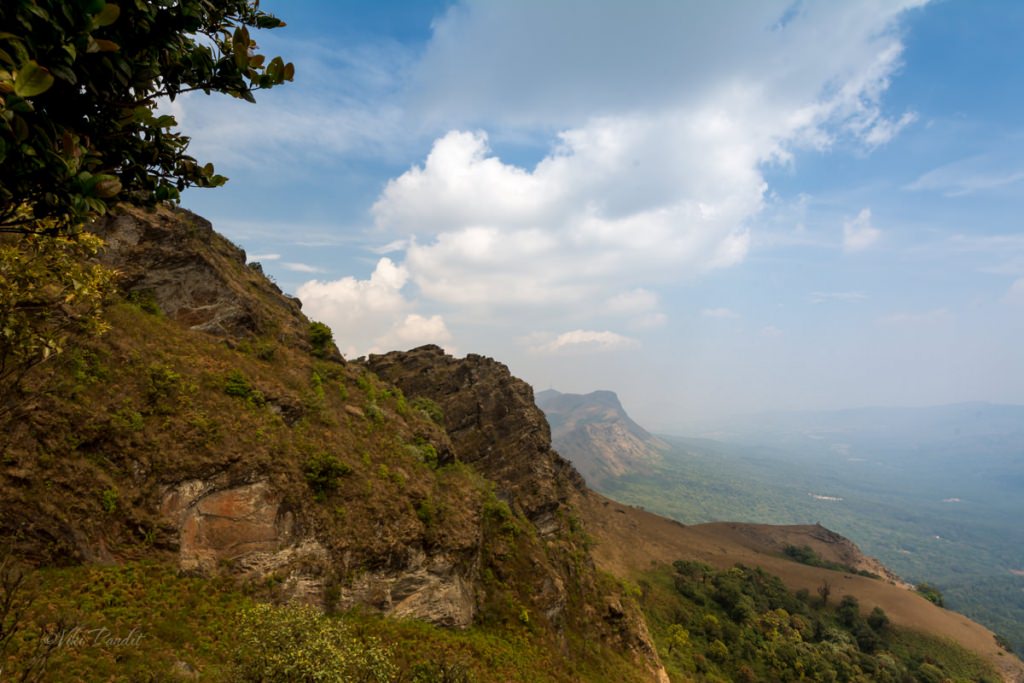 Places to see near Mullayanagiri