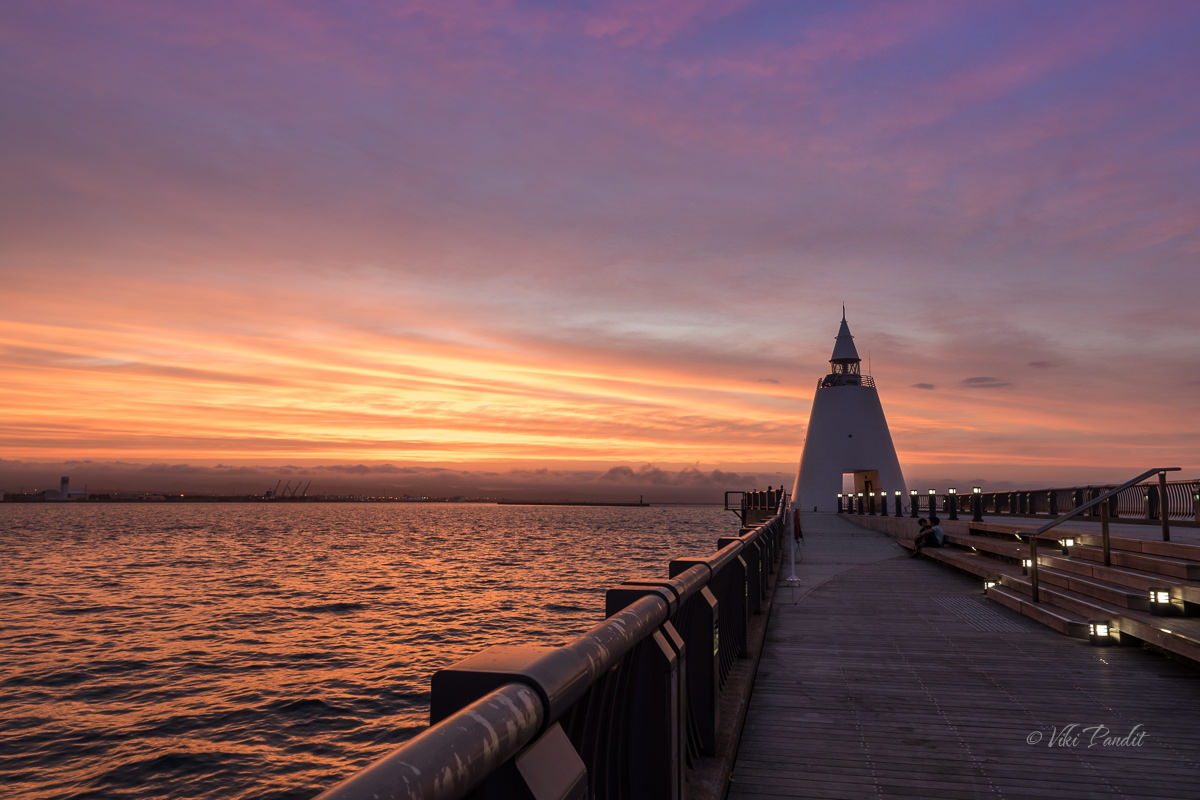 There are days and there are Days. Today was one such day of days or more realistically, evening. We were treated to one of the most memorable sunsets of our lives at Aomori Bay.

It was 4.30 pm by the time we arrived back to Aomori Station from our somewhat educational trip to the ruins of Sannai-Maruyama.

We walked back to the APA Hotel where we were staying for the duration of our trip in Aomori. We got refreshed and then ventured out for a walk along Aomori Bay.

Aomori is the northernmost prefecture of the Honshu, the main island of Japan. Surrounded by the Tsugaru Peninsula in the west, the Shimokita Peninsula in the northeast, and the Natsudomari Peninsula in the east, Aomori Port provides a tranquility similar to the beautiful Osaka Bay. Aomori City is among Japan’s most pleasant towns in the summer. We were just coming form Yamagata and let me tell you, it was hot there. The cool sea breeze blows in from the bay, and the city’s inhabitants are treated to clear blue skies during the days, and striking sunsets in the evenings.

Aomori first became a port in 1624, when the second Tsugaru lord, Tsugaru Nobuhira, bestowed the name “Aomori” on the small fishing village of Utō. Soon, it was developed as a commercial port. The Tōhoku rail line was opened in 1892, followed by the local Ōu rail line 3 years later and it brought rapid developments to the city. During the Second World War in July 1945, Aomori was heavily bombed during air raids, destroying most of the city. As a result of this destruction, one can find mostly modern buildings around the city.

From the Hotel, we walked down to the Aomori Prefecture Sightseeing Products Mansion. The ASPAM building (Aomori Prefecture Sightseeing Products Mansion) is the most recognizable landmark of Aomori. The triangular building fashioned into an “A” of “Aomori” houses many shops and restaurants selling Aomori’s signature agricultural products and specialty goods. The instantly recognizable, 76m-tall A-shaped tower also houses a tourist information desk, gift shops, and an observation deck which offers spectacular views of the bay.

We walked around the ground floor where many shops were selling traditional art crafts as well as sweets made from apple. Mani purchased an Apple pie box for later. If you’ve ever wanted apple jam, baked apple, apple pastries, apple ice-cream, or indeed anything apple-flavored you can think of, then chances are the ASPAM building is where you’ll find it. Aomori Prefecture is known for its production of apples, so be sure to sample some when you are in the city. I promise you will never forget that taste. Towards the upper floors, the facility has a panorama movie theater, observation deck and restaurants with great view and local cuisine.

The 13th floor observatory has a stunning 360 degree panoramic view of Aomori city, Mt. Hakkōda, and Mutsu Bay. However it was almost closing time and we wanted to take a lazy stroll along the bay.

From the ASPAM building, we walked towards the bay through the Blue Ocean Park. This park is considered the best location for gazing at the sea. It has many benches overlooking the bay, so visitors can sit and enjoy the vast ocean while the sea breeze gently blows by.

We slowly made our way along the central pier. The promenade breakwater was developed and opened to the public in April 2004. This breakwater is 310 meter in length and people can enjoy a relaxing walk by the water.

After a short walk we reached the West Lighthouse. The West Lighthouse is unlike any lighthouse I have seen before. The round, white, broadly conical tower with a lantern has a sharply peaked roof that continues the conical profile of the structure.

Surface of the breakwater is made of wood and natural stones. The benches and observation decks are provided at the central parts of the breakwater. This unusual lighthouse is a landmark in Aomori harbor. There is some confusion over its name. Its Japanese name translates to “breakwater west lighthouse,” however the National Geospatial-Intelligence lists it as “north breakwater, north head.”

We were sitting at one of the benches near the lighthouse when the magic started to happen. The sky was in its moods and the sky started changing colors every minute. Far in the horizon, I could make out the silhouette of the container cranes at the port. Nearly 3 million tons of cargo are loaded/unloaded at the Aomori Port every year.

I zoomed in to get a close shot of the sinking sun behind Mt. Maruyakata. Earlier passengers and cargo used to be moved on the Seikan railway ferry. Operation of the Seikan ferry ceased in 1988 when the worlds longest Seikan tunnel with 53.85 km was completed and trains were able to run 1000 meter below the sea bed between Aomori and Hakodate.

Far away in the horizon the sun said a final goodbye to the city as it went down behind Mt. Maruyakata. In a very opposite behavior, the light actually became better after the sun set. The conical shaped lighthouse looked amazing in the orange sky.

It was 7 pm and we bid our final goodbye to the white lighthouse as we head back to the hotel.

Within minutes however the light started to fade away as the Orange sky turned into a many shades of purple. The tripod was a great help in taking the next few shots.

Walking back, the ASPAM building looked even more beautiful with the lights on, in front of the Bay bridge. As we walked towards the city, we could better see the hanging Bay Bridge. The construction on the impressive bridge in the Port of Aomori was started in 1985 and all lanes were opened for traffic in 1994. The bridge is part of the traffic system essential for goods transportation in Aomori Prefecture and at the same time its impressive design makes it a beauty spot of the city.

I have seen the bridge many times during the day. It is majestic by day and picturesque in the night with its illuminated wires. At night, the lit-up bridge creates a magical atmosphere, which makes it popular among lovers. Click here if you want to see the night shots of the Aomori Bay bridge.

We sat on a bench along the breakwater, mesmerized by the happenings of the last hour or so. With not a soul around us, I could hear the soft relaxing waves and feel the natural tranquility of the surrounding bay.

It was almost 8 pm by the time we reluctantly picked ourselves up from the amazing scene that lay in front of us. We walked down to Shinmachi Street, right beside the ASPAM building, a pedestrian street full of department stores and sushi restaurants. We bought us some packed dinner that we could have back at the hotel.

This is the city’s main shopping artery and its a different kind of experience wandering at night in these streets. After a short stroll we walked back to the hotel.

It was a good choice to reserve our rooms at Hotel APA, since its walkable distance from the JR station, Wa Rasse Nebuta Museum and also the Aomori bay. The rooms and service are of high standards. If you are visiting Aomori, Hotel APA is a reasonably good place to stay.

For me, an evening stroll on the breakwater promenade was quite a romantic experience. Not only does it gives you an overview of the city, but it also involves a pleasant stroll along the stunning waterfront.  The city has a cool climate year round and enjoys clear transitions between the four seasons. I have spent many evenings in Kobe Harbor admiring the stunning Harborland, but this was magical.

Striking sunsets like these are a regular thing along the enchanting Aomori skyline. Maybe it’s the location with the city hemmed in on three sides by mountains, including, most prominently, the Hakkōda Mountains. I look forward to coming down during fall in the future to see more of its beauty.

I hope you like my post. Thanks for reading. Please do leave me a comment if you liked it or follow my story as I head to Inakadate to witness the amazing Tanbo Rice Art of Aomori. 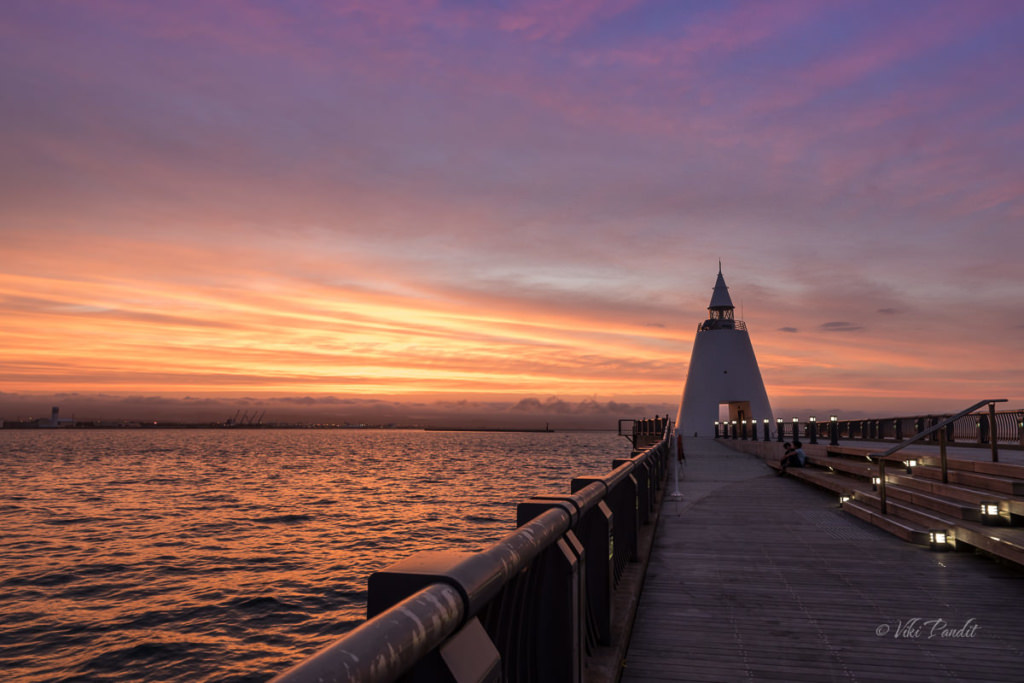