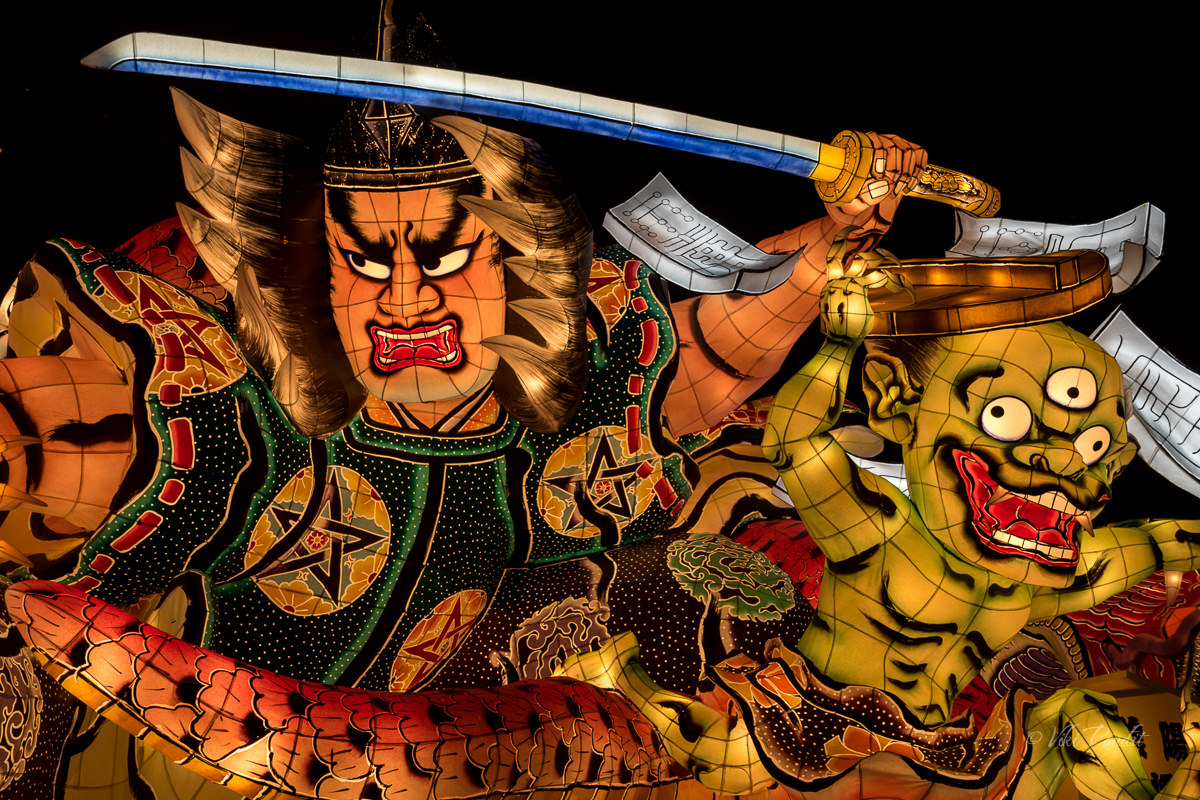 Aomori Nebuta Matsuri is one of the largest Japanese festivals in the Tōhoku region. It is held every year at the beginning of August. Unfortunately I missed it by a whisker. However there is still a ray of hope for people like us if you visit Aomori during a different period of time, you can still enjoy a part of its beauty at the Wa Rasse Nebuta Museum.

The Wa Rasse Nebuta Museum in Aomori showcases some of the most spectacular Nebuta Floats from Aomori’s annual Nebuta Matsuri. The museum is a great place to learn about the world-famous festival and everything Nebuta. It walks the visitors through the history of Nebuta and it’s importance to Aomori City.

I took the early morning 6 am Komachi Shinkansen from Akita to Morioka and from there switched to the Hayabusa Shinkansen to Aomori. It took me about 3 hours for the full ride and I reached Aomori at 9.30 am. The museum is located at a short walk from the JR Aomori Station and opens at 8:30 am in the morning.

I bought my ticket at the admission booth for ‎¥600. The ground floor does not contain many exhibits and the space is taken up by a quaint restaurant and a few souvenir shops. Here, one can enjoy views of Mutsu Bay as they feast upon delicious seafood dishes prepared at Restaurant Den.

Up on the first floor I went past a red hallway, the walls adorned with photos and images from the Nebuta Matsuri’s 400 year history.

Beyond the hallways I found myself in a large, dimly lit hall where the colorful, brightly illuminated award-winning parade floats from this year’s festival were on display in all their splendor. These are replaced each year with new winners from that year. I walked around each of the floats admiring the craftsmanship that went into their construction.

A large screen on the wall displayed scenes from the just finished festival. In one of the corners of the hall, smaller components of the floats in wire frames were displayed on stands that visitors could touch and feel.

History of Nebuta Festival in Aomori

Nebuta Floats are generally created based on scenes from Kabuki, Japanese history and mythology or some popular current affairs. The Aomori Nebuta Festival is one of Japan’s most colorful festivals but it has had a rather chequered history. The festival began in the 1600’s during the Edo period and has been banned at various times in yesteryear mainly due to the fire hazard it represented during those times when candles were used to light the paper floats. Nowadays these floats make use of electric bulbs for illumination.

The floats themselves are believed to be the result of an amalgamation of several key elements in the Nara Period (710-794): ancient Tsugaru traditions, dolls, insect-repelling torches, the sending off of ancestral spirits, and the aforementioned Tanabata Matsuri. All of these customs were brought together in the form of lanterns, at a time when the use of paper, bamboo, and candles was becoming increasingly common in society. The lanterns would eventually come to depict human figures – the original Nebuta Matsuri floats.

The word Nebuta finds its roots in the Tanabata Matsuri. The lanterns that appeared during the festival processions were known by this name, and on the actual night of Tanabata itself (July 7), they were floated down rivers or the sea, serving as both a cleansing ritual and a prayer for good health. This custom was called nebuta-nagashi, and can be seen today in the form of Aomori Nebuta maritime displays.

Many contemporary Nebuta floats depict kabuki actors – a custom which most likely began in the Bunka Period (1804-1818), when folk art was at its peak. In the past, the nebuta were quite smaller and were created in every alley. In those times the festival was more of a personal enjoyment. A festive atmosphere filled the entire town, from one corner to the next. Nebuta floats grew even larger as Japan entered the Meiji Period (1868-1912). One particular Nebuta from Hamamachi in 1871 is said to have been about 20 meters tall (the reasons for which are unknown) and carried by a hundred people. During recent years however, both the schedule and course are set and the main purpose is to have a spectacular show, showcasing the floats to festival goers.

The incredible color, intricacy and the sheer size of the floats is mind-blowing. The Nebuta floats reminded my of the similar spirit during the celebration of goddess Durga in my hometown of Kolkata.

While the Nebuta Festival in Aomori is the biggest in the area, there are many other Nebuta festivals around. So when visiting Aomori during festival time, make sure to check out the festivals in the small towns, too. Every town has its own way of building these floats. The floats in Aomori are wide, the ones in Hirosaki they are not so wide, but higher. There are some floats that also have movable parts.

As I moved on towards the exit, there is a wall adorned with many Nebuta faces, all looking down on me with extreme fierceness.

It was time for me to head out towards my next stop at Yamadera Temple. Nebuta Festival is held every year in early August, but for those who can’t make it to the festival itself, Nebuta Museum Wa Rasse offers a glimpse into the experience all year-round. The museum is a fantastic place to see the floats live and up close without having to jostle for a place in the festival streets. On weekends and holidays, there are occasional performances by “Haneto” dancers who demonstrate the unique Nebuta Matsuri dance accompanied by live music played on Taiko drums and flutes. If you are in Aomori, I highly recommend a visit to the Wa Rasse Nebuta Museum.

One thought on “Warrior dolls of Aomori Nebuta Museum” 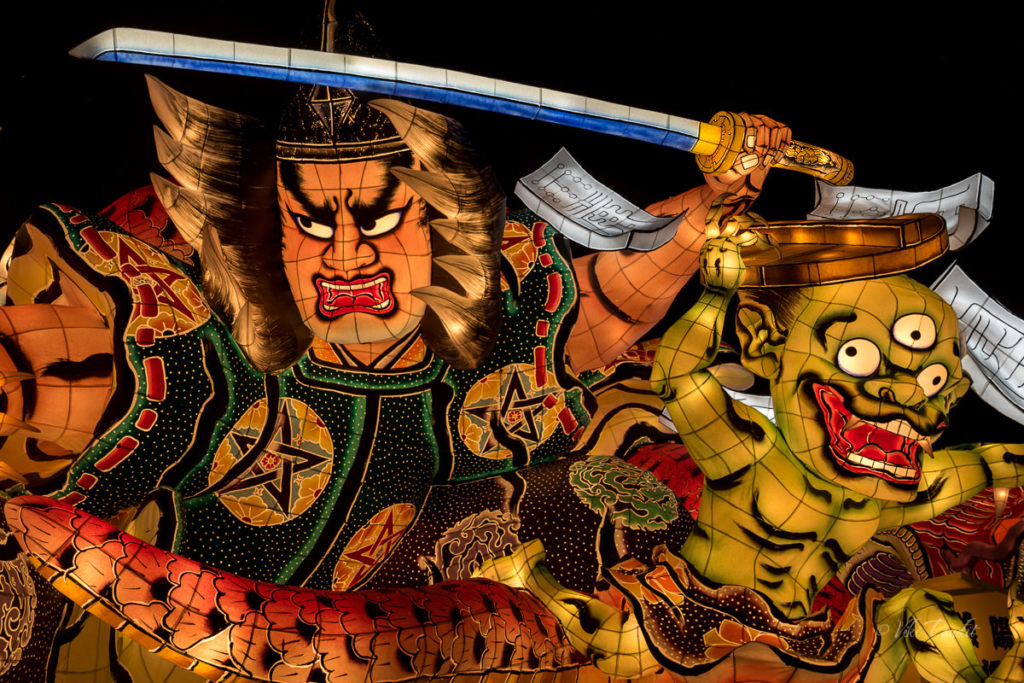