I am at Kalo Dungar, some 50 km north of Dhordo tent city, on the top of the Black Hills. The highest point in Kutch, offers a bird’s-eye view of the Great Rann of Kutch. From here, the entire northern horizon vanishes into the Great Rann, the desert and sky becoming indistinguishable on the horizon.

I and my travel companion – Mani, were staying at the Dhordo Tent city. Every year, the government of Gujarat holds a four-month-long festival known as ‘The Rann Utsav’ starting from November to February. The stay at the Tent city includes a free bus tour to Kalo Dungar.

The route to the hill is not very clearly marked. It is best to visit Kalo Dungar before sundown to avoid getting lost on the secluded roads leading to the hill. Our driver, though being a local, got lost twice and had to backtrack to get the bus back on the correct route. Although if you do get stuck at the hill, there is a dharamshala at the top where you can find shelter and basic food.

Even at 462 meters, the hill can still pose a challenge to the novice driver with roads inclined at very steep angles. Halfway up the hill, for a moment the bus driver almost gave up looking at the steep terrain.

Eventually, after a lot of coercing, laced with encouragement from fellow tourists, the bus reached the parking zone, which lies a little distance away from the top. From here local jeeps took us to the peak for Rs. 20 per head. It’s not much of a distance, probably just a way to allow the locals to make some earnings.

While going up, looking down from the back of the jeep, I realized that no bus would have made the drive to the peak. The jeep dropped us off in front of the Dattatreya Temple.

Just opposite the temple lies an Army outpost. This is one of the places where a civilian can get closest to the Pakistan border,  and there is tight security around the hill.

The hilltop is also the site of a 400-year-old temple to Dattatreya, the three-headed incarnation of Brahma, Vishnu, and Shiva in the same body. Many fables and tales are associated with the history of the Kalo Dungar. One of them says that Dattatreya happened to pass by this hill while walking on the earth. While admiring the barren landscape, he found a band of starving jackals. He offered them his body to eat and as they ate, his body continually regenerated itself.

Some people differ saying that it was actually a holy saint named Lakkh Guru, a worshiper of Dattatreya who used to live there in an ashram. One day a pack of wild jackals appeared in his ashram and stood expectantly in front of him. When he realized that they were famished, he offered them a simple meal of rice and dal, the staple diet of his ashram. Since that day the jackals started coming each day, day after day.

Because of this, for the last four centuries, the practice of feeding jackals still continues to this day. The priest of the temple prepares food and serves it to jackals every morning and evening, after the aarti (praying).

Beside the temple is a makeshift tent selling Gujarati handicrafts and traditional dresses.

From here we were on foot, making our way upwards towards the topmost viewpoint. People with a disability or just plain unfit can avail the use of beautifully dressed Camels, who can carry them to the top.

The road though steep, is an easy walk and we were hardly challenged as we reached the top viewpoint within a few minutes.

In the distance, despite the haze, I was still able to make out the rectangular salt fields. These are the lands of the Agariya tribe, traditionally salt farmers, who have lived here for centuries. Working every day under a scorching sun from mid-October to June, the Agariyas harvest almost 75 percent of India’s overall salt produce.

Across the Black Hills, staring into infinity, one can realize the tremendous effort of the Sindh merchants, who undertook the crossing of the Great Rann for trade in the olden times.

Why is the Kalo Dungar called Black Hill

Well here is another interesting story. It is intriguing why the locals refer to this hill as the Black hill. There is not a point on the hill that is remotely associated with that color.

Though not literally black, the hill is known so because, in olden times, the merchants returning to Kutch from Sindh used to be guided by this lonesome hill in the grim desert, which used to appear black either because of the shadow cast by the sun or because of the dense forest cover. Just like the North Stars guides the lost people at sea, Kalo Dungar used to act as a marker so the caravans of people crossing the desert would follow it to understand their location.

There weren’t many tourists at the top. A cemented platform with makeshift benches provided relief to those who had tired from the climb. A small structure stood below us shaped like a hut with the words “Suswagatam” painted, which means “welcome” in Hindi.

We wandered around immersed in the beauty of the surrounding. Local kids in their teens would, from time to time, come around offering tea. A few of the brave-hearts had ventured beyond the cemented platform into a narrow trail that went further to the edge of the hill.

The Sun gradually slipped into oblivion. After taking a few shots of the picturesque landscape we started walking back towards the bus.

Twilight at Kalo Dungar. The India Bridge can be seen on the left if you zoom in to the scene

While driving back, there was a section on the road which our guide brought attention to. He reported that in that 4 km stretch of the road, vehicles roll down in neutral gear at speeds of 70-80 km/hr.

However, a quick search on the internet informed me that the movement of the vehicle is only because of the steep slope and there was no anomaly causing it. Experts from the Indian Institute of Technology (IIT), Kanpur and Institute of Seismic Research (ISR), Gandhinagar have concluded that vehicles suddenly gain speed in the descent only because of the steep slope. So much for the magic theory.

Going back was thankfully devoid of any adventure and we reached Dhordo in an hour’s time.

Kandva village is the closest inhabited village which is located around 25 kilometers from Kalo Dungar. Reaching the hilltop by public transport is difficult; the only bus travels there from Khavda on weekend evenings and returns in the early morning. Hiring a jeep from Khavda is the better option. Bhuj is almost 90 km away and a day tour from Bhuj would be quite taxing.

People who want to see the Great Rann of Kutch from a different perspective must head up to Kalo Dungar. In my opinion, staying at one of the resorts in Dhordo is the best option for enabling a good experience of Kalo Dungar. The drive takes about an hour and one can stay a bit late after the sunset and still make it back to the resort quickly.

Thanks for reading. Please leave me a comment if you liked the post or follow my story as I visit Mandvi Beach on the Arabian Sea. 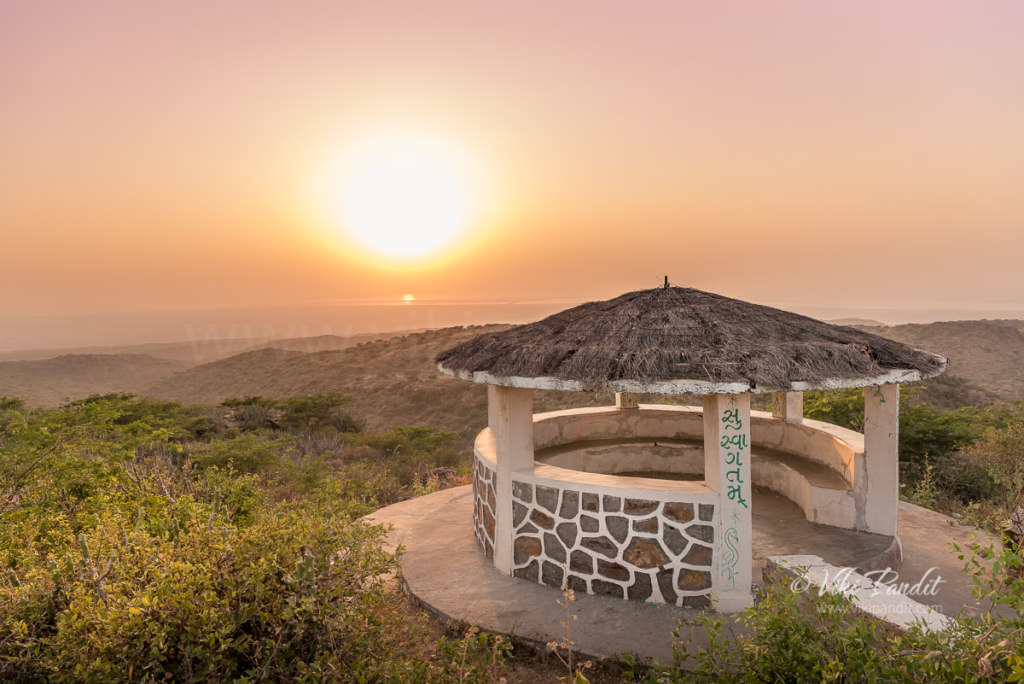 Places to see near Kalo Dungar