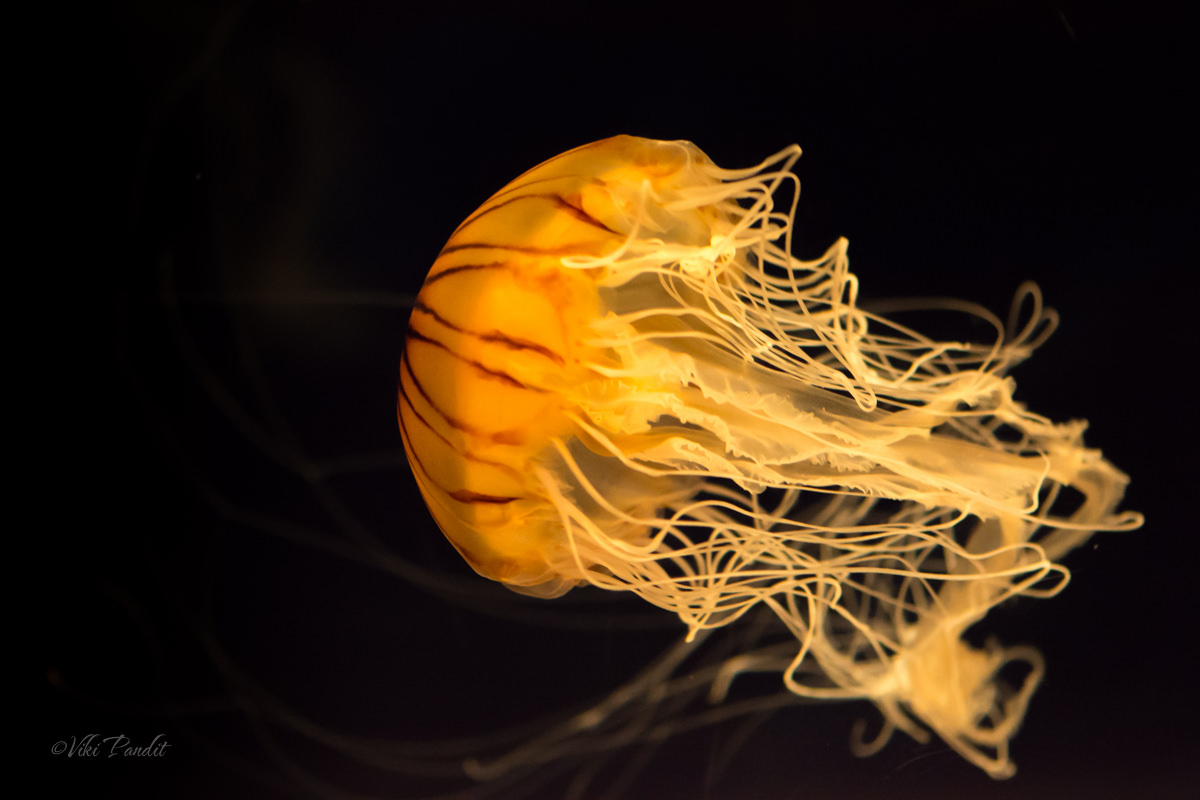 The freezing cold of previous week was gone. The Nara sky was again an endless blue and, even though it was a work weekday, we just couldn’t let this awesome weather go to waste. We still had the Surutto Kansai Pass with us. So we decided to go explore some incredible creatures of the sea at Osaka Aquarium Kaiyukan.

The Surutto Pass does not cover any JR trains, so we took a train from Kintetsu Nara Station to Osaka Namba. From there we made a short halt at Umeda. From there we took the Osaka Subway Midosuji Line to Hommachi. At Hommachi, we transferred to the Chuo line to Osakako station. We disembarked from subway at Osakako station and walked down to the Osaka Kaiyukan which is about a 10 minute walk away.

As we neared the Aquarium, we found the huge, red-colored, Tenpozan Ferris Wheel looming over us. Its one of the larger wheels I have seen to date. Definitely bigger than the one we rode on in Rinku Town. The Red and Navy colored, Kaiyukan Aquarium is just next to Tenpozan wheel. It was already 2 pm so before entering the Aquarium, we stepped inside the food court to grab some lunch. I had a large bowl of French Fries and Mani got herself a plate of Pasta.

After lunch, we headed towards the Kaiyukan Aquarium. The Kaiyukan (海遊館) is one of the most famous tourist attractions in Osaka. Conceived in 1990 by Peter Chermayeff, it holds some 580 species of marine life. The Japanese name, Kaiyukan literally means ‘Playing in the Sea Pavilion’. The aquarium is enormous and holds various exhibits from the Pacific. Mani got the tickets while I took some pictures of the Aquarium building. Admission tickets cost us 2300 Yen each.

The tour begins at the Aqua Gate – a tubular ceiling aquarium of colorful fishes. From the tube, we came out from the other end into a replica of a Japan forest. In the Japan Forest section we saw a few Asian small-clawed Otters having fun in an artificially created waterfall. From the open area, we went down a series of steps into a long spiral path.

The aquarium is a 7-storey structure with various exhibits centered around a large central tank that spans the entire height of the building. The central tank itself holds about 11,000 tons of water. We started the tour on the top floor and made our way down the building in a spiral around the central tank. The upper sections of the building holds some land animals as well. We passed an Otter, some penguins from Antarctica and a bunch of Sea Lions. Luckily for us it was Sea Lion feeding time and they were performing. It was a Wednesday afternoon and we yet had  this massive crowd in front of us. After enjoying the performance, we moved along the route towards the fish tanks. Right after the Sea Lions is a tank full of colorful fishes from the Great Barrier Reef. The various tanks along the path harbor over 480 different types of fish, most I have never heard of. Some like the Hammerhead, I remember reading about from my heavy Encyclopedia book in my school years.

The Pacific Ocean tank is the largest and holds Kaiyukan’s largest species. A whale shark called Kai-kun, the world’s largest fish, can be seen at this part of the aquarium, with other equally fascinating fishes like the hammerhead shark and the giant sting rays from the Pacific Rim. The spiral path took us around the Pacific tank and we were able to observe marine life from different depths and perspectives. Towards the bottom of the central tank some seats are set up. I sat there looking at the impressive display of aquatic life. It was extremely relaxing.

Mani asked me why they are kept together, wondering about the smaller ones that could be consumed by the bigger fishes. Well, the theme of the aquarium is based on James Lovelock’s Gaia principle that proposes that organisms interact with their inorganic surroundings on Earth to form a self-regulating, complex system that contributes to maintaining the conditions for life on the planet.

After some soothing moments in front of the Pacific Ocean tank, we went deeper inside to the lower depths of the aquarium. Arguably the most magical part of the Kaiyukan is the floating Jellyfish section which displays a wide collection of jellyfishes. I am just out of words to explain the excitement that was flowing through me when I laid eyes on those beautiful and tender creatures. After taking some macro shots of the jelly fishes, we headed up an escalator.

Up the escalator is an open pool with a couple of Ringed Seals from the Arctic. Snow was spread out beside the pool and the seals were having a fun time swimming. Beyond the pool we reached a big fish tank which contained sharks and stingrays from the Maldives. They allow people to touch the fish in this tank with a warning of not to touch the Rays’ tail and the Shark’s mouth. I folded up my sleeves and felt the sting-rays back. It was soft as velvet.

Just before the exit, there is a big gift shop where you can buy cute stuffed animals and souvenirs. I had great fun watching everything from dolphins playing in the water, penguins community gathering, huge Japanese crabs, jelly fish floating up and down, and so many other interesting marine life. Watching all the lovely colorful sea creatures swimming around in larger-than-life tanks was overwhelming. In my opinion, 3 hours is a minimum to see this huge aquarium.

By the time we exited the aquarium the sun had set into a cold evening. The aquarium and the area around us was illuminated in beautiful blue lights. The Osaka Aquarium is one of the most interesting aquarium exhibits in the world. We walked towards the Tenpozan Ferris Wheel lit up in multi-colored lights.

In 1997, the Tenpozan Ferris Wheel opened and was established as the world’s largest Ferris wheel. It held the record for two years until 1999, when the Cosmo Clock was built in Yokohama. Along with the aquarium and its exhibits, visitors also come to enjoy a ride on this giant wheel. The Ferris wheel is 100 meters in diameter and reaches just over 112 meters high.  For 700 Yen you can enjoy the spectacular views from this phenomenal Ferris wheel.

It was late evening and my back was aching from lugging the tripod all day. But the excitement of the aquarium egged me on and we went for a light stroll at Cosmo Square waterfront. It’s just one station from Osakako.  One can see the beautiful Osaka skyline from here. The wind was strong and cold. My fingers were freezing as I took some shots of the Tenpozan Ferris Wheel from here. After chatting on the water-front for about half an hour, we headed back to Nara. 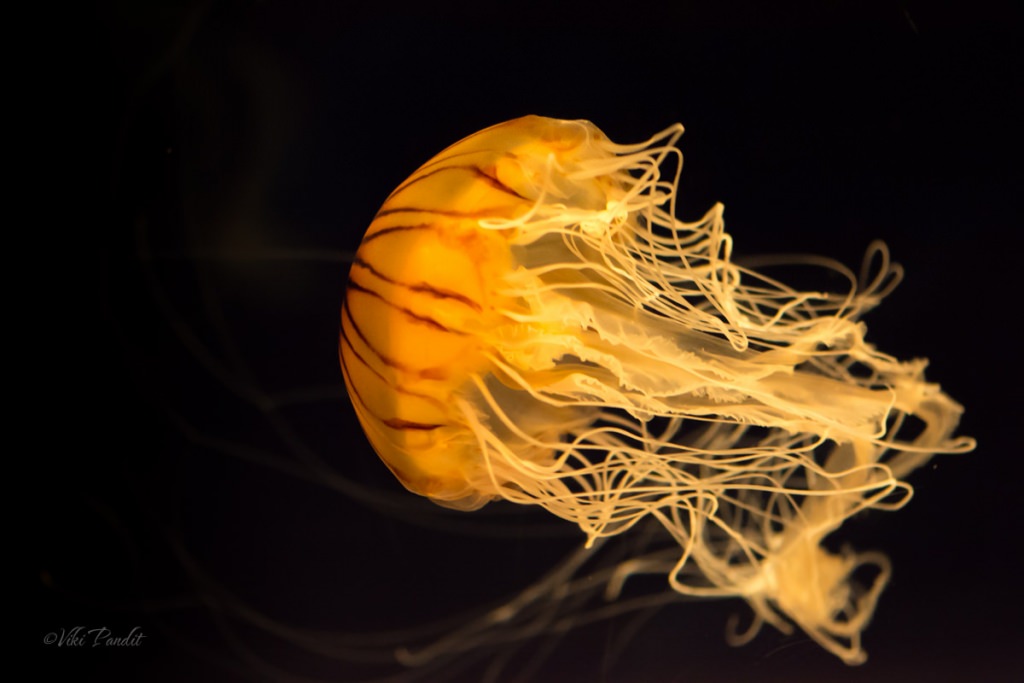 Places to see near Osaka