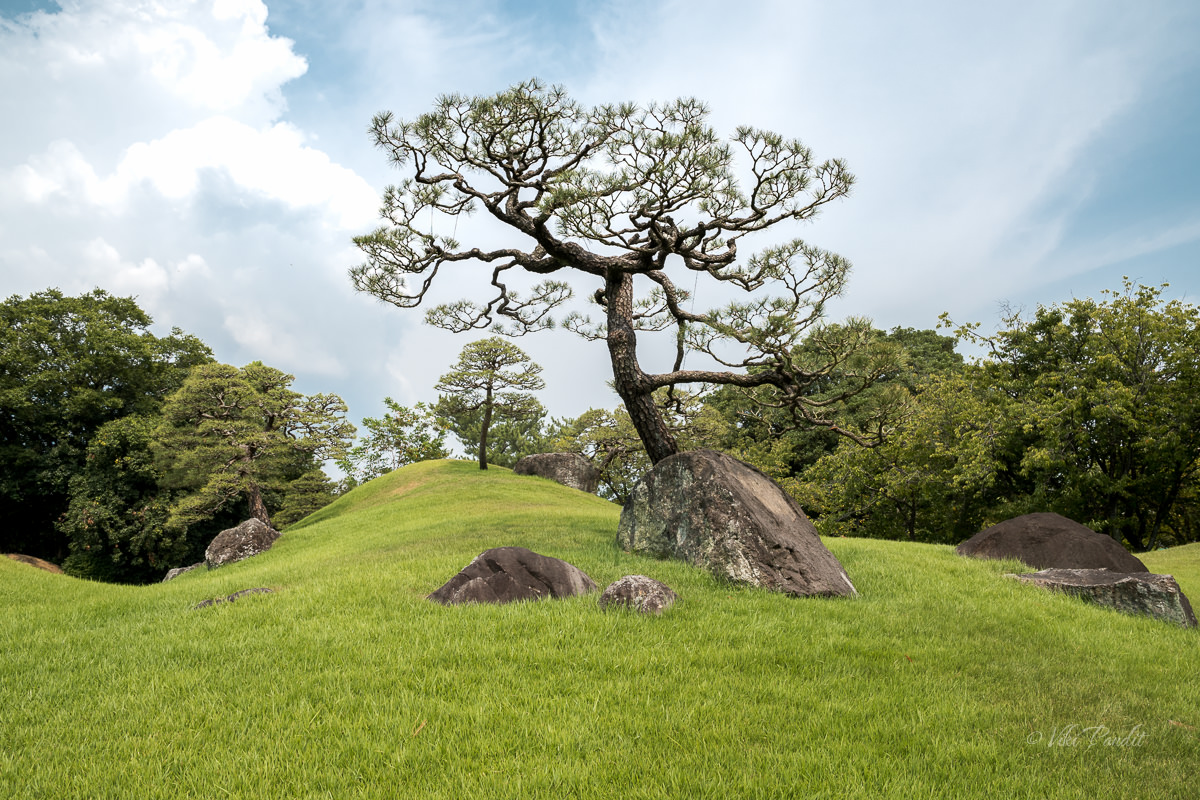 Today I traveled to Kumamoto almost 750 km away, to visit the lovely Suizen-ji Garden.

Suizenji Garden (水前寺成趣園) is a Japanese style landscape garden in Kumamoto. The garden is named after a Buddhist temple Suizen-ji that no longer exists on the grounds. The origins of the garden go way back to 1632, when Tadatoshi Hosokawa, the administrator of Kumamoto, built the Buddhist temple Suizenji. It was completed by 1670 and named Suizenji Jojuen which means “Garden of Elegance”.

From Nara I took the local train up to Osaka. From Osaka I had to take another change-up to Shin Osaka, since bullet trains don’t have a stop at Osaka Station. From Osaka, I took the Hikari Shinkansen to Kumamoto. it’s a 5 hour ride even on the bullet train. A long ride like this can cost a fortune, but I was carrying my JR Pass. With the JR Pass I can travel unlimited number of times, anywhere in Japan on the JR line trains. It has been a great asset on my travels throughout the land of the rising sun.

The weather kept changing from a bright sunny to rainy and then misty as I passed prefecture after prefecture.

Inside the Shinkansen area of the Kumamoto Station, a huge face of Kumamon, the official mascot of Kumamoto welcomes you to the city. The Kumamon was unveiled in 2010 with the opening of Kyushu Shinkansen in order to promote tourism within the region. The mascot’s character is inspired by Kumamoto – the prefecture’s name literally translates into “bear origin”.

From the bustling station of Kumamoto, I changed to the local Hohi line, that dropped me off at the Shin-Suizenji Station. The train bound for Suizenji, leaves at regular intervals of 20 minutes and costs ¥‎210. Those with JR Pass can avail this ride for free. From the station however, it is still a 15 minute walk to the park.

Google maps was playing up and it led me on a round-about way to the park. After a bit of searching I was finally able to find the entrance. A sweet lady dressed in Kimono provided me the admission tickets that cost ¥400.

Just beside the entrance one can find an Inari Shrine. A series of red Torii gates lead up to the shrine. Some of the Hosokawa family members are enshrined here.

In Japanese mythology, Inari is a god primarily known as the protector of rice cultivation. The fox, symbolizing both benevolence and malevolence, is sometimes identified with the messenger of Inari, and statues of foxes are found in great numbers both inside and outside shrines dedicated to the rice god.

After paying my respects at the shrine, I walked up the beautiful garden path lined with an array of miniature man-made hills. Just opposite to the shrine there is a miniature hill, made to look like Mt. Fuji.

Along the path, I crossed a small arched bridge to reach a pond filled with Koi fish. Three tiny islands float in the middle of the pond. The pond is fed by spring water from Mt. Aso, an active volcano in central Kyushu. As I went near the edge of the pond to feel the crystal clear cold water, a school of colorful Koi swam towards me searching for an afternoon snack. Unfortunately for them, I didn’t have any.

A few paces ahead I came across the thatched Kokin-Denju-no-Ma tea-house which was moved from Kyoto’s Imperial Palace to Kumamoto in 1912. A couple of Japanese were sitting inside. The tea house opens towards the pond. For people sitting inside the tea-house, the lovely pond looks like a picture frame. Pigeons were walking around just outside the tea house. A crane stood on rocks in the middle of the pond, making the scene even more exquisite. It’s a perfect place to relax and let the mind wander.

With the relentless Japanese summer sun beating down against my skin, I moved on, beyond the tea house, towards the beautifully trimmed pine trees on the other side of the pond.

It is said, the garden was landscaped to give the impression of views seen when traveling along the Tokaido, the 12th century highway between Kyoto and Edo (present-day Tokyo) .

The path up ahead, lined with an array of small green mounds are sure to please any nature lover. At Adachi Garden, I had made up my mind that it was the most beautiful garden. However Adachi Gardens can only be viewed from behind glass windows, so the feel of walking in such a beautiful garden just tilts my judgement towards Suizen-ji. The historical aligned, beautiful landscapes of this garden have led to it being acknowledged by the Japanese government as a site of historic and natural beauty.

Walking through, I came back a full circle back to the Shinto Shrine. On the right there are two statues of Fujitaka Hosokawa with Tadatoshi Hosokawa.

The garden covers an area of about 15 acres, reproducing the 53 post stations of the Tokaido, including the miniature Mt. Fuji, I saw earlier. Before I end the article, I want to share this most beautiful section of the entire park.

The garden is also home to a Noh theater, where Noh is performed in spring and fall ceremonies. It also contains the Izumi Shrine, built in 1878 and dedicated to the Hosakawa family.

It was evening, and I had about 6 hours ride in front of me to reach home. So, I went back to the Kumamoto station and caught the Shinkansen from there back to Shin Osaka.

The Hikari Shinkansen operating between Shin Osaka and Kumamoto

As I made my may back to Nara, the lovely garden with its picture-postcard beauty kept lingering in my mind. The beautiful dusk only made my experience of the day richer.

The Garden is a slice of history and beauty put together in a tasteful combination. The Suizen-ji Garden is a must visit for anyone who loves nature and appreciates the cultural and historical aspects of Japan.

Ikinaridango: a mochi (rice) and bean paste cake which is popular in the Suizenji area 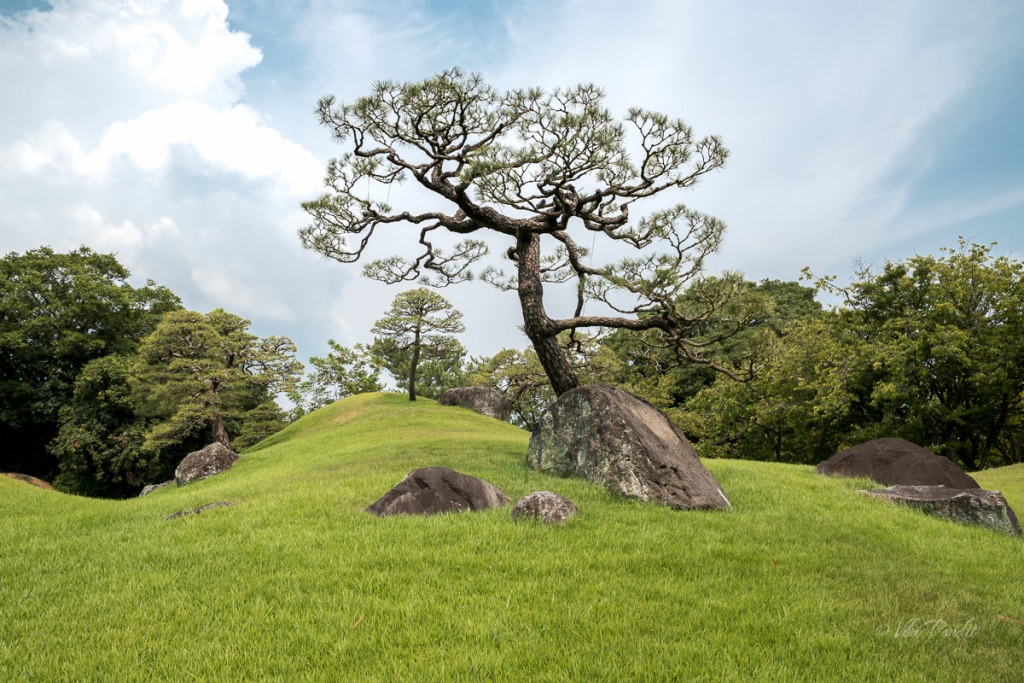 Places to see near Kumamoto