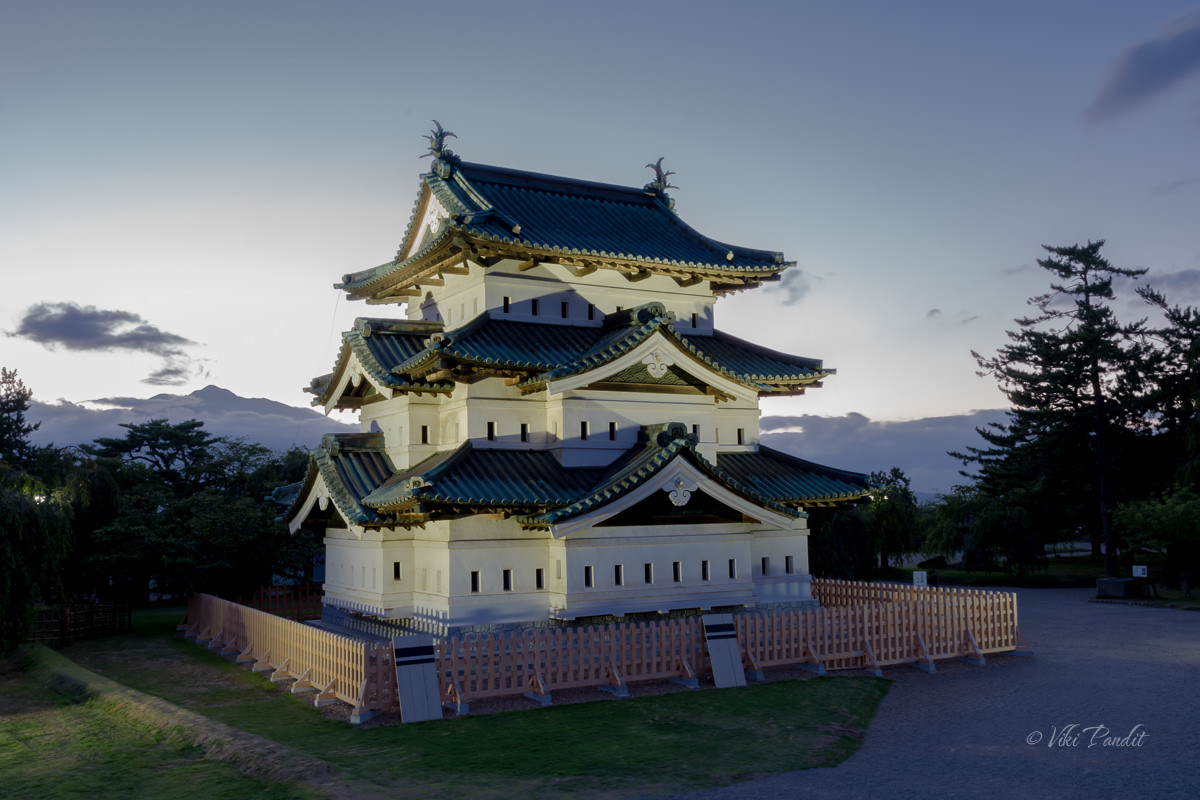 After a lovely time at the Tambo Art fields, we set off for one of the most beautiful castles in Tohoku region. Hirosaki Castle (弘前城) is a hirayama-style Japanese castle constructed in 1611. The present tower however was rebuilt in 1810 in the late Edo period (1603-1867) after a fire destroyed the original in 1627. It was the seat of the Tsugaru clan, who ruled over Hirosaki domain in the Mutsu Province, now known as central Hirosaki in Aomori Prefecture.

From Tamboato Station, we took the local to Onoekoko-Mae Station and from there another train on the Konan Line all the way to Hirosaki Station. It doesn’t take long to cover the distance, but the trains are scheduled at wide intervals and it was almost 5 pm by the time we reached Hirosaki Station. Originally opened in 1894, the present-day facilities at Hirosaki Station were completed in 2004. A bus terminal lies just outside of the train station.

Did you know: Besides rice, the Hirosaki region accounts for nearly a fifth of Japan’s apple production. They’re the best you’ll find in Japan, so enjoy some while you’re there.

Hirosaki is renowned for its agricultural produce. The Hirosaki area has been populated since the Heian Period (794 – 1185). The city has been renamed several times over the course of history. Its current name was adapted in 1808 from its former name, Takaoka. With its humid continental climate, summers in Hirosaki are hot, reaching a daily average of 23°C in August, while winters are mild in comparison.

The castle is open to visitors only from 9 am to 5 pm. But we were short on time on the next day and the castle grounds remains open till late, so we decided to go down anyway.

We love to walk, so from the station we walked down all the way to the Castle. If you are not in the mood for a walk, one can also take the 100-yen Dotemachi Loop Bus and get off at Shiyakusho-mae stop to reach the castle. That is the most convenient way to reach the castle, via the Otemon Gate located near the Hirosaki City Hall.

After a brisk walk, we reached the Sannomaru Otemon Gate in about 20 minutes. From the Sannomaru-Otemon-Gate, it’s another 10-minute walk to the castle across the vast Hirosaki Park.

The park surrounding the castle is open all round the year, but the castle itself is closed during the winter period from October 24th, until the end of March. Light was gradually failing as we walked past the Kitanokuruwa North Gate. Since it was way beyond 5 pm, we weren’t charged any admission fees for viewing the castle.

The Kitanokuruwa North Gate leads to a wide path surrounded by trees on both sides. The Hirosaki Park is home to over 2600 trees with over 50 different types of cherry trees. The Somei Yoshino cherry is the first to bloom every year, followed by the Shidarezakura (Weeping Cherry), then finally the Yaezakura (Double Layer cherry). The cherry blossoms at Hirosaki Castle are unique as each branch produces more flowering buds due to a special pruning technique.

Hirosaki Castle is a symbol of the city, and has a truly long history. During the late Sengoku period, Ōura Tamenobu was awarded 45,000 koku by Toyotomi Hideyoshi for his role in the Battle of Odawara in 1590. At the Battle of Sekigahara, he fought alongside Tokugawa Ieyasu, who subsequently rewarded him by making him lord of Hirosaki Domain increasing his revenues to 47,000 koku. In 1603, Ōura Tamenobu changed his name to Tsugaru and started work on Hirosaki Castle. He was the first of the Tsugaru feudal lords who established his rule over the Tsugaru area in the early 17th century. He died in 1607 and work on the castle was put on hold until his son Tsugaru Nobuhira restarted it in 1610.

The second lord, Tsugaru Nobuhira, completed the Hirosaki Castle in 1611. However, in 1627, the 5-story tenshu, was struck by lightning and destroyed by fire. They tried to rebuild the castle but were prohibited by the then prevailing law that forbid more than one Castle per Province. It was not until 1810, when the present 3-story structure was erected, but at the southeast corner, rather than the original southwest location. The new 3 level keep is actually just the renovated Ninomaru tasumi yagura watchtower.

After walking across the vast Hirosaki Park, we finally reached a small red bridge across a moat.

From the pictures I had looked on the internet, this was the very bridge from where people usually capture the iconic view of Hirosaki Castle, with the diminutive castle perched on the corner of its motte, overlooking the hundreds of cherry blossom trees surrounding it. However, during our visit we couldn’t find the castle where it was supposed to be. As we went up the bridge to the top, I realized that the entire castle had been moved approximately 100 meters to the northeast.

I later found out that because of the deteriorating stone walls, the the 14.4-meter-high, 400-metric-ton structure, was placed on a wheeled sled and moved very slowly over a three-month period in autumn 2015. Work is currently going on to repair the walls and the tower should be returned to its original position in 2021. So if you are visiting before that, get prepared to be shocked like me.

Fun Fact: The tower was also moved in 1897 to restore collapsed stone walls. Those repairs was completed in 1915, almost exactly 100 years ago. I wonder how they did it.

We were finally in front of the petite castle. A wooden structure lies in front of the castle that provided me with a good viewpoint to capture the antique castle with the beautiful Iwate mountain in the background.

The current donjon of the castle was completed in 1811 by the 9th daimyō, Tsugaru Yasuchika. The structure is comparatively smaller than early Edo-period varieties of donjons, and it was built on a corner of the inner bailey on the site of a yagura, rather than the stone base of the original donjon. The small size was partly due to the restricted finances of the domain towards the end of the Edo period, but its location and design were also intended to alleviate concerns which might be raised by the Tokugawa shogunate should a larger structure be built.

In 1937, the remaining eight structures of the castle received protection from the government as “national treasures”. However, in 1944, during the height of World War II, all of the bronze in the castle, including roof tiles and decorations, were stripped away for use in the war.

In 1950, under the new cultural properties protection system, all surviving structures in the castle (with the exception of the East Gate of the 3rd Bailey) were named National Important Cultural Properties. In 1952, the grounds received further protection with their nomination as a National Historic Site. In 1953, after reconstruction, the East Gate of the 3rd Bailey also gained ICP status, giving a total of nine structures within the castle with such protection.

It was late, so we went back the same way passing the now illuminated Kitanokuruwa North Gate.

After a wonderful evening at the Hirosaki Castle grounds, we walked back to the station to catch the train to Aomori Station.

Walking back to Hirosaki Station

It was almost 9 pm by the time we reached Aomori Station. Luckily for us our Hotel was a just a couple of minutes away from the station.

The stores had all closed by then and the streets wore a deserted look, so we went back to the hotel.

Hirosaki is one of my favorite castles. Even though the main keep is not very spectacular and there is less stonework compared to Osaka castle or Matsumoto castle, the building is unique. What it lacks in scale and grandeur, it makes up for in authenticity being a real Edo era castle and not a reproduction. The layout of the castle grounds and moats are perfectly preserved making it a unique experience. I sure hope to go down again if I am ever back in Japan during hanami. I had a really great time witnessing one of the more artistic castles and now for a good nights sleep 🙂 Tomorrow we leave for Akita.

Apart from Hirosaki castle, Aomori has many more interesting places to explore like the Wa-Rasse Museum, Aomori Bay and the monumental Showa Daibutsu. You can also go up the Aspam building to witness the beautiful city at night.

Thanks for reading. Please leave me a comment if you liked the post or follow my story as I visit the lovely lady of Tazawa lake. 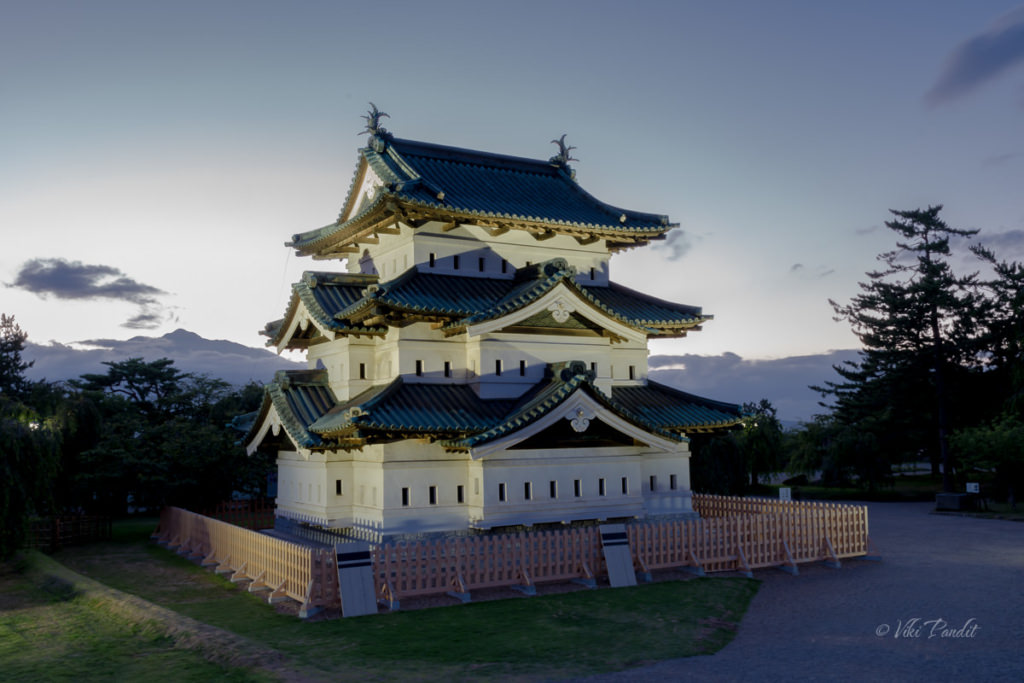 Places to see near Hirosaki-shi